South African president says ruling ANC has not given him an adequate reason why he should leave office. 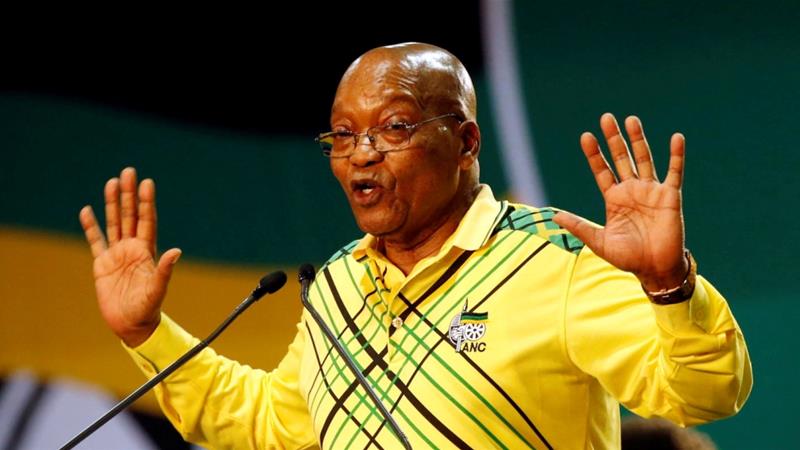 Durban, South Africa – Embattled Jacob Zuma has hit back at calls to step down as South Africa’s president, saying the ruling African National Congress (ANC) had not given him an adequate reason why he should leave office.

His comments on Wednesday, his first after weeks of silence, came as the ANC threatened a no-confidence motion if he did not resign by the end of the day.

Speaking to state television, Zuma said he would not quit and could not understand why the party’s leaders, who had met with him on Tuesday, were so insistent on pushing him out.

“I was asking [in the meeting with ANC leadership] what have I done? What is this hurry? I found it very strange to be told by my organisation that I must go,” Zuma, 75, said in the long-winded interview.

The remarks capped an extraordinary day in South African politics.

First, in the early hours of Wednesday, an elite police force raided the homes of the Gupta family, who are accused of wielding undue influence on Zuma.

Through Zuma, the Guptas are said to have been privy to sensitive state information and enjoyed access to ministers, including playing a role in hiring and firing them.

Later in the day, the ANC announced that it would back a motion of no-confidence against Zuma on Thursday, and replace him with Cyril Ramaphosa, who was elected as head of the party in December.

Paul Mashatile, ANC treasurer general, said “a new era” was about to begin.

“The conference of ANC (in December) has created new hope,” he told reporters. “Our people want to see change. We want to go with renewal.”

Meanwhile, Mmusi Maimane, the leader of the opposition Democratic Alliance party, called on South Africans to assemble outside parliament on Thursday.

“Bring everyone. Let’s remove Jacob Zuma,” he wrote on Twitter.

“Gather in your numbers, business, civil society and religious bodies. It’s time for our nation to move on from Zuma.”

Zuma has been under intense pressure to step down ever since Ramaphosa, South Africa’s deputy president, became the ANC’s leader.

The ruling party has maintained that the president had done nothing wrong and that recalling him was a question of avoiding two centres of power, with Ramaphosa as head of the party and Zuma the president of the country.

But Zuma said he did not agree with the party’s decision, insisting there was no basis for asking him to step down.

“It was very unfair to me that this issue is raised,” he told state broadcaster SABC. “Nobody has ever provided the reasons. Nobody is saying what I have done,” he added.

“We have a lot of resolutions to deal with [as the ANC], but we are spending so much time with ‘Zuma must go’. I don’t understand what’s the rush.”

Zuma, whose second term ends next year, became president in 2009.

His time in office has been marked by a string of corruption allegations. Zuma has repeatedly claimed his innocence and said the move to push him out did not augur well for the party.

“I think we are being plunged into a crisis that we will regret,” he said.