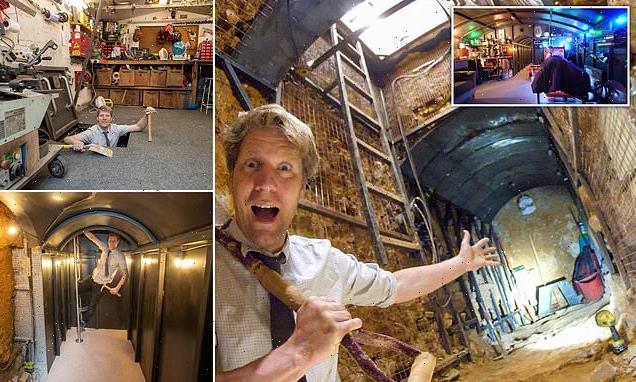 Dig for victory! YouTuber who spent three years building a 50ft TUNNEL under his garden from his house to his subterranean ‘man cave’ WINS planning war with council meaning he can KEEP it

A YouTube personality known for his unorthodox inventions has been granted planning permission for a tunnel under his garden.

Colin Furze, who lives in Stamford, Lincolnshire, only submitted a planning application for the 50ft tunnel to South Kesteven District Council in April – although he began digging in November 2018.

The project was initially a secret, but he posted his first YouTube video to announce the development in June 2021.

Described in his own words as having a ‘constant disregard for health and safety’, Mr Furze has documented his progress on YouTube in a series called ‘digging a secret tunnel’ which consists of nine parts so far.

The film-maker wrote on YouTube that he plans to use the tunnel to connect his workshop to his house and to an underground bunker that he created in 2016.

He received planning permission for the bunker eight years ago, but began constructing the huge connecting tunnel unbeknownst to local authorities.

The bunker is described by Furze as the ‘perfect man cave’ and contains a bedroom, drumkit and a media centre with a large TV and several games consoles.

In his videos, he can be seen digging the enormous tunnel to the bunker by hand using primitive tools, with his most successful video of the series gaining almost 10 million views. 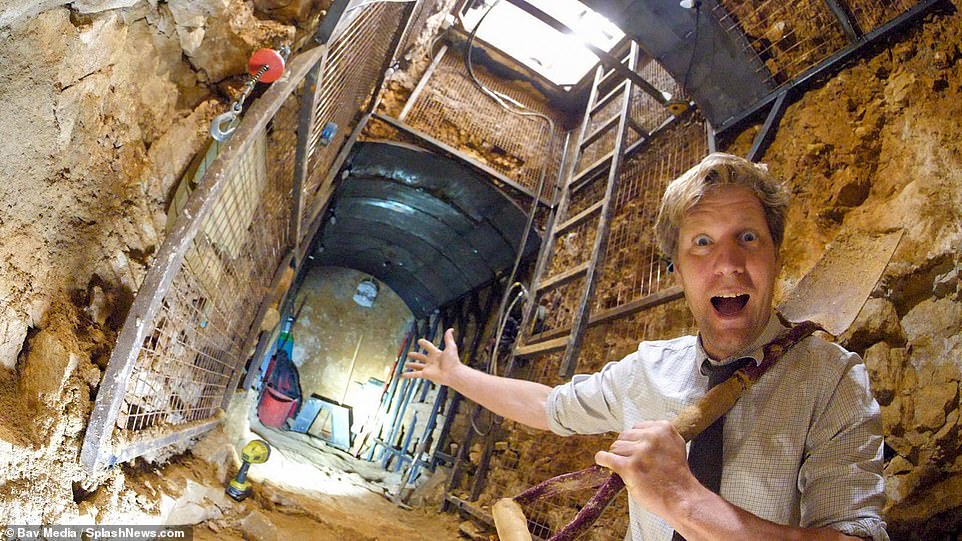 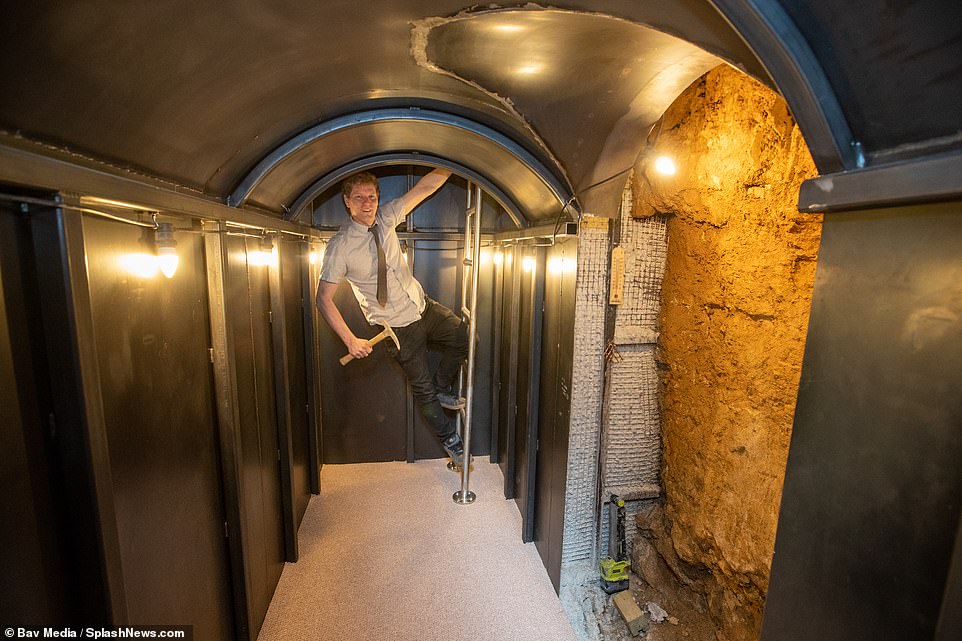 He began building the tunnel to the bunker in 2018, but the council sent a planning inspector to his house after seeing videos about the project posted on YouTube 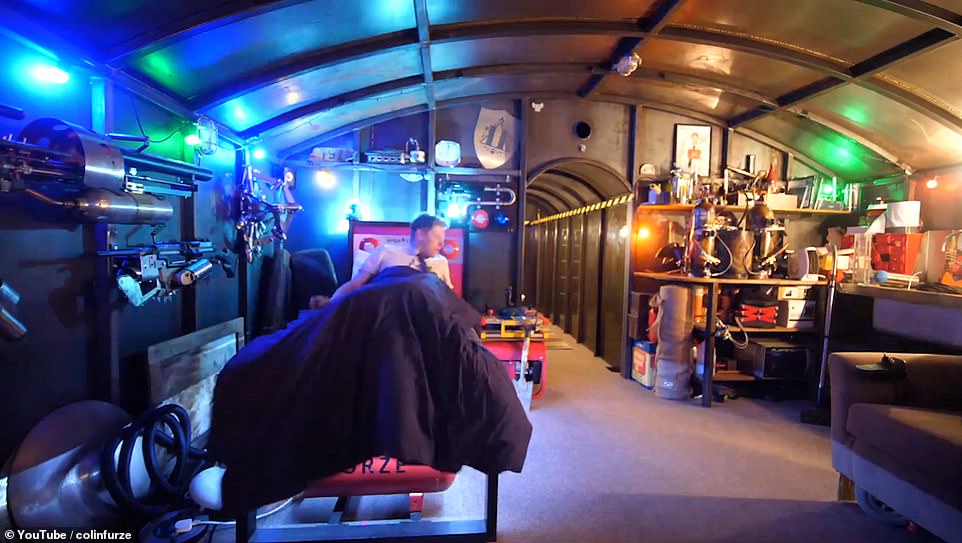 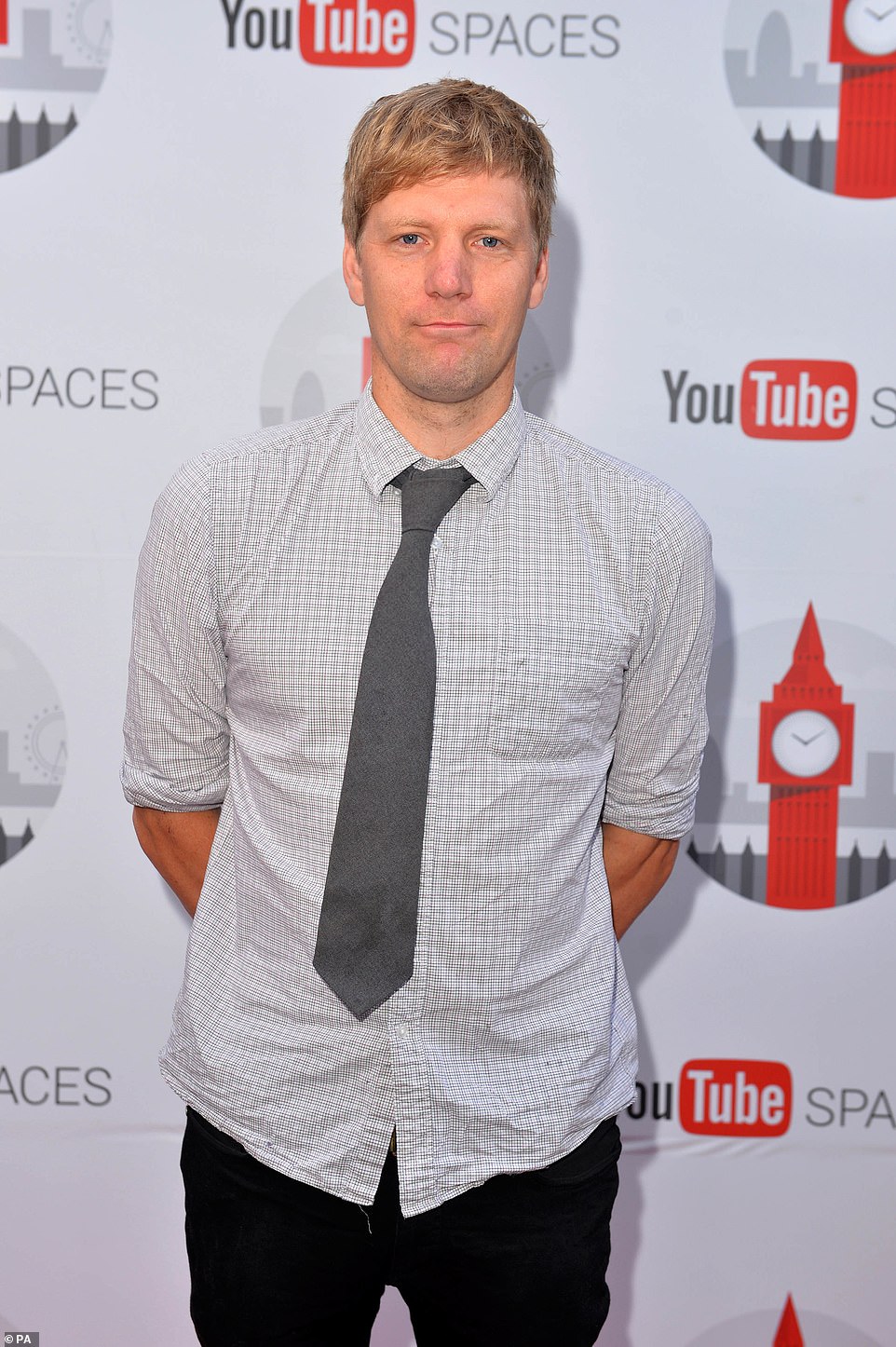 Colin Furze known for his unorthodox inventions, who has been granted planning permission for a tunnel under his garden 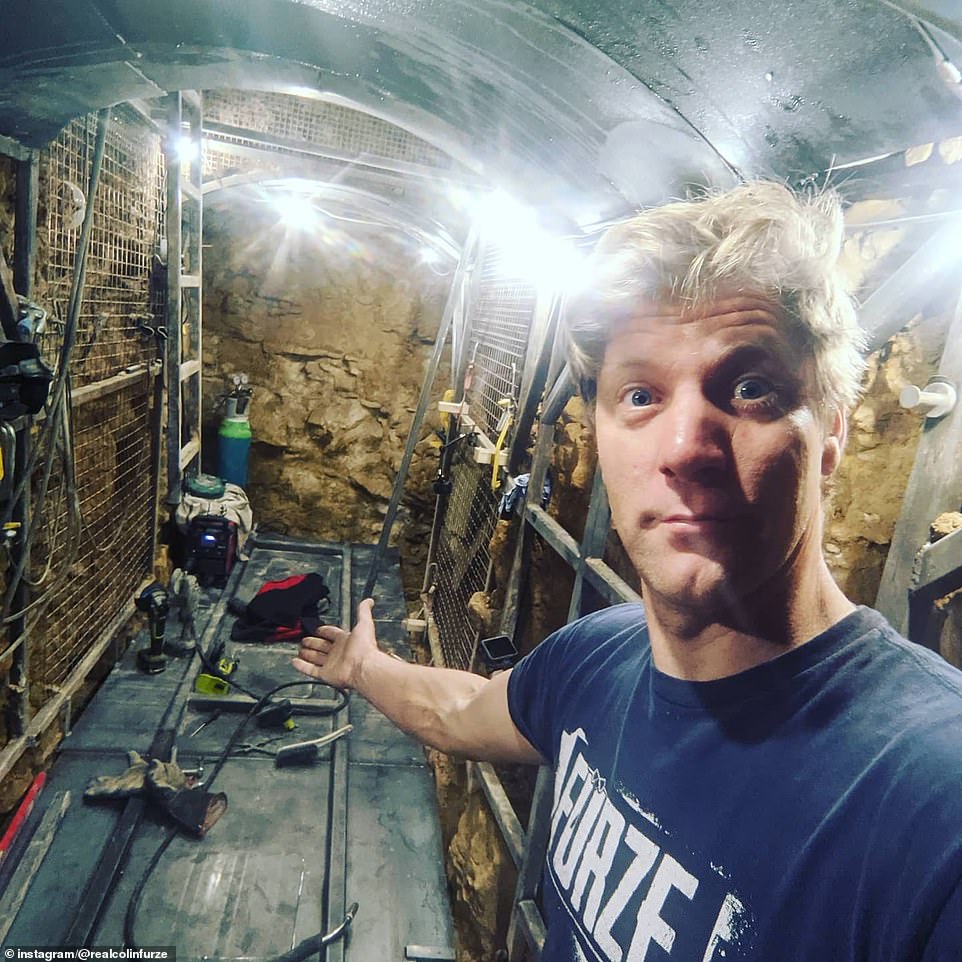 Mr Furze started the tunnel under his shed floor in November 2018 and it took him around a year to dig down to three-and-a-half metres deep, working on it when his neighbours were out so it wasn’t too noisy.

Mr Furze told the BBC that he created the tunnel because he thought ‘it would be cool’, adding that he thought it would be ‘amazing if I could get to the bunker without having to walk down the path outside’.

Documents on the South Kesteven District Council website confirm permission for the project was granted on June 10 and work must be completed within three years.

The BBC reported that the impressive structure lies 1.2m (4ft) beneath the surface.

Mr Furze told BBC News that there would have been a ‘bit of an argument’ with the council if his planning permission had been denied, and that filling it in would have been ‘carnage’.

He said: ‘I suppose we would have had a bit of an argument because you know, I didn’t want to fill it in and you can’t really get rid of it because I mean, if anyone’s seen the videos online, it’s steel, concrete, taking it out would cause more carnage than actually building it.’

‘I’ll tell you what, I thought I’d get three videos out of it maximum, just digging and building a tunnel,’ Furze continued.

‘It’s nine videos now and people still want more, it is the one project I’ve done where they just can’t get enough of it.’

He added: ‘It’s been one of the best YouTube projects I’ve ever done.’

Mr Furze started the tunnel under his shed floor in November 2018 and it took him around a year to dig down to three-and-a-half metres deep, working on it when his neighbours were out so it wasn’t too noisy.

The inventor then began using a shovel and a bucket with a pulley system to hoist the rubble out of the hole as it got deeper. 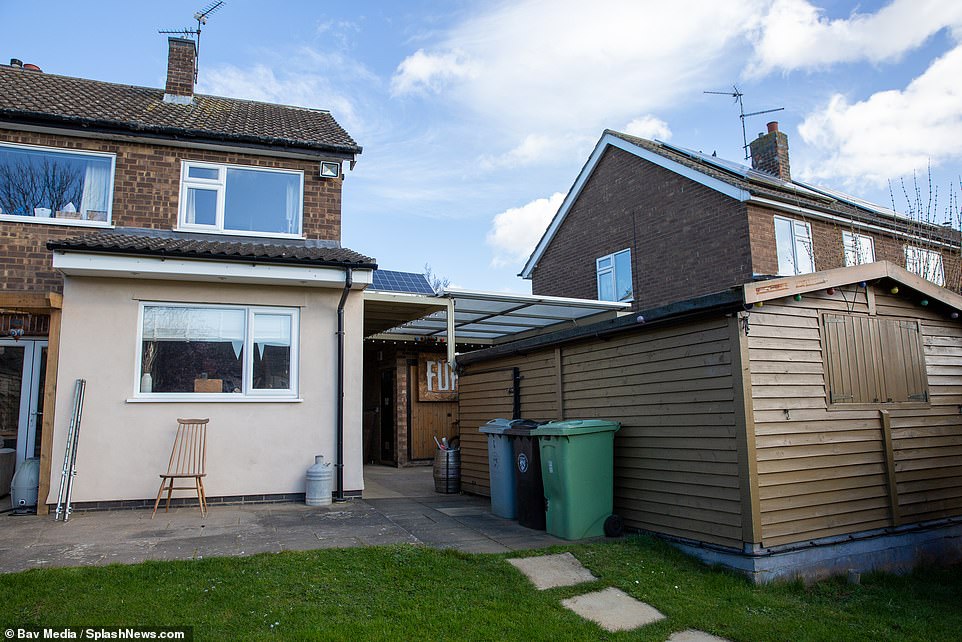 Colin Furze’s house with the kitchen on the left and the shed on the right, with the tunnel going under the buildings 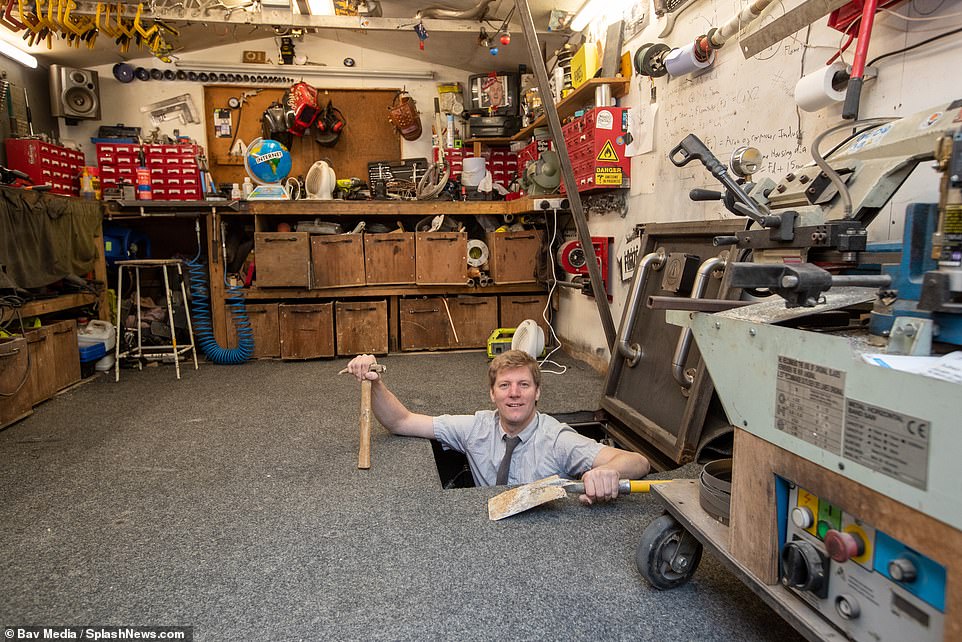 It took Colin a whole year to dig three metres down, picture by the entrance in the shed that connects to the tunnel 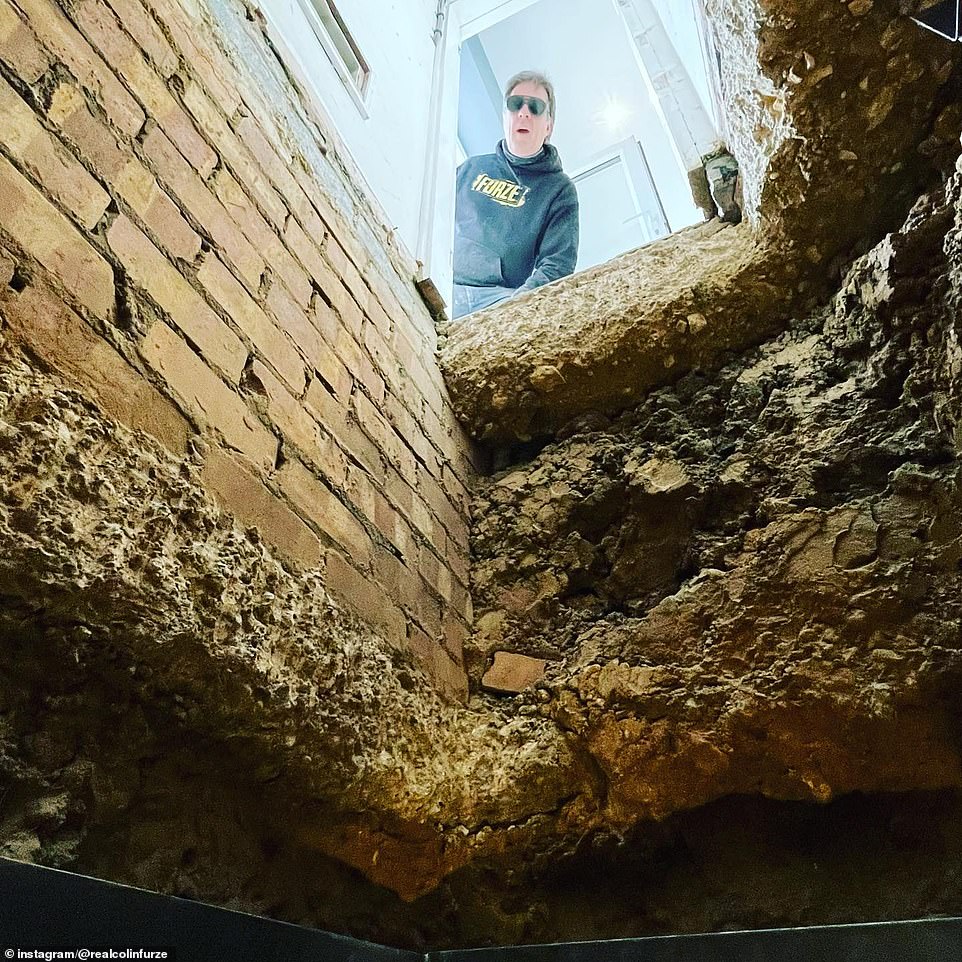 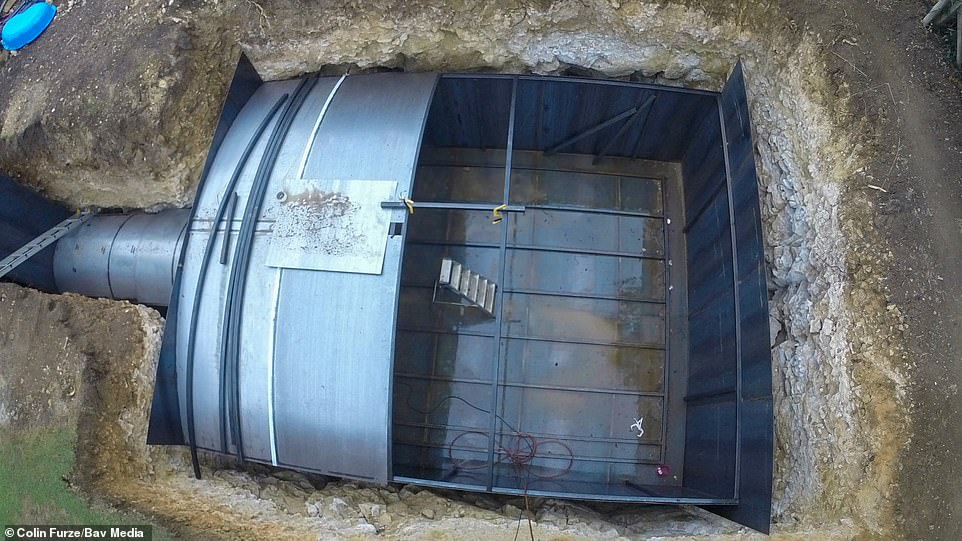 He then began digging sideways last year, using hydraulic digging equipment and aided by a pair of friends to forge an underground path.

As the tunnel got longer, Mr Furze built a small mine cart and track to help transport the rubble out of the hole.

‘We had to dig the whole thing by hand as the tunnel goes underneath the foundations of my shed, garage and house,’ he said.

‘It was very hard work but also one of the most enjoyable things I have ever done.

‘We wanted to keep the noise down for my neighbours so used a shovel and hydraulics, which were really quiet.’

The tunnel has now been reinforced with steel and concrete to prevent cave-ins.

His bunker won the workshop/studio category in the 2020 Cuprinol Shed of the Year contest.