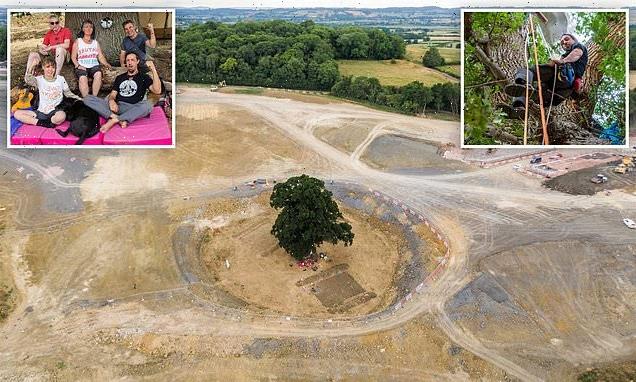 Extinction Rebellion protesters are occupying the 600-year-old oak tree to stop it from being cut down as part of a road project.

The militant eco group has been living in the tree in a bid to prevent the A303 in Somerset from being widened as part of a £250m scheme.

XR members – including a deputy mayor – are also taking turns to winch themselves up into the oak while those on the ground support them.

One of the group in the weeks since they started occupying the area also had to be taken to hospital by paramedics after suffering a wasp sting and going into anaphylactic shock.

The protest has attracted the support of presenter Chris Packham who called it a ‘magnificent’ and ‘beautiful’ tree.

The work started in September 2021 to dual the A303 between the Podimore and Sparkford roundabouts, following approval by Transport Secretary Grant Shapps, and has already seen most of the area surrounding the oak flattened.

It will make room for a new slip road connecting the new dual carriageway to the nearby Hazlegrove Prep School. 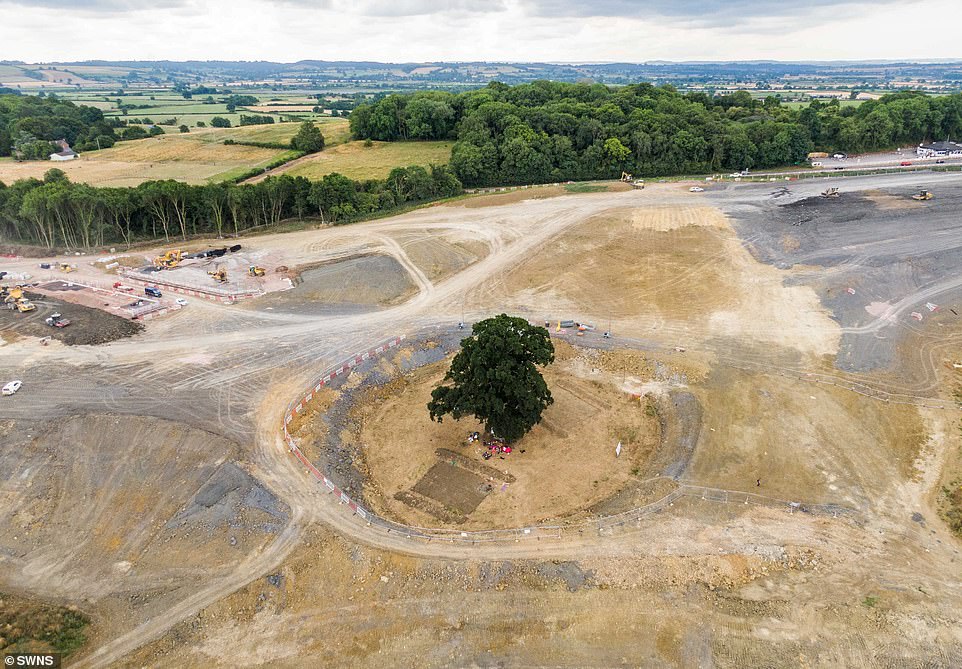 Protesters are occupying a 600-year-old tree to prevent it from being cut down – to build a £250m road. Pictured: The oak near Queen Camel in Somerset surrounded by works 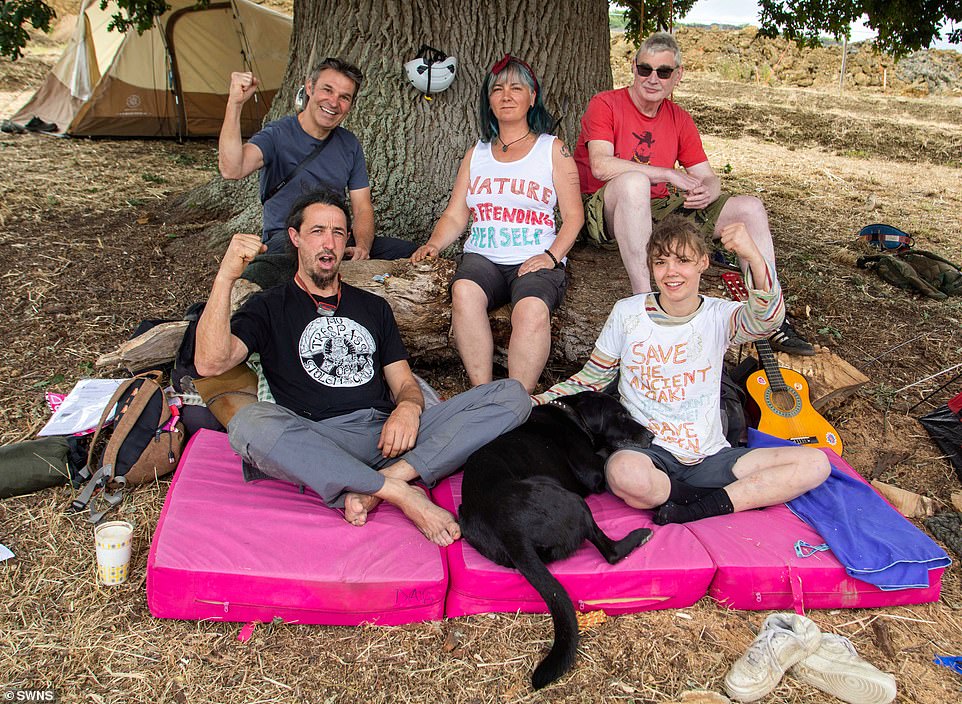 Fifi Wolf, Indra Donfranscesco, Julien Hight, Direction Action Volunteer, Dav and David MacMillan with the ancient Oak near Queen Camel in Somerset, which is being guarded by protesters. 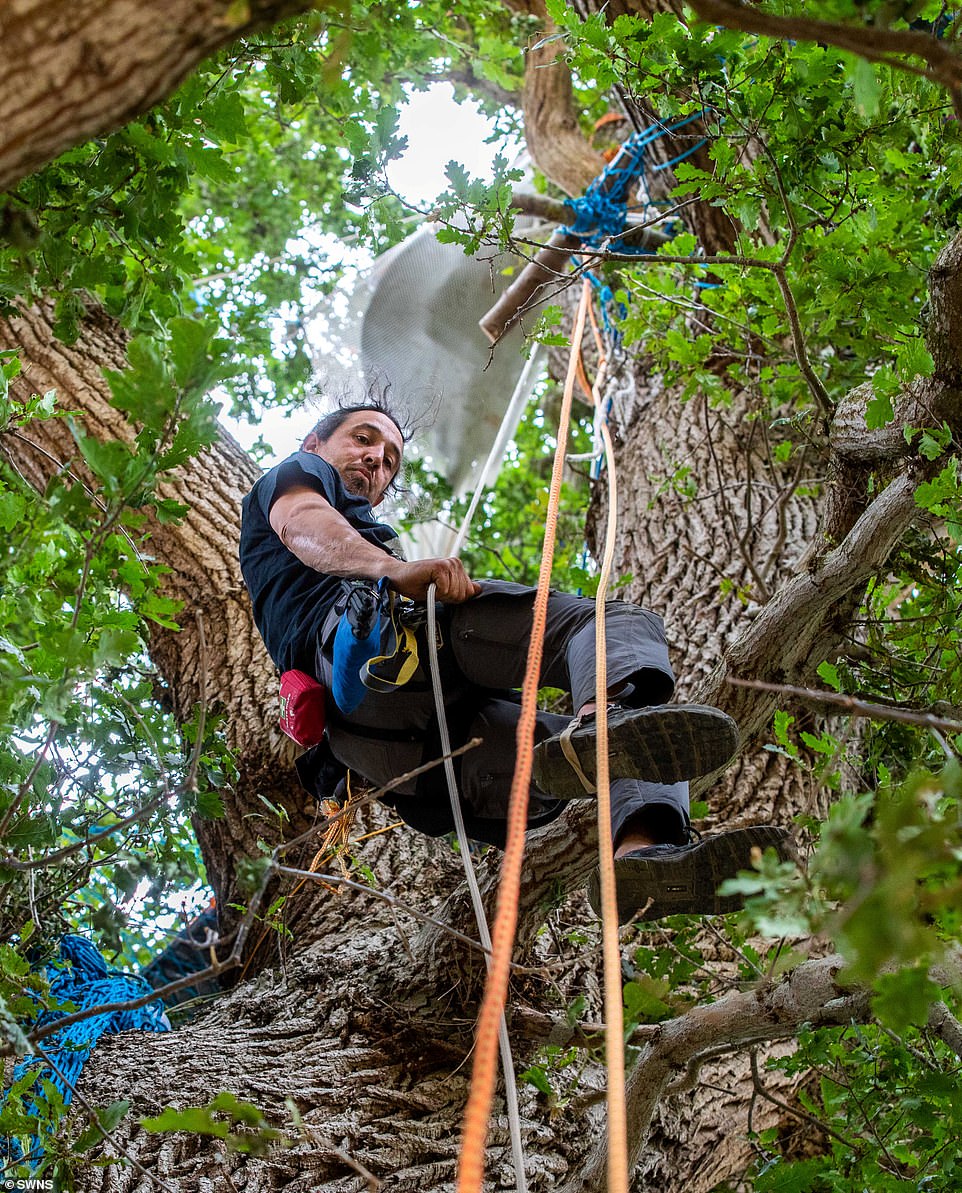 Direction Action Volunteer, Dev, makes his way down the ancient Oak near Queen Camel in Somerset

Campaigner and deputy mayor of Glastonbury Cllr Indra Donfranscesco said: ‘It is veteran tree. She is about four or five hundred years old. There is nothing wrong with her. She’s an oak.

‘We found about two and half weeks ago that she was going to be felled.

‘We can’t afford to lose anymore trees in a time of climate crisis. And in time where we are seeing heatwaves and the amazing thing about camping under this tree is she shields us.’

She also claimed that the bailiffs arrived on Monday but said XR will not move from the tree.

Dav, a tree surgeon, who claims to go all around the world saving trees is doing a lot of the rigging so the team can get up the oak.

He explained that they are ‘ready for possible evictions’ and added: ‘It should be protected. It’s like a little of eco system in a field. People don’t give a monkeys and we’re standing up for nature.’ 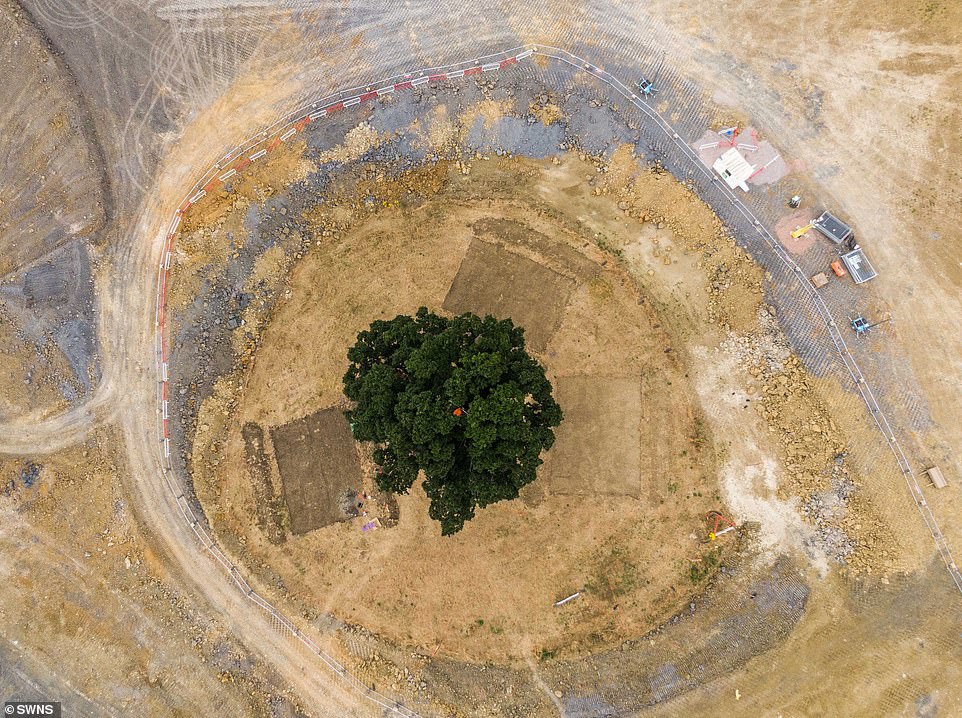 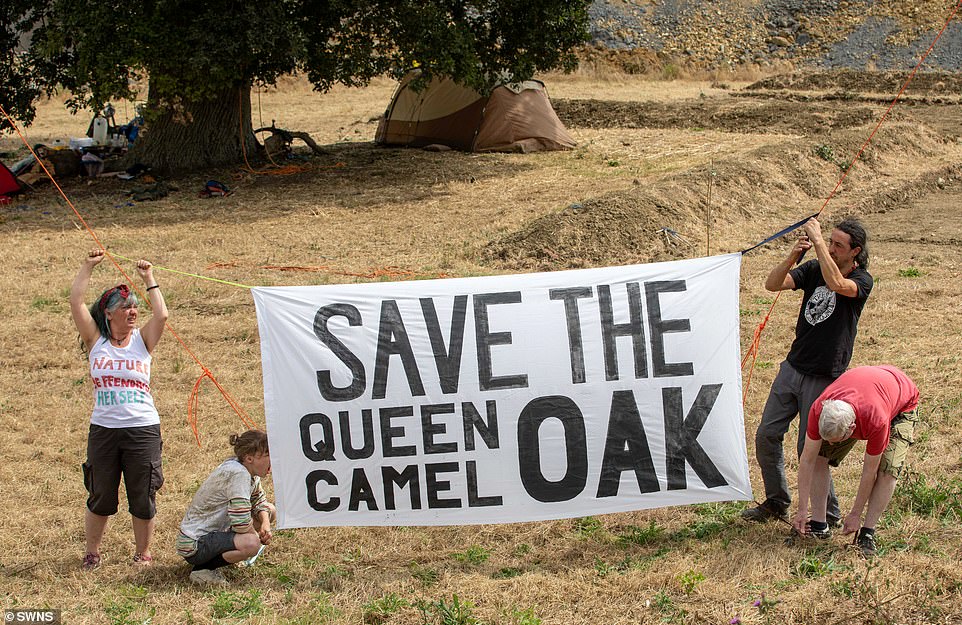 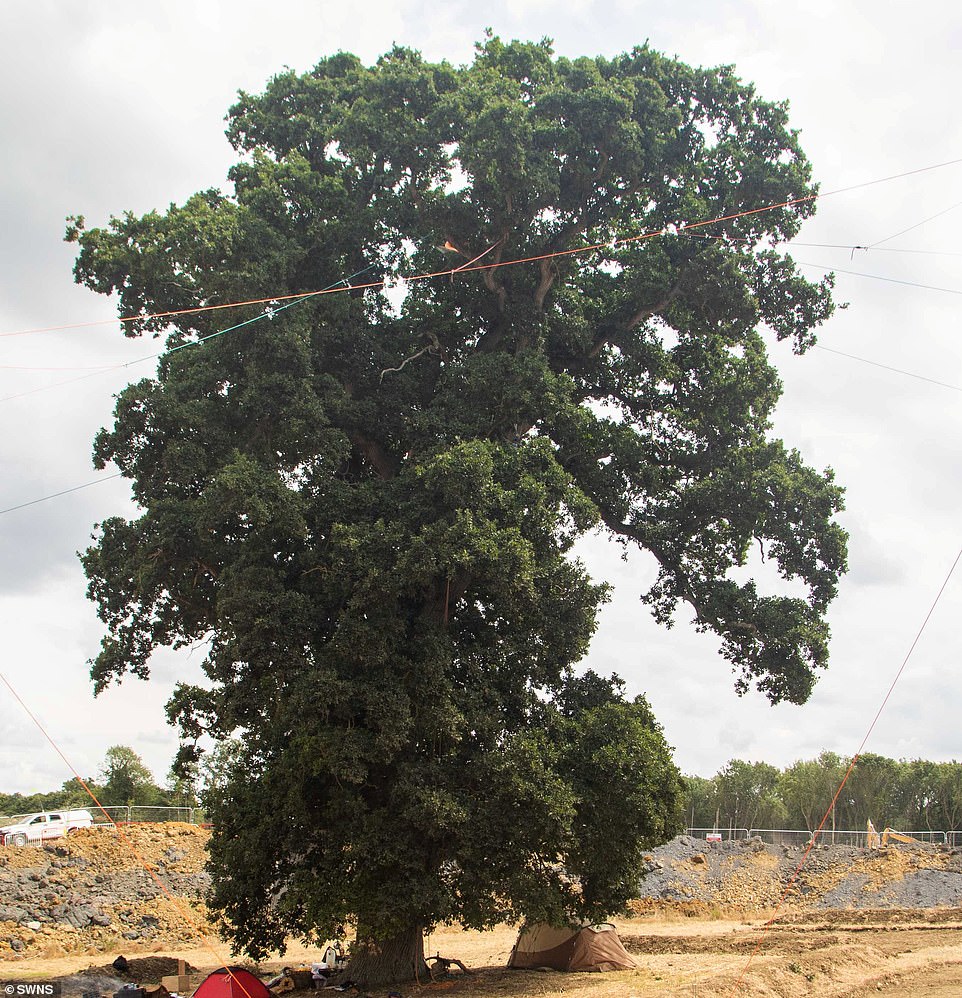 One of the main protesters has posted numerous updates to his Twitter feed since the action begin.

Simon Be said: ‘This tree’s stood watch over this land for 600 years. National Highways has deliberately misrepresented its age and size in order to avoid it’s legal obligations.

‘Those here are all willing to get arrested by resisting non-violently.’

Wildlife presenter Mr Packham, who tweeted in reply to Simon: ‘This is a magnificent tree. It’s beautiful. It’s important, precious, a treasure.

‘It needs to be cherished. Please National Highways, rethink this. It will never be replaced.’ 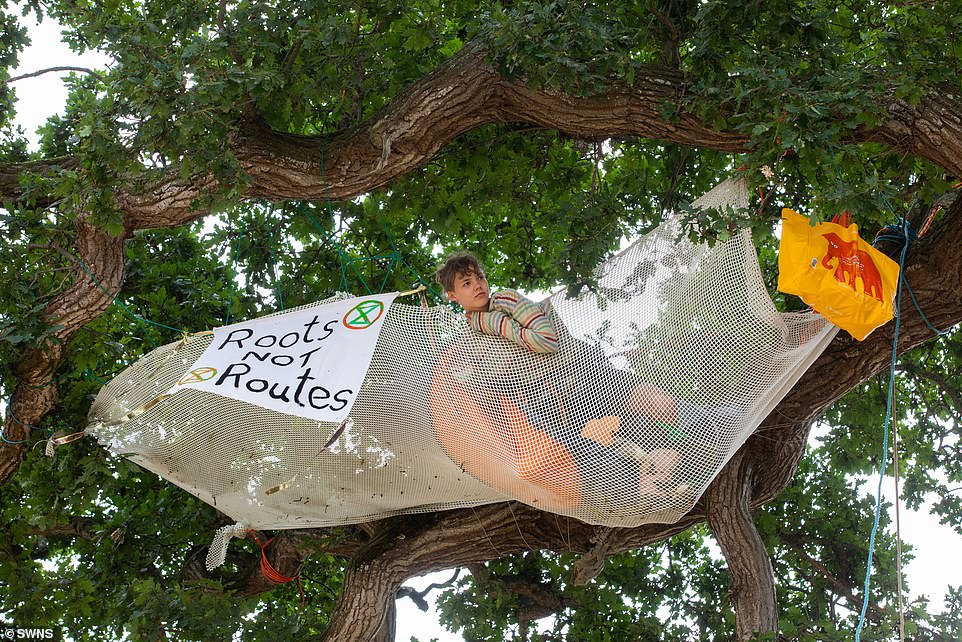 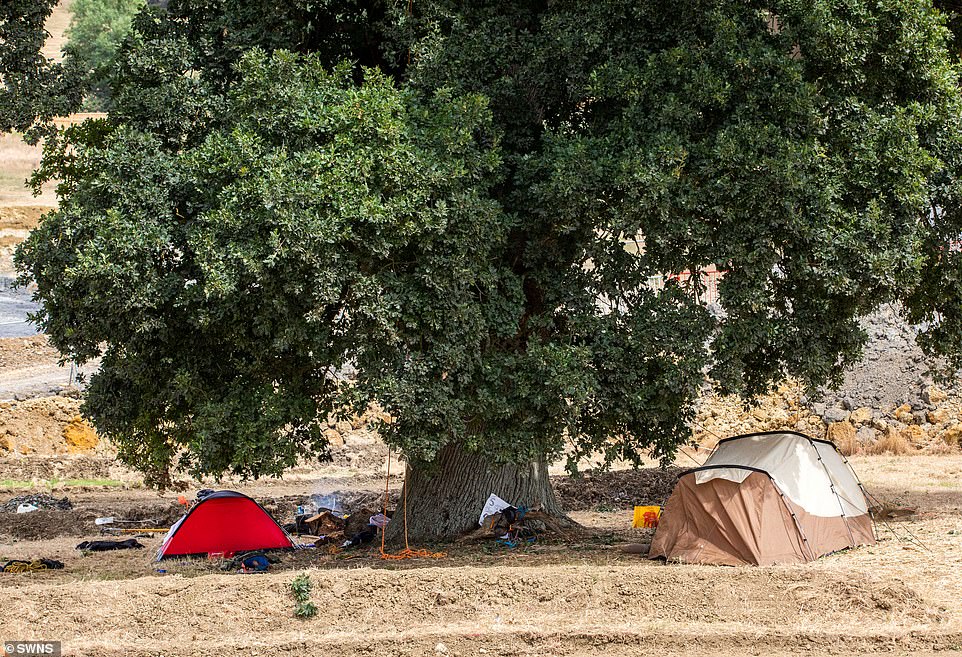 The protesters did make an appeal to the High Court to secure the tree’s future but has proved unsuccessful.

National Highways stated that their own assessment of the oak had estimated it to be ‘around 400-450 years old’, and that it was not subject to any form of protection order.

Moving the slip road was considered during the planning process, but officers this would have resulted in the scheme being ‘severely delayed’ and attempts to move the tree were not viable.

The agency – formerly known as Highways England – said it was committed to planting new trees to prevent biodiversity being lost from the A303 scheme, and that removing the tree was always ‘a last resort’. 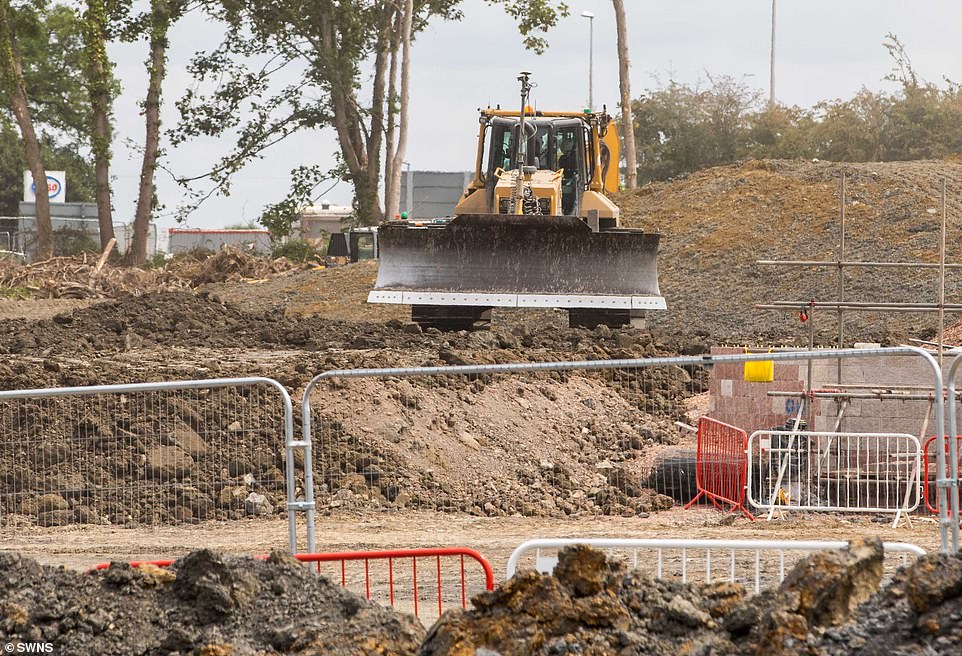 A bulldozer is pictured on the site near the A303 between the Podimore and Sparkford roundabouts, which are being dualled as part of the scheme 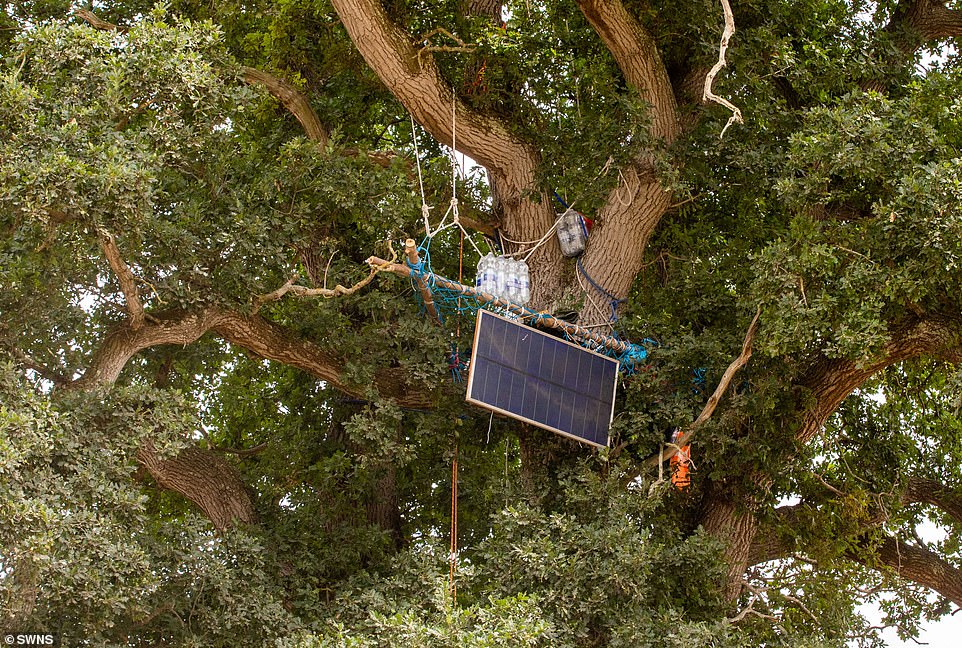 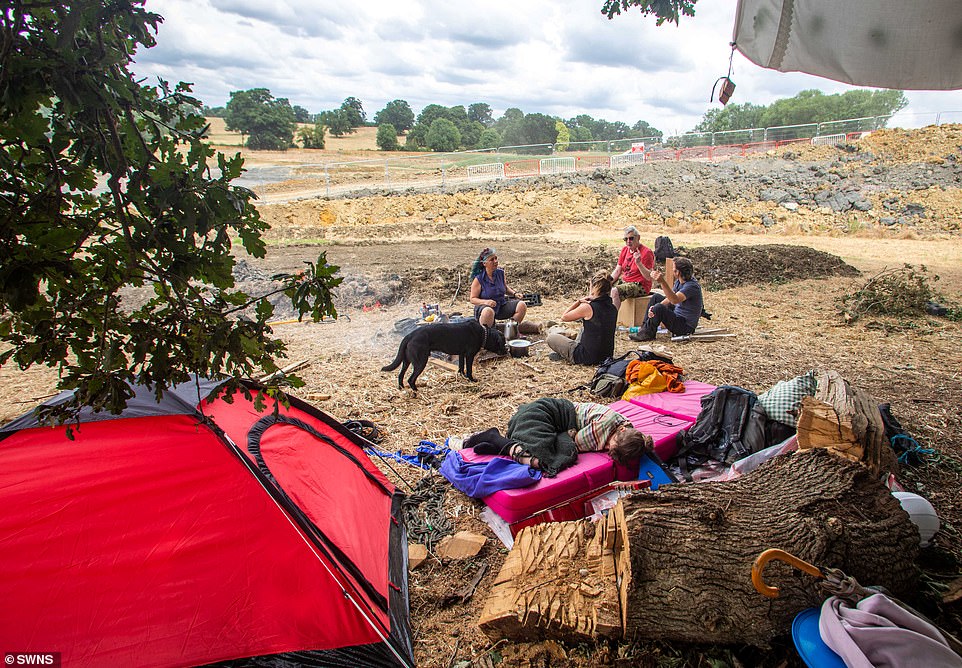 Protesters have occupied a veteran oak tree in Somerset in a desperate bid to prevent it from being torn down as part of a major road-building scheme. Here they are pictured cooking in the open and sleeping 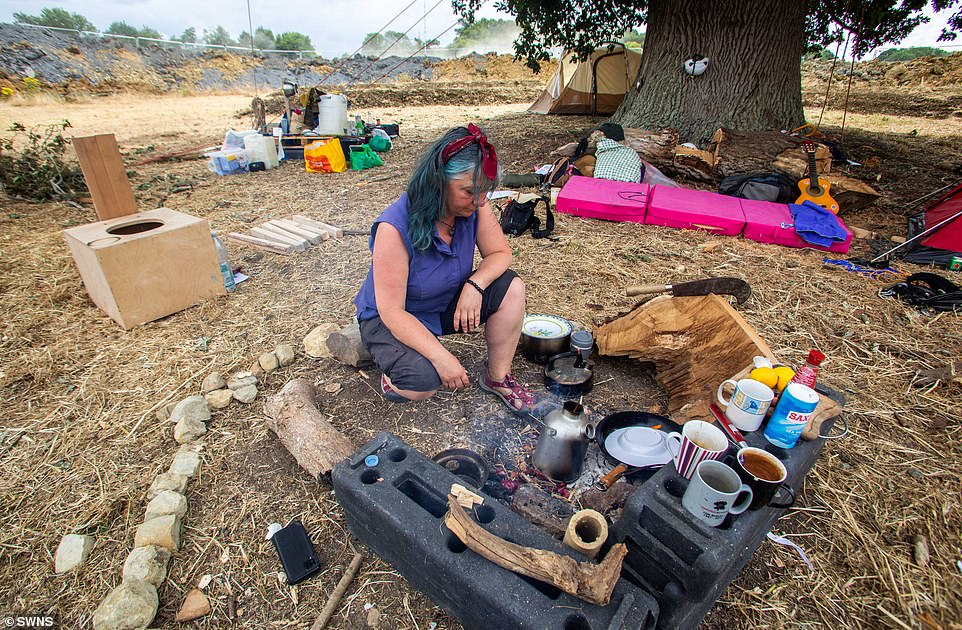 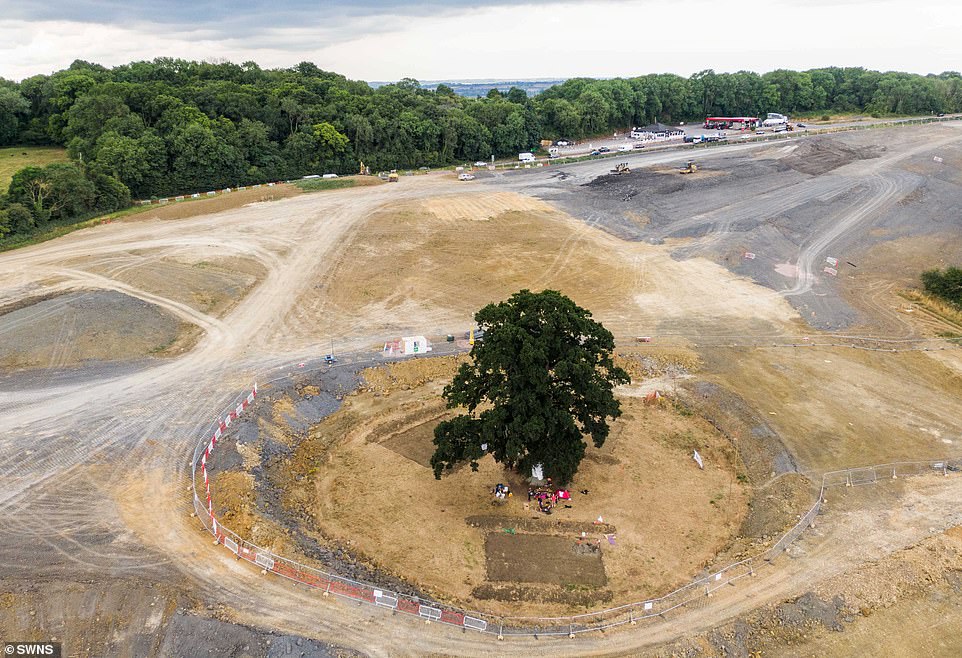 National Highways said it ‘respects the right to protest’ but argued that it needs to cut trees like this one where it’s to ‘necessary to allow us to improve journeys’. Pictured: The tree cordoned off by the roads authority

A spokesman said: ‘We respect the right to protest and will work with police and all relevant authorities, and those protesting, to ensure everyone is safe.

‘We take our environmental responsibilities very seriously and are one of the largest tree planting organisations in the UK, with plans to plant an extra three million trees by 2030.

‘We only cut back or fell trees where it is essential to keep people safe, protect the environment or where it is necessary to allow us to improve journeys.’