Scientists probing the origins of the coronavirus are wrapping up a lengthy investigation in China and have found “important clues” about a Wuhan seafood market’s role in the outbreak.

Peter Daszak, a New York-based zoologist assisting the World Health Organisation-sponsored mission, said he anticipates the main findings will be released before his planned February 10 departure. Speaking from the central city of Wuhan, where COVID-19 mushroomed in December 2019, Daszak said the 14-member group worked with experts in China and visited key hot spots and research centres to uncover “some real clues about what happened”. 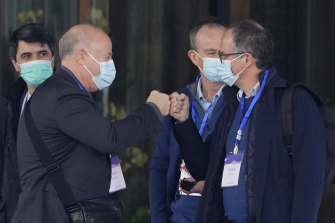 Investigators want to know how the SARS-CoV-2 virus – whose closest known relative came from bats 1600 kilometres away – spread explosively in Wuhan before causing the worst contagion in more than a century. Daszak said the investigation heralds a turning point in pandemic mitigation.

“It’s the beginning of hopefully a really deep understanding of what happened so we can stop the next one,” he said. “That’s what this is all about – trying to understand why these things emerge so we don’t continually have global economic crashes and horrific mortality while we wait for vaccines. It’s just not a tenable future.”

The WHO was asked in May to help “identify the zoonotic source of the virus and the route of introduction to the human population, including the possible role of intermediate hosts”.

The lack of a clear pathway from bats to humans has stoked speculation – refuted by Daszak and many other scientists – that the virus might have escaped from the Wuhan Institute of Virology, a maximum bio-containment laboratory studying bat-borne coronaviruses.

Scientists visited the lab and asked Shi Zhengli, who has collected and analysed these viruses for more than a decade, about the research and the earliest known coronavirus cases.

“We really have to cover the whole gamut of key lines of investigation,” Daszak said. “To be fair to our hosts here in China, they’ve been doing the same for the last few months. They’ve been working behind the scenes, digging up the information, looking at it and getting it ready.”

The work has been “collaborative,” with Chinese counterparts helping mission investigators dig deeper for clues, he said. 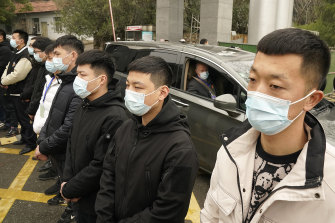 Peter Daszak of the World Health Organization leaves in a car past a row of security personnel at the Hubei Centre for Disease Control and Prevention in Wuhan.Credit:AP

“We sat down with them every single day and went through information, new data, and then said we want to go to the key places,” the British scientist said. “They asked for a list. We suggested where we should go and the people we should meet. We went to every place on that list and they were really forthcoming with that.”

Daszak is one of 10 independent experts assisting the WHO mission. The agency also has five staff members participating, and the UN’s Food and Agriculture Organisation and the Paris-based World Organisation for Animal Health have two each.

Mission delegates worked in three groups that focused on the potential involvement of animals, the epidemiology or spread of the disease, and the findings from environmental sampling. Genetic sequencing data are helping investigators identify threads linking the information across patients and wildlife, Daszak said.

“My feeling is we will be able to say something of some value at the end of this trip — quite a lot of value, but I don’t want to get into what that’s going to be or which way it points,” he said, adding that the group’s findings are confidential until they are released publicly.

Daszak, who was focused on the animal side, said his trip to the Huanan fresh produce market in central Wuhan was especially useful.

The so-called wet market sold mostly seafood, as well as meat that included freshly prepared wildlife. It was a focus early in the outbreak, when cases occurred among workers and shoppers, suggesting it might have been where the virus jumped from animals to humans.

“Right now, we’re trying to tease everything together,” he said. “We’ve looked at these three strands separately. Now we’re going to bring it together and see what everything tells us.”

While the food market was shuttered and cleaned almost immediately after cases were recognised, “it’s still pretty intact,” Daszak said. “People left in a hurry and they left equipment, they left utensils, they left evidence of what was going on, and that’s what we looked at.”

Scientists in China who took environmental samples inside the market identified sites where traces of SARS-CoV-2 were detected, he said. Investigators also benefited from greater understanding of COVID-19.

“We know now what we didn’t know then – that for every sick case, there were others that were asymptomatic or difficult to distinguish from a cold or cough,” Daszak said. “And so it’s not unexpected that there would have been other cases other than ones that got into hospital. But how many others, when did this start? That’s the sort of thing we’re still working on.”

Viruses are passed along “convoluted rivers of emergence” and tracing that journey is complicated and will take “a really long time,” Daszak said. “What I have seen already tells me that there are some real clues about what happened, and I hope that we’ll be able to make a solid explanation of that by the end of this trip.”