An Iranian man nicknamed the “dirtiest man in the world” for living in filth and not washing for decades has died at the age of 94, state media reported on Tuesday.

Amou Haji, who did not wash for more than half a century, died on Sunday in the village of Dejgah in the southern province of Fars, IRNA news agency reported. 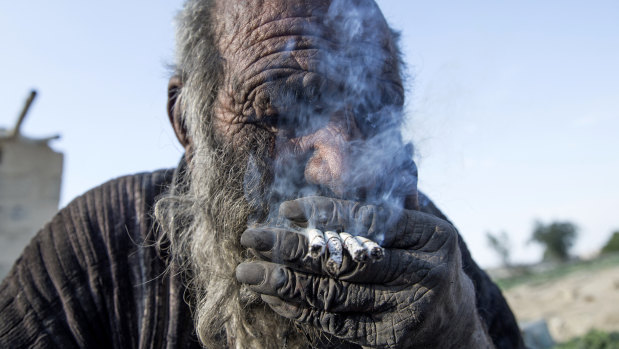 Amou Haji (uncle Haji) smokes several cigarettes as he sits on the ground on the outskirts of the village of Dezhgah in the Dehram district of the southwestern Iranian Fars province in 2018.Credit:AFP/Getty

For decades he had avoided eating fresh food and showering over fears of getting sick, the agency quoted a local official as saying.

But “for the first time a few months ago, villagers had taken him to a bathroom to wash,” IRNA reported.

“Not long after, he fell ill and finally, on Sunday… he gave up his life,” it reported.

Though Amou Hajji had never married and apparently had no family, the eccentric was viewed with some affection by local villagers, who reportedly built him a cinderblock shack so he would stop sleeping in a hole in the ground.

He became an object of curiosity in recent years, with people posting video of his strange behaviour, which included smoking up to five cigarettes at once, or smoking dung from a metal plumbing joint.

Pictures showed the ascetic sitting in the dirt, his skin and rags black with filth.

Among the lore surrounding him it was claimed that he ate roadkill – preferring rotten porcupine meat – and drank five litres of water a day collected from puddles in a rusty pail.

Despite this unorthodox lifestyle, his constitution remained robust until recently, with reports earlier this year that a team of doctors from Tehran had examined him and found him to be in good health.