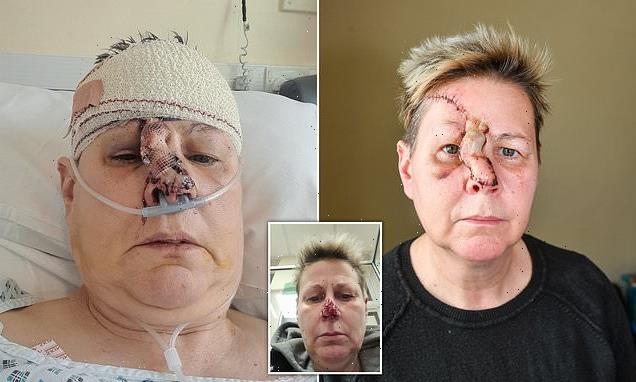 A woman was left with shocking facial injuries after she petted a dog whose owner told her it was friendly.

Sam Lodge, 53, was on her way home in Grimsby when a whippet-like dog savagely mauled her face, exposing the cartilage on her nose.

She is now worried she will never get the feeling back in her face after suffering serious nerve damage following the attack on April 1.

The appearance of the initial injury was not too drastic, but Sam had to have several major operations to grow the skin back on her face.

Though as a dog lover, she still does not want the animal to be put down. 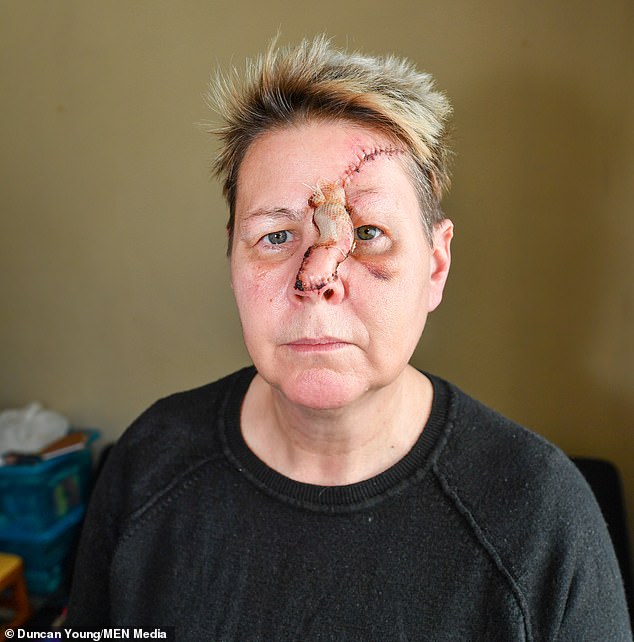 Sam Lodge (pictured), 53, was left needing facial surgeries after she went to pet a dog on her way home in Grimsby, as the dog viciously bit her face after the owner said it was safe to pet 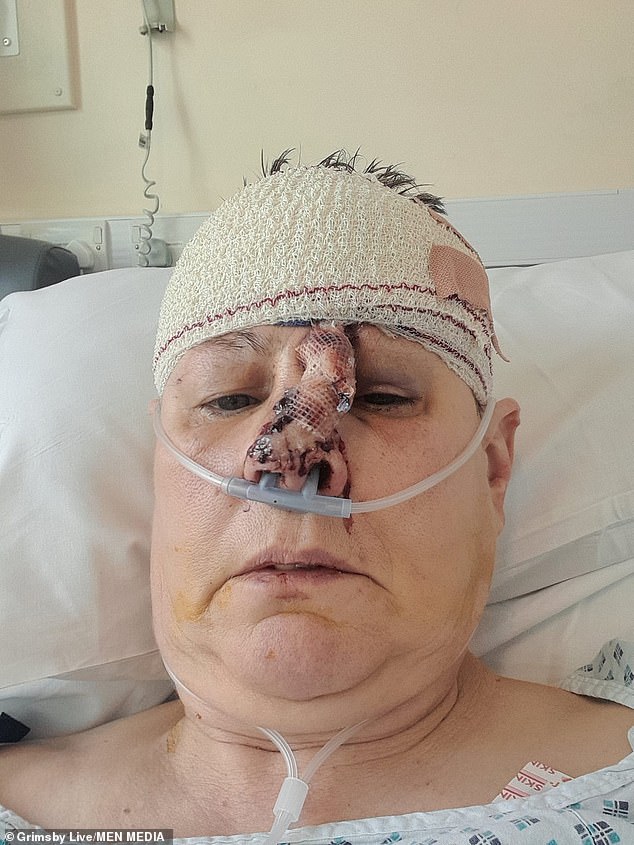 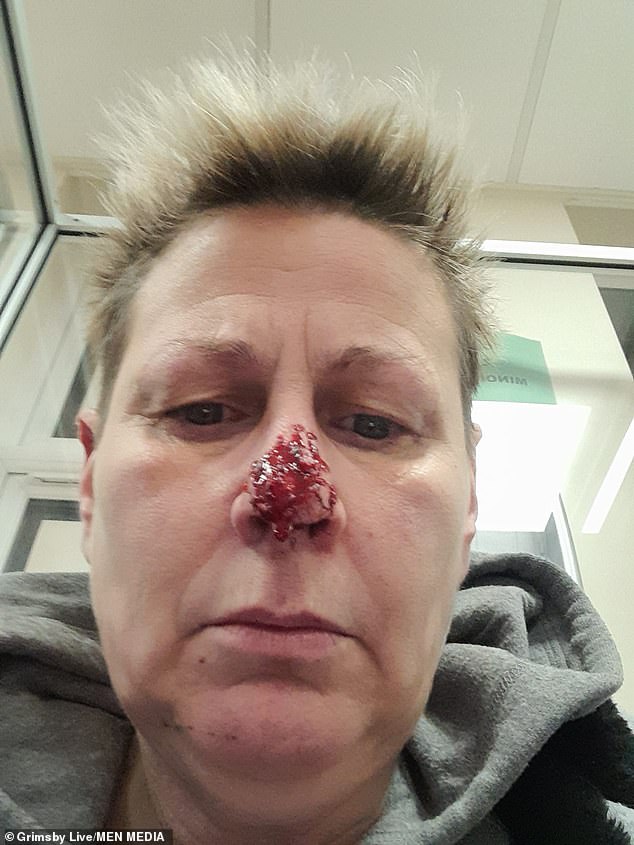 The incident happened near to her home, and she initially thought she had just been headbutted but realised the extent of her injury (pictured) soon after

Speaking to GrimsbyLive, she said: ‘I was out walking and I’d nearly got back to my house when I came across the dog.

‘I love dogs and have always fussed or petted them whenever I’ve come across them.

‘I asked if the dog was friendly and the owner told me they were so I bent down to pet it.

‘It was at that point the dog went for me, nothing like this has ever happened to me before.

‘At first, I just thought the dog had headbutted me and it wasn’t until I got home and washed my face that I realised exactly what had happened. It came as quite a shock.’

Regardless of the traumatic injury she suffered, Sam wants the dog to live but hopes the owner will put a muzzle on it or stop people from getting too close.

She added: ‘I’d hate to see the dog put to sleep, I love dogs. I just want people to be more careful and tell people if their dog is not safe.’ 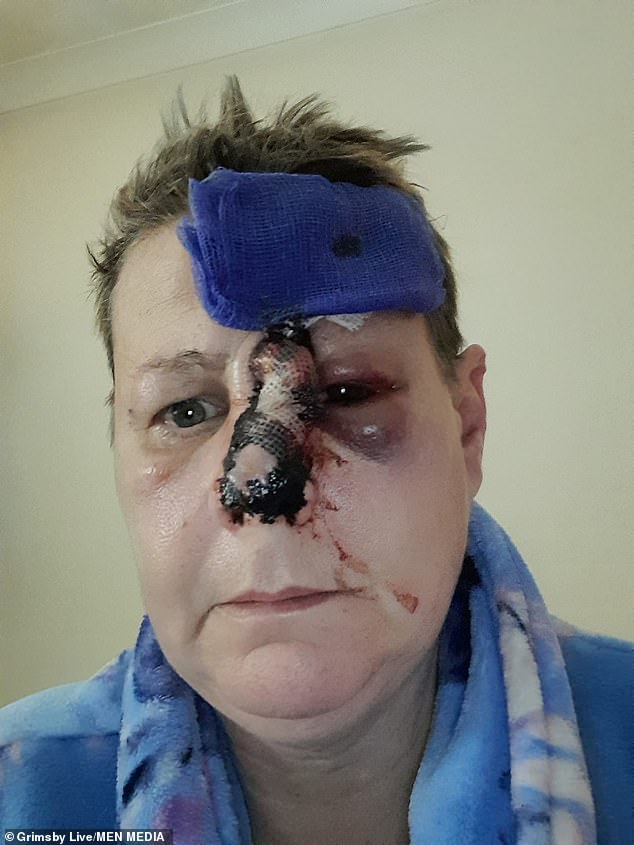 The 53-year-old was told it could take 18 months before she gets any feeling back in her head, if it returns at all 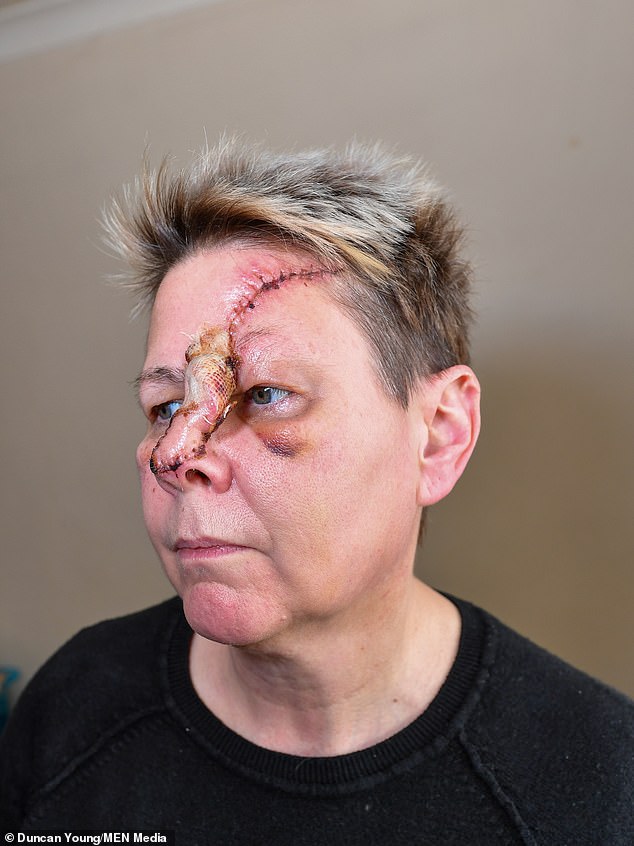 The owner of the dog did not report the incident and Humberside Police have put out an appeal to try and track her down.

After the attack Sam went to the hospital to get herself checked out and was told that she’d need extensive surgery to rectify her injuries.

She said: ‘They took a flap of skin off my hairline and attached it to the bridge of my nose.

‘They then twisted my nose to help the skin take to it. I’ve got 16 stitches in my face and I’m now waiting for it to start healing.

‘I’ve been told it could be 18 months before I get any feeling back in my head and I might never. I don’t go out as much at the minute because it’s painful for me to walk around in the wind.

‘I’ve got another operation in around three weeks to try and make me look normal again. If I’m honest, I’d like to turn back time.

‘I’m getting bored of not being in work and I’m really hoping I can highlight to others that they need to make sure dogs are safe before people pet them.’

‘We would appeal for the owner of this dog to come forward. We would also ask that if anyone was in the area at the time of the incident that has information that would help with our enquiries, please call us on our non-emergency number 101 quoting reference 16/43260/22.’