Turns out that riding a rocket into space is easy — climbing the stairs to that rocket is the real challenge. At least, that was William Shatner's experience when he participated in a round trip flight to the cosmos and back courtesy of Jeff Bezos's aerospace company, Blue Origin.

The 90-year-old Star Trek icon was part of the four-person NS-18 crew that blasted off into low orbit on October 13, a trip that's documented in the new Amazon Prime Video documentary, Shatner in Space. And Shatner tells Yahoo Entertainment that all that stood between him and the final frontier was eleven flights of stairs. (Watch a clip from the special above.)

"There's a gantry in the desert where the rocket is, and it's eleven flights up at 4,000-foot altitude," Shatner says, setting the scene. "They are bare-naked stairs, and there isn't a hallway where you can suck in air and nobody sees you. You're under observation with a lot of cameras! So I'm going up the first couple of flights thinking, 'Isn't this a beautiful desert?' And then for the rest of the flights, I was sucking in air. When I finally got up to the top, I went, 'Holy cats.' Looking back now, I think they were observing me to see whether I could do it or not. I think that was the test!" 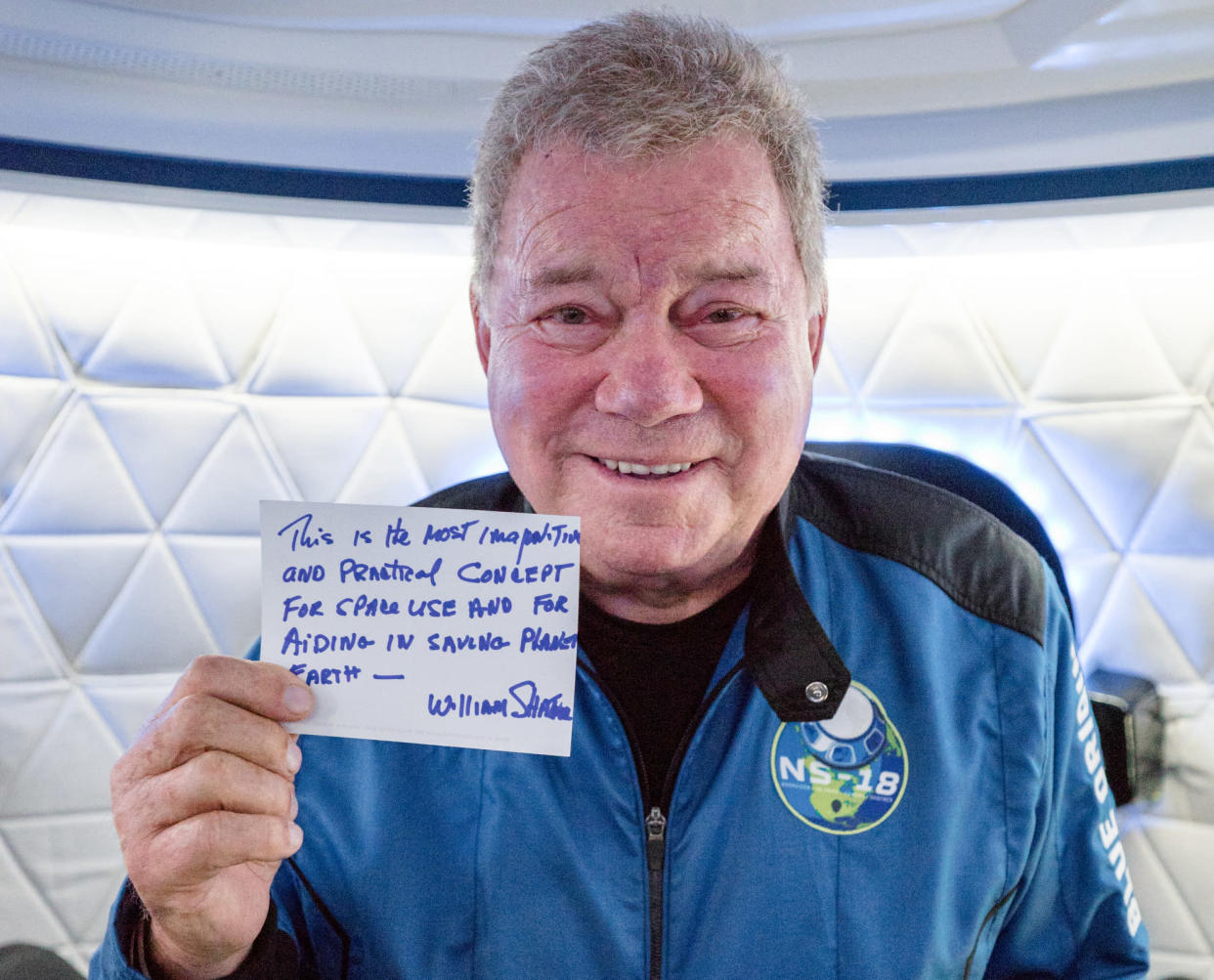 Fortunately, Shatner passed the test with flying colors, and being the oldest man in space is his reward. Although that's an achievement he admits to having mixed feelings about. "I don't want to be known as the oldest guy in space," he says, laughing. "They've got to get somebody else up there older than me."

Funnily enough, somebody else did almost take Shatner's seat on that Blue Origin flight. In November, Tom Hanks — who is Shatner's junior by 26 years — revealed on Jimmy Kimmel Live! that Bezos originally offered him the opportunity to be part of that particular mission to the stars. But the offer came with a $28 million price tag and as the Forrest Gump star eloquently put it: "I ain't paying!" Hanks added that the 12-minute flight was something he could simulate at home. "We could all do it in our seats right here," he told Kimmel.

Having been to space and back, though, Shatner would beg to differ with the Oscar winner. "That's not the case," he says about Hanks's claim, adding that he wasn't aware that the actor was initially approached to be on his flight. "If you only wanted to do weightlessness, you could go on the Vomit Comet, but I can do without that. Maybe Tom Hanks wants to do that!" (For the record, Hanks made multiple trips in that memorably-named NASA training plane as part of his prep work for Ron Howard's 1995 hit, Apollo 13.) 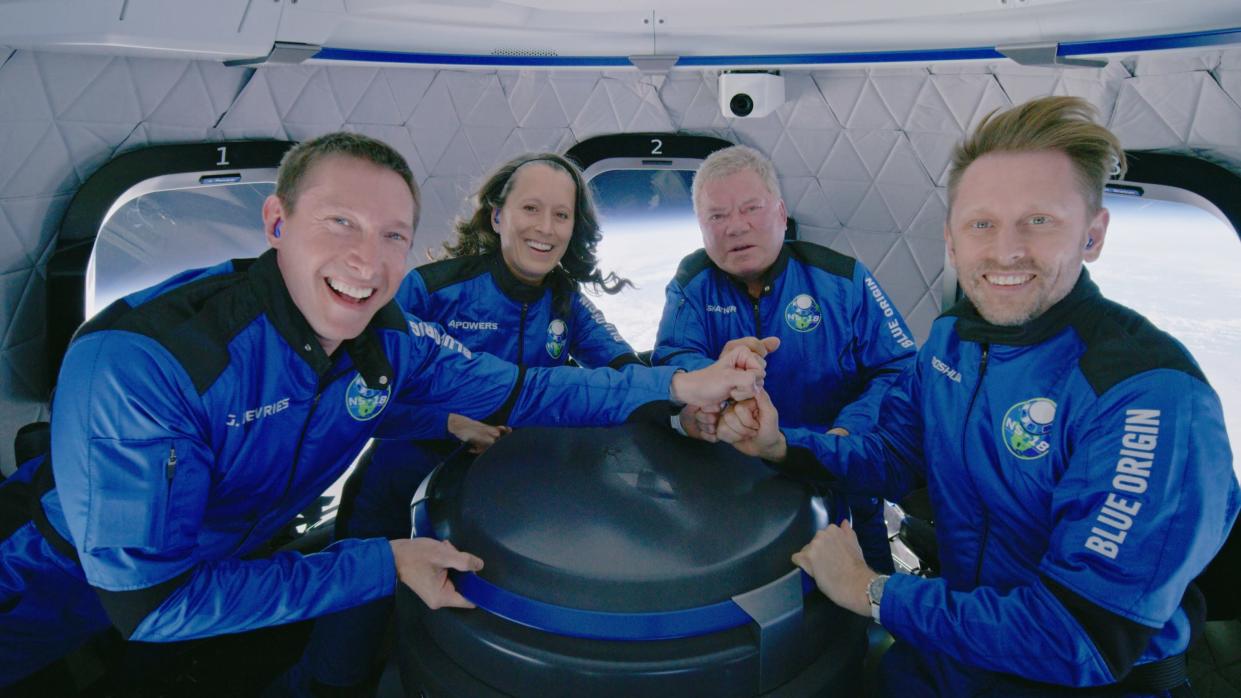 Shatner emphasizes that staring into the void of space is a "major life experience" that you can't simulate at home, or on a Star Trek soundstage for that matter. "I could see Earth to the left and the blackness of space to my right," he remembers. "So it was a very clear delineated line. I'd turn to my right and see the blackness of space, and then I'd [look to my left] and there's the Earth. I think I've described it as being a punch in the face. It's so ominous — there's life and there's death."

And the actor says that he already had death on the brain as the countdown to launch approached. "We were all in the spaceship and over the loudspeaker, they said, 'We've got fifteen minutes — if anybody wants to pull out you need to say so now. As soon as the gantry leaves, you're in.' Then the gantry left and at that moment, I thought: 'Oh s*** I could die!' Visions of the Hindenburg were in my mind."

As Shatner in Space depicts, the crew of the NS-18 had the smoothest flight possible. "It was a visceral sensation," Shatner says of his brief time in orbit. "It was more than what I thought it would be: I didn't think it would be as profound, as lasting and as meaningful as it was." 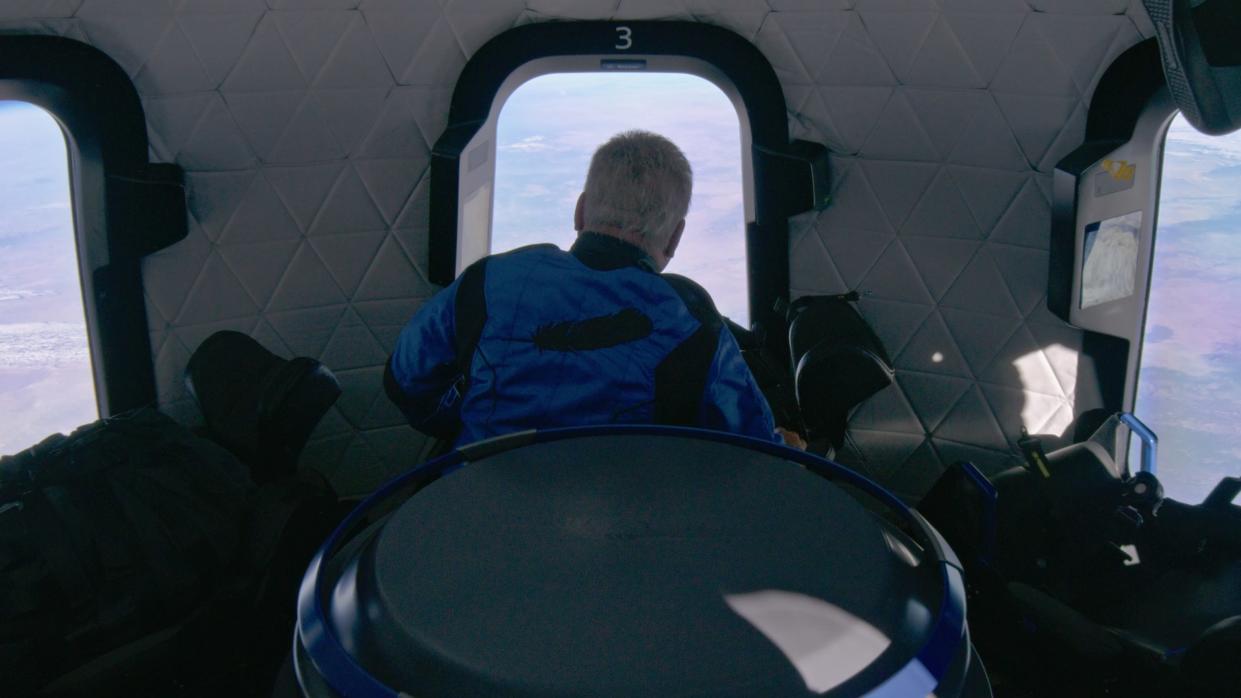 In fact, the roughest part of the experience — apart from those stairs — came after Shatner after touched down and saw that his former Starfleet comrade-turned-Twitter foil, George Takei, had dissed him in the press. "He's boldly going where other people have gone before," Takei told Page Six, going on to call him a "guinea pig." For his part, Shatner declines to respond to those remarks. "I have no idea what he's talking about," he says. "It was a mean comment, and I take it as such."

Shatner's mood brightens when the conversation turns to another Star Trek colleague, the late Leonard Nimoy. On Dec. 11, Blue Origin launched the NS-19 flight, which paid tribute to Nimoy's fan-favorite character, Spock. Crew member Laura Shepard Churchley — daughter of the pioneering astronaut, Alan Shepard — wore a "Live Long and Prosper" pendant lent to her by the actor's daughter, Julie Nimoy. Shatner says he wasn't aware of those plans but believes it's a fitting tribute to his friend.

"The two of us were so much alike that I'm sure he would have been filled with the same trepidation I experience," he says. "He might have said what I said innumerable times: 'What do I need to go to space for?' In fact, I think he might not have gone! He might have said, 'I'm happy here with my wife and kids.'"

Shatner in Space is currently streaming on Amazon Prime Video