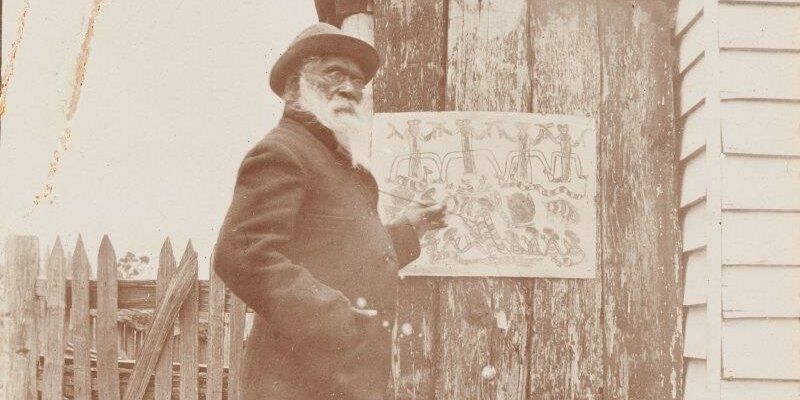 It is with thanks to the Wurundjeri Woi Wurrung Cultural Heritage Aboriginal Corporation that The Age’s series Yoo-rrook: A Time For Truth has Barak’s stunning 1885 artwork Corroboree (Figures in possum-skin cloaks) as its overarching visual element. 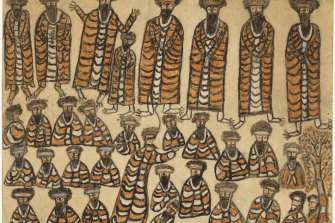 Barak witnessed traditional Indigenous life upended when Europeans flooded across Bass Strait and occupied the country that had sustained his people and their lore for tens of thousands of years.

A determined survivor, he learnt the ways of the invaders and, despite crushing tribulations, used his knowledge to keep alive the culture of his people and their right to land. 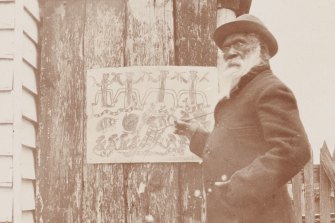 Barak at work on a drawing at the Coranderrk settlement in 1902. Credit:National Portrait Gallery

Barak was born around 1824, when the clans of five language groups making up the Kulin nation populated the vast spread of country that would become Melbourne and extended districts.

Late in his life, Barak spoke of witnessing, as a boy aged 11, the elders of the Kulin nation sitting down with John Batman in 1835.

There Batman, having sailed from Van Diemens Land, laid out the “treaty” he would insist gave him and his colleagues the rights to hundreds of thousands of hectares of Kulin country.

The result for the clans was disease, massacres, dispossession, hunger and misery, leading Barak as an adult to become involved in a campaign for the establishment of an Aboriginal settlement for survivors.

The land eventually chosen, about 50 kilometres north-west of Melbourne, was named Coranderrk, after a white flowering summer plant known as the Christmas Bush. 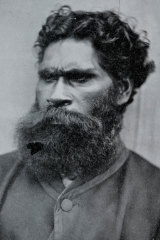 It became a self-sufficient farming community, thriving for its first decade.

Barak became ngurungaeta, or leader of the Wurundjeri-willam clan, in 1874 – just as the Board for the Protection of Aborigines was proposing to close Coranderrk and move its residents to distant reserves.

Barak spent the rest of his life defending Coranderrk’s right to exist, rallying the spirits of his people while leading long treks on foot to petition those in power at Parliament House.

Along the way, he became famed for his work as an artist. Determined to keep his people’s culture alive, he painted the corroborees of his early memories.

Eventually, he and his fellow petitioners persuaded the Victorian premier to make Coranderrk a permanent Aboriginal reserve.

Barak, having outlived two wives and a son, died in 1903. Coranderrk, a shadow of its former self, survived until 1924. It was converted to soldier settlement land in 1948.

Barak’s memory and at least part of his dream, however, persisted. 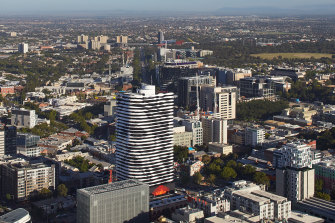 Barak’s image towers over Swanston Street on the facade of a Melbourne apartment building.

Coranderrk cemetery was handed back to the Wurundjeri people in 1991. Subsequently, 119 hectares of Coranderrk was acquired by the Kulin people.

And in a mixture of tribute and unintended irony, William Barak’s giant likeness now gazes down on Melbourne’s CBD … from a 32-storey luxury apartment building.