New York: In the 2012 Republican presidential primaries Rick Santorum, an ex-senator from Pennsylvania, came from nowhere to seriously challenge Mitt Romney for the party's nomination.

Running as the champion of Christian conservatives, Santorum capitalised on frustration among the Republican party base that Romney was not providing enough of a contrast with Barack Obama on healthcare, climate change and guns. 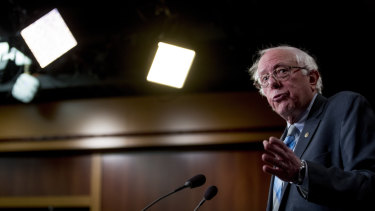 Senator Bernie Sanders speaks at a news conference on Capitol Hill in Washington.Credit:AP

This time around Sanders isn't an underdog but one of the top-tier candidates in a huge field of potential nominees.

Many of his ideas – which only a few years ago seemed thrilling and radical to US progressives – are now mainstream positions in the Democratic Party.

Several of his rivals for the party's nomination also support Medicare-for-all, free public college and a $US15 minimum wage.

It's a sign of how successful Sanders has been in pushing the party to the left.

But he could end up being a victim of his own success: his policies have become so normalised that they no longer set him apart.

In 2016, Sanders was perfectly placed to hoover up the votes of Democrats who saw Clinton as the embodiment of the party's centrist establishment.

Not being able to run as the "ABH (Anyone But Hillary) candidate" this time around will dilute his vote share.

On the flip side, a bigger pool of candidates means he could score primary victories with only 30 per cent of the vote or so.

Sanders is certain to be the most left-wing candidate in the field, meaning he will remain the favourite choice of many progressive voters. And his campaign already has access to a huge database of supporters that he can tap for small donations.

He is clearly aware of his need to win support among women and racial minorities; in a CBS interview announcing his candidacy he quickly accused Donald Trump of peddling "racism, sexism and xenophobia".

A December poll by Suffolk University found that 36 per cent of Democrats and independents would be excited if Sanders ran for president again.

But even more, 41 per cent, thought he shouldn't run – a higher number than for any other potential candidate except for Hillary Clinton.

Asked who they wanted to be the Democratic candidate, most of those polled responded "someone entirely new".

If that sentiment holds then Sanders will again miss out on the nomination – even if his policy ideas prevail.