Grace Earl’s Holy Communion was supposed to be a family affair with proud relatives and godparents watching on from the pews.

Instead, only one adult was allowed in and Grace’s grandmother caught the glimpses she could, by popping her head in and out of the church door with her feet planted outside. 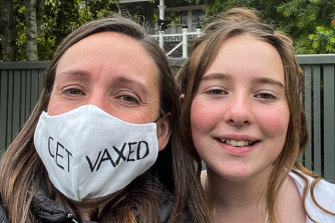 Grace’s mother, Christine Earl, protested inside by wearing a mask emblazoned with the words “get vaxed”.

While Victorian school and early childhood staff are required to be vaccinated against COVID-19, the state’s ministers of religion are not.

Catholic schools, which educate 20 per cent of Victoria’s 1 million students, are rushing this term to hold sacraments that have been delayed throughout the pandemic.

As Mrs Earl’s school prepares to celebrate a Confirmation this week, again with restricted numbers, she is calling for religious leaders to be fully vaccinated like school and early childhood staff.

“The Archbishop of Brisbane has just mandated that his clergy be jabbed, why not here?” she said.

“The Archbishop of Brisbane has just mandated that his clergy be jabbed, why not here?”

The office said the Catholic Archbishop of Melbourne Peter Comensoli had “strongly encouraged vaccination for all clergy in the archdiocese and around 95 per cent were now fully vaccinated”.

This vaccination rate is slightly higher than the Victorian vaccine rate. The office said there were no plans to follow the Archbishop of Brisbane in mandating the COVID-19 vaccine for employees, contractors, and certain volunteers unless they have a medical exemption.

The infections are driven by a rise in community transmission among unvaccinated children and the reopening of schools after remote learning in term 3. Schools made up 36 of the state’s 51 listed COVID-19 clusters on Tuesday.

When Grace’s big day came, only 25 people attended – 11 students, a guardian for each child, one priest and two teachers – due to a 30-person cap for “non-status” attendees. Had the service been restricted to fully vaccinated people, 43 could have attended under restrictions at the time.

Rules regarding religious services have since been loosened, there are now no caps if attendees are fully vaccinated, although restrictions remain for unvaccinated people. If attendees’ vaccination status isn’t checked or the status of attendees is unknown, the service is capped to one person per 4 square metres, with a maximum of 50 people.

Melbourne mother Emma Newsome was unable to attend her daughter’s Holy Communion due to an unvaccinated priest. Her husband attended instead.

Mrs Newsome manages three preschools and questioned why unvaccinated parents were not allowed inside her buildings, but unvaccinated priests were allowed to interact with children.

“I think it’s unfair that they have an exemption,” she said of religious leaders. “It’s mixed messaging.”

The Archbishop of Melbourne’s office said priests had been asked to “find ways to celebrate the sacraments so people can feel comfortable”.

The Pope is vaccinated and in August said vaccination was a “simple but profound way of promoting the common good and caring for each other, especially the most vulnerable.”

Under Victorian regulations, anyone working at a school, including educational support staff, must be vaccinated. Priests performing mass in a church do not need to be, however, they must abide by vaccination rules of any centres or schools they visit.

Until recently, almost all Victorian Catholic schools were run by the local parish priest who appointed principals, employed staff and signed off on financial statements. The newly formed Melbourne Archdiocese Catholic Schools became responsible for 290 Catholic schools this year.

Melbourne Archdiocese Catholic Schools recently urged school families to lobby against the Victorian government’s plans to prohibit faith-based schools from sacking or refusing to hire teachers or enrol students based on their sexuality or gender identity.