The World Health Organization (WHO) has pleaded with people to stay at home over Christmas and avoid seeing family because it is ‘not worth the risk’ of getting Covid or passing it onto loved ones.

Its regional director for Europe, Dr Hans Kluge, called for people to make a ‘few more months’ of sacrifices to avoid a third wave of the pandemic.

‘When we look back at these unprecedented times, I hope we all feel we acted with a spirit of shared humanity to protect those in need,’ he said.

The stance is a significant toughening of the WHO’s advice earlier this week, which said anyone planning to enjoy a Christmas get-together should wear a face mask.

As much as two-thirds of Britain is set to be under the harshest Tier Three measures from Saturday – forcing pubs and restaurants to pull down the shutters. And England is looking down the barrel of an even tougher post-Christmas lockdown, with ministers refusing to rule out another blanket squeeze to control a surge in cases.

It comes after the Government decided to go ahead with the five-day festive pause in restrictions – allowing up to three households to mix. But Boris Johnson called on the nation to have a ‘merry little Christmas’, in a last-ditch attempt to encourage the UK to stick to meeting in smaller groups.

There are hopes restrictions can be lifted by spring, however, as Pfizer’s vaccine against Covid-19 is rolled out across the country. Oxford University’s jab is expected to be approved within weeks. 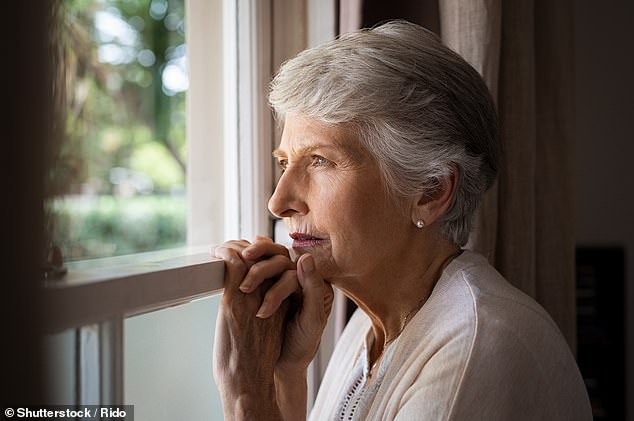 The WHO says people should stay at home this Christmas, and not meet up with missed loved ones, despite the relaxation in restrictions. (stock photo)

The East of England now has more Covid-19 patients in hospital than at the peak of the first wave of the pandemic, official figures reveal.

A total of 1,734 hospital patients with the virus were confirmed on December 16.

The region is the third in England to see Covid-19 hospitalisations surpass the first wave.

By November 16 both the North West and North East and Yorkshire had surpassed their number of hospitalisations compared to the first wave.

In the Midlands the number of patients has remained just above 3,000 for the past few weeks, near the first-wave peak of 3,430 on April 12.

London is the only region yet to approach its previous peak.

Urging those still considering seeing their loved ones this Christmas to think again, Dr Kluge said: ‘It’s not worth the risk… The safest thing to do right now is to remain at home.

‘There remains a difference between what you are being permitted to do by your authorities and what you should do.

‘We have a few more months of sacrifice ahead and can behave now in a way that collectively we are proud of.’

The UN agency earlier this week pleaded with families to wear a face mask and socially distance at festive celebrations to halt the spread of the virus.

They said this would ‘contribute significantly’ to saving lives and preventing loved ones from getting sick, but admitted they ‘may feel awkward’.

‘Indoor gatherings, even smaller ones, can be especially risky because they bring together groups of people, young and old, from different households, who may not all be adhering to the same infection prevention measures,’ they said.

‘Gatherings should be held outside if possible, and participants should wear masks and maintain physical distancing. If held outdoors, limiting group size and ensuring good ventilation to reduce exposure risk are key.’

Covid-19 infection rates rose across all age groups in the last week, according to Public Health England, and are ticking upwards in six out of seven regions in England – with only Yorkshire and the Humber still seeing cases dip.

This has concerned health chiefs, as people in this age group are most at risk of being hospitalised and death if they catch the virus.

Scotland had the lowest infection rate per 100,000 in the country, at 111.1, according to the latest figures from the Department of Health up to December 12.

In a break from the UK-wide relaxation of the rules, Wales has said only up to two households will be allowed to mix over the festive period.

The First Minister Mark Drakeford has also said the nation will be plunged into a third lockdown on December 28 amid rising infection rates and growing resentment at his Labour administrations handling of the crisis.

Northern Ireland will also move to a March-style lockdown on December 26, in a bid to drive down spiralling infection numbers.

Three regions in England have also now seen more patients in their hospitals suffering from the virus than during the first wave of the pandemic.

By November 16 both the North West and the North East and Yorkshire had surpassed their number of Covid-19 hospitalisations compared to the first wave.

It is hoped that restrictions could be lifted by spring next year – as the roll out of the Pfizer/BioNTech vaccine begins across the UK.

As many as 800,000 doses have already arrived in the UK via the Channel Tunnel, and another 39million are expected to be delivered in the coming months.

Regulators could also give the Oxford Covid-19 vaccine the green light in the coming days, significantly boosting the UK’s arsenal against the virus with 100million doses.

Yesterday NHS bosses advised doctors that they could extract a sixth dose out of the five-dose vials of the Pfizer vaccine, adding up to 20 per cent to the UK’s current stocks and meaning a further 130,000 people could be vaccinated.

Pfizer said it had overfilled vials to ensure there was enough to deliver the five doses by protecting against spillages and loss of vaccine fluid in the syringe and needle.