The British-Iranian was locked up in the Islamic Republic in 2016 and was denied access to medical care. A new Panorama episode has claimed she should have been released almost three years ago, 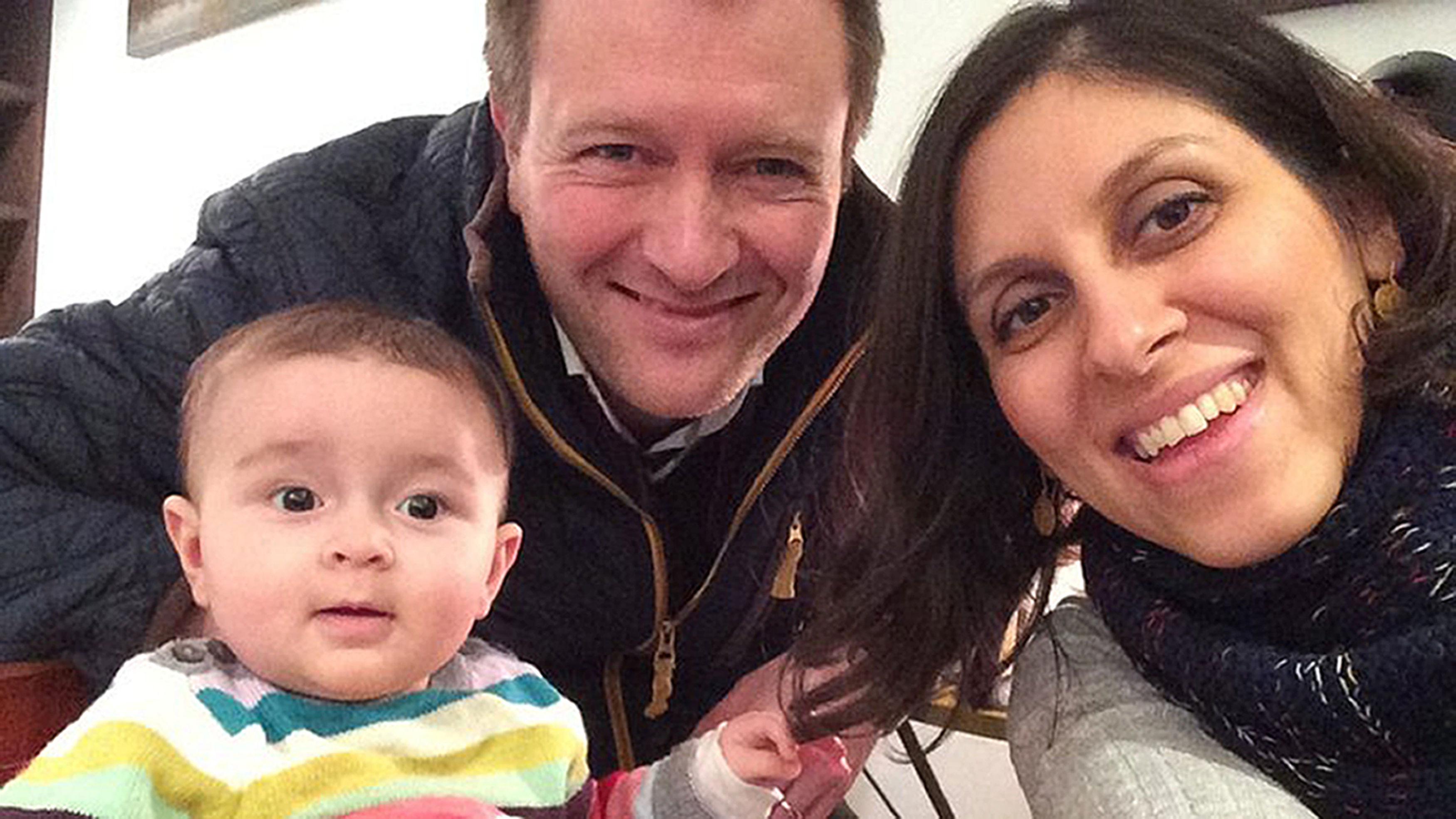 What is the latest on Nazanin Zaghari-Ratcliffe?

A new panorama documentary has said that diplomatic complications are the reason for the delay in Nazanin Zaghari-Ratcliffe's release.

Her release should have on December 28, 2017, which is the date her family was told, BBC Panorama says.

However, it was delayed due to a failed UK arms cash deal — for unknown reasons.

Iran paid £400million to the British government in the 1970s for 1,500 tanks but they were never delivered.

The then Shah of Iran had placed the order, but was deposed. The latest deal was to settle the row, it is claimed.

Mrs Zaghari-Ratcliffe has said the ­Iranian authorities told her that her release hinges on the cash being paid back.

In August 2019 it was revealed that tough new prison rules had been imposed on Nazanin Zaghari-Ratcliffe.

The Guardian reported that she is "no longer allowed to call her husband in the UK".

The hours she can see her daughter Gabriella have also been restricted.

Free Nazanin tweeted: " New rules have been issued for Nazanin’s ward restricting children visits to only once a month as part of the wider family visit & preventing international calls.

"This means Gabriella can now only see Nazanin once a month & Nazanin can no longer speak to Richard.

"Nazanin has written to the authorities to protest the change.

"She told her family: 'I am so upset. I feel like I could suffocate. I can’t even think what to do. I haven’t cried so loud in the middle of the ward for ages. How cruel they are. How unjust this is.'"

Boris Johnson PM was due to make renewed calls for Nazanin's release when he meets Hassan Rouhani at a UN summit in New York in September 2019.

Mr Johnson told reporters: "I will not only be discussing Iran's actions in the region, but also the need to release not just Nazanin but others who in our view are being illegally and unfairly held in Tehran."

Who is Nazanin Zaghari-Ratcliffe?

Nazanin Zaghari-Ratcliffe is a British-Iranian mum, a project manager with the Thomson Reuters Foundation – the charitable arm of the news agency – and a former BBC employee.

She was arrested in Tehran's Imam Khomeini airport on April 3, 2016, and accused of plotting to topple the regime.

Nazanin was stopped from returning home to Britain after visiting family with her daughter Gabriella, now four, and thrown into prison, where she spent months in solitary confinement.

Her family says Iran’s Revolutionary Guard tried to get her to confess on camera that she trained and recruited spies – a charge she denied.

In June 2019 Jeremy Hunt issued his latest pleas in support of Nazanin, was she went on hunger strike.

The Foreign Secretary told the Commons: "Whatever disagreements you have with the UK, do not punish this innocent woman."

Mr Hunt said that Mr Ratcliffe, who was also on hunger strike outside the Iranian embassy, was a "very brave man" who was doing a "remarkable job". 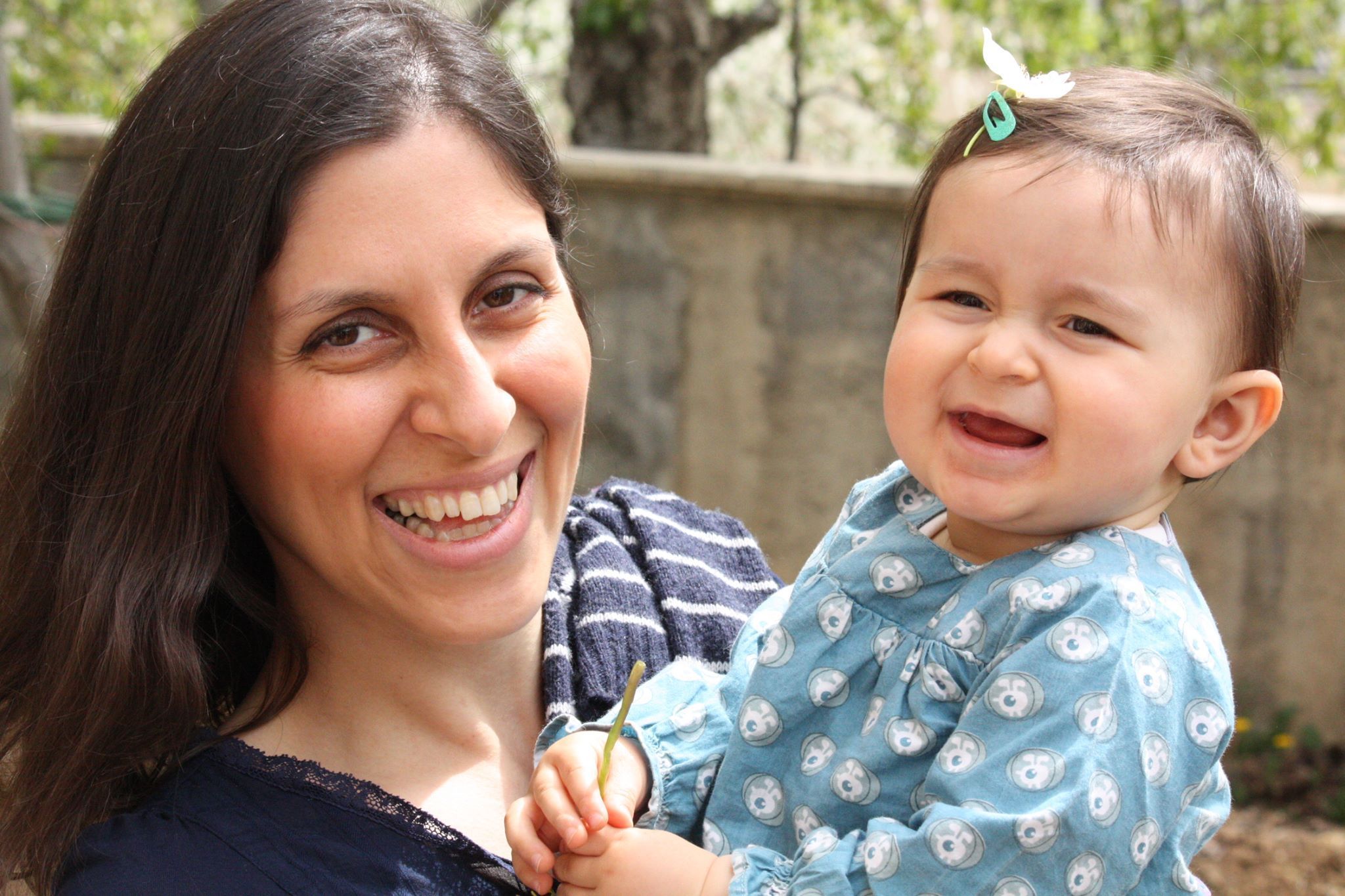 Why is the Brit mum in jail?

Nazanin was convicted of plotting the "soft toppling" of the Iranian government and sentenced to five years behind bars in September 2016.

She was set to become eligible for early release in late 2017 or early 2018 but was hauled back to court and confronted with two new charges that could see 16 years added to her sentence.

She was accused of joining and receiving money from organisations working to overthrow the Islamic Republic.

The dual national is also accused of protesting outside the Iranian embassy in London.

On August 23, 2018, she was given a three-day release from prison to visit her daughter – who is staying with an Iranian family.

Fears had been growing for her mental wellbeing, as reports claimed Nazanin was "suicidal" as she awaited a round of sentencing.

The mum is just one of several dual nationals held in Iran on espionage charges, likely to be used as bargaining chips in future negotiations with the West.

A UN panel of experts described the practice as part of an "emerging pattern" since the 2015 Iran nuclear deal.

On May 21, 2018, she was dealt a fresh blow when an Iranian judge told her to expect another conviction after appearing in court over a new "invented" charge.

On December 24, 2018, Nazanin's husband Richard joined Mayor of London Sadiq Khan to brand her incarceration in Iran on spying charges a "travesty of justice".

Campaigners have launched a fresh bid to free the British mum.

Foreign Office minister Andrew Murrison pressed Iran for the "urgent and unconditional release" of the British mum during a trip to Iran.

But Iranian Foreign Ministry Spokesman, Abbas Mousavi said: "Mrs Zaghari is an Iranian. She has been convicted on security charges and is spending her sentence in prison."

Her dual nationality is not recognised by Iranian laws. 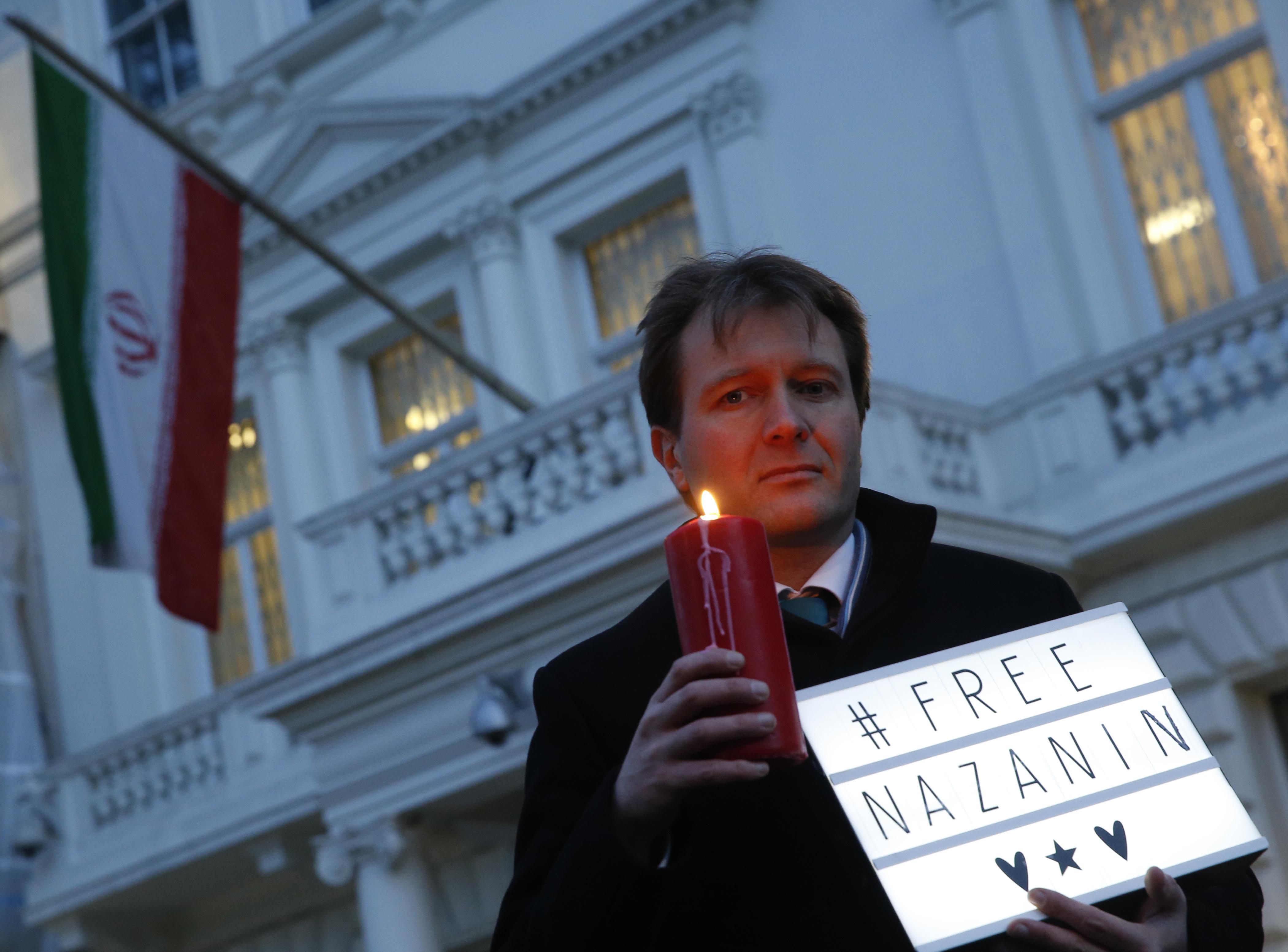 When did she return to jail?

A ray of hope emerged before Christmas 2017 after Nazanin was told she was "eligible for early release".

Nazanin's lawyer told the 40-year-old that her case was marked on the Iranian judiciary database as "eligible" for early release.

However, nothing came of the matter and she was stuck in the prison.

In August 2018 she was given a three-day release from jail to visit her daughter.

Emotional pictures released by the family showed smiling Nazanin hugging her daughter Gabriella as they were reunited.

She spent time with her family in Damavand, a town north east of Tehran.

The Free Nazanin campaign claimed Evin prison guards told her she had just ten minutes to get ready before leaving. 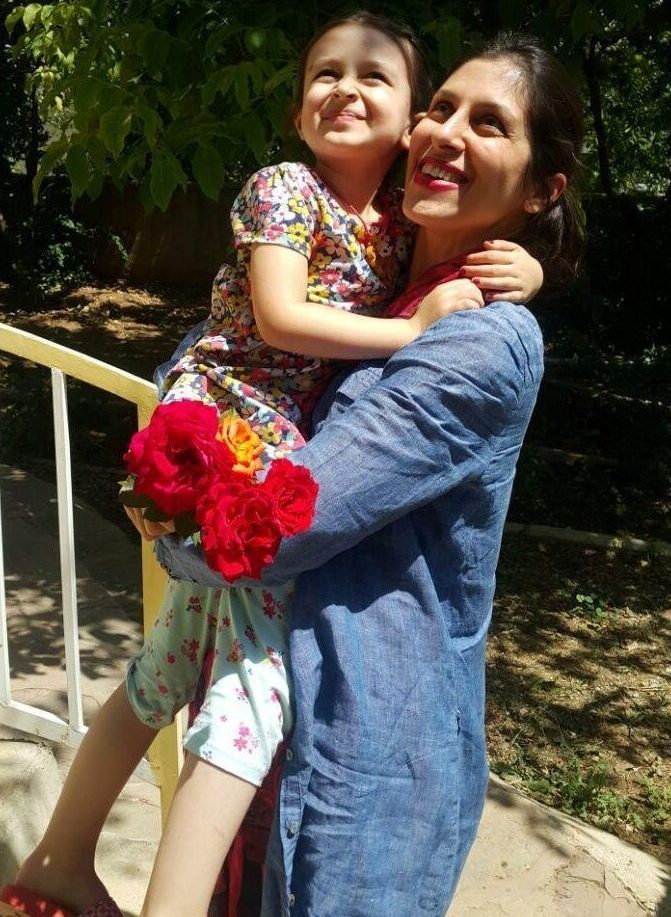 It added that she "dressed and packed quickly as her cellmates gathered round".

Nazanin Zaghari-Ratcliffe was hauled back into prison on August 26.

The 40-year-old had spent three days with four-year-old Gabriella and was hoping to get an extension to her temporary release.

However, despite promises from prosecutors that her furlough from jail would be extended, hours later she was back behind bars.

Speaking of the moment she was told to go back to prison, her husband Richard Ratcliffe said: "Nazanin waited for Gabriella to wake up before saying goodbye, and left her family home to return to Evin prison.

"She promised Gabriella that the next time she saw her it would be forever not just for a few days, for proper freedom, not just for furlough. And next time they will go back to London to be with daddy."

Nazanin decided to go into the prison voluntarily rather than be dragged out of the house in front of Gabriella when the Iranian authorities refused to prolong her release. 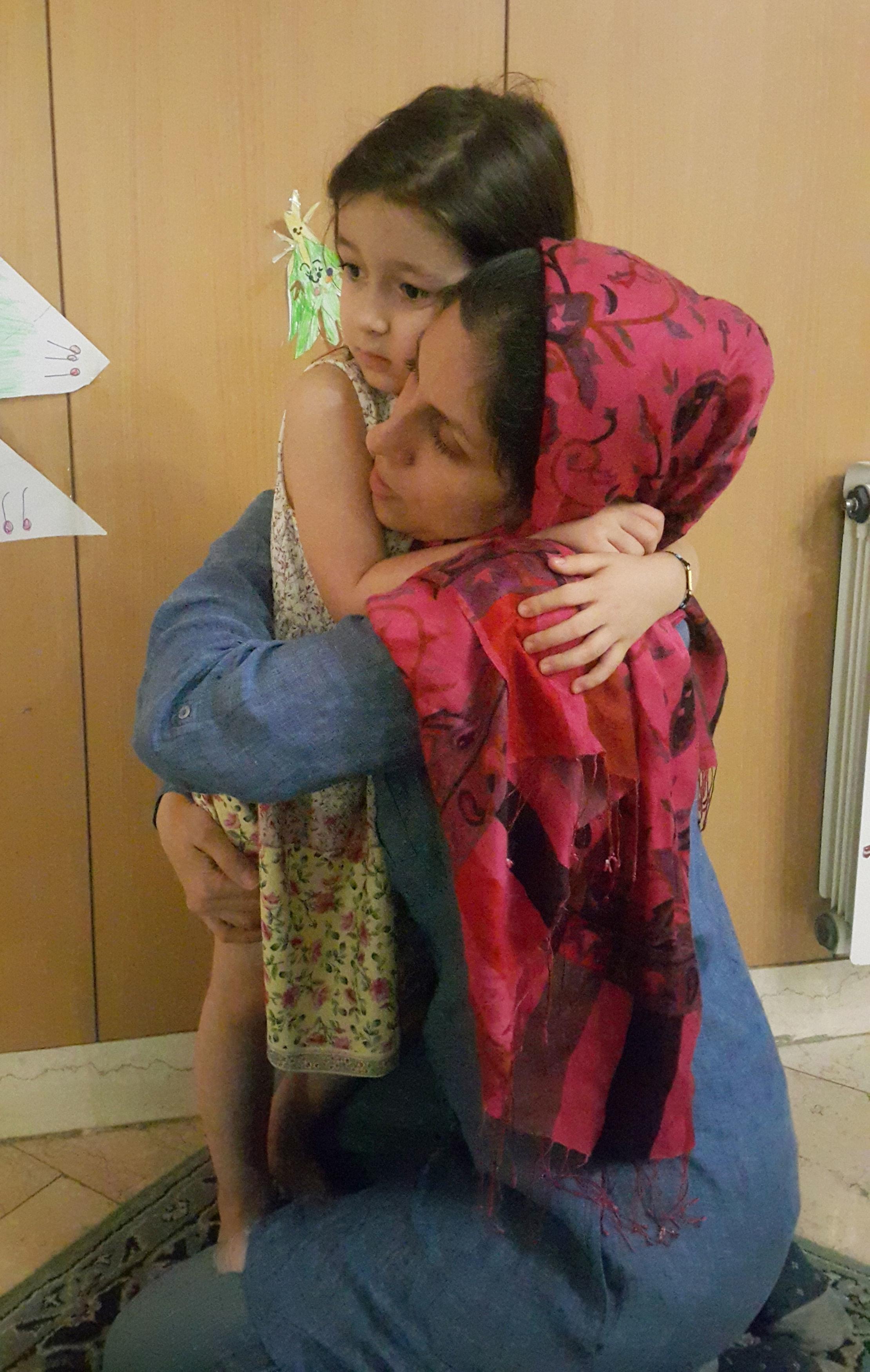 What happened to Nazanin’s husband and daughter?

Nazanin’s husband Richard Ratcliffe, an accountant who lives in North London, was not with her when she was arrested, and has been campaigning for her release ever since.

He called on the Government to do more to secure his wife’s freedom and set up a petition last year demanding action.

Richard blasted the latest charges by Iran, dismissing them as “games” that make the country “look foolish” and bring its legal system into disrepute.

In 2017, Boris Johnson was accused of making the situation worse by telling MPs Nazanin was teaching journalism when she went on holiday in Iran – a statement her family and her employer said was untrue.

Three days after Johnson's statement to a parliamentary committee, Nazanin was summoned before an unscheduled court hearing, where the foreign secretary's comments were cited as proof she was engaged in "propaganda against the regime."

Johnson admitted he feels "a deep sense of anguish" of the fate of jailed mum Nazanin.

But NoJo again denied that he is responsible for the fact she's languishing in an Iranian prison.

The couple's daughter Gabriella is being cared for in Tehran by her grandparents after the tot's passport was initially confiscated.

Why was she in hospital?

On August 29, 2018, an Iranian journalist tweeted that the British mum had been hospitalised.

Ershad Alijani, who works for France24, tweeted: "Nazanin Zaghari, after an anxiety attack in the prison, (was) transferred to hospital, (and) according her friends in the prison, she was not able to move her arms and legs and finally fainted."

And her husband Richard Ratcliffe told Mirror Online: "She definitely had two panic attacks … and passed out.

"She was definitely transferred to the prison clinic. I have not had it confirmed she has been sent to an external hospital yet."

On December 30, 2018, it was reported she had been denied a doctor visit despite finding lumps in her breast.

Why did Nazanin go on hunger strike?

The British mum went on a hunger strike in her Iranian prison cell after being denied access to medical care  after finding lumps in her breast, however they have now ended their strike.

Her husband Richard claims she is also in constant pain due to an undiagnosed neurological condition and needs a mammogram and MRI scan, but prison officers have allegedly refused to let her see a doctor.

In protest of the refusals for medical help, Nazanin went on a hunger strike in her cell at Tehran's Evin prison.

She announced her decision in a joint letter with a fellow prisoner, the human rights activist Narges Mohammadi.

The women said they have planned an initial three-day hunger strike, which was going to be extended until their demands are met.

Richard and Nazanin went on hunger strike again in June 2019.