McEnany said in a statement on Twitter that she tested positive on Monday morning, local time, and was not experiencing any symptoms. 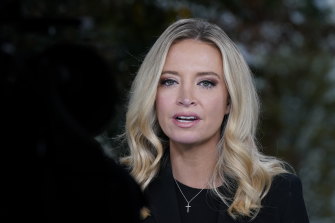 Kayleigh McEnany said she was not experiencing any symptoms after testing positive for COVID-19.Credit:AP

She spoke briefly with reporters on Sunday evening, but said that no members of the White House press corps spent enough time around her to be considered close contacts.

McEnany, who frequently interacts with senior White House officials, said that she was beginning the quarantine process and "will continue working on behalf of the American People remotely".

McEnany also said she did not know that senior Trump aide Hope Hicks had tested positive for COVID-19 before she held a press briefing on Thursday without a mask, a decision that has come under scrutiny for potentially exposing reporters and others present.

The announcement came as White House officials said they were hopeful that President Trump would be discharged later on Monday from Walter Reed National Military Medical Centre in Bethesda, where he was being treated

White House chief-of-staff Mark Meadows said a decision on whether to release Trump would be made after a late-morning meeting with doctors.

Trump's Twitter account was active throughout the morning, however, with unrelated political messages, mostly in all capital letters, urging supporters to vote. It was unclear whether Trump or his social media aide Dan Scavino wrote them.