Australia’s vaccine rollout has so far been overhyped and under-delivered.

The first announcement, in August last year — that Australia had negotiated vaccine deals — set the tone for the rollout of “announceables”. Within hours, this initial announcement unravelled as it became clear it wasn’t a “deal”, but in fact a letter of intent. 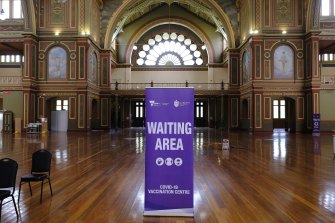 The Royal Exhibition Building has been set up as a mass vaccination area.Credit:Luis Enrique Ascui

Some of the shortfall is due to problems with international supply chains. The European Union blocked some deliveries to Australia. The federal government should have immediately shared the implications of this with the public, but delayed disclosing the reality until forced to do so at Senate Estimates a week later.

Delivery of vaccines from the warehouses to states or GPs has been a debacle. Neither the states nor GPs knew from one week to the next how many vaccines they were due, which made planning impossible. GPs booked patients expecting hundreds of doses but got a fraction of that, causing massive extra work to cancel appointments.

States ended up with doses on hand that they haven’t been able to distribute to hospitals, and came under political attack from some members of the federal government. The tension mounted and the behind-the-scenes political disputes came out into the public domain as some states defended their performance.

Bungling the message, has been the fourth mistake. The federal government’s original plan was to “underpromise and overdeliver”, according to Hunt. But the reverse is a better description of what has played out.

A more logical approach would have been to implement more phases, each with smaller numbers, and to make the phasing consistent with local production by CSL, which aims to manufacture about one million doses per week.

The biggest problem with the relentlessly optimistic political messaging is it makes it harder for the government to admit its mistakes, learn from them, and reset the rollout.

The government should engage with the states, not alienate them.

What’s more, it should set realistic targets to get vaccines into arms as quickly as possible and be prepared to admit when it falls short.

This piece was reproduced from The Conversation.