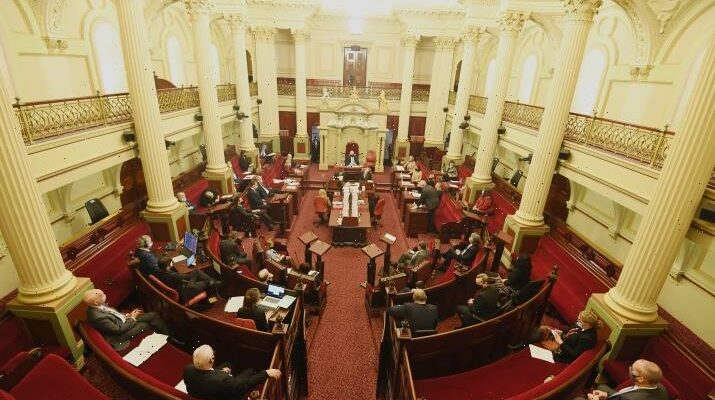 As protestors gathered outside the Victorian Parliament to protest the Andrews government’s wide-reaching draft pandemic laws on Monday, a lone young man stood on the roof of his car armed with a crossbow before being swiftly arrested by police. 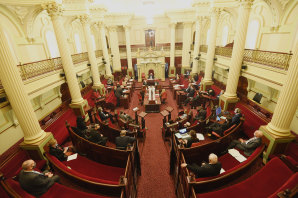 The proposed laws have been divisive and the debate at times toxic. Animal Justice Party MP Andy Meddick – whose support will be key to passing the legislation when it comes before the upper house next week – has revealed he, his family and his staff have been relentlessly harassed, including receiving death threats.

This week his office received a condom in the mail with a note reading, “Enjoy some of my fresh herpes!!!”

Victoria’s draft Public Health and Wellbeing Amendment (Pandemic Management) Bill 2021 will go to Victoria’s upper house next week for voting, although the opposition has vowed to try to delay its passage.

Where have these proposed laws come from?

Victoria has been operating under a state of emergency since March 2020, but state of emergency laws were never designed for a long-running pandemic. After a state of emergency is declared, the Chief Health Officer has broad powers to impose legally binding rules to limit the spread of the pandemic disease – for example, restricting people’s movement and enforcing mask wearing. These powers are usually available to the CHO for four weeks, but can be extended by up to six months.

The current state of emergency is due to expire on December 15. In March, the government promised three upper house crossbenchers it would introduce pandemic-specific laws to replace the state of emergency. The government has been negotiating with the three MPs – Reason Party’s Fiona Patten, the Greens’ Samantha Ratnam, and Animal Justice Party’s Andy Meddick – on its proposed laws since then.

What’s the likelihood they’ll be passed?

It’s all but certain they will pass, given the government has already secured the support of the three upper house crossbenchers. With those MPs’ support, Labor will have the numbers to push the Bill through, although it’s likely the crossbench will move some amendments to further strengthen transparency and oversight of the laws.

What changes is that instead of the CHO, it would be the Premier’s role to make a pandemic “declaration” on the advice of the CHO and the health minister. The health minister would then make pandemic orders after consulting the CHO. They could include limiting people’s movement, closing businesses, banning gatherings and so on.

The Bill also introduces a new requirement for the government to provide explanations about the health advice underpinning any public health orders, and how the orders affect people’s human rights under the Charter of Human Rights and Responsibilities.

Under the draft laws, a pandemic declaration could be renewed for up to three months with no outer limit on how many times a declaration can be renewed.

What measures have people praised?

The improved transparency around decision-making has been widely welcomed.

Supporters of the Bill say this increases transparency because, unlike the CHO, the Premier and health minister are accountable and answerable to voters and to the Parliament.

The proposed laws require the government to table in Parliament within a fortnight a statement of reasons, including the CHO’s health advice, it relied upon to declare a pandemic. The government would also be required to provide an explanation of how the orders affect people’s human rights under Victoria’s Charter of Human Rights and Responsibilities.

According to Liberty Victoria, while the Bill isn’t perfect, it is “an improvement in regulating the very extensive executive powers that already exist”. It says that under the current state of emergency, there are “few checks or balances on the exercise of state of emergency powers — including by Parliamentary oversight or scrutiny”.

What are the points of contention?

The Victorian Bar, the professional association representing some 3000 barristers in this state, said the Bill sought to take powers that had been used in a crisis conditions and render them “ordinary”. It said there was “grossly insufficient Parliamentary supervision over the Minister’s exercise of that power [to make pandemic orders]“.

Instead, there would be two oversight mechanisms: an independent panel appointed by the government – leading some critics to question its independence – and the cross-party Scrutiny of Acts and Regulations Committee (SARC).

SARC, which scrutinises all bills and regulations that come before Victorian Parliament, will also consider new pandemic orders put in place by the government. But the proposed legislation limits the committee’s capacity to place limits on pandemic orders, Associate Professor William Partlett of the University of Melbourne’s law school told this masthead.

More than 60 QCs have now signed an open letter to the government arguing the extraordinary powers the health minister would be able to wield under these draft laws should be limited.

One key criticism is that once a pandemic is declared, the health minister can make any order they believe is “reasonably necessary to protect public health”, giving the minister extraordinary and ongoing power that is almost impossible to challenge. The QCs said that, as in other jurisdictions, this power should not be open-ended but should be limited to specific powers such as borders closures, mask mandates and lockdowns.

“It is one thing to allow temporary rule by decree to deal with an unforeseen and extraordinary emergency in circumstances of extreme urgency. It is something else altogether to entrench rule by decree as a long-term norm. In our view, this is antithetical to basic democratic principles and should not be allowed to happen,” they said.

Further, the Victorian Bar observes: “whilst the Bill allows for the Scrutiny of Acts and Regulations Committee to suspend the Minister’s pandemic order, it also allows for the Governor-in-Council, on the recommendation of the minister, to then declare it not suspended.”

Victorian authorities have placed people, including children, in 14-day quarantine throughout the pandemic – even, Liberty Victoria points out, when there have been no cases of COVID-19 in the community.

But the Bill has come under heavy fire for the provisions relating to the detention of people. It gives authorised officers the power to detain people if they are satisfied detention is “reasonably necessary” to reduce or eliminate risks to public health.

People’s detention must be reviewed daily by authorised officers, and they would have the right to apply for review by a Detention Review Officer, or to the Supreme Court for a writ of habeas corpus [which requires prisoners or detainees to be brought before court to assess whether their detention is legal]. However, the Bar argues this is insufficient when all that is required for detention to occur is an authorised officer being satisfied detention is “reasonably necessary”.

What penalties are built in for non-compliance?

The proposed laws introduce the harshest fines for non-compliance in the country.

Anyone who knowingly breaches a health order and, in the process, causes serious health risks to another person would face up to two years’ prison.

A person who failed to comply with a health order, knowing it could cause serious health risks to others, would face a maximum fine of $90,500, while businesses face up to $452,500 in fines for rule breaches. The government says these maximum penalties would be used “rarely” for those who knowingly put public health at risk and not for minor or moderate breaches.

In NSW, the maximum penalty for an individual is $11,000, imprisonment for six months or both, with the risk of $5500 each day the breaches continue. Businesses face maximum penalties of $55,000 and $27,500 for each subsequent day of breaches.