A Wetherspoons customer has used the Eat Out To Help Out scheme to help feed the homeless in Manchester.

Dominic Dietrich, a freelance sports reporter, used the Government scheme to buy discounted food, which he then distributed to people living on the streets in the area.

‘On the first day of Eat Out To Help Out I was having food with mates in a restaurant for a fiver. I had a bit of a weird feeling thinking this could be used to help someone much more than me,’ Mr Dietrich, 25, told the PA news agency.

‘If you thought your 2020 was hard, imagine what it’s like for these people who have nowhere to go.’

He said he hopes the viral video ‘encourages other people to do the same’.

In the clip, filmed and shared by Mr Dietrich’s friend Rob Adcock, the pair can be seen going into a Wetherspoons and encouraging friends to send food via the chain’s Table App.

The two then transferred the discounted food into plastic containers and took it to several people living on the streets of Manchester. 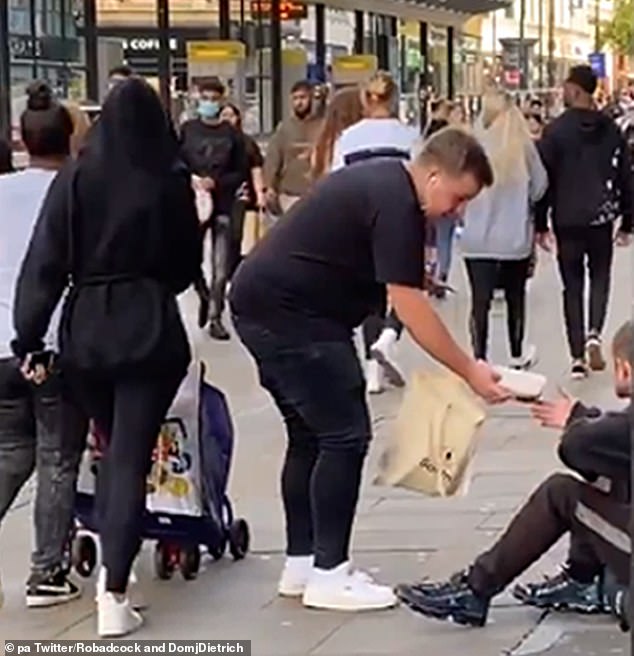 Dominic Dietrich, a freelance sports reporter, used the Government scheme to buy discounted food, which he then distributed to people living on the streets in Manchester

‘I’ve lived and worked in Manchester for just over a year,’ Mr Dietrich said in the video. ‘The one issue I keep seeing is the issue with homelessness.’

The reporter said he himself has lost out on work due to the ongoing pandemic.

He told PA: ‘I was sat there during the pandemic in my flat and I was being hard on myself because a bit of work has disappeared, but I’m sat in a flat with a roof over my head… I had to check myself a bit.’

Mr Dietrich said that helping the homeless is even more crucial now that many establishments are going cashless due to the coronavirus pandemic. 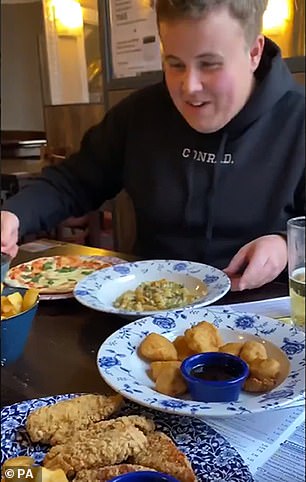 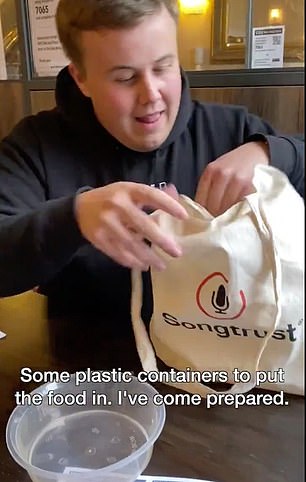 In the clip, Mr Dietrich and friend Rob Adcock are seen going into a Wetherspoons and encouraging friends to send food via the chain’s Table App, before they package it up in boxes for the homeless

‘You think of that disappearing out of their income, it’s heartbreaking and devastating.

‘My mum’s always been aware of it and encouraged me to help out where I can… To actually go out and do it was incredible, it felt amazing.’

‘I handed out meals to six or seven people, but the problem’s so much bigger than that,’ Mr Dietrich told PA.

‘The whole point of the video was to encourage other people to do the same wherever there are.

‘So many people have got in touch saying next time they’d love to help and send food. We’d hopefully do it on a bigger scale if we were to do it again.’