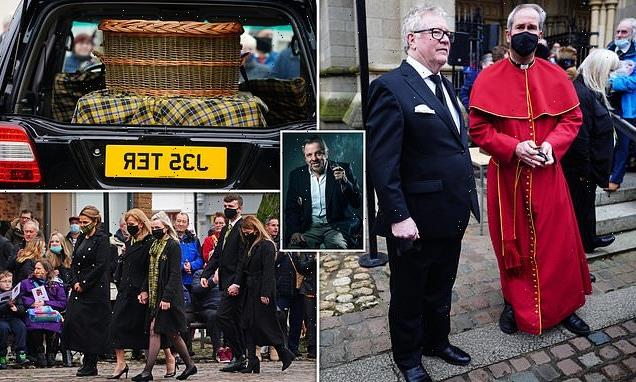 Jethro’s last laugh: Coffin of Cornish comedy legend arrives at his funeral in hearse with J35STER number plate as stand-up comedian Jim Davidson prepares to lead tributes to funnyman who died with Covid

The funeral of Cornish comedian Jethro is set to take place this afternoon at Truro Cathedral where friend and fellow comic Jim Davidson is expected to lead tributes to the popular funnyman.

The Cornish comic died on December 14 at the age of 73 after contracting Covid-19.

Real name Geoffrey Rowe, the comedy star built his name in the 1980s and 1990s, only announcing his retirement in 2020 after almost 50 years of touring.

A funeral procession set off from Lewdown, Okehampton, at 10am on Monday, and travelled through Lifton before going on to Truro where a procession was held at the War Memorial.

Hundreds of people gathered along the route of his final journey from his former Jethro’s Club in Lewdown on the Devon border with Cornwall, down the A30 to Truro Cathedral.

The service, at Truro Cathedral, was due to begin at around midday and was conducted by the Reverend Canon Alan Bashforth and Reverend Tim Hodge. 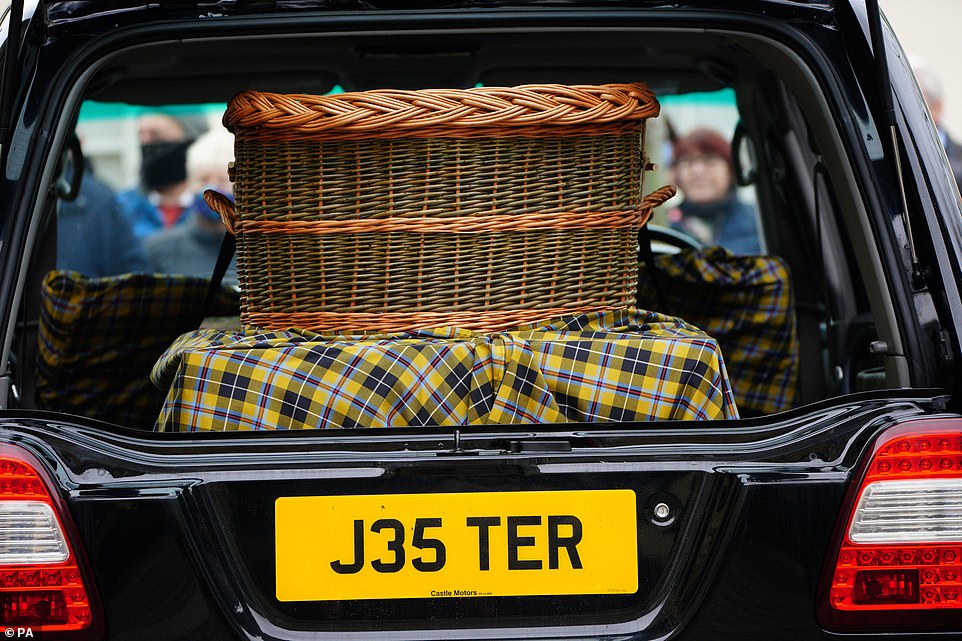 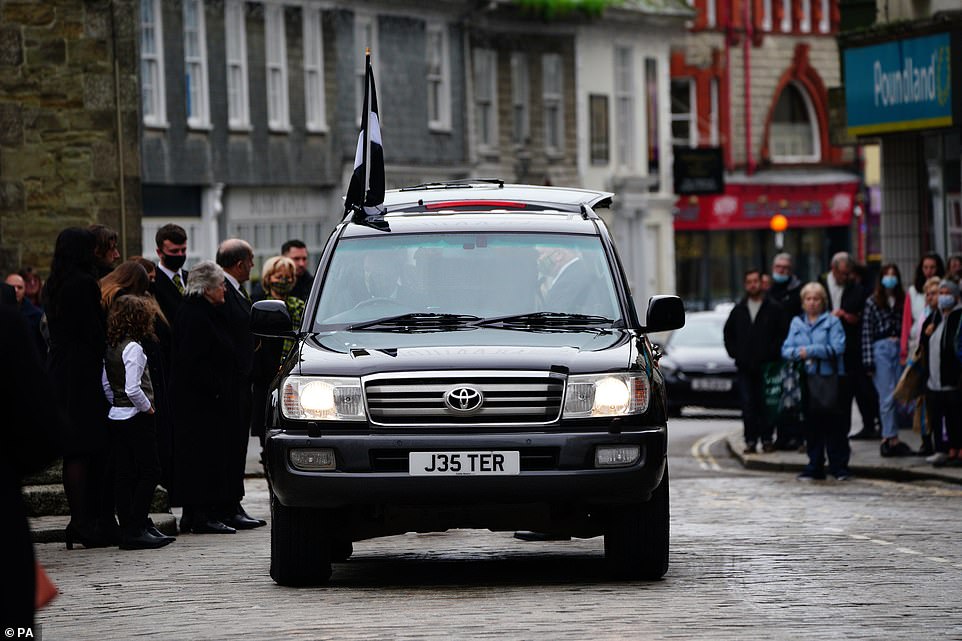 The car carrying the coffin, with personalised number plate J35TER, arrives for the funeral at Truro Cathedral in Cornwall 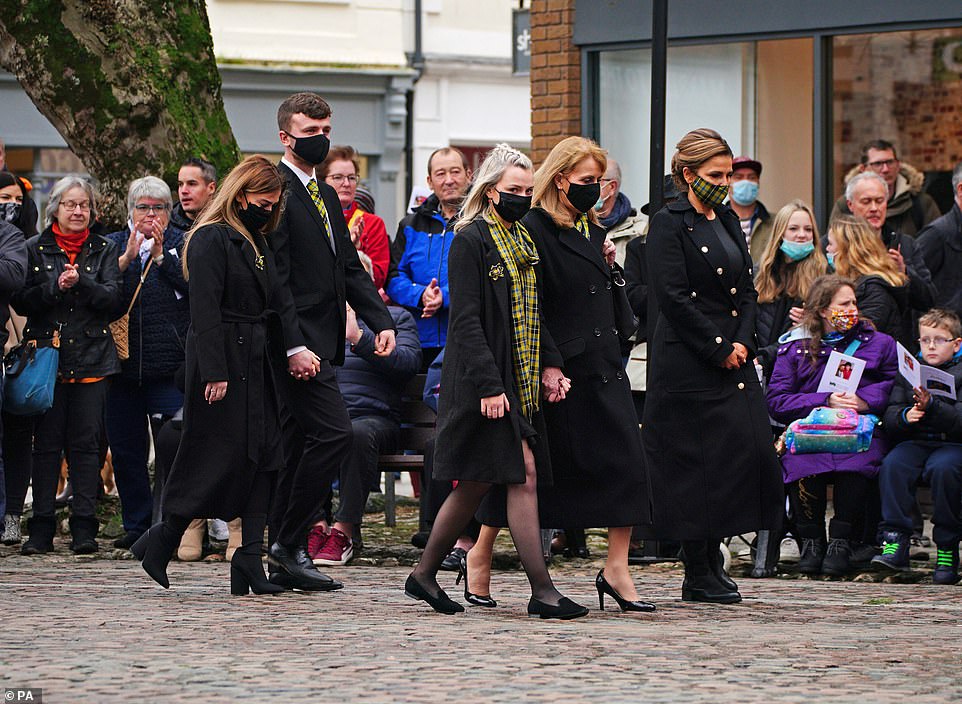 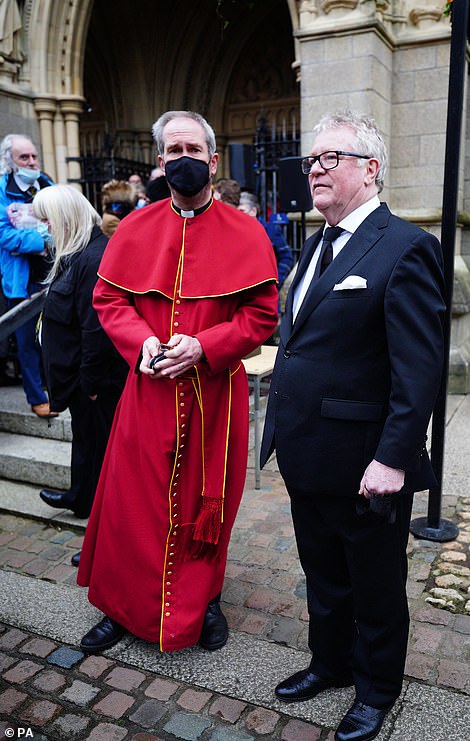 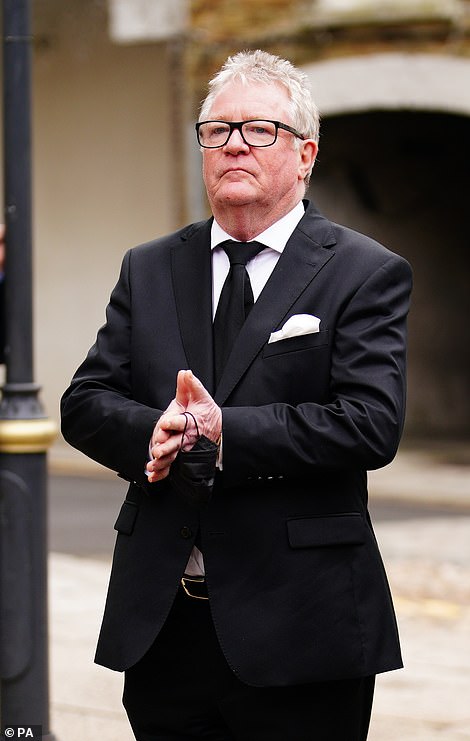 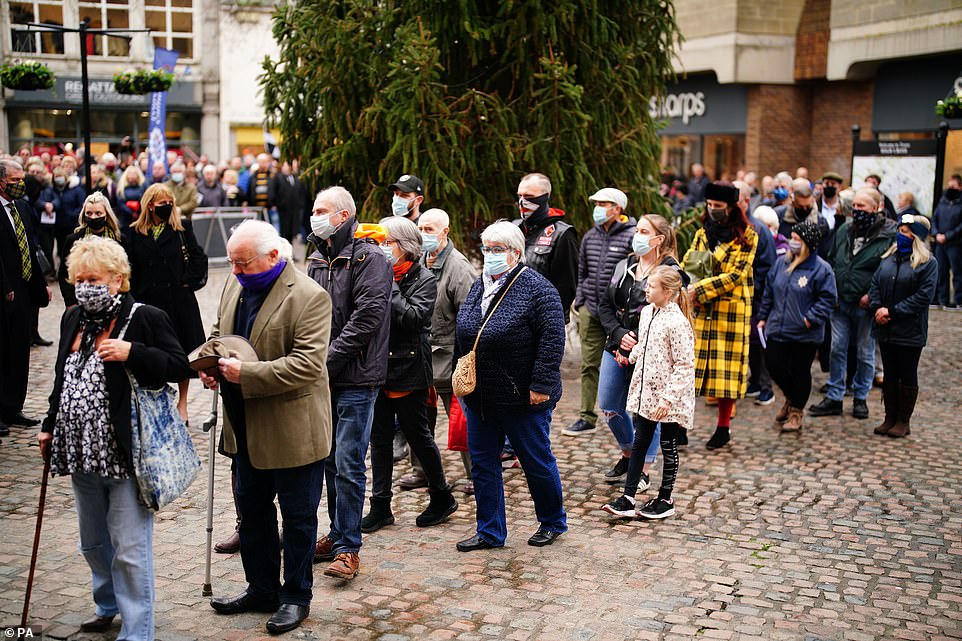 Pictured: Mourners arrive for the funeral of Cornish comedian Jethro at Truro Cathedral in Cornwall this afternoon 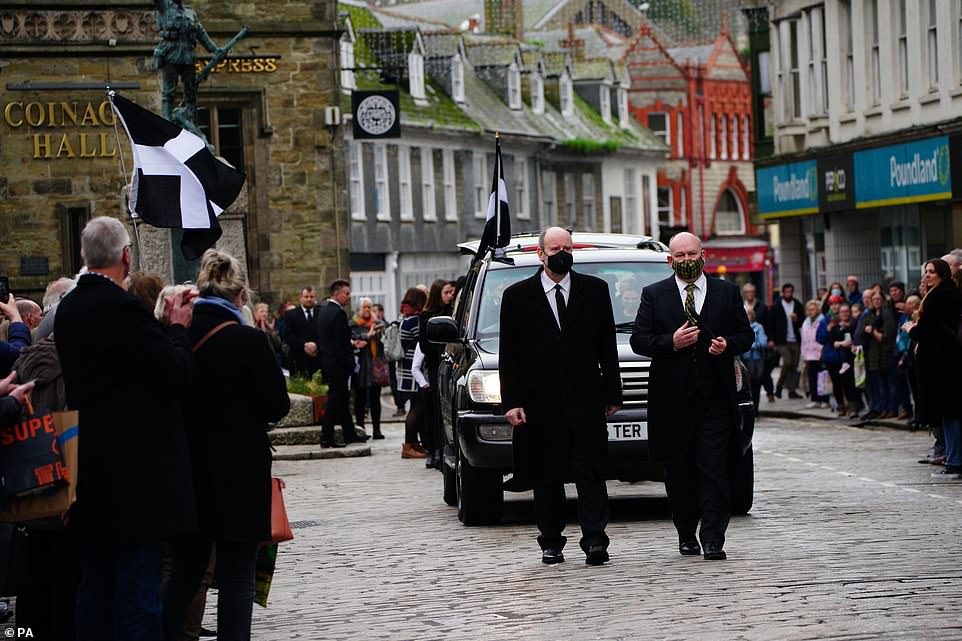 The funeral cortege leads the mourners as they arrive for the funeral after a procession began at Lewdown, Okehampton 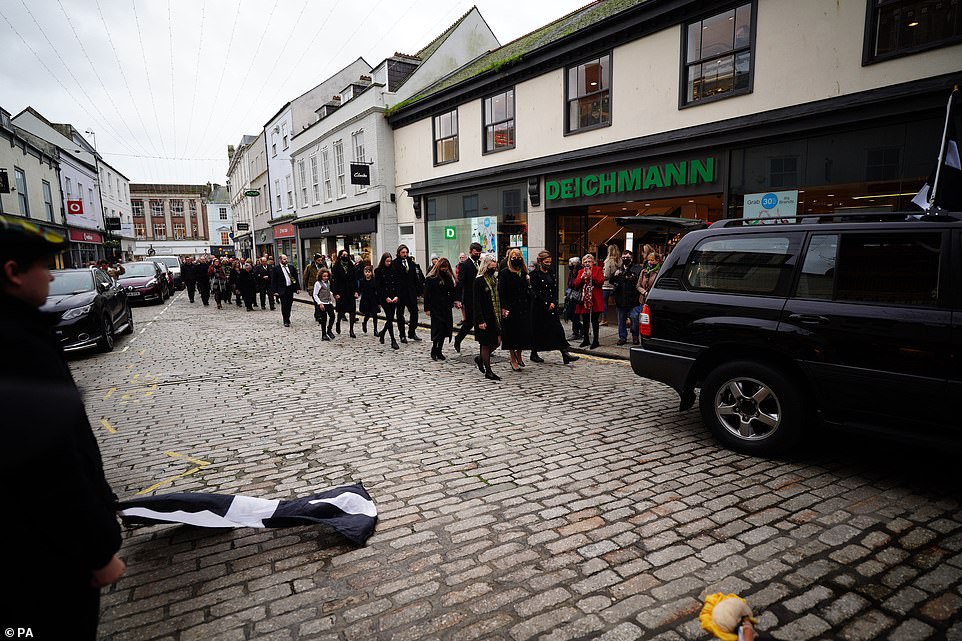 Pictured: Parts of Devon and Cornwall came to a standstill this morning as the procession made its way to Truro Cathedral 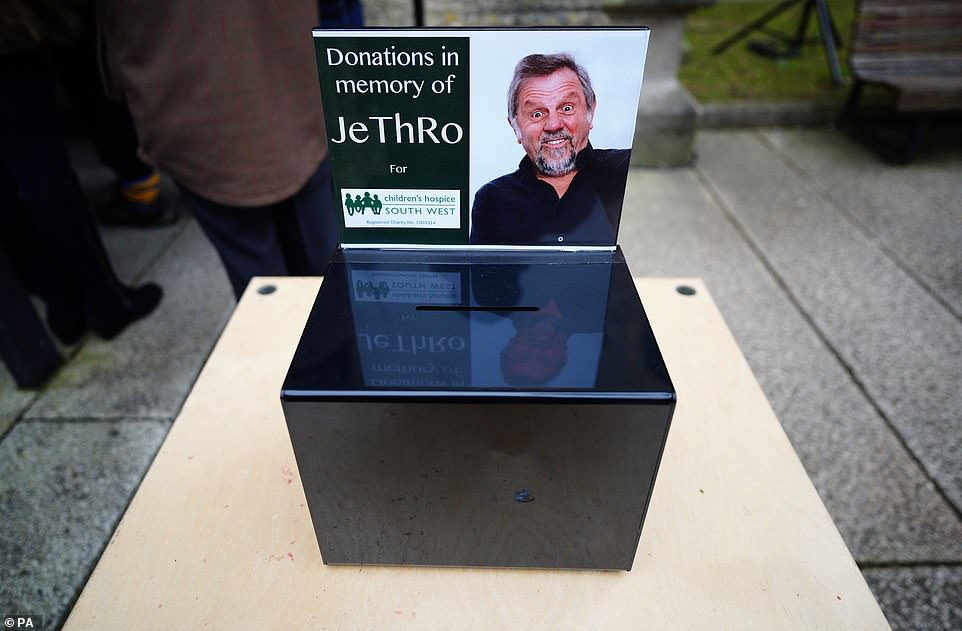 Jethro was placed in a wicker basket on a Cornish tartan in the final Landcruiser, his beloved car, which had been especially adapted – like the Duke of Edinburgh did with his Land Rover for his funeral.

Among the crowd at Truro Cathedral were three brothers called Rowe – who were not related – but had travelled from their homes in France, Scotland and Cornwall to pay their respects to the proud Cornish funnyman.

Banners hung from bridges on the route and the cathedral was packed with people wearing tartan, Cornish rugby shirts and St Piran flags – and a round of applause rang out as the hearse arrived.

Jethro’s partner Jennie and sons Jesse and Lanyon led the mourners at the cathedral service which was opened up to the public, before going onto a private family burial service.

Outside one woman wept: ‘He is incredible and we will never see his like again.’

A man said: ‘He was a brilliant comedian, a hell of a guy.’

It is understood a eulogy was read out on behalf of Jethro’s family, and speakers included his long-time agent John Miles and stand-up comic Jim Davidson.

Hymns including The Old Rugged Cross and Trelawny were sung accompanied by Cornish folk band The Oggymen.

Manager John Miles said Mr Rowe had battled Hodgkin Lymphoma two years ago but was in remission and was otherwise in good health when he caught the virus.

Speaking shortly after his death, Mr Miles said: ‘They did all they could do – it was just so aggressive and fast.’

He told MailOnline Mr Rowe was fully vaccinated and had had a booster jab but contracted the virus just 10 days before his death. 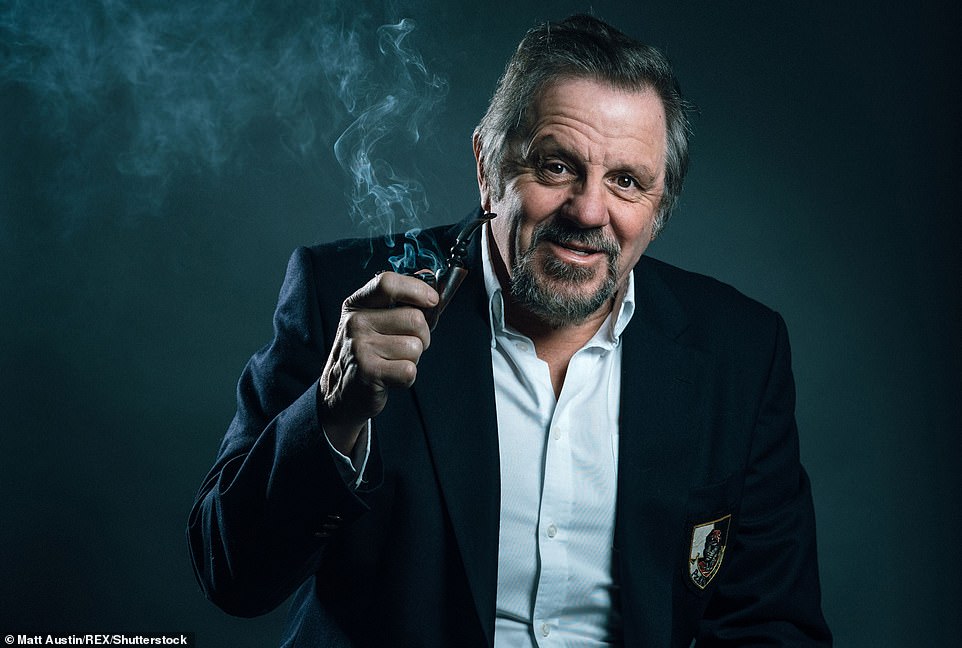 Comedian Jethro, real name Geoffrey Rowe, who was famed for his west country take on life died after battling Covid-19 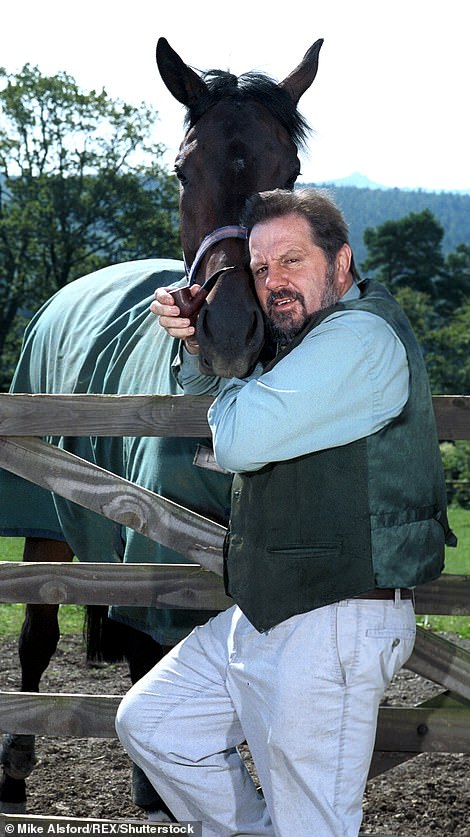 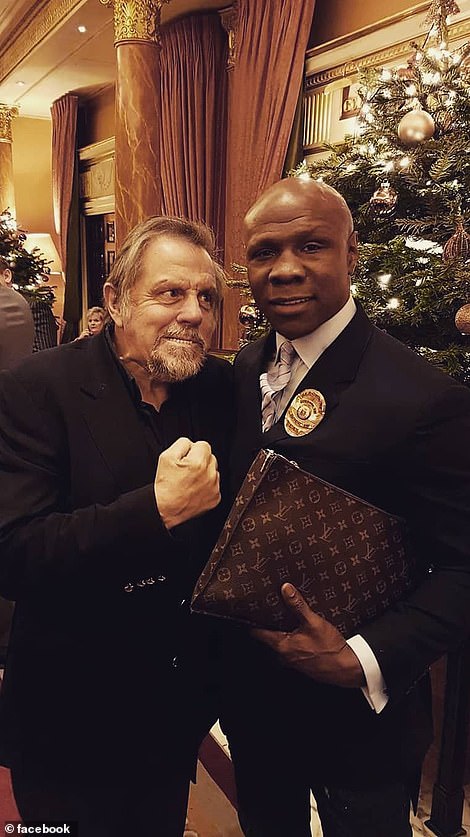 The much loved 73-year-old comic (pictured, left, and, right, with boxer Chris Eubank) shot to fame in Cornwall in the 1980s and made his first TV appearance in 1990 on the Des O’Connor Show and later appeared on Jim Davidson’s programmes 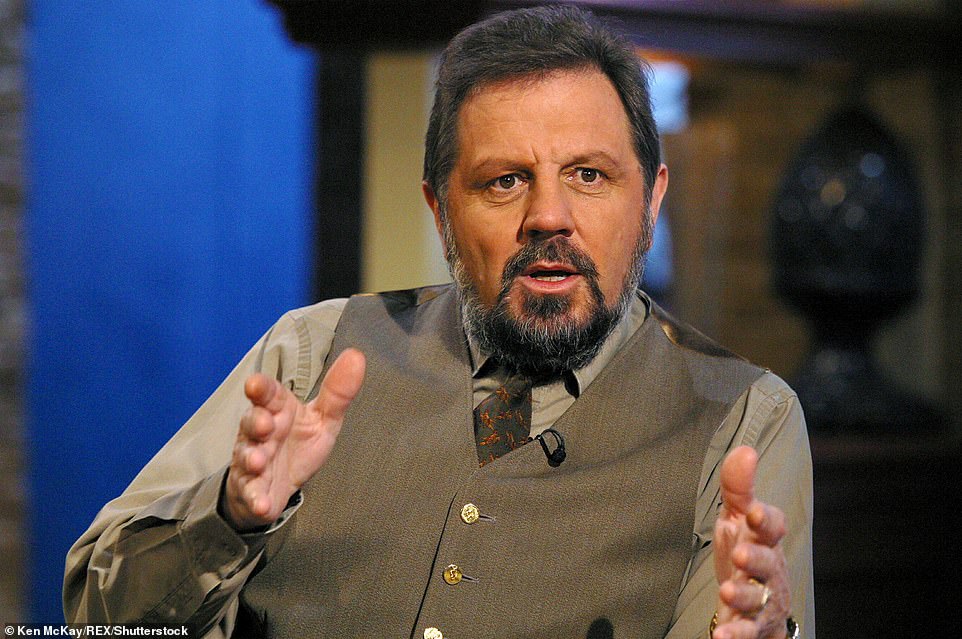 Pictured: Jethro was fully vaccinated and had received a booster before he contracted Covid and died in hospital 10 days later 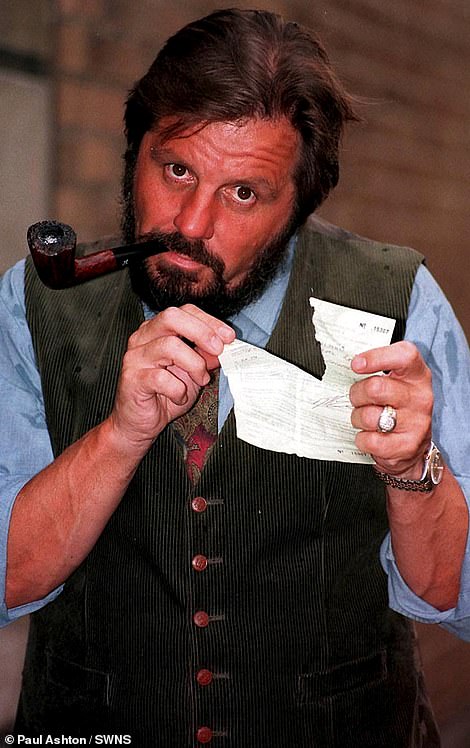 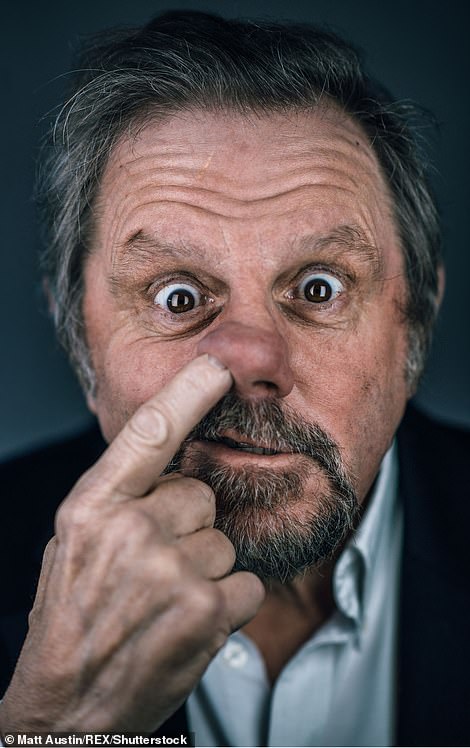 Paying tribute to his friend of more than 40 years, Mr Miles said Jethro brought a lot of joy to millions of people.

He added: ‘He was a lovely guy, a very kind guy and very funny. At least he brought a lot of enjoyment to many people.’

Friend and fellow comic Jim Davidson is expected to lead tributes at the service this afternoon.

‘We’re all in shock. These things happen so quickly.

‘He was a great comedian, Jethro. He just liked to tell jokes – his timing was immaculate.

‘He was unique, he didn’t follow fashion, certainly not. But I never met anyone who had a bad word to say about him and that’s the measure of a man for me.

‘A great guy and I’ll miss him. We’re going to do a tribute for him on Christmas Day.’