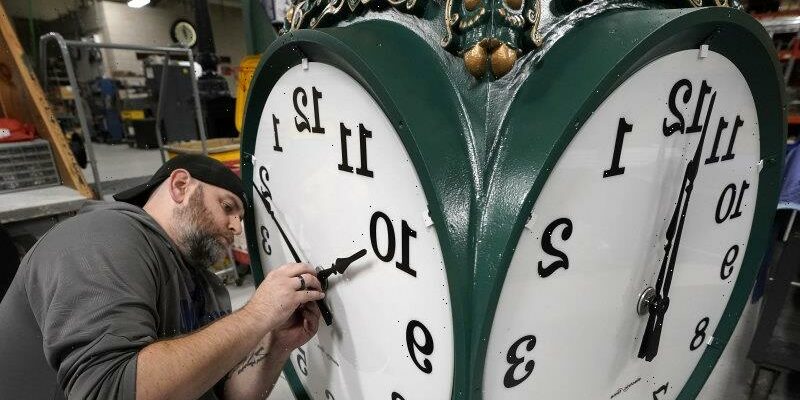 About the only thing I like about changing the clocks for daylight saving is that heavy feeling of jet lag when my alarm goes off. For just a minute, it feels as if I’ve gone somewhere exciting like overseas and done something new.

But then I wake up properly and have to pry the children from their slumber, clothe them, feed them and extract them, yawning, from the house. 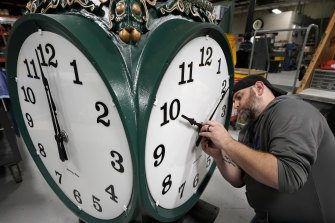 Daylight saving ends at 3am on Sunday. Clocks should be turned back an hour.Credit:AP

Yes, yes, we all love lingering summer evenings. But oh what a price is paid by night owls like me. That first Monday in late spring after daylight saving feels like moving through treacle. The day is unbalanced. Then the whole week. And at the other end, when clocks go back so we can get more winter morning and less light in the evening? No thanks. I’d prefer coming home with a little daylight left. The world is already geared enough to smug morning types returning from 10-kilometre runs and 50-kilometre bike rides, suffused with health, vitality and their inevitable next promotion.

That’s why I perked up when I read that the US may be making daylight saving time permanent through the lovingly titled Sunshine Protection Act. Backer Marco Rubio, a Republican, noted that while it was not the biggest issue facing America (correct), it was one that had a lot of agreement.

I guess when we’re confronted by disasters and threats on many fronts – war, catastrophic floods, climate change, pandemics – it’s comforting to focus on something we can get right.

But what is the right answer? At a recent US hearing on the issue, sleep expert Beth Malow described clock-switching as like “living in the wrong time zone for almost eight months of the year”.

Should we follow suit? Anything would be better than the status quo. As it stands, we’re a nation divided: the NT, Queensland and WA scorn daylight saving. They understandably find it far better to rise early and get things done before the sun scorches their eyeballs. By contrast, our cooler southern states have all opted for daylight saving over summer.

What this means is if you live along the NSW/Queensland border you’ll find yourself constantly switching between time zones, despite the sun being in the same position in the sky. There’s a major divide in Queensland between daylight savers and daylight spenders (my coinage, may not catch on). South-east Queenslanders broadly want daylight saving, while the farmers of the north and west absolutely do not.

We’ve had national agreement before, during both world wars, when daylight saving time became permanent to save energy by making the most of evening light. After the war, we abandoned it until 1967, when Tasmania brought it back in to help tackle a drought by reducing power and water consumption. (No, I’m not sure how daylight saving reduces water use.)

So what to do? Is there a solution that will please everyone? I doubt it. But there’s a case for picking one timezone – daylight saving or standard – and making it permanent across Australia. Less confusion. An end to changing clocks, and the spike in angst, heart attacks and car crashes that come every year when we just all decide to change what time it is.

Experts in the field of chronobiology have made their preference fairly clear: abandon daylight saving altogether as a failed experiment. Why? Because we have totally messed up our biological rhythms with our flagrant use of artificial lights at night.

We once lived by the sun clock, which has the benefit of being large, hot and hard to sleep through. Now we live by the social clock, which is so malleable it’s as if we’re just making it up. (It’s kind of wild we all agree to just call 8am the new 9am and shame everyone into following suit.)

So here’s my suggestion for better living through daylight:

First, the federal government should unilaterally end daylight saving. Second, move the starting time of work and school to 9.30am. Give our sleep-deprived teenagers (and me) the extra sleep they need. This will also accommodate the nation’s tradies and the north’s farmers for whom the early morning hours are sacred.

Doug Hendrie is a Melbourne writer.

Daylight saving ends at 3am on Sunday. Clocks should be turned back an hour.