Onboard the merchant ship the Anastasia, four crew members are on suicide watch.

“They need to go home immediately or something worse will occur,” says Gaurav Singh, 29, second officer of the ship that has been stranded at anchor for nearly five months off the Caofeidian port on the Chinese coastline.

An estimated 1500 seafarers are stranded in Chinese harbours “essentially as pawns of war”, according to Dean Summers from Maritime Union of Australia. 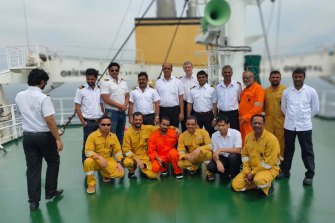 There are fears for the mental health of the stranded crew, pictured on the Anastasia this week.

The crews are held hostage to import restrictions imposed on Australian coal as part of a wider geopolitical feud between the two nations. Companies keen to offload thermal coal to their Chinese buyers have kept the ships at anchor hoping for a resolution, but that option disappeared when China formally banned Australian coal imports on Tuesday, throwing the $14 billion export industry into turmoil.

Onboard the Anastasia are 18 seafarers – 16 of them Indian, one Russian and one Filipino – forced to work at sea for far longer that their current anchorage, with crew clocking up to 20 months as ports refuse to let them disembark for fear of spreading contagion.

Maritime Labour Convention state the maximum time for a stint at sea is 11 months. “Frankly,” says Singh, “we are in bad shape. Helpless and depressed.” 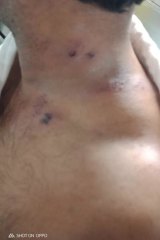 Seaman Gaurav Singh says many of the sailors are suffering from painful skin conditions.

Chinese port authorities have informed anchored crews that individuals can only go onshore if a doctor certifies a specific medical emergency. But the crew are sick and have injuries that have gone untreated for months, Singh says. He sends a video of brown water gushing out of a tap. “The drinking water is bad,” he says, following the footage with several pictures of angry-looking rashes on his skin. “This is happening to many of us and they’re not healing.”

A seafarer for 10 years, Singh says he has never experienced anything like this. Five days maximum, he says, to get a berth at a Chinese port. Never five months.

Also onboard the Anastasia is 61-year-old Gajanand Tandel. He has been at sea for 17 months. His daughter Jimmy Tandel has been urging the ship’s owner, the Mediterranean Shipping Company, to take action. “But they do not seem to take me seriously.”

A company official wrote back to her that the vessel owner has given crew members on the Anastasia $US500 ($661) as a “token of appreciation” and is trying to bring the crew home. This is no solace. As the days wear on, Tandel fears people onboard the ship will unravel.

“A tragic incident occurred on another MSC ship in September where a crew member was murdered,” Tandel says – a crew member of the MSC Ravenna is standing trial in Los Angeles, alleged to have stabbed another seafarer 17 times. “I feel my father is no more safe on this ship.”

So who is responsible for crew of the Anastasia?

Many attempts have been made to relieve the crew aboard Anastasia, a spokesman for the Mediterranean Shipping Company insists in an emailed reply from the Geneva head office. But while the Anastasia is listed as MSC-owned, “it was chartered out to third parties some months ago, so it was not MSC determining the cargo to be carried or the commercial movement of this ship which has led up to this situation.” 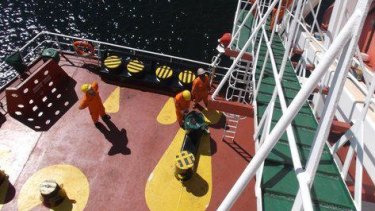 The crew of the Anastasia say they are forced to work for months at sea while exporters wait to unload coal to their buyers.

Nothing is simple in the maritime industry

There are ship owners, commodity traders, sellers and receivers, shipping agents, charterers and sub-charterers. To really muddy the waters, vessels can be registered in a different country from the ship owner altogether.

To top it off, the MSC has registered the vessel in Panama, a nation known for its open ship registry and track record of failing to investigate deaths at sea, forcing seafarers to serve longer stints and underpaying crew. Achieving a Guinness World Record in 2017, the tiny country boasts the largest registry of ships in the world, looking at over 8000 ships sailing its flag.

A 2017 federal Senate inquiry into ‘flags of convenience vessels’ recommended a review of the risks to human rights and national security but it never eventuated.

“Jiangsu Steamship is the only communication,” says second officer Singh. “According to them, the vessel has been registered to the Chinese port authorities and if we leave without their permission, the ship will be arrested.” The Age and the Sydney Morning Herald sought comment from Jiangsu Steamship and E-Commodities Holdings to ascertain the validity of this warning to the Anastasia crew.

A response has so far not been forthcoming. 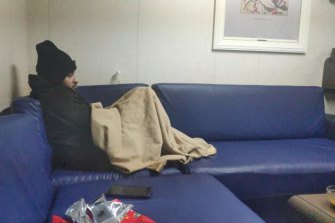 Crew members on the Jag Anand have not been able to get off the ship since January.

A similar game of chicken is being played further north in the port of Jintang. The Jag Anand bulk carrier has been anchored in Chinese waters since June, unable to dock and under orders to stay put. In its hull is coal loaded at Hay Point in Queensland, sourced from the Bowen basin at amine owned by Anglo American Australia.

According to a seafarer on board the Jag Anand who has asked to not be identified to protect his job, the crew of 23 Indian nationals are unravelling. None of the crew have been allowed off the ship since January, with two crew members stuck at sea for 18 months.

“One crew member’s father passed away three months ago … his mother is bedridden with cancer,” he tells The Age and the Sydney Morning Herald. “Another crew member has become a lunatic person… sleeps all day and stay awake all night, disturbing other crew members by making crazy noises, banging something on the floor, whistling.”

Chinese authorities say the Jag Anand is free to leave.

“China has never restricted it from leaving. The freight forwarder does not want to adjust the plans for the vessel due to commercial interests which is the real cause of the situation,” said Chinese Foreign Ministry spokesman Wang Wenbin in November. 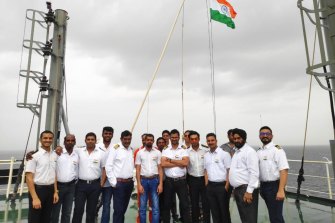 The mental health of crew aboard the Jag Anand is also severely tested.

The Jag Anand’s chain of command is also convoluted.

Dubai-owned Cargill was the original charterer of the Jag Anand but the vessel has been sublet to another charterer, Pacific Bulk.

A spokeswoman for Cargill says the company believes it still has a responsibility for the crew’s wellbeing. “This is an extremely complex issue and while as a charterer we do not manage crewing, we are continuously working hard with all stakeholders (shipowners, ports, cargo owners, amongst others) to find an immediate solution.”

Pacific Bulk Shipping is a chartering service tied to Norbulk Pacific Maritime, a shipping company based in the Phillipines. Calls placed to their office in Manila were met with a disconnection announcement. The Age and the Sydney Morning Herald. has sought comment from Norbulk Shipping in Glasgow.

Great Eastern Shipping, the company which owns the Jag Anand, says it has offered Pacific Bulk to send the ship and its crew to Japan at their own cost but were unsuccessful. “The situation on board is truly grim and extremely concerning. The crew on board are suffering from severe fatigue and stress” a spokesperson told the Hindu Business Line, adding the company is appealing to unions, consulates and the International Maritime Organisation for help.

But for family members of the crew, this is taking too long.

Shweta Bhosale is the wife of Virendrasinh Bhosale, an engineer aboard the Jag Anand. Living in the city of Pune, she is an anaesthesiologist working in the midst of the Covid-19 pandemic, worried she will contract the virus and be unable to care for the couple’s five-year old son. “My son always keeps asking about his dad,” she says. “It is becoming very difficult to console him.” 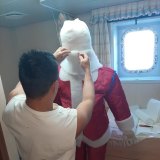 One crew member of the Anastasia consoling himself with a Santa he made from material found onboard.

Seafarers on the Jag Anand and Anastasia say they feel forgotten and abandoned. In his sleeping quarters in the metal flanks of the Anastasia, one crew member is learning how to play Hotel California and Bollywood tunes on his guitar to pass the time. In the corner there is a Santa Claus he has made out of foam and red material. “I am sad,” he tells The Age. “I’m worried for the older crew. They are suffering.”