Washington: In a new investigation, more than a dozen people say they suspect ''Godfather of Soul'' James Brown did not die of natural causes.

In a three-part investigation by CNN, published on Tuesday, Washington time, people who knew the late singer say they want a criminal probe into his death or would like the singer's body to be exhumed for an autopsy.

After Brown died in December 2006, aged 73, his official cause of death was listed as congestive heart failure, resulting from complications of pneumonia. 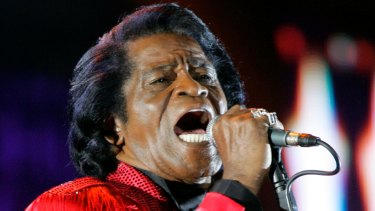 There have been calls for a criminal investigation into James Brown’s death.Credit:Matt Dunham

One of the nearly 140 people interviewed for the CNN piece was Marvin Crawford, the doctor who treated Brown at an Atlanta hospital prior to his death and the one who signed his death certificate. Crawford now says he too doubts Brown died of natural causes. Instead, he believes it was an overdose, accidental or otherwise.

"He was a patient I would never have predicted would have coded," referring to a medical slang term used to describe a patient in cardiopulmonary arrest. "But he died that night, and I did raise that question: What went wrong in that room?"

Another event that prompted suspicion was the seemingly ever-changing official story of Brown's death from his personal manager at the time, Charles Bobbit. Those interviewed by CNN said Bobbit's story "didn't make sense" and described it as "always a little vague".

Andre Moses White, a friend who helped Brown check into the hospital in December 2006, told the outlet that he was so convinced Brown's death wasn't what it appeared that he took a vial of the singer's blood from an IV tube shortly after Brown's death in the hope authorities could use it to investigate.

Brown's daughter, Yamma Brown, declined to provide the news outlet with a statement regarding why the family decided against having an autopsy performed at the time of her father's death.

The investigation also examines the death of Brown's third wife, Adrienne Brown, and delves into the legendary singer's past.

Although police found no foul play in Adrienne Brown's death in January 1996, her friend Jacque Hollander told CNN that she believes otherwise.

CNN obtained the pages of a confidential informant's notebook from Steve Miller, the retired detective who investigated Adrienne's death. In the 2001 notebook, the informant, who has since died, alleges that a doctor confessed to murdering Adrienne Brown, 45, with a fatal drug overdose. The doctor in question denied the allegations to CNN.

Hollander also alleges that she was raped by James Brown in 1988, which she says she told Adrienne about at the time. Brown was never prosecuted.

Police reports from the time of their marriage show Adrienne claimed her husband became violent with her around the same time. Brown was arrested after a neighbour confirmed to police that she saw the singer pull a trigger on Adrienne, the bullet of which hit her car tyre and trunk.

According to Hollander, Adrienne said the case against her husband had disappeared because she had been told to drop the charges or be killed.