Families and holidaymakers have been warned to prepare for heavy rain and gales this weekend, as forecasters say the unsettled weather shows no sign of abating.

The Met Office expects this week to remain ‘unsettled and changeable’, with low pressure coming in from the Atlantic set to leave this weekend wet and miserable.

Weather for the rest of the week is set to be very mixed, with a combination of showers and sunny spells breaking out across parts of the country.

But a yellow rain warning has been issued until Tuesday morning for an area in the north-west of the country that could see up to 40mm of rain, with the temperature across the country plunging, with lows of 6C (42F) in the south-west.

In better news there will be some sunshine on Tuesday, interspersed with heavy showers, with the rainfall retreating as the day progresses.

But Wednesday will be another wet and windy day for most, before a slightly drier Thursday. Then low pressure from the Atlantic will make Friday and the subsequent weekend wet and windy, with a possibility of more weather warnings. 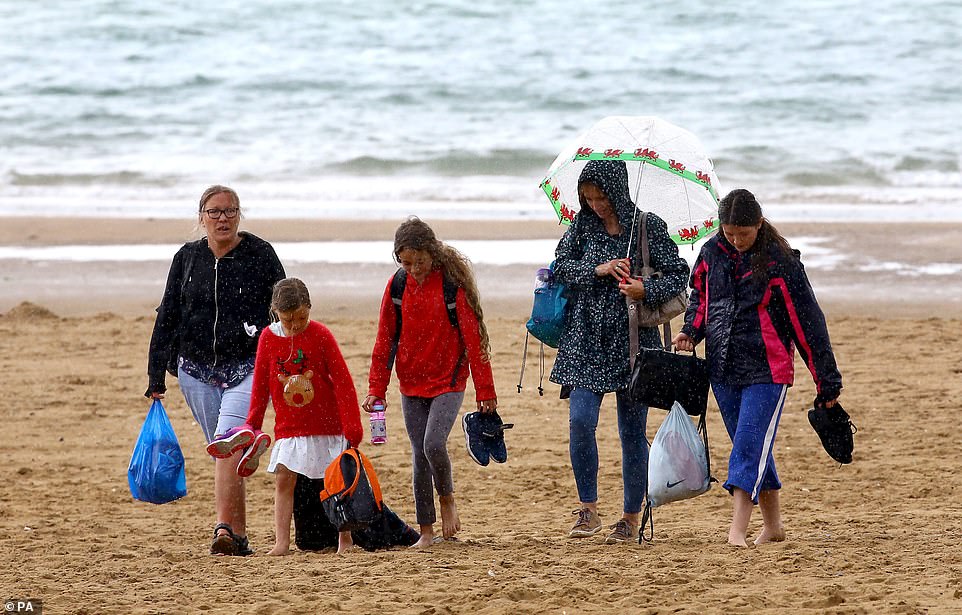 People on the beach today in Margate, Kent, during heavy rain as thunderstorms have been forecast across the South East 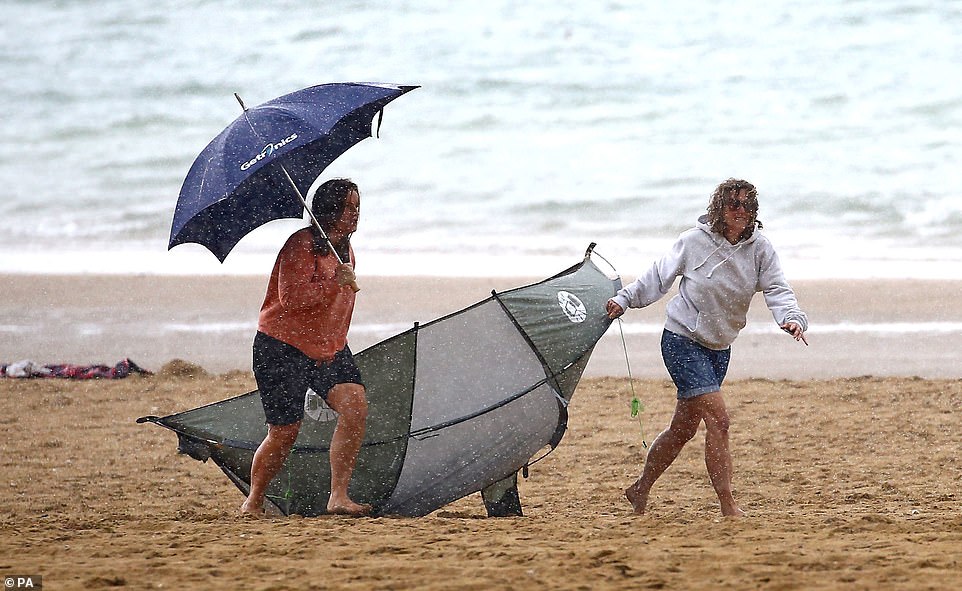 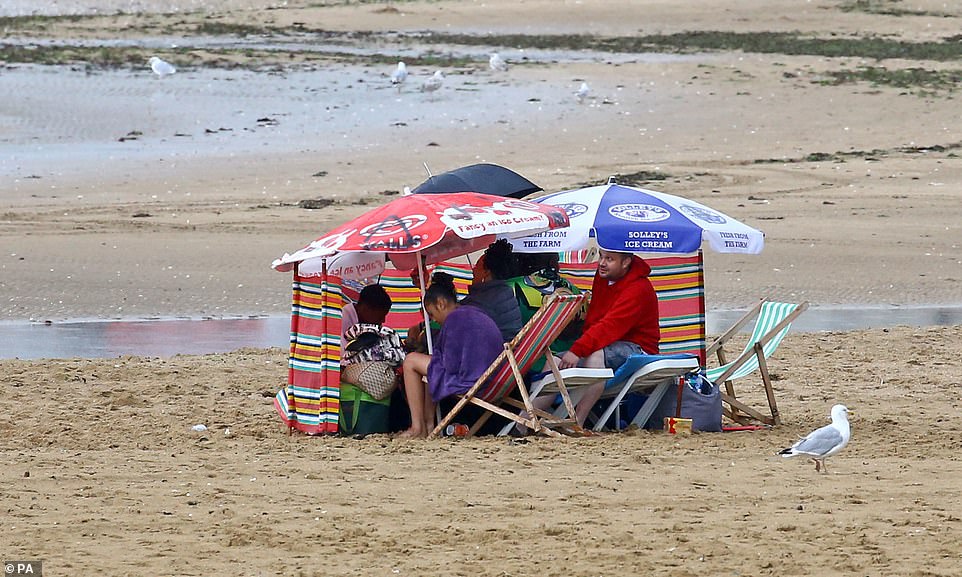 People shelter during heavy rain on the beach in Margate, Kent, today as thunderstorms are due across the South East 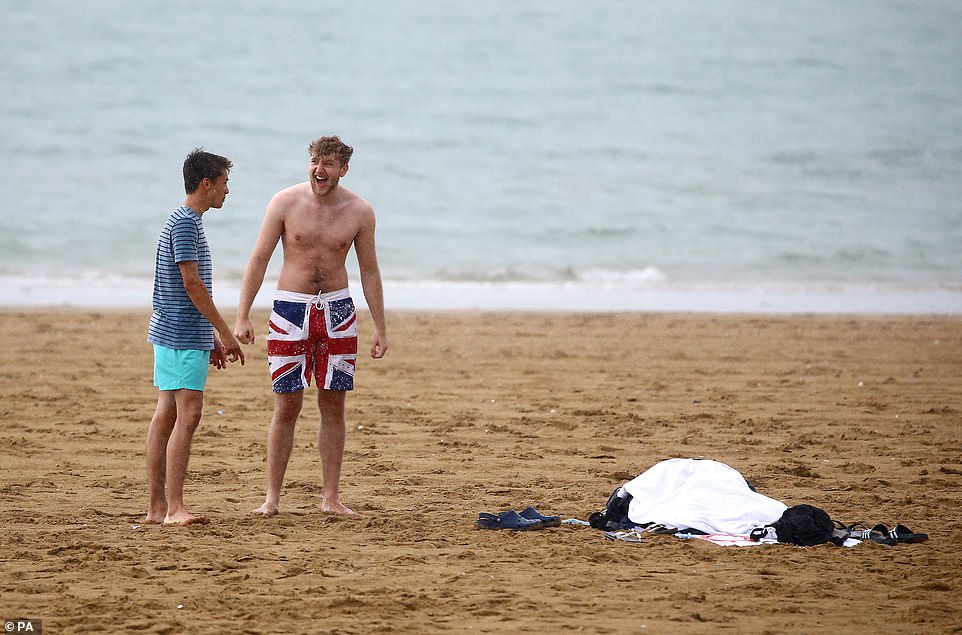 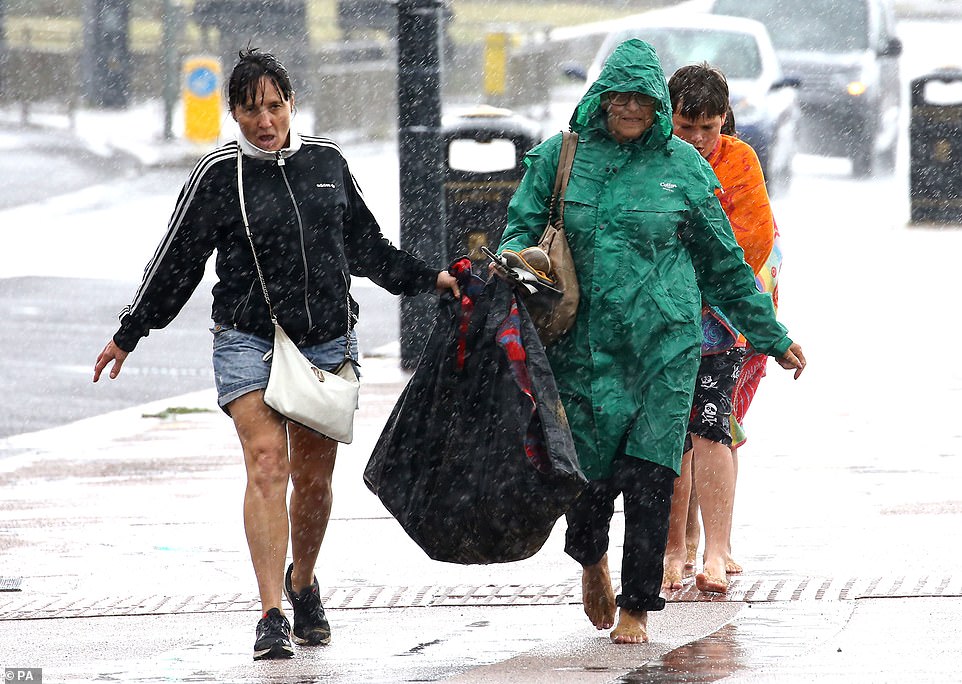 People leave the beach in Margate, Kent, today during heavy rain as thunderstorms are expected across the South East

Forecasters issued a thunderstorm warning for South East England earlier today, running from 10am to 7pm, amid an alert of 40mm (1.6in) to 60mm (2.4in) of rain in two to three hours, along with flooding, lightning and hail.

Some areas of northern England had a month’s worth of rain over the weekend, raising expectations that the country could see its wettest August on record as winds gusted at more than 60mph.

Cumbria’s Spadeadam saw 122mm (4.8in) fall over the weekend – just above the August average for the area of 116mm (4.6in). Further north, Auchincruive in South Ayrshire saw 63mm (2.5in) just yesterday. 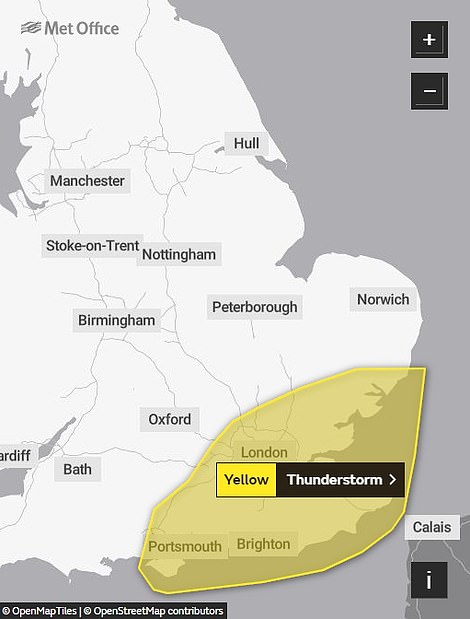 The previous UK high of rainfall in August was recorded in 1912 which saw an average of 167.6mm (6.6in) across the country. Another two weeks of downpours could now see the record breached.

Bookmaker Coral has cut the odds on this month being the wettest August on record from 4-5 to just 1-2. A spokesman said: ‘You’d be hard pushed to remember an week in August as wet as we have just had.’

Over the weekend in the South of England, areas were hit by heavy winds, causing disruption across the transport network caused by flooding and hazards blown on to roads and train tracks – usually fallen trees.

Ferry passengers heading to Dover were delayed outside port for up to five hours while tug boats tried to guide them to the dock. The top winds were at Mumbles Head in South Wales with 64mph on Saturday.

In Hampshire, A father and son had a miracle escape after a three tonne oak tree toppled onto their van.

David Crisp, a lift engineer, and his son Adam were driving along a country lane near Ringwood when the tree was blown over in the 60mph winds.

It smashed through the passenger side of the windscreen, where Adam, 26, had been sitting. Remarkably, he emerged from the wreckage with just cuts and bruises, while his father was unharmed.

David said he had been driving round a corner when he saw the oak beginning to fall. He slammed on the breaks but was unable to stop before the tree landed on top of his yellow Renault Trafic van. 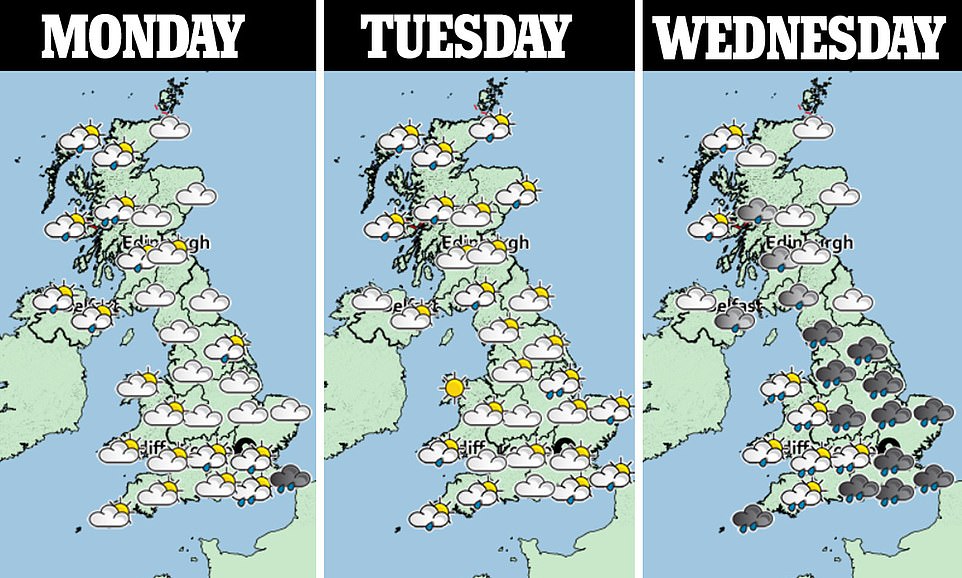 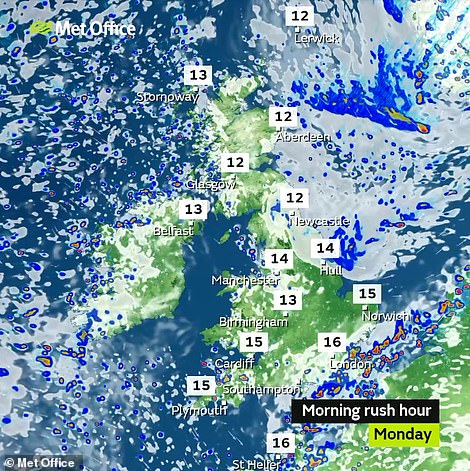 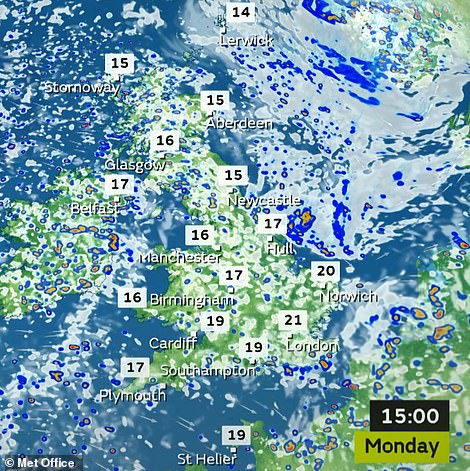 Parts of Britain will see showers during today, with temperatures only expected to get up to highs of 70F (21C) in the South 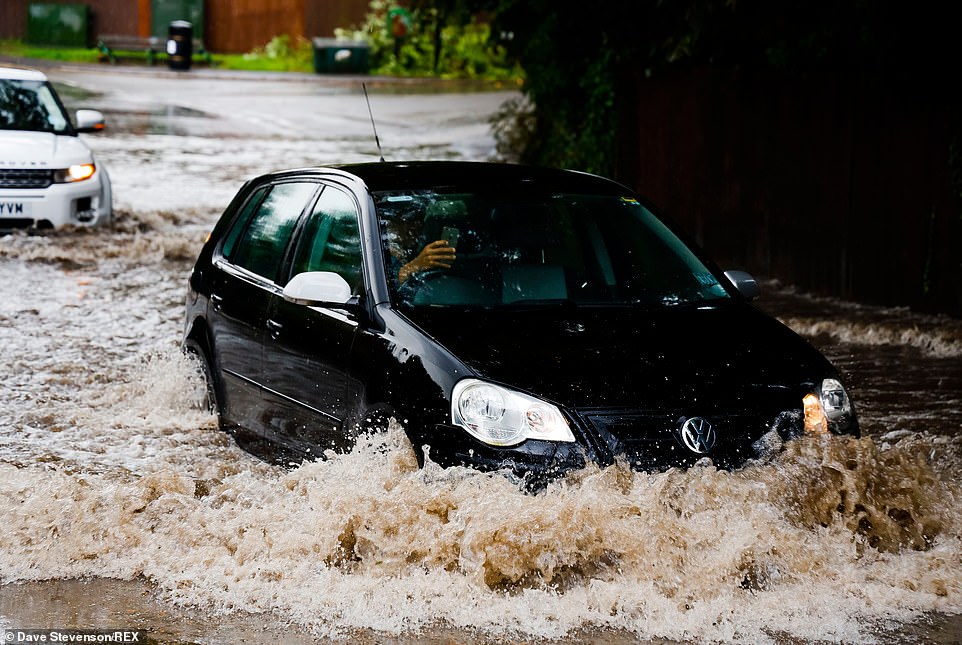 A motorist in a Volkswagen takes pictures as he drives through deep floodwater today at Kenley in Croydon, South London 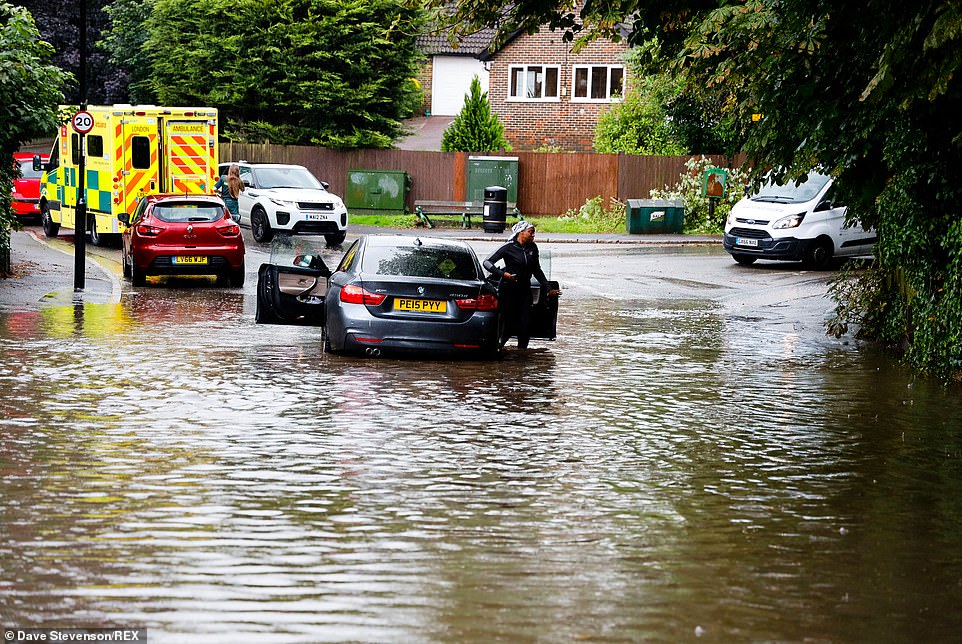 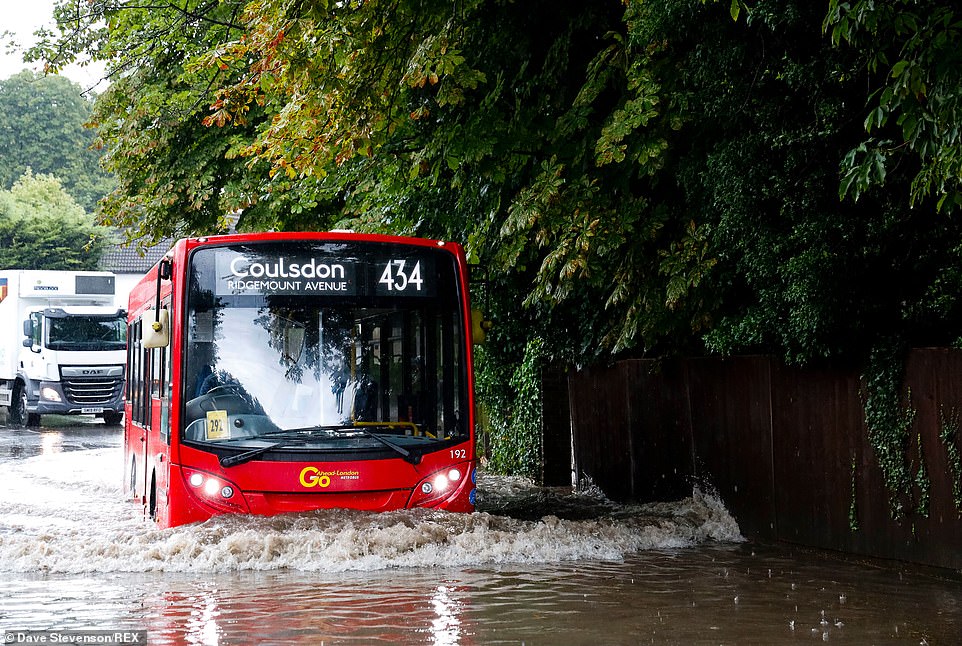 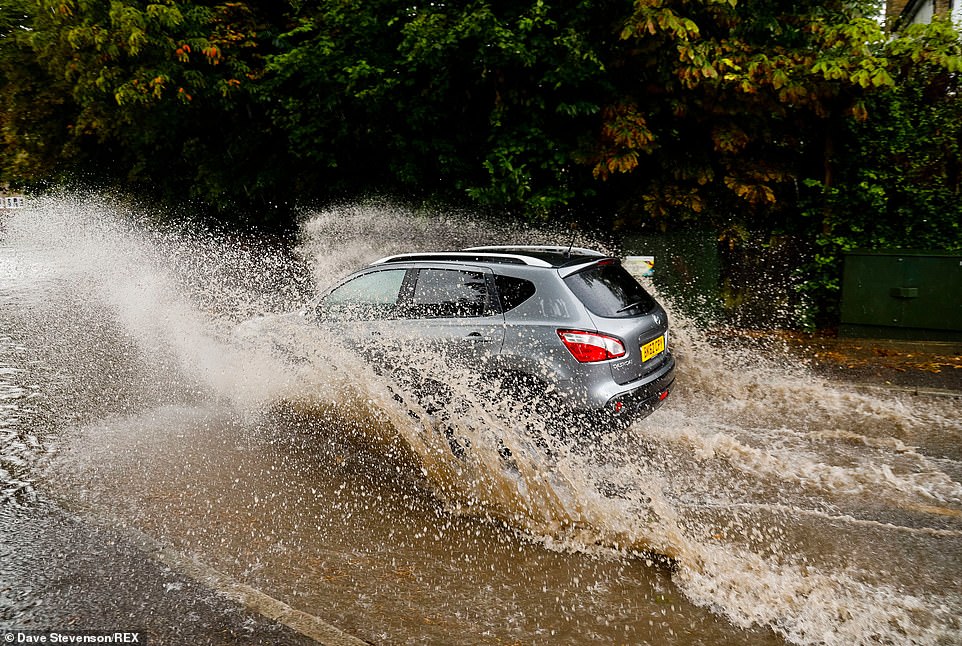 David said: ‘I was braking when we hit it. The most damage was caused to the passenger side, which is where my son was sitting. He’s got quite a few cuts and bruises on his arm. Luckily, it wasn’t anything more serious than that.

‘If you can walk away, that’s the most important thing. There were two choices – either I put my foot down, and it could have fallen on the middle of the van, or I tried to brake in time. I knew I was going to hit it anyway.’

Yesterday dawned brighter and quieter for most of the UK after wind speeds dropped, with a scattering of showers. Although many of the storms may have passed, the heat seen in July is now a distant memory.

Met Office meteorologist Helen Roberts said: ‘It does look like remaining unsettled and changeable right through most of the next seven days.’ 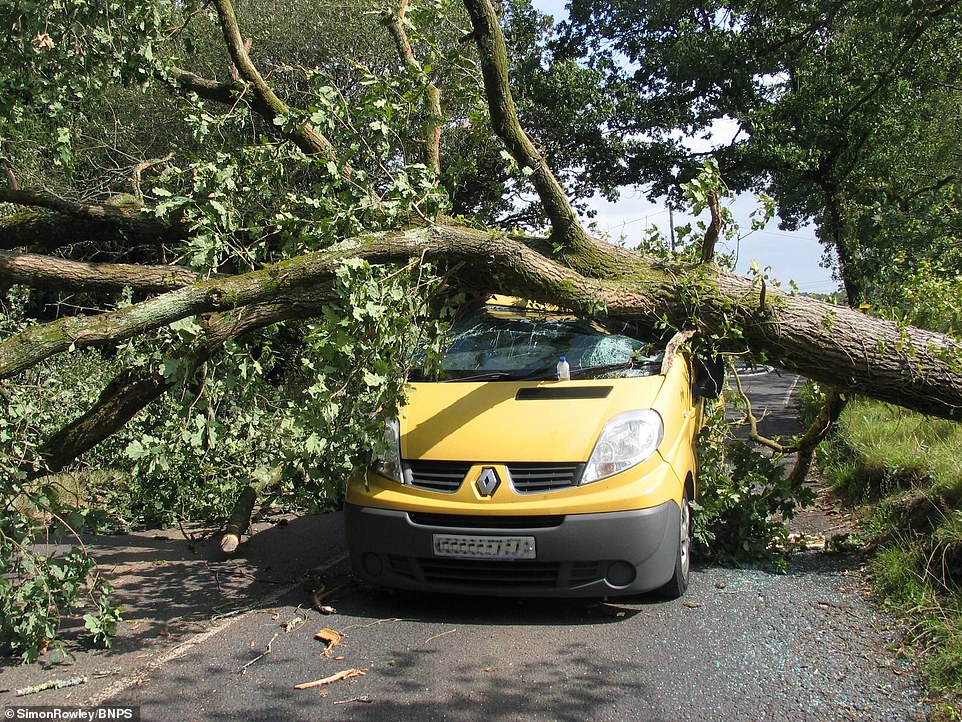 A father and son escaped after a three tonne oak tree toppled onto their van in 60mph winds in Ringwood, Hampshire 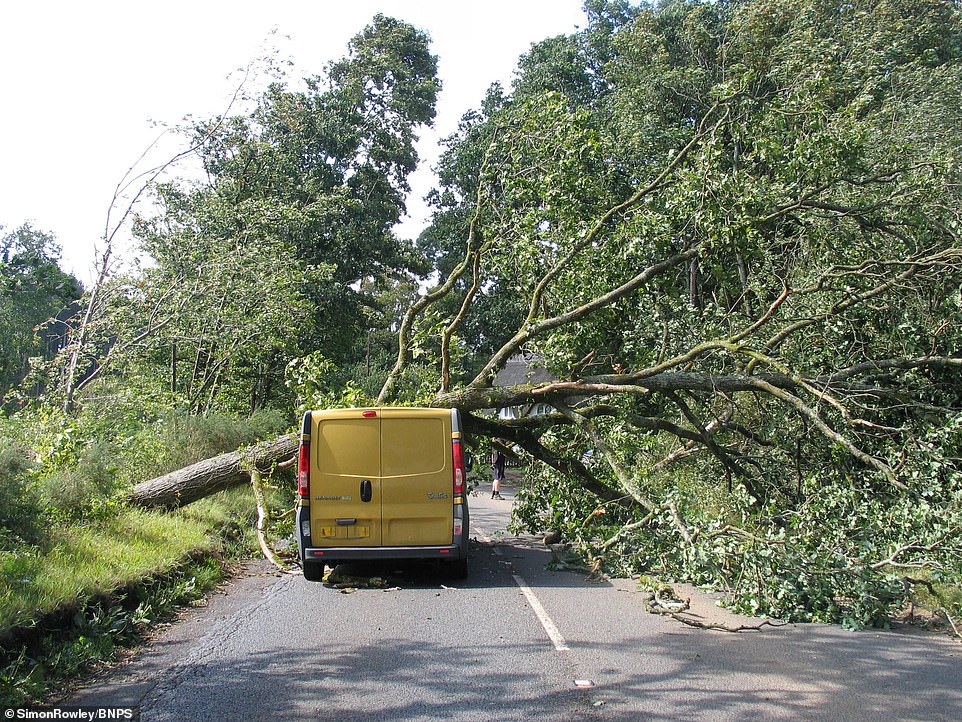 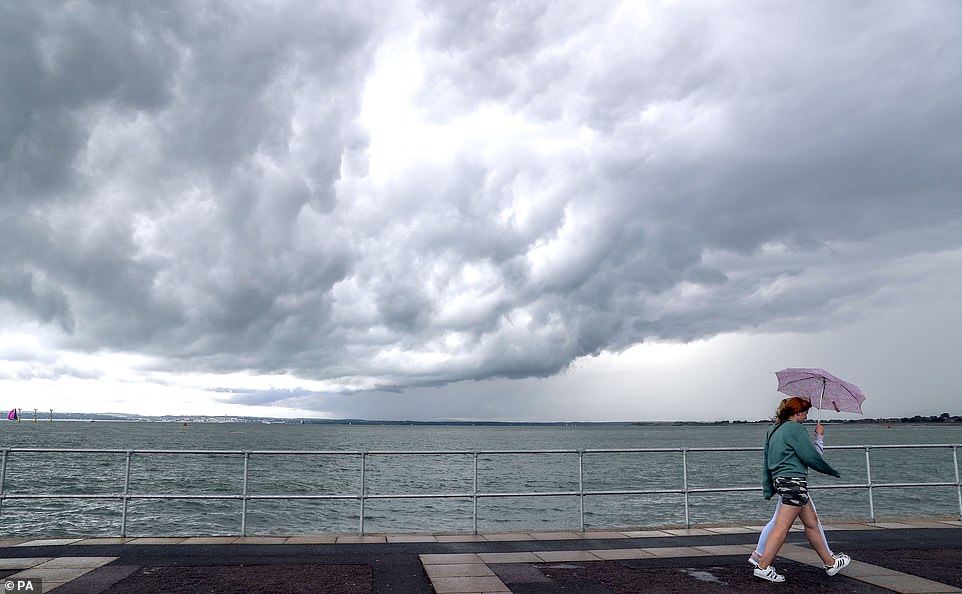 Rain clouds over the sea today in Southsea, Hampshire, as thunderstorms are due across the South East of England 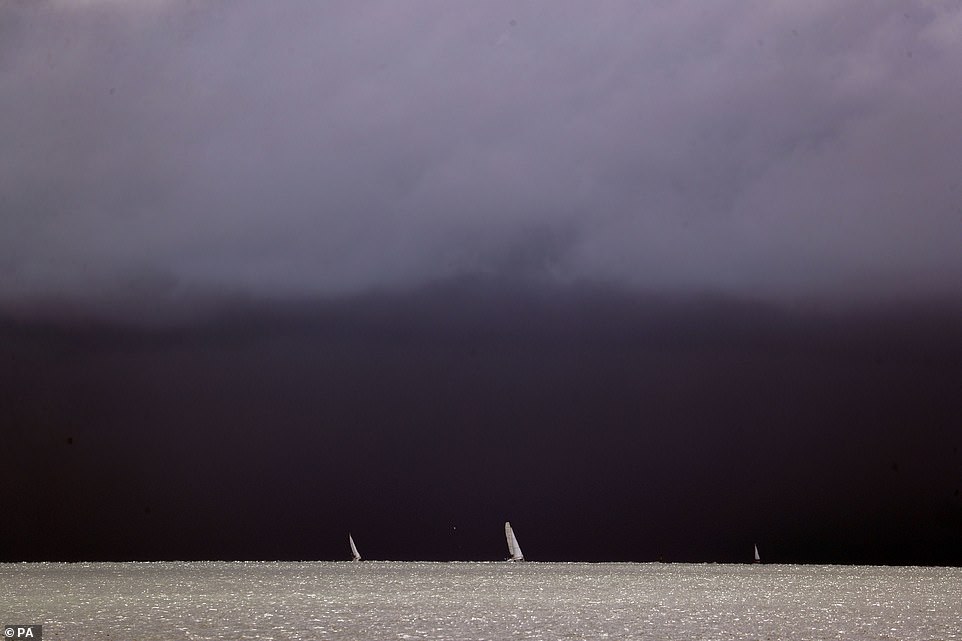 The Environment Agency has 27 flood alerts across England as well as two more serious warnings for Keswick and Cumbria in Carlisle, telling residents that ‘immediate action’ is required.

How does the Met Office name a storm in winter?

As the UK continues to be battered by showers today, we take a look at how the Met Office names storms and when they decided to.

It is aimed at helping the public keep themselves, their businesses and their properties safe.

This system is based on the impact the weather may have and how likely it is severe conditions may occur.

When the criteria is met for naming a storm either the Met Office or Met Éireann can name it.

More often than not the agencies will ask the general public to suggest names.

According to the Met Office a storm will be named when it has the potential to cause an amber ‘be prepared’ or red ‘take action’ warning.

This is while other weather types will also be considered, especially if rain could lead to flooding.

The Scottish Environment Protection Agency (Sepa) had ten flood alerts in place as homes were swamped and roads closed. East Ayrshire Council handed out 7,000 sandbags to worried residents across the region.

In Kilmarnock, Ayrshire, an Asda store was closed last night after the River Irvine burst its banks and the town’s Odeon cinema was evacuated. East Ayrshire Council set up a reception centre for residents affected by flooding.

The A77 was closed in both directions at Turnberry. In the Borders, traffic was halted on the A68 at Carter Bar. On Glasgow’s south side, Sepa issued a warning for the White Cart Water where it flows through Pollok Country Park.

Earlier, one west-bound lane of the M8 motorway in the city was closed by floodwater, resulting in congestion. Some trains between Glasgow Central and Rutherglen were cancelled or delayed after flooding on the line.

Elsewhere, the A92 – one of the main routes between Dundee and Angus – was partially shut after rain left a section of the road impassable. Downpours also brought misery to revellers who were attending outdoor events.

At the Party at the Palace in Linlithgow, West Lothian, police handed out ponchos to festival goers. On Saturday, hundreds of travellers found themselves trapped when flooding shut the west coast rail line for several hours.

Police posted pictures online of firefighters pumping water out of gardens in Castle Douglas, Kirkcudbrightshire, and diggers clearing a landslide, which closed the A7 south of Langholm, Dumfriesshire, on Saturday night.