Washington: President Donald Trump's demand for border wall funds has hurled the US federal government closer to a shutdown as a financial package approved by the House of Representatives on Thursday is almost certain to be rejected by the Senate. 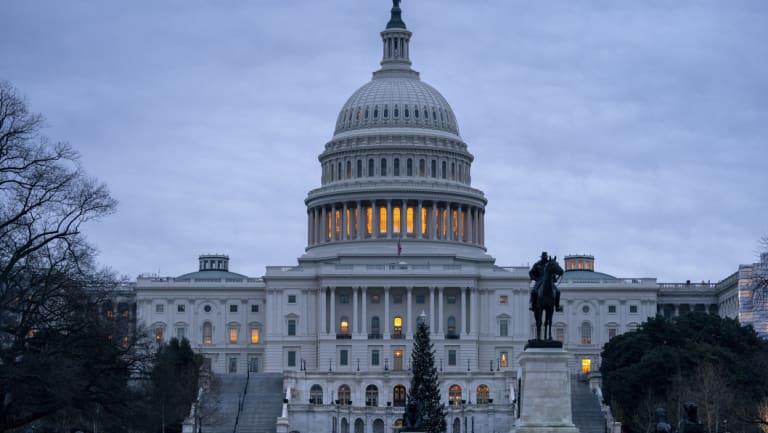 The Capitol is seen under early morning gray skies in Washington, on Thursday.Credit:AP

The White House said Trump would not travel to Florida on Friday for the Christmas holiday if the government was shutting down. More than 800,000 federal workers are facing forced leave or work without pay if a resolution is not reached before funding expires at midnight Friday (4pm Saturday AEDT).

The shutdown crisis could be one of the final acts of the House Republican majority before relinquishing control to Democrats in January. Congress had been on track to fund the government but lurched on Thursday when Trump, after a rare lashing from conservative supporters, declared he would not sign a bill without $5.7 billion funding he requested. Conservatives want to keep fighting for the money to pay for the wall. They warn that "caving" on Trump's repeated wall promises could hurt his 2020 re-election chances, and other Republicans' as well.

The House voted largely along party lines, 217-185, after GOP leaders framed the vote as a slap-back to Nancy Pelosi, who is poised to become House speaker on January 3 and who had warned Trump in a televised Oval Office meeting last week that he wouldn't have the votes for the wall.

"The President's been clear from the beginning. He wants something that gives border security, and he's not going to sign something that doesn't have that," White House Press Secretary Sarah Huckabee Sanders said before the voting. 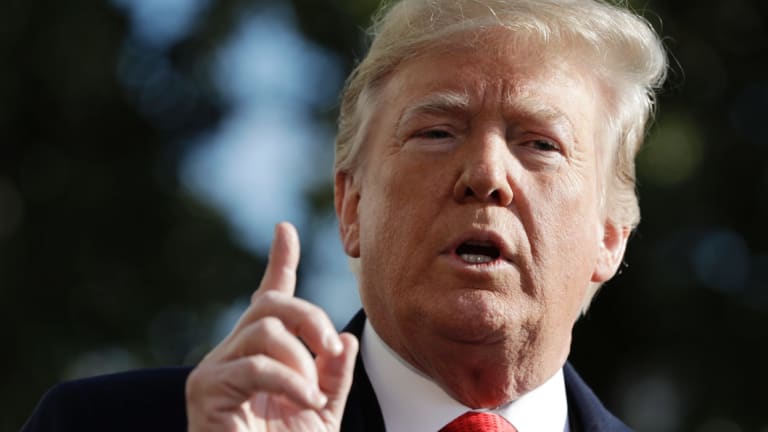 Trump's sudden rejection of the Senate-approved legislation, after days of mixed messages, sent Republican leaders scrambling for options back on Capitol Hill days before Christmas.

House Speaker Paul Ryan, exiting the hastily called meeting with Trump at the White House, said, "We're going to go back and work on adding border security to this, also keeping the government open, because we do want to see an agreement."

By afternoon, Trump shifted his terminology, saying he's not necessarily demanding a border wall but "steel slats" – which is similar to the border security fencing already provided for in the bill.

"We don't use the word 'wall' necessarily, but it has to be something special to do the job," Trump said at a farm bill signing at the White House. The nuance could provide Trump a way to try to proclaim victory. The bill would keep funding at current levels for border security, including pedestrian fencing and replacement fences, but not the wall. It requires previously used designs.

The measure, which includes a nearly $US8 billion disaster aid package many lawmakers want for coastal hurricanes and California wildfires, now goes to the Senate, where its prospects are grim amid strong opposition from Democrats. Sixty votes are needed to approve the bill there. 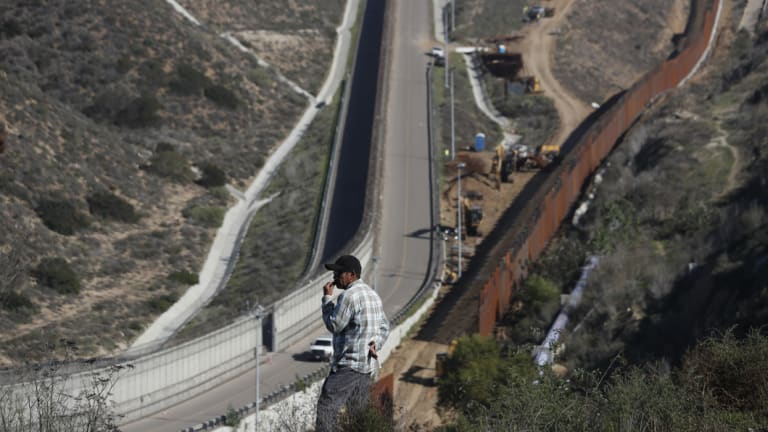 A man looks out at the US border where workers are replacing parts of the border fence with higher ones, in Tijuana, Mexico.Credit:AP

Senate Majority Leader Mitch McConnell warned senators they may need to return to Washington for a noontime vote on Friday.

Many senators already left town for the holidays after the Senate approved a bipartisan bill late on Wednesday to keep the government temporarily funded, with border security money at current $US1.3 billion level and no money for the wall. The House had been expected to vote on it Thursday.

The most likely possibility on Friday is that the Senate strips the border wall out of the bill but keeps the disaster funds and sends it back to the House. House lawmakers said they were being told to stay in town for more possible votes.

With Pelosi's backing, the Senate-passed bill likely has enough support for House approval with votes mostly from Democratic lawmakers, who are still the minority, and some Republicans.

Others were not so sure. "I don't see how we avoid a shutdown," said retiring Republican Dennis Ross.

Republican Mark Meadows,  the chairman of the conservative Freedom Caucus, said he was not convinced after a White House meeting with GOP leaders that Trump would sign the Senate bill.

"I looked him in the eyes today, and he was serious about not folding without a fight," Meadows said.

Democratic leaders have made clear they will not budge on their opposition to Trump's border that he campaigned on saying Mexico would pay for it. Mexico has refused.

"The Trump temper tantrum will shut down the government, but it will not get him his wall," said Senate Minority Leader Chuck Schumer. Democrats favour border security, Schumer said, but he denounced the wall as "ineffective, unnecessary and exorbitantly expensive."

Trump has bounced back and forth with mixed messages. Just last week he said he would be "proud" to shut down the government over it. Earlier this week he appeared to shelve his shutdown threats, with the White House saying he was open to reviewing whatever bill Congress could send him.

At issue in the current fight is money for nine of 15 cabinet-level departments and dozens of agencies, including the departments of Homeland Security, Transportation, Interior, Agriculture, State and Justice, as well as national parks and forests.

Many agencies, including the Pentagon and the departments of Veterans Affairs and Health and Human Services, are covered for the year and would continue to operate as usual if funding lapsed. The US Postal Service, busy delivering packages for the holiday season, would not be affected by any government shutdown because it's an independent agency.