West Australian Premier Mark McGowan will keep the state open to ‘low risk’ New South Wales, but has no qualms about putting up a hard border if the health advice recommends it.

Mr McGowan said he was concerned there would be many more COVID-19 cases to come in NSW, and the state was on the verge of a serious outbreak. 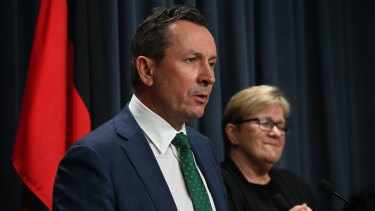 WA’s best defence was border controls, Mr McGowan said, but he would keep the control levels put in place on Thursday for the time being.

NSW is currently classified as a ‘low risk’ state. Arrivals to WA must self-quarantine for 14 days and get a COVID test on day 11. Anyone who arrived since December 11 must quarantine until they receive a negative COVID-19 test result.

Mr McGowan extended the 24-hour deadline for these people to be tested as lines outside COVID-19 clinics grew long on Friday.

Since the 3pm announcement on Thursday, 1936 people have been tested in WA, including 522 at the airport upon their arrival; a 172 per cent jump from the previous day.

Those people are now in self-quarantine awaiting their results.

“This has been a fast-evolving situation,” Mr McGowan said.

He said he understood the changes to border arrangements had thrown Christmas plans into disarray for many people.

“This is a deadly global pandemic, we cannot forget that,” he said.

There have been 87 people who have arrived in Perth from Sydney’s northern beaches area since the outbreak occurred.

There are 14 scheduled flights arriving from Sydney on Friday and Saturday with approximately 1500 passengers set to be on board.

“So they’re going to do their job, I’m going to do my job and together we’ll will continue to ensure that Australia has one of the best records in the world of both managing the impact of COVID-19 during this pandemic globally, as well as ensuring the economic comeback that has begun in Australia continues to move at pace,” he said.

“As we’ve often seen with these events, those limitations also can be eased once further information is known and that can be a matter for the premiers so they will follow the local health advice and make their decisions accordingly.”