It would be a “very, very big deal” if the Federal Court restrained a Sydney barrister from acting for federal Liberal minister Christian Porter in his defamation case against the ABC, and he will fight the move vigorously, the court has heard.

A friend of the woman who accused Mr Porter of raping her in the late 1980s, when all three were teenagers, filed an urgent application in court last week, seeking an order restraining defamation barrister Sue Chrysanthou SC from acting for Mr Porter against the ABC on the basis of an alleged conflict of interest. 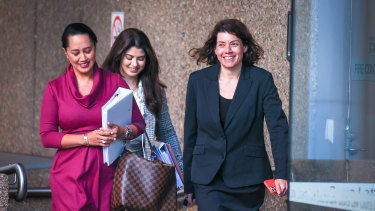 Jo Dyer, who was a high school debater with the woman and appeared on the ABC’s Four Corners program on November 9 to speak about Mr Porter, says Ms Chrysanthou previously acted for her in a separate matter involving an article The Australian newspaper published in the wake of the broadcast.

Ms Dyer’s lawyers say in court documents an order stopping Ms Chrysanthou from acting in the proceedings “is necessary to prevent prejudice to the proper administration of justice, and to preserve confidentiality and legal professional privilege”.

Sydney barrister Christopher Withers SC, who is acting for Mr Porter, said at a preliminary hearing on Wednesday it will be a “very, very big deal if Mr Porter loses his counsel in this case” and it will be “vigorously” defended. The legal fight over Ms Chrysanthou will be heard over three days from Monday.

Justice Tom Thawley said: “It’s a little bit odd, isn’t it, for a barrister to give a client advice and not be retained?”

“No,” Mr Withers said. “You can have a situation where you … function as a sounding board. That falls short of an actual retainer to act.”

Ms Chrysanthou has said, via her lawyers, that she does not recall what Ms Dyer disclosed to her in a conference on November 20. The court heard on Wednesday that a former boyfriend of the woman who made the rape allegation, Macquarie banker James Hooke, was also present at the conference along with two other lawyers.

Mr Withers says questions will arise about whether the information Ms Dyer disclosed to Ms Chrysanthou was confidential at the time or has remained confidential in light of public statements made by Ms Dyer about Mr Porter.

“The applicant is a prolific public commentator about this case,” Mr Withers said.

He said solicitor Rebekah Giles, who is also acting for Mr Porter, had trawled through Ms Dyer’s “numerous” public statements and had set them out in an affidavit filed in court.

But Michael Hodge QC, for Ms Dyer, said “on any view the public disclosures or the public statements that have been referred to by Ms Giles in her affidavit do not cover the entirety of the information that was disclosed in conference to Ms Chrysanthou”.

Mr Porter’s legal team sought discovery – a legal process where parties to litigation hand over relevant material to the other side – of a potentially vast number of communications from Ms Dyer including any comments about Mr Porter in closed Facebook groups. Mr Withers said such groups were in “the public domain”.

Mr Hodge said the discovery categories were too broad.

Justice Thawley did not comment on whether a closed Facebook group was in the public domain but ordered discovery of a variety of communications, excluding comments by Ms Dyer that were made in a manner that “expressly or implicitly” required them to be kept confidential.

Mr Porter, the Minister for Industry, Science and Technology, is suing the ABC and journalist Louise Milligan over a February 26 online article about a rape allegation against a cabinet minister. Mr Porter was not named, but he alleges he was identifiable.

Mr Porter claims the article suggested he “brutally raped a 16-year-old girl in 1988”, when he was 17, and this contributed to her taking her own life last year, after she told NSW Police she did not wish to pursue her complaint. Mr Porter strenuously denies the claims.

The parties return to court on Monday.