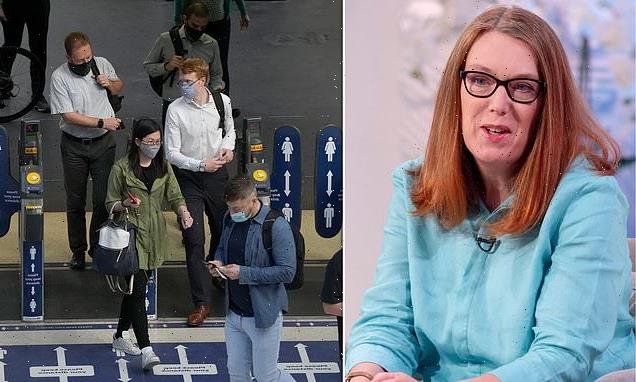 Vaccines AND masks are best way to protect ourselves after Freedom Day, says scientist behind Oxford University’s Covid vaccine 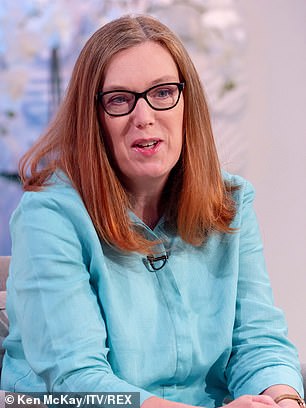 Professor Dame Sarah Gilbert, who helped develop the AstraZeneca jab, said wearing a face covering to protect other people in indoor settings is ‘a sign of respect’

Vaccines and masks are the best way to protect ourselves after ‘Freedom Day’ on Monday, one of the scientists behind the Oxford University Covid vaccine claimed today.

Professor Dame Sarah Gilbert, one of the brains behind the AstraZeneca jab, said wearing a covering in crowded indoor settings was ‘a sign of respect’.

She admitted masks do little to protect the wearer, but claimed they may prevent some people from passing the virus onto others.

Dame Sarah said she will follow Professor Chris Whitty’s advice to continue to wear masks when they are no longer a legal requirement next week.

Her comments come amid fears that mask-wearing etiquette could spark a culture war post ‘Freedom Day’ on Monday.

Ministers and scientific advisers are still encouraging people to don a mask in crowded spaces where the risk of Covid is higher – such as on trains or busy shops.

Adding to confusion, London Mayor Sadiq Khan this morning revealed that face coverings will still be compulsory on the Tube, buses and taxis in the capital.

Dame Sarah told Good Morning Britain: ‘None of the protective measures are completely effective on their own and we get the best protection when we link up different ways of protecting ourselves.

‘So if we get everybody who is eligible for the vaccine to have the vaccine, if we wear a facemask indoors in crowded areas. 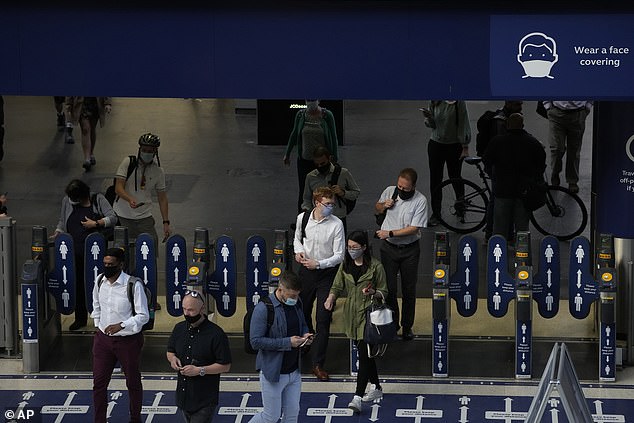 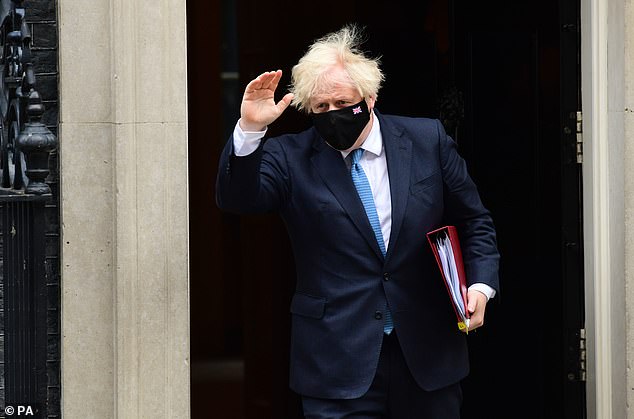 Boris Johnson (pictured today) called for continued mask-wearing in busy indoor settings such as trains, supermarkets and cinemas despite the mandate being lifted on Monday 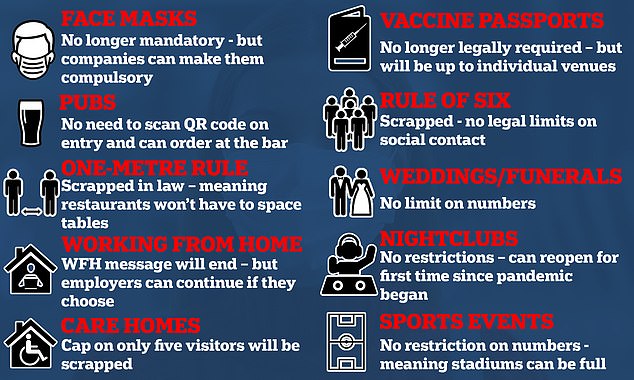 The coronavirus restrictions which will be removed from July 19

Masks ‘probably won’t do any good’ from July 19 because not enough people will wear them, top SAGE expert claims

Wearing a mask after Freedom Day ‘probably won’t do any good’, one of the Government’s top scientific advisers claimed today.

Professor Graham Medley accepted there was still a lack of evidence about how useful masks are but said is was his personal belief they only work when ‘everybody’ wears one.

From July 19, people in England will no longer be legally required to wear a face covering on public transport or in shops, restaurants and other indoor spaces.

But ministers and scientific advisers are still encouraging people to don a mask in crowded spaces where the risk of Covid is higher.

‘But on the other hand, if it’s not mandated it probably won’t do any good.’

Professor Medley is the chairman of SAGE’s modelling group SPI-B, whose forecasts pointed towards a smaller wave this autumn and gave ministers the confidence to press ahead with the final unlocking.

He added: ‘I personally will wear a mask to protect other people. I think it’s quite a reasonable thing to do.

It doesn’t have a huge imposition in terms of economic impact or in terms of freedom, and I think there is evidence to suggest it does good, but only if everybody does it.’

‘So I think that, without the mandation, then we end up with a situation where even if the majority of people, let’s say 70 per cent of people wear a mask, will that actually do any good because of the 30 per cent who don’t? I think that is something which still needs to be determined and discussed.’

There is enough evidence to show masks offer at least some protection against catching and spreading Covid but the extend of this protection is still unknown.

‘And I think it’s a sign of respect, if you’re in a situation where you might be able to transmit the virus to somebody else, to keep the mask on.

Professor Catherine Green, who was also part of the team that developed the vaccine, said: ‘The vaccine is a seatbelt, it’s keeping everybody around us safe.

‘There’s no reason not to wear a mask too — sometimes two safety measures are better than one, and not everybody can take the vaccine.’

The experts backing of masks come as Mr Khan broke ranks by announcing he wanted to keep masks compulsory on public transport in London despite the the end of legal restrictions across England from Monday.

The Transport Secretary Grant Shapps played down the tensions this morning saying he had ‘expected’ operators to put in place ‘conditions of carriage’ to ensure that passengers were safe on public transport.

Passengers on trains in and out of London terminals will not need to wear masks during their journeys but must while travelling around the city in the increasingly confused situation.

Unions have warned that the ‘botched’ approach to setting the rules will leave railway workers facing the threat of violence from angry customers.

Mr Khan told BBC Breakfast that around 400 enforcement officers would be deployed to check people are still wearing masks in the capital.

‘It’s not perfect. [It] would have been better if national rules applied across the country to avoid any confusion,’ he said.

‘The government for their own reasons have decided not to do that.’

Asked about the lack of restrictions on services from outside the city, Mr Khan said: ‘A number of services that come into London are not my responsibility.

‘If you are in London, you need to follow the rules.’

SAGE adviser Professor Graham Medley, chairman of the modelling group Spi-B, yesterday said he would continue to wear a covering next week — but warned it ‘probably won’t do any good’ unless people are forced to.

There is enough evidence to show masks offer at least some protection against catching and spreading Covid but the extend of this protection is still unknown.

Speaking about the move to drop masks from next week, Professor Medley yesterday backed the idea of keeping masks mandatory.

He told the BBC Radio 4 Today Programme: ‘I understand the Government’s reluctance to actually mandate it.

‘But on the other hand, if it’s not mandated it probably won’t do any good.’

He added: ‘I personally will wear a mask to protect other people. I think it’s quite a reasonable thing to do.

It doesn’t have a huge imposition in terms of economic impact or in terms of freedom, and I think there is evidence to suggest it does good, but only if everybody does it.’

‘So I think that, without the mandation, then we end up with a situation where even if the majority of people, let’s say 70 per cent of people wear a mask, will that actually do any good because of the 30 per cent who don’t?

‘I think that is something which still needs to be determined and discussed.’

WHAT HAVE STUDIES SHOWN ABOUT FACE MASKS AND COVID?

Research on how well various types of masks and face coverings protect against coronavirus has varied but experts and politicians have generally leaned towards the idea that the chance of some protection is better than none.

In the UK, face coverings were first made mandatory in for public transport in June and later for shops and other indoor spaces in July.

Here’s what studies have shown so far about whether masks work:

Researchers at Boston University in the US found wearing face masks is an effective way to stop the spread of the coronavirus.

The study, published in the journal Lancet Digital Health, found a 10 per cent rise in self-reported mask wearing is associated with a three-fold increase in the odds of keeping the R number – the number of others each person with coronavirus infects – below 1.

Co-author of the study Ben Rader, of Boston Children’s Hospital and Boston University, said: ‘An important finding of this research is that mask wearing is not a replacement for physical distancing.’

Scientists at New Mexico State University in the US found wearing a cloth mask may not shield the user totally from coronavirus because infected droplets can slip through, but it would significantly reduce how many.

‘Wearing a mask will offer substantial, but not complete, protection to a susceptible person,’ said Dr Krishna Kota, an associate professor at the university who led the research.

The study found while all masks blocked at least 95 per cent of droplets from coughs and sneezes – there was still a risk of the disease being passed on.

A MASK ‘WILL ALWAYS BE BETTER THAN NOTHING’ (DECEMBER 2020)

Research by the University of Massachusetts Lowell and California Baptist University in the US found wearing a used three-layer surgical mask can reduce the number of small droplets that are released into the air by two thirds.

Co-author Dr Jinxiang Xi said: ‘It is natural to think that wearing a mask, no matter new or old, should always be better than nothing.

‘Our results show that this belief is only true for particles larger than five micrometers, but not for fine particles smaller than 2.5 micrometers.’

A study by Copenhagen University Hospital in Denmark suggested face masks may only offer the wearer limited protection against Covid infection.

Researchers found there was no statistically significant difference in the number of people who contacted the virus in a group wearing masks in public compared to a group that did not do so.

The study was carried out in April and May when Danish authorities did not recommend wearing face coverings.

Research by Edinburgh University in Scotland suggested cloth face masks are effective at reducing the amount of droplets spread by coughing or sneezing.

The findings suggest a person standing two metres from someone coughing without a mask is exposed to 10,000 times more droplets than from someone standing half a metre away wearing a basic single layer mask.

Professor Paul Digard, of the University of Edinburgh’s Roslin Institute, said: ‘The simple message from our research is that face masks work.

‘Wearing a face covering will reduce the probability that someone unknowingly infected with the virus will pass it on.’

A study by Duke University in North Carolina, US, found N95 masks are the most effective masks at reducing the spread of Covid-19.

The research published in the journal Science Advances, studied 14 types of face coverings.

Co-author Dr Eric Westman said: ‘If everyone wore a mask, we could stop up to 99 percent of these droplets before they reach someone else.

‘In the absence of a vaccine or antiviral medicine, it’s the one proven way to protect others as well as yourself.’

A University of Oxford study published on March 30 last year concluded that surgical face masks are just as effective at preventing respiratory infections as N95 respirators for doctors, nurses and other health care workers.

N95 respirators are made of thick, tightly woven and moulded material that fits tightly over the face and can stop 95 percent of all airborne particles, while surgical masks are thinner, fit more loosely, and more porous.

The Oxford analysis of past studies – which has not yet been peer reviewed – found that surgical masks were worth wearing but any face mask is only as good as other health and hygiene practices.