Washington, DC: US Secretary of State Antony Blinken has met his Russian counterpart, Sergei Lavrov, on the sidelines of an Arctic Council summit in Iceland, telling him the US is seeking “a more stable and predictable relationship with Moscow”.

But, according to a department account of the session released on Wednesday, Blinken underscored President Joe Biden’s “resolve to protect US citizens and act firmly in defence of US interests in response to actions by Russia that harm us or our allies”. 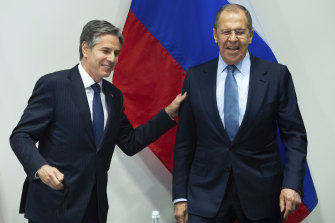 He also brought up “Russia’s continued military deployments in and near Ukraine”, as well as the wellbeing of the dissident Alexei Navalny, and asked for the release of two Americans held by Russia – Paul Whelan and Trevor Reed.

Blinken discussed Russia’s activities in the Syrian civil war and “underscored the imperative of ensuring humanitarian access for the people of Syria”, the State Department said.

It’s “no secret that we have our differences”, Blinken said in Reykjavik after bumping elbows with Lavrov on Wednesday evening before the meeting began. It was their first in-person encounter since Biden took office in January.

Another issue involves a date and location for a summit between Biden and Russian President Vladimir Putin, expected to take place in Europe in the coming months. That was not addressed in the State Department account.

“It seems we had constructive talks,” Lavrov said after the meeting with Blinken, according to the Ministry of Foreign Affairs website.

He added that there was a need to get beyond the “unhealthy situation which occurred in relations between Moscow and Washington in the previous years”. He declined to comment on a possible Biden-Putin meeting, according to an Interfax report.

Lavrov said before the meeting that there were “serious differences” in how the US and Russia viewed major issues in the world, but added that “our task is to make the best of the diplomatic opportunities that we have”.

According to the US account, Blinken suggested “enhanced co-operation” involving Afghanistan, as well as curbing the nuclear programs of Iran and North Korea.

US-Russian relations remain tense, and fears of war with Ukraine rose last month when Putin sent tens of thousands of troops along the border between the two nations, seven years after he annexed Crimea. But Russia then announced a pullback, and Biden discussed the potential summit with Putin.

The Reykjavik meeting came hours after the Biden administration submitted a report to Congress saying it would hold off on punishing the Swiss-based company overseeing construction of the Nord Stream 2 pipeline from Russia to Germany. That move was seen as a significant concession to Russia, even as the US said doing so would create more unity among allies to put pressure on Putin.

The Arctic Council is made up of nations around or near the Arctic Circle, including Russia and the US. Iceland has had the organisation’s chairmanship. Russia will have that role for the next two years.

The State Department said Blinken and Lavrov “discussed Russia’s Arctic Council chairmanship and the importance of co-operation given our shared stake in the region”.