"UP to 16" people have been gunned down outside a Chicago funeral home "in ambush" after a service for a murder victim as violence explodes.

The Fire Department told CBS2 that one woman was shot multiple times on Tuesday night and the victims range from serious to critical condition. 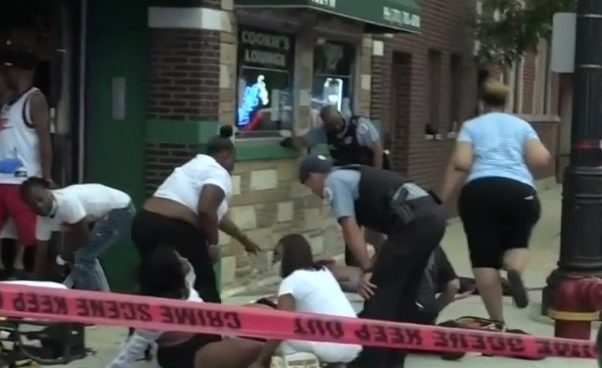 The outlet reported that there was a planned ambush taking place outside of the home after a memorial service was held for a murder victim.

At least 11 people were rushed to hospital, with some in ambulances and others self transporting.

Witneses told CBS that they were inside of the funeral home when the shots were fired.

When questioned about reports to send the additional officers into the area, Trump replied: "Well, it depends on what your definition of 'troops' is. I mean, we're sending law enforcement."

Before confirming reports, the president made it clear that he would be taking action against several cities that have seen ongoing protests.

Speaking from the White House on Monday, Trump said: "We're not going to let New York and Chicago and Philadelphia, Detroit and Baltimore and all of these, Oakland is a mess.

"We're not going to let this happen in our country. All run by liberal Democrats."

Honing in on the violence in Chicago, Trump said with the number of shootings over the weekend – 63 – the city is "worse than Afghanistan."

The law enforcement officers will focus on illegal gun sales and gun violence among other targets, CNN reported.

Earlier on Monday, Chicago's Mayor Lori Lightfoot voiced her concerns with sending in the troops.

She said: "We don't need federal agents without any insignia taking people off the streets and holding them, I think, unlawfully. That's not what we need."

"We regularly work alongside our local and federal law enforcement agency partners toward the common goal of keeping Chicago residents safe.

"If federal agents are deployed, it is critical that they coordinate with the Chicago Police Department and work alongside us to fight violent crime in Chicago."