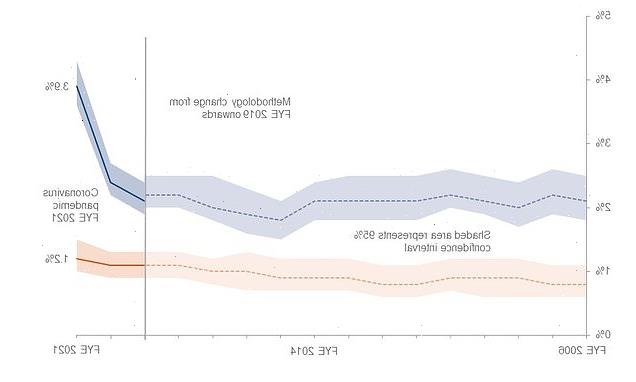 Universal credit benefit fraud and error reaches record high with £8.4billion lost in a year – as number of claimants doubles to six million during pandemic

Universal credit benefit fraud and error has nearly doubled in a year during the pandemic to hit a record high – with £8.4billion lost in just 12 months, Government data revealed today.

Officials said the shockingly high figure, up from £4.6billion the previous year, was almost entirely down to fraud – with the number of people on universal credit also doubling to six million since the Covid-19 crisis began.

The increase in fraud has been put down to more Britons applying for the benefit and the value of each case going up – rather than a higher proportion of people carrying out the crime, the Department for Work and Pensions said.

Overall fraud and error across the benefits system went up by nearly two-thirds in a year to 3.9 per cent in 2020/21, while the rate on universal credit went up by more than a half to 14.5 per cent.

Many cases involve people claiming too much money, such as by withholding some income details – while others see criminal gangs stealing people’s details to apply for advance payments before the real person gets the bill. 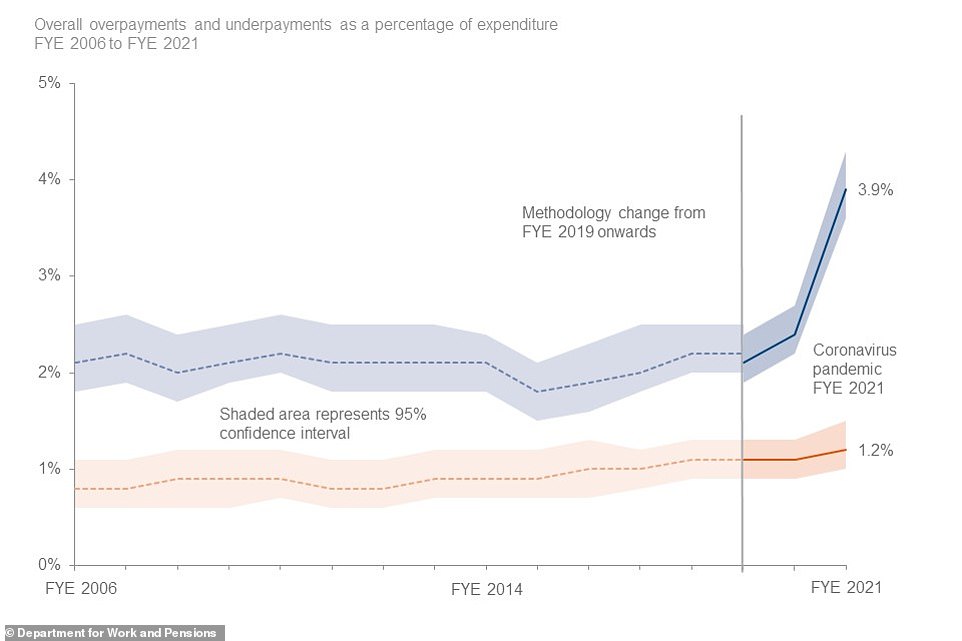 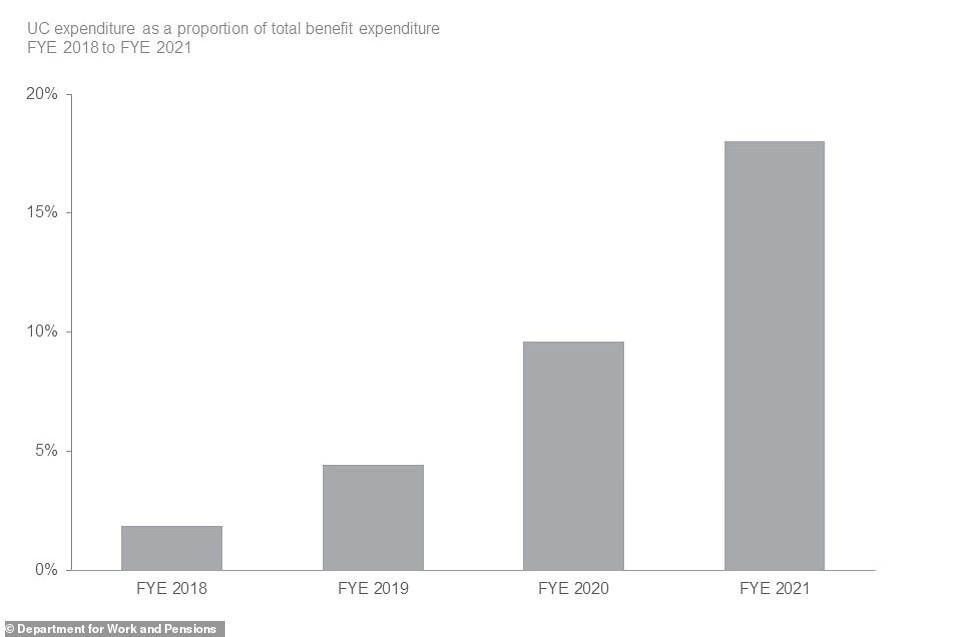 The proportion of total benefit expenditure that relates to universal credit has almost doubled, as the above graph shows 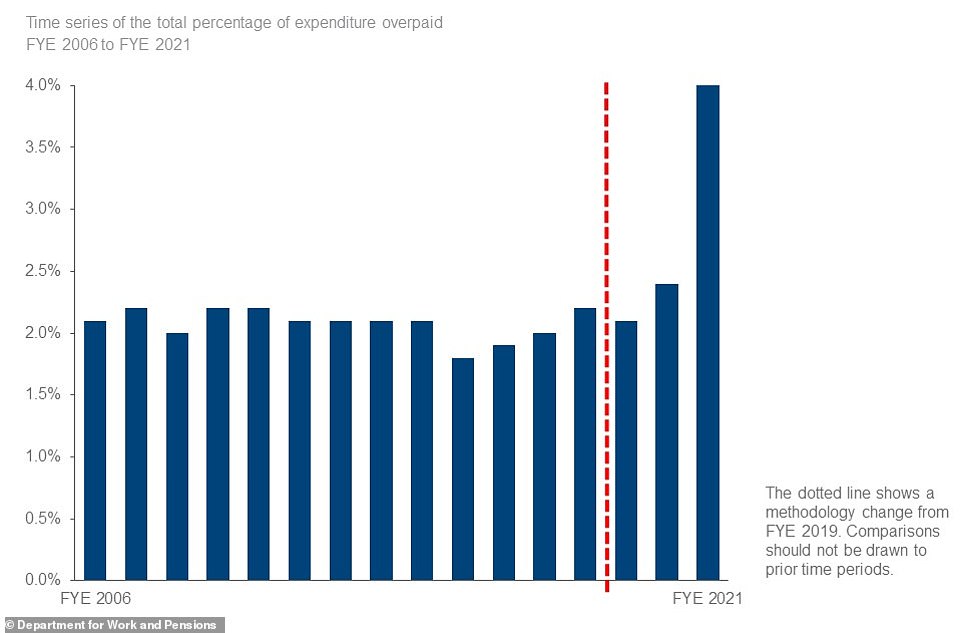 Problems were exacerbated after the Government relaxed some welfare rules amid a surge in demand for universal credit in March and April last year when the pandemic first took hold in Britain, reported BBC News.

Criminal gangs started targeting the benefit and managed to steal up to £1.5billion after identity checks were processed online rather than in person, and some information was not checked such as the cost of rent.

Another issue was many new claimants last year applying for both universal credit and the Self Employment Income Support Scheme – with income from the latter meaning people should receive less universal credit.

It comes as benefit chiefs are set to recheck one million universal credit cases for possible fraud, with one DWP director saying thousands of people face getting a ‘tap on the shoulder’ following the rise in fraud and error. 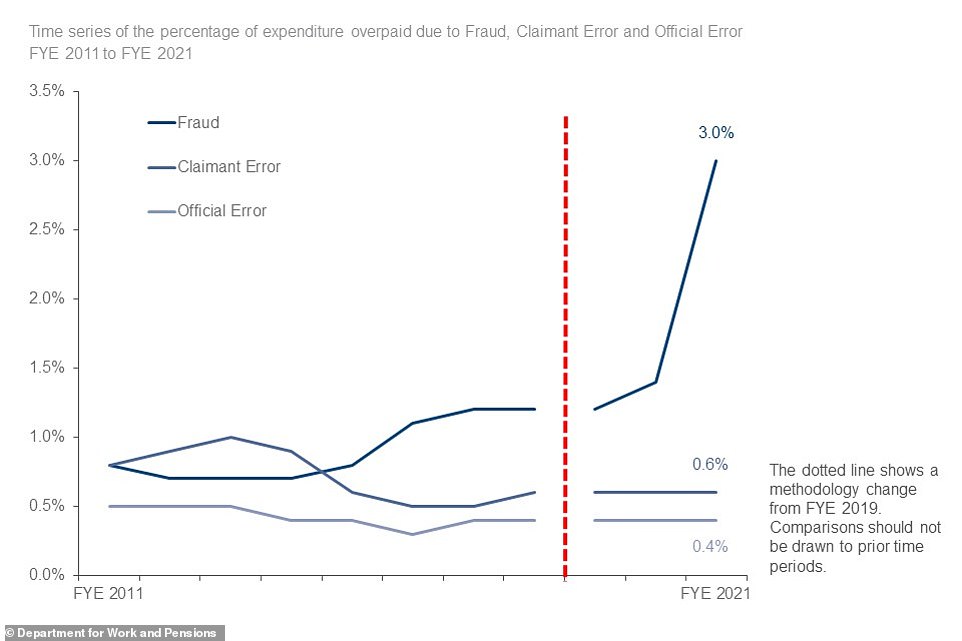 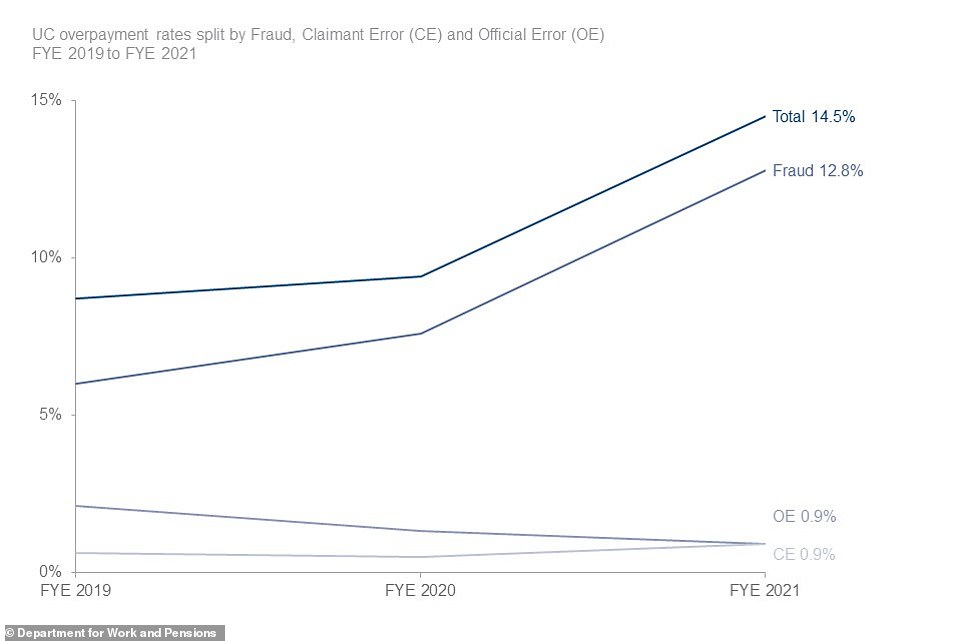 The increase in the universal credit overpayment rates has been driven by an increase of 5.2 percentage points in fraud 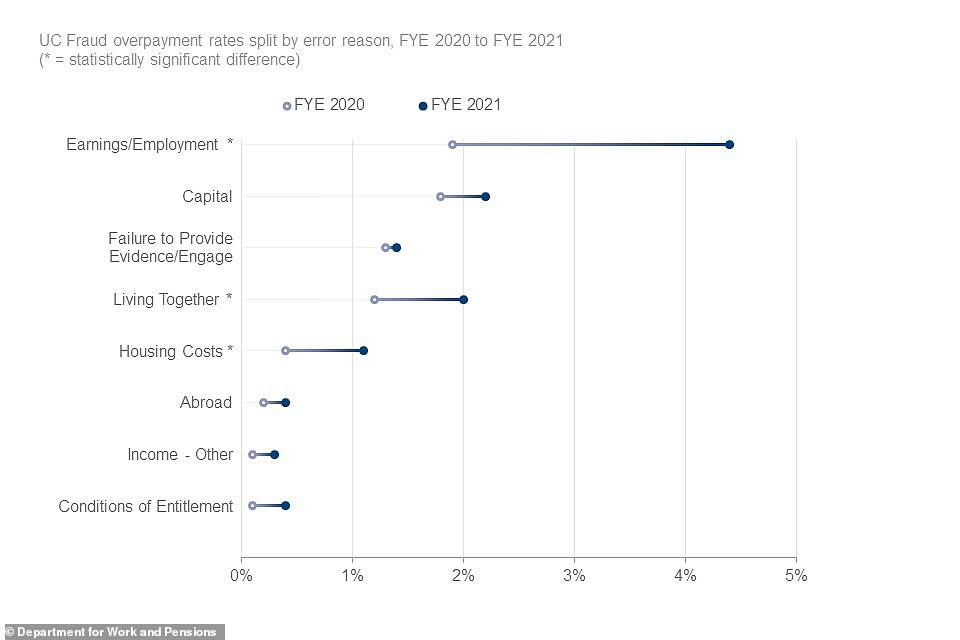 The rise in the fraud overpayment rate is primarily due to a 2.5 percentage point increase in earnings/employment

Many claimants now face receiving an ‘administrative penalty’ to repay amounts they were wrongly given in future benefits, while the DWP said criminal prosecution will be used in the biggest cases of ‘egregious fraud’.

Claimants who gave the wrong information in the heat of the pandemic risk being slapped with an ‘administrative penalty’, forcing them to repay any amounts they were wrongly given out of their future benefits.

But Labour MP Stephen Timms, chairman of the Commons Work and Pensions Committee, told the Daily Mirror: ‘DWP has falsely accused many people of fraudulently claiming a universal credit advance.

‘They took money out of the salary of one of my constituents, and he didn’t get it back for over a year. I worry that this new checking exercise could cause similar problems.’ 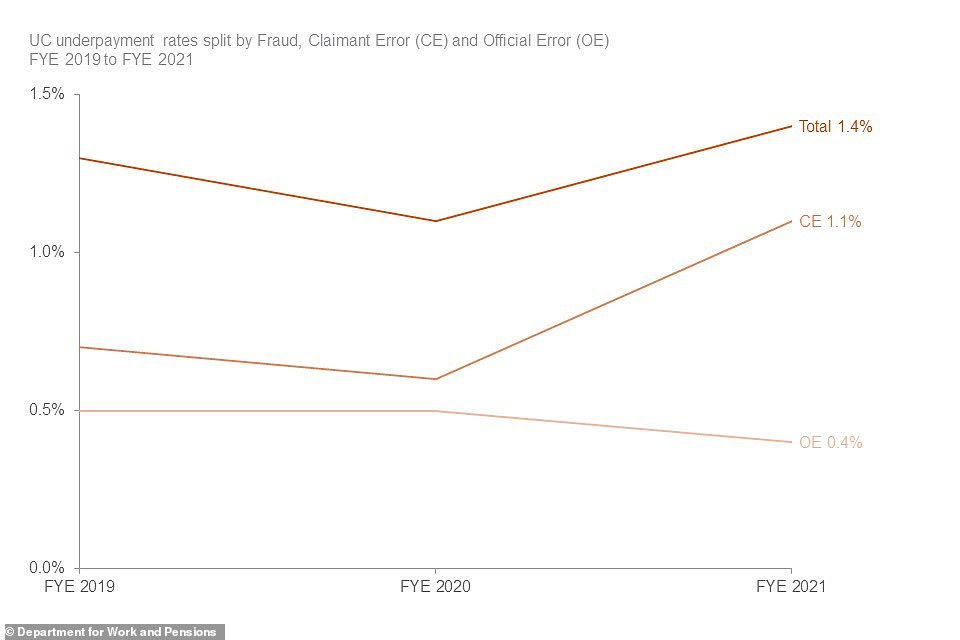 The rise in the universal credit underpayment rate has been driven by an increase of 0.5 percentage points in claimant error 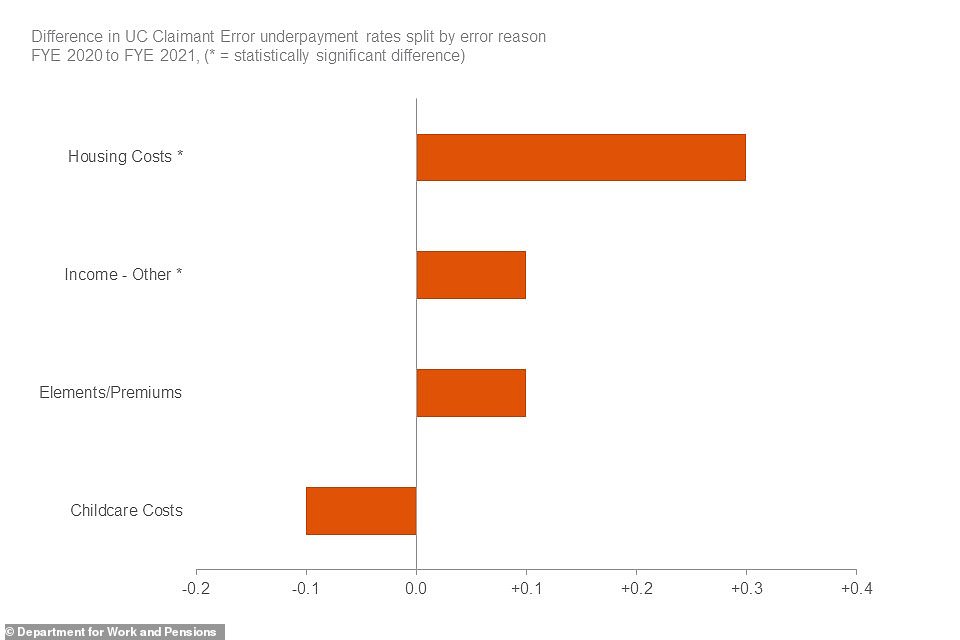 The increase in the claimant error underpayment rate is mainly due to a 0.3 percentage point increase in housing costs 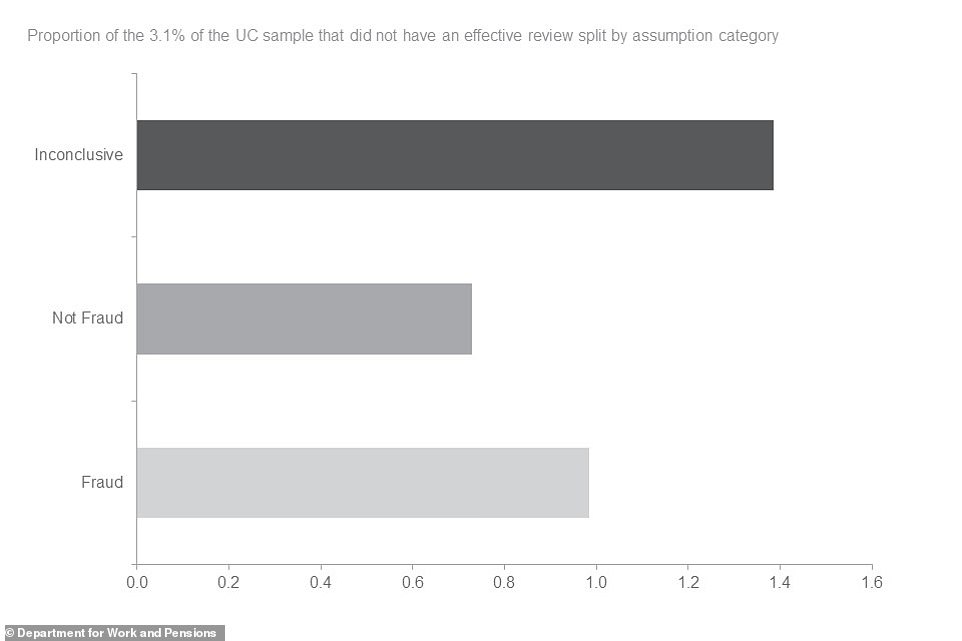 Another Labour MP and committee member, Neil Coyle, told the newspaper: ‘Universal credit has the highest fraud and error rate of any UK benefit ever introduced. Ministers have been ignoring its problems for far too long.’

A Department for Work and Pensions spokesman said today: ‘Fraud and error in the benefits system remains low with 95 per cent of benefits worth more than £200billion paid correctly.

‘We take any abuse of taxpayers’ money very seriously and those who claim benefits they are not entitled to will face criminal prosecution.

‘We also have robust plans in place to recover fraudulent claims and drive fraud and error down to the lowest feasible level.’