A white Bengal tiger was so underfed it had to eat soil in its enclosure at a zoo in China, a visitor has accused.

The visitor, who identified himself as Wang, said he was shocked to see the skinny white tiger – an endangered animal species – on a recently trip to Wuhan Zoo in central China.

Mr Wang added that there was no food on the ground, but the tiger continued licking the soil and even started to chew it in its mouth.

The zoo has denied the accusations, claiming the tiger is healthy. 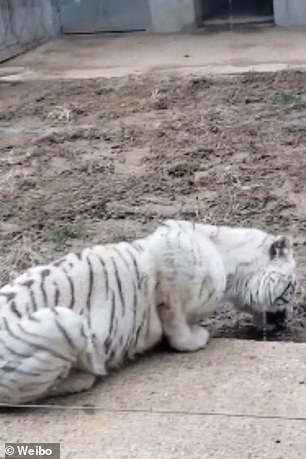 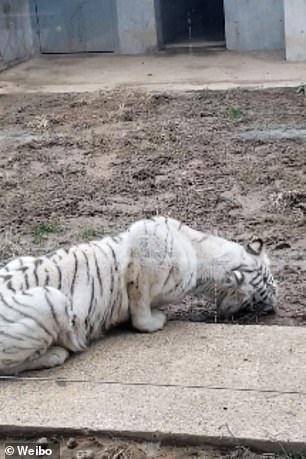 A visitor to the Wuhan Zoo in central China has accused keepers of mistreating a white Bengal tiger. He claimed that the beast was given no feed and had to eat soil out of hunger this week

Shocked by the scene, Mr Wang took a video which he uploaded to China’s Twitter-like Weibo platform.

The Weibo post from Tuesday said: ‘[The tiger] is so skinny it looks like a piece of firewood and so hungry it has to eat mud.’

The post urged Wuhan authorities to pay attention to the matter.

Speaking to Pear Video, an angry Mr Wang said he did not see any food in the tiger’s enclosure when he visited. He condemned the poor treatment of the animal by the zoo’s staff.

In response, the zoo claimed that the tiger was eating food crumbs off the ground.

The tiger had just been fed a whole chicken before, according to a comment left by the official Weibo account of the zoo under Mr Wang’s video.

The zoo added that the tiger was seven years old and weighed around 120 kilograms (264 pounds). It insisted that it was healthy and had a good appetite.

The average weight for an adult Bengal tiger is 550 pounds, according to WWF. 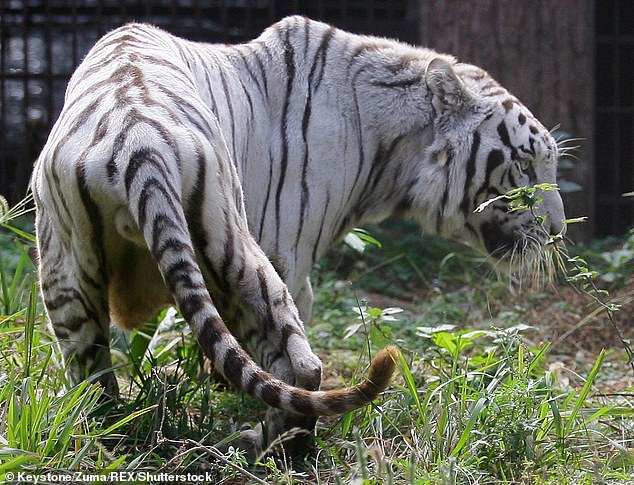 White Bengal tigers are white because of a genetic anomaly and are extremely rare. In the file photo above, a white Bengal tiger roams its enclosure at the Jiufeng Forest Zoo in Wuhan

A spokesperson from the zoo told Beijing Youth Daily that the zoo had enough food supply for the tiger but the tiger ‘can’t eat too well’.

‘Because it doesn’t move around a lot, if it eats too much it will become too fat,’ the spokesperson said.

‘If a person becomes fat, he or she will fall ill. It’s the same for animals.’

A baby White Bengal tiger can only be born when both of its parents carry the rare gene, which turns up naturally about once per 10,000 births, according to Animal Corner.

Their striking colour has made them popular with zoos and circuses.