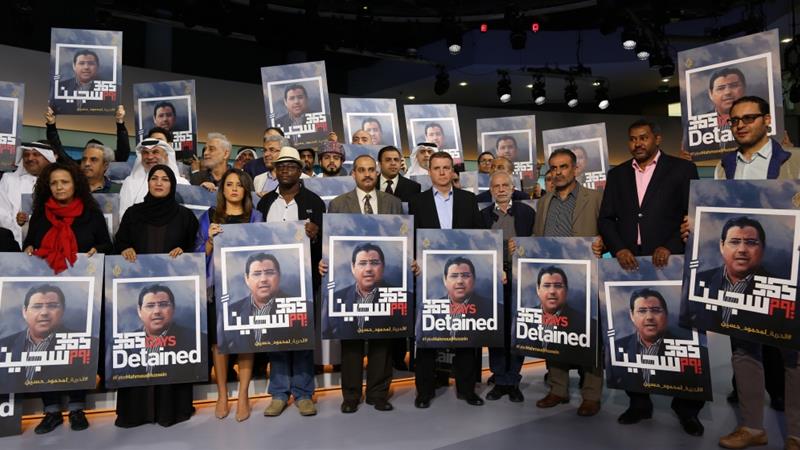 A UN body has ruled the detention of an Al Jazeera journalist held by Egyptian authorities for more than one year as “arbitrary”.

The Office of the United Nations High Commissioner for Human Rights (OHCHR) also demanded the immediate release of Mahmoud Hussein, an Egyptian native who worked for Al Jazeera Arabic.

The 55-year old was arrested in December 2016 after travelling from Doha, where he was based, to Cairo to visit his family.

OHCHR issued its report based on a petition submitted by the Washington, DC-based Robert F Kennedy Human Rights.

“Hussein’s arbitrary detention is far from an isolated case; the Egyptian authorities’ tactic of using indefinite pre-trial detention to restrain those who dare to act independently is a cornerstone of its repression of the press, civil society, and protesters,” said the rights group, in a statement posted to its website.

“The [OHCHR] Working Group’s decision in Hussein’s case is an important step in holding the Egyptian government accountable for these widespread human rights violations.”

Hussein was accused of “incitement against state institutions and broadcasting false news with the aim of spreading chaos”, allegations he, his lawyers and Al Jazeera strongly deny.

Hussein, who has been held in the notorious Tora maximum-security prison and suffers from physical and severe psychological duress, has not been officially charged.

The OHCHR report said that there is “no legal basis in Egyptian law” for Hussein’s continued pre-trial detention.

Furthermore, authorities have “failed to produce a single piece of evidence that could justify any of the charges informally brought against him.”

Elizabeth Witchel from the Committee to Protect Journalists, told Al Jazeera that while the UN process is good, “constant pressure” must be kept up.

“We need bilateral pressure,” she said. “We need pressure from intergovernmental institutions and what we’re seeing around the world is the use of anti-state laws that are vaguely worded and used against journalists and critics.”

Witchel went on to say that the year 2017 was a “historical high” in terms of the imprisonments of journalists that CPJ has documented around the world.

“In that sense we’re seeing that it is an extremely precarious time to be a journalist, particularly if you are a local one,” she added.

OHCHR has asked the Egyptian government to “take the steps necessary to remedy the situation of Mr Hussein without delay and bring it into conformity with the standards and principles set forth in the international norms on detention, including the Universal Declaration of Human Rights and the International Covenant on Civil and Political Rights.”

OHCHR’s Working Group said that the “appropriate remedy” would be the immediate release of Hussein and provide him and his family compensation and other reparations.

The UN body has given the Egyptian government six months starting from the publication date of its report – January 15, 2018 – to provide information regarding a number of issues, including compensation and an investigation into the violation of Hussein’s rights.

The Egyptian authorities responded to the OHCHR’s first request back in August 2017 to provide details regarding Hussein’s situation at the time by saying that all detainees enjoyed rights and safeguards.

The authorities also said that it respects all the ratified international treaties, and ensured that the national legal framework was in accordance with those conventions and its provisions, specifically articles 6 and 9 of the Covenant.

OHCHR expressed its concern about the “pattern of arbitrary detention, torture and enforced disappearance” carried out by the Ministry of Interior Homeland Security Agency.

It also noted that Egypt ranks third in the world in terms of journalists arrested, with 24 journalists held in detention. Since 2011, 10 journalists have been killed, without proper investigations being conducted.

In 2013, Al Jazeera has been accused by Egypt of supporting the Muslim Brotherhood, which was banned by the government from operating in the country and branded as a “terrorist” organisation.