A festive flooding! Britain braces for torrential rain and thunder with more than SEVENTY flood warnings in place ahead of great Christmas getaway

Most of the 35 alerts and five more-serious warnings for England today were in place in the South West after it was hit by downpours and strong gales yesterday – with Somerset and Devon particularly affected.

There were also four alerts and 22 warnings for Scotland this morning, as well as four alerts in Wales, which are all in place some 48 hours before the great Christmas getaway begins on Friday. 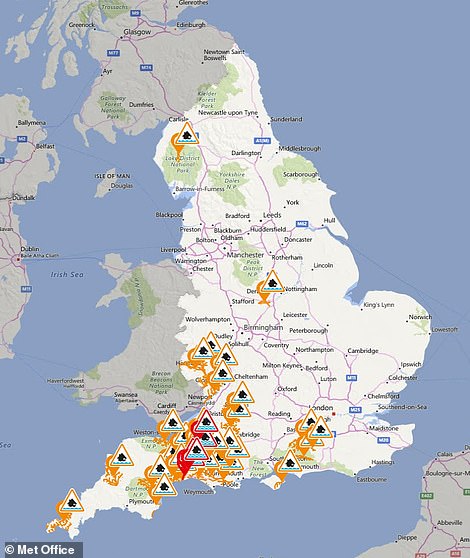 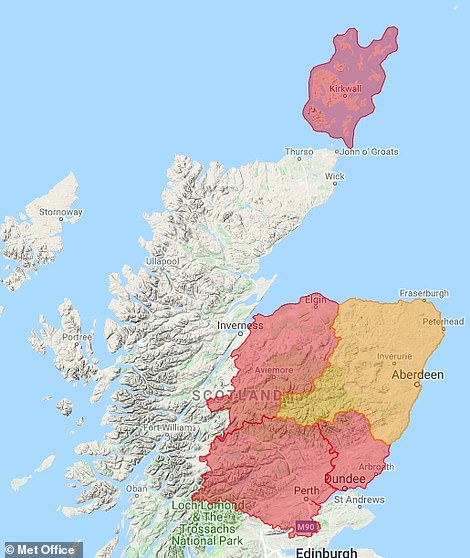 There are 35 alerts (in orange) and five warnings (in red) for England today (left), while Scotland is also on flood watch (right) 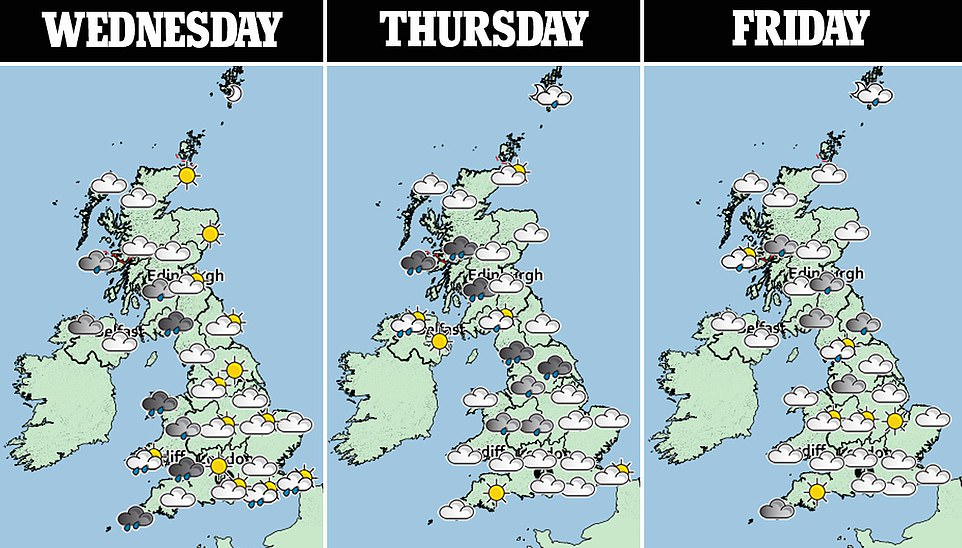 Western parts of the country face frequent showers this afternoon, before further rain follows tonight for much of Wales, Northern Ireland, western England and southern Scotland – as well as the odd rumble of thunder.

This morning will be mostly dry and bright with some cloud in eastern parts, although there will be some showers for southern and western areas – before the heavier rain moves in later on.

Tomorrow will bring sunny intervals and showers, with the North West seeing mostly mostly cloudy weather with showers merging to form longer spells of rain. However, eastern parts should remain dry for most of the day.

On Friday, when hundreds of thousands of families will be driving across the country for Christmas, it will be cloudy with outbreaks of rain in the North, and there will be sunny spells in the South but with strong winds. 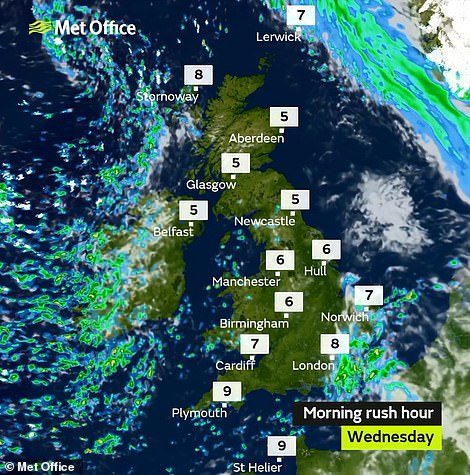 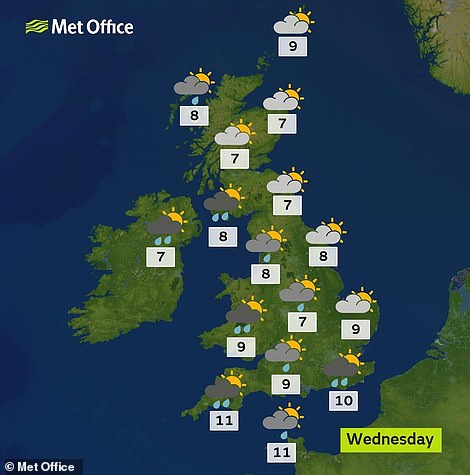 Rain affected some eastern areas this morning but it was dry elsewhere (left), before the West becomes wetter later (right) 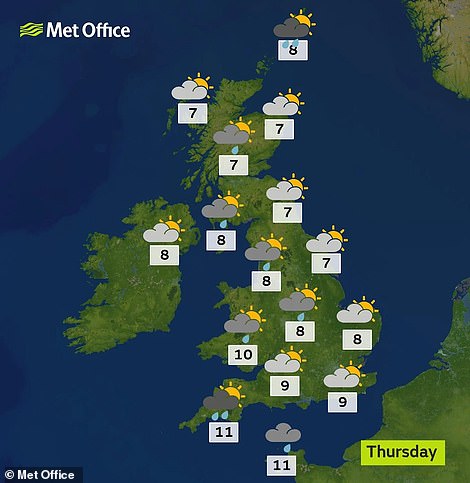 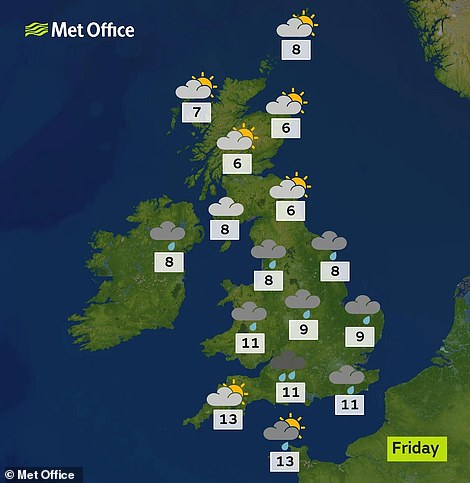 Tomorrow will bring wet conditions to the North West (left), while the weather could be disruptive on Friday (right) 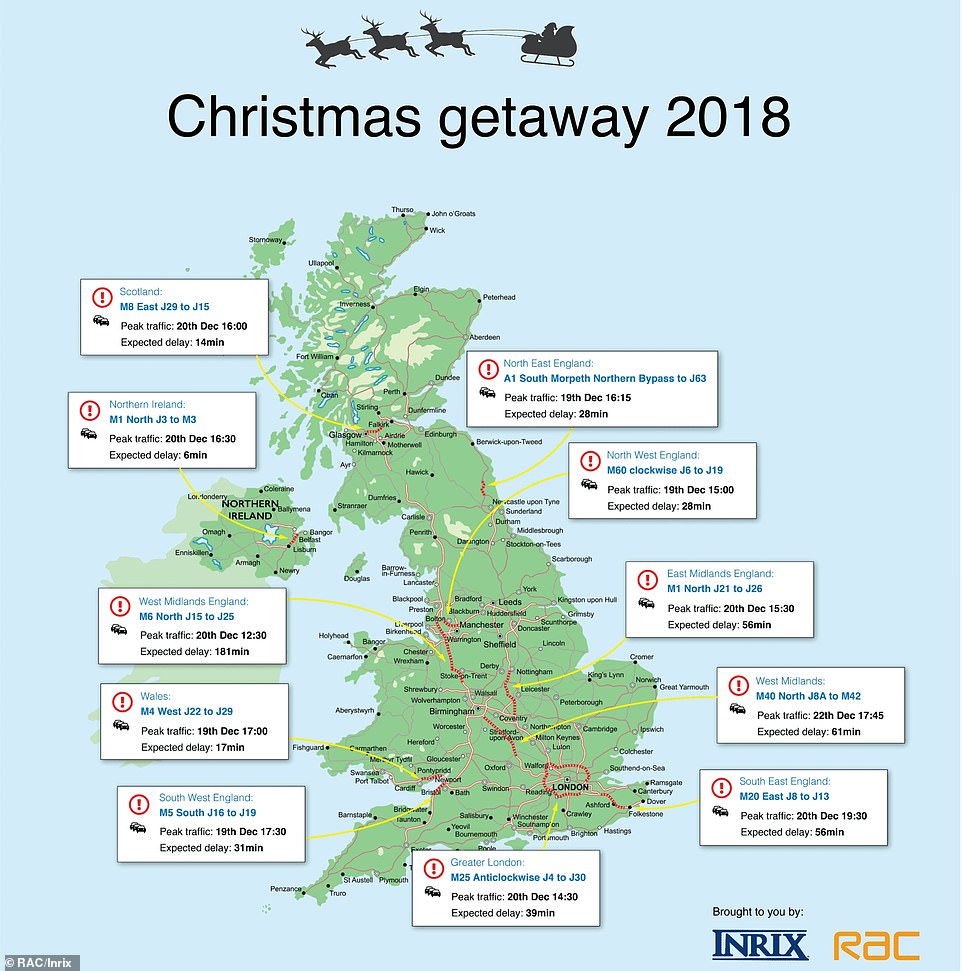 Saturday will begin with a bright start, but it will become cloudy later, especially in the South – and there will also be scattered showers in the South and West. More rain is likely on Sunday in all places except northern Scotland.

Yesterday parts of the country were under a Met Office ‘be aware’ weather warning for wind, with severe gales from the Atlantic battering Scotland’s west coast and mountain ranges in the morning, before easing later on.

Gusts of 116mph were recorded on the top of Cairn Gorm mountain, while the range on South Uist saw winds of 81mph. Meanwhile a ferry was smashed by a giant ‘freak’ wave on the way to Cairnryan port in Wigtownshire.

Research by the RAC and the traffic analysis firm Inrix suggests tomorrow and Friday will be the worst days for congestion on the roads for the Christmas getaway, with 2.5million and 2.8million vehicles driving across the UK.