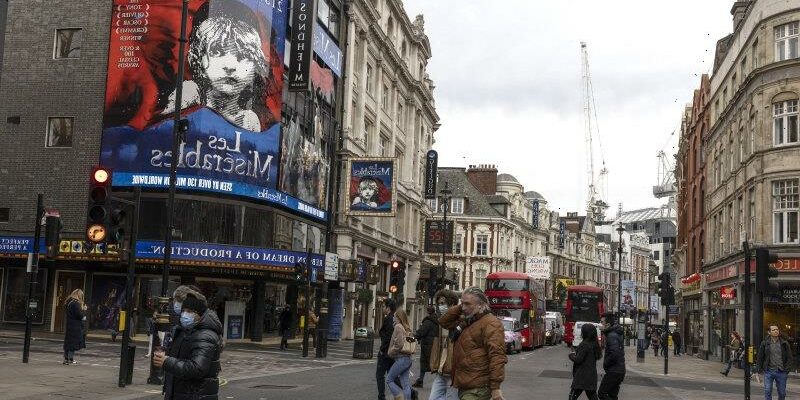 The UK reported more than 100,000 new coronavirus cases in a day for the first time, adding to the pressure facing Prime Minister Boris Johnson over whether to impose new restrictions after Christmas.

Some 106,122 new cases were logged on Wednesday as the fast-spreading Omicron variant spurs a record wave. That’s a leap of more than 15,000 on Tuesday, according to official data. Before this month, the UK had never registered more than 70,000 cases in a day. 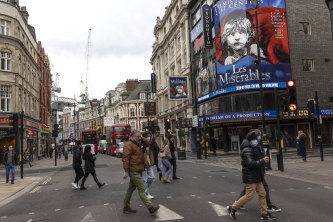 Nearly two dozen theatres have cancelled shows in recent days due to the latest COVID wave in London.Credit:Getty Images

The huge surge in infections poses a major dilemma for Johnson, who less than 24 hours ago promised there will be no new curbs on freedoms in England before Christmas, while signalling he may have to tighten rules thereafter.

The Prime Minister is boxed in on one side by his scientific advisers, who say the sooner he takes further action, the less severe the latest wave will be, and mutinous members of his Conservative Party who rebelled in record numbers last week against lighter-touch measures. Johnson only got them approved with the support of the opposition Labour Party.

That meant the Prime Minister could give Britons the Christmas he has long promised – some restrictions but no limits on family gatherings.

The big question is over what comes next.

The numbers are compelling: cases have exceeded 90,000 on five of the past six days. What’s less clear is how that is translating to hospitalisations, which have not risen significantly nationwide.

Preliminary data from Scotland suggested patients infected with Omicron are two thirds less likely to need hospital treatment than those sick with the previously dominant Delta strain, according to a University of Edinburgh study published on Wednesday (local time). Yet the new strain is also more contagious, potentially outweighing the benefit of lower severity, the researchers said.

What happens in London, seen as the centre of the Omicron outbreak, may be key to what Johnson decides. While hospitalisations in the city remain well below the peak last winter so far, they are rising steadily. They’ve more than doubled since November 27, when the UK first reported cases of the new strain.

The signs for now are Johnson is reluctant to make what would be a politically difficult decision to curb freedoms. Last week, 101 Tory MPs opposed the introduction of COVID passes to gain entry into venues and events.

The Prime Minister would likely face a similar – or even bigger – rebellion if he were to try to pass the sort of measures being suggested by the government’s Scientific Advisory Group for Emergencies, including a ban on indoor mixing of different households, limits on the number of people who can meet outdoors, and the closing of indoor hospitality.

Also on Wednesday, Wales announced new curbs starting on December 26, including limiting gatherings to six people in hospitality and cinemas, table service only in pubs and restaurants, and capacity limits on large events.