Migrants in the UK are sending home £21m to their families back home, a study has revealed.

This makes the UK the fourth largest source of remittances after the US, Saudi Arabia and the United Arab Emirates, with a global total of some £483bn in 2017, according to the World Bank. 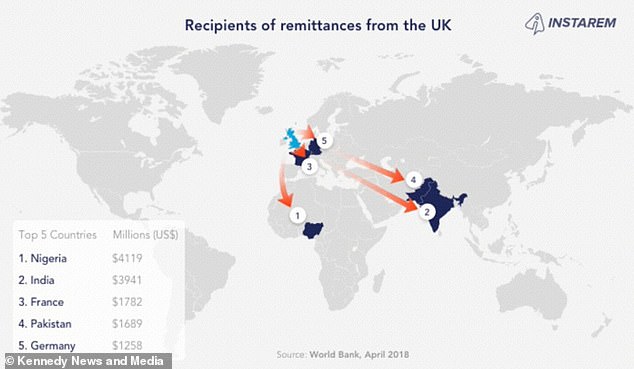 While migrants in the UK were sending large amounts of cash back home, Australia was the largest sender of remittances to the United Kingdom, with US$1.08m being received from there.

The US, Canada, Spain and South Africa were the next biggest senders.

India is the largest receiver of remittances in the world, receiving a total of US$68,968m.

China is the second largest receiver of remittances, after India, receiving a total of US$63,860m.

The US is home to the largest number of migrants from developing countries and is the largest sender of remittances in the world. 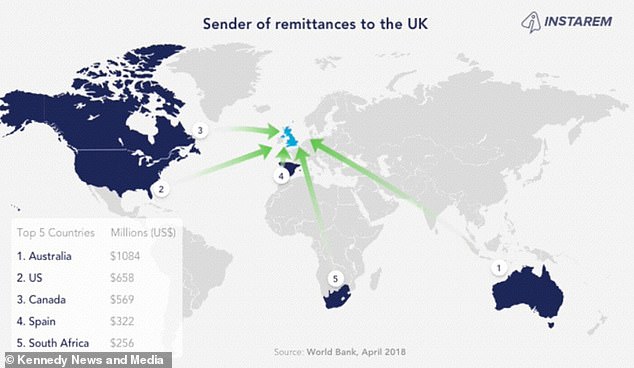 Senders of remittances to the UK, showing Australia leading the way

These estimates are made by the World Bank using data from formal channels such as banks and other businesses that transfer money.

Co-founder and CEO at digital cross-border money transfer company InstaReM, Prajit Nanu, said: ‘These international money transfers by migrants are, for many, the only source of income for families globally which help them to get basic necessities, thus elevating overall quality of life.

‘Migrants typically transfer a substantial part of their earnings to their home countries, contributing to their overall income.

‘These days it is not rare to see even people from developed nations migrating to other countries as part of their professional careers.

‘As well as a huge number of people travelling overseas for business and education reasons.’