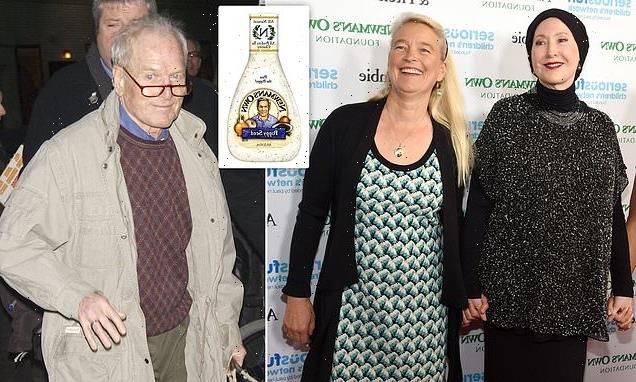 Two of Paul Newman’s daughters are suing his own foundation, which they allege is ‘under assault’ from its board of directors who they fear are straying from their father’s wishes.

Elinor ‘Nell’ Newman, 63, and Susan Newman, 69, filed the lawsuit against Newman’s Own Foundation, the charity that their father founded in 2005, three years before his death.

Newman’s Own Foundation receives the proceeds of sales of Newman’s Own products and was designed to ensure that they are spent on charitable causes.

Nell and Susan claim that one of the conditions on which their father created the charity was that they would each receive a yearly sum of $400,000 to give to charities of their own choosing.

It was a failsafe to ensure that their father’s passion for philanthropy was always adhered to.

But they claim in their lawsuit the board of directors, which does not include any members of the Newman family, has strayed from that vision. 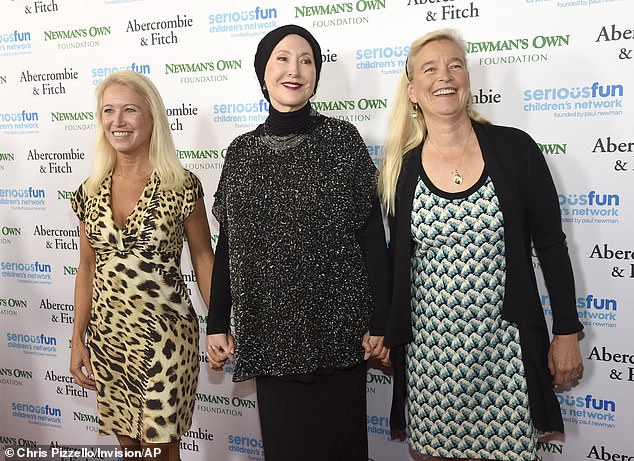 Susan Newman, 69, (center) and Elinor ‘Nell’ Newman, 63, (right) filed the lawsuit against Newman’s Own Foundation, the charity that their father founded in 2005, three years before his death. They are photographed with their sister Clea (left) in 2015 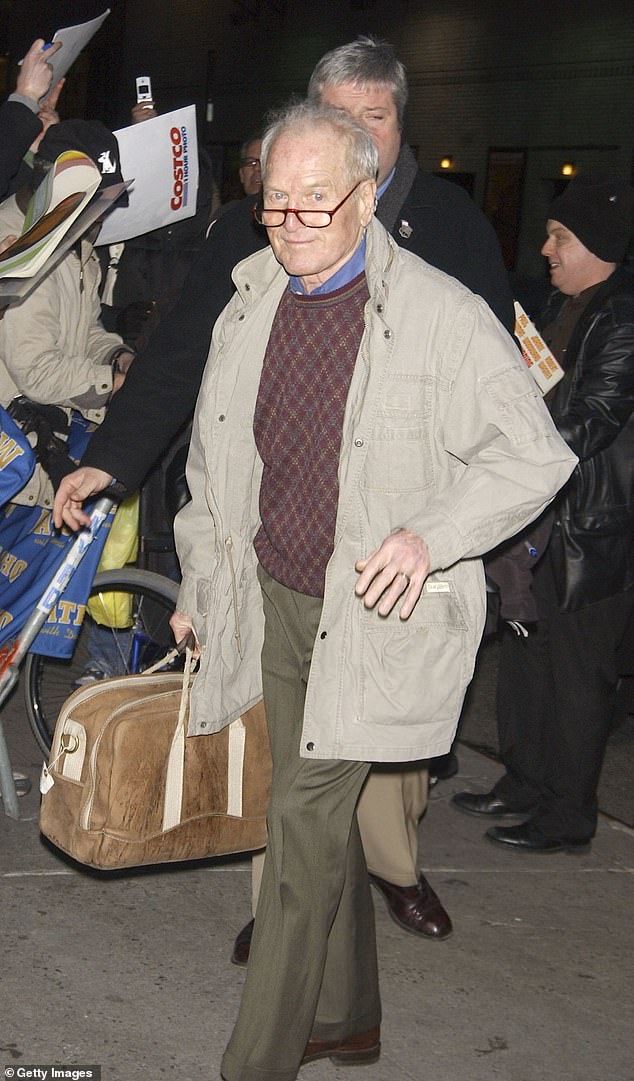 The late actor Paul Newman is shown in 2007, 18 months before his death. He formed the foundation in 2005 as a way of safeguarding his charitable vision, his daughters say 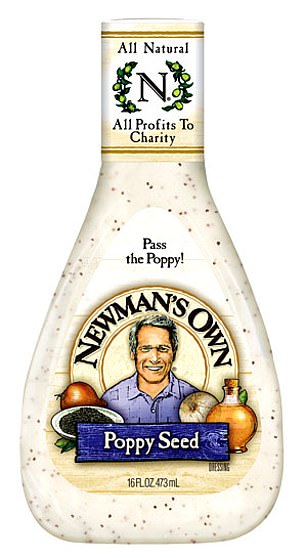 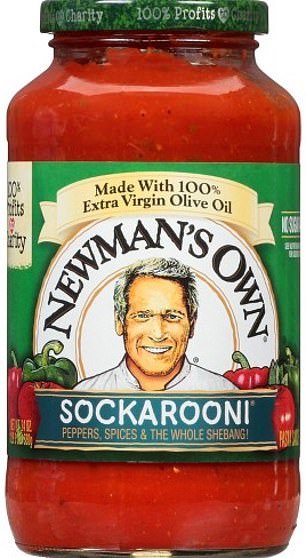 The foundation takes the profits from the sales of Newman’s Own products and donates them to charity. Newman’s vision was for 100% of the proceeds to go to charitable causes

They say that their father was committed to supporting a variety of causes like the arts, fighting climate change and raising awareness of environmental issues.

However the board of directors at the charity has now tunneled its focus into only working to support needy children, they say.

Part of their complaint is that the foundation has slashed the $400,000-a-year charitable payments in half.

The sisters – who are two of the actor’s five surviving children – are also asking for $1.6million in damages to make up for the payments they say they were owed but missed out on.

‘A cornerstone of Mr. Newman’s convictions was his philanthropic legacy living on through his family. 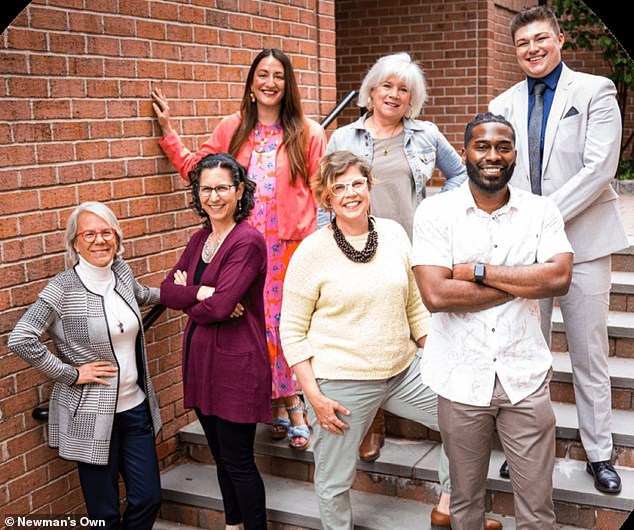 The board of directors at Newman’s Own Foundation. The sisters say their father’s legacy is ‘under assault’ from the board, which has strayed from his vision and is pushing them out of the organization 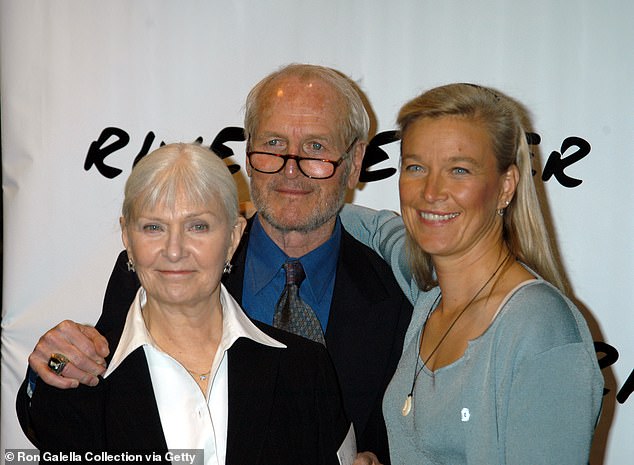 Newman had six children from two marriages. Above, he is shown with daughter Nell and his second wife Joanne Woodward, in 2003 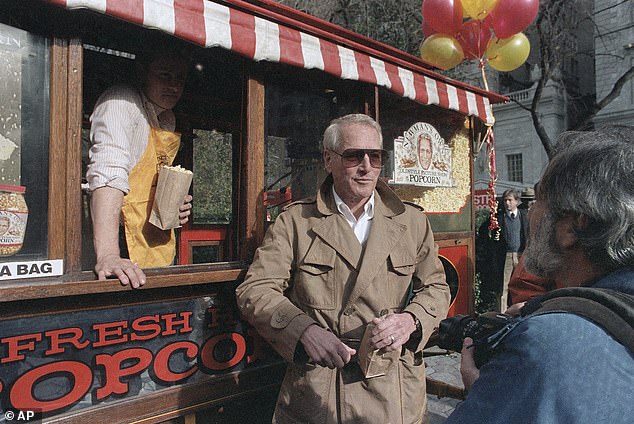 Newman is shown donating his popcorn on the streets of New York in 1984. He started the range of products in the 1980s after gifting salad dressing to friends who loved it and demanded more 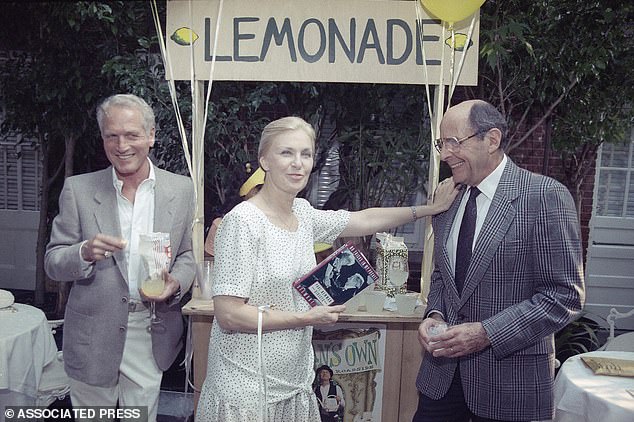 ‘Over the years, however, Newman’s Own Foundation lost its way and strayed from its mission to preserve and honor Paul Newman’s legacy.

‘The years since Mr. Newman’s death consist of a long and consistent pattern of disregard, by those in control, of Mr. Newman’s specific intentions and direction, coupled with mismanagement, scandal, and questionable practices,’ the lawsuit reads.

Newman, the legendary Hollywood icon, started making salad dressing in 1980 to give to friends as gifts.

He declared that he wanted to ‘give it all away’. By 1992, the business raised $50million for charities. In 2005, Newman founded the Newman’s Own Foundation to ensure that the proceeds of sales would always go towards philanthropic causes, after his death. 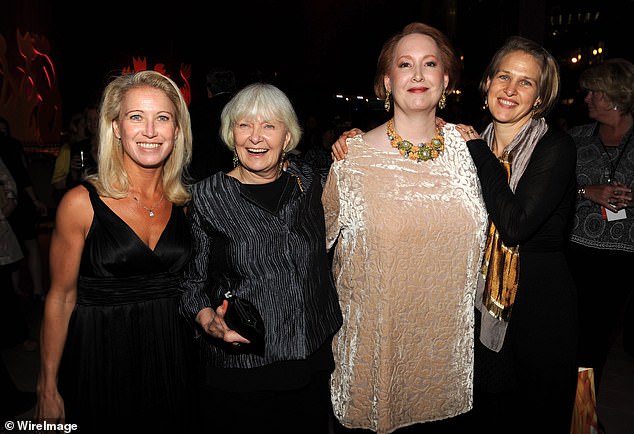 Paul Newman had six children from his two marriages. Above, Clea Newman with mother Joanne Woodward, half-sister Susan and her sister Melissa in 2009, a year after their father’s death from cancer 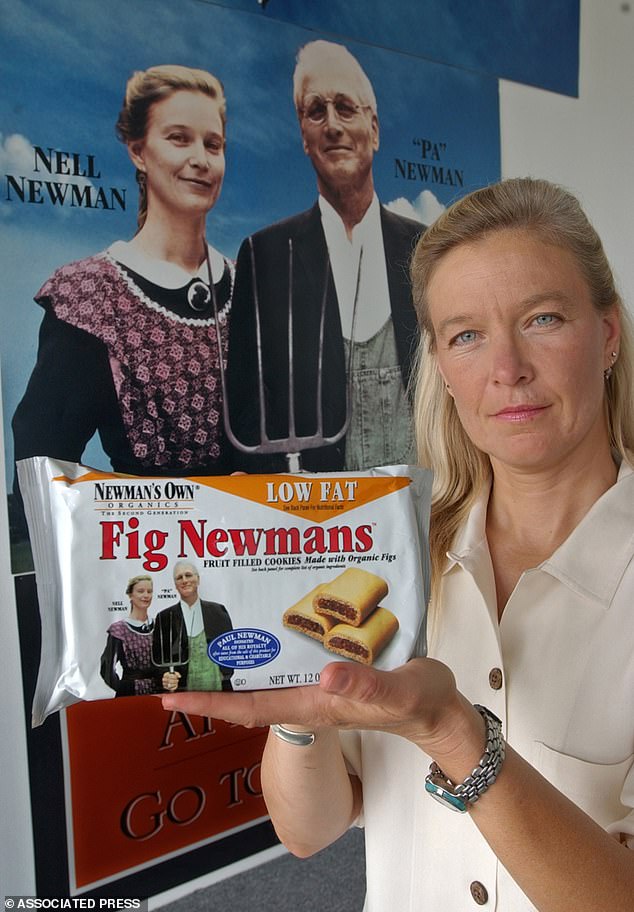 In 1993, Nell convinced her father to launch a spin-off range of organic foods known as Newman’s Own Organics. She served as the company president for years

Newman died in 2008. His daughters claim in their lawsuit that three months beforehand, he amended his will to strip some of the clauses of the foundation, but that he wasn’t in his right mind when he did so.

It stripped the foundation of the obligation to give the sisters the $400,000-a-year Newman had previously promised them.

Foundation CEO Miriam Nelson also recently announced that the charity was changing its vision to focus only on kids.

‘We believe that if Paul Newman were still with us today, he would embrace our focus on kids,’ she said in an announcement.

The board of directors defended its actions and said the lawsuit is ‘meritless’.

They insist that they are merely following the law surrounding charities.

‘The Board’s philanthropic giving decisions vary each year and the importance of our mission requires us to make the best use of our finite resources. Paul Newman established the Newman’s Own Foundation as a private foundation in 2005. The Foundation is governed by a board of directors that must adhere to regulations applicable to 501(c)(3) organizations.

‘Best practices surrounding philanthropic organizations do not allow for the establishment of perpetual funding allotments for anyone, including Nell and Susan Newman.

‘A meritless lawsuit based on this faulty wish would only divert money away from those who benefit from Paul Newman’s generosity.

‘While we expect to continue to solicit Newman family recommendations for worthy organizations, our funding decisions are made each year and will continue to reflect the clear aim of Paul Newman and our responsibility to the best practices governing private foundations,’ a spokesman told DailyMail.com.

A lawyer for the sisters did not immediately respond to inquiries. Newman had six children from two marriages before his death. His son Scott died at the age of 28 in 1978 from a drug overdose.

None of the other children are involved in the lawsuit, and it is unclear whether Newman also gave them stipends from the charity to give to their own causes.

The actor was 83 when he died in 2008 after a battle with lung cancer.