This is the painfully awkward moment First Lady Melania Trump appeared to rip her hand out of her husband’s at the end of last night’s presidential debate.

Twitter erupted with speculation moments after the pair were filmed walking off stage together in Nashville, Tennessee.

Footage shows Melania and Jill Biden joining their husband’s onstage in Nashville, Tennessee on Thursday at the end of the third and final presidential debate ahead of the election on November 3.

While Jill Biden greeted her husband Joe with a warm hug, Melania simply stood next to Trump before eventually taking his hand as cameras snap photos of the two couples. As the Trumps turned to walk off stage, Melania appeared to yank her hand out of her husband’s grasp and walked away from him.

Hours later, the couple were photographed holding hands and smiling on their return to the White House. 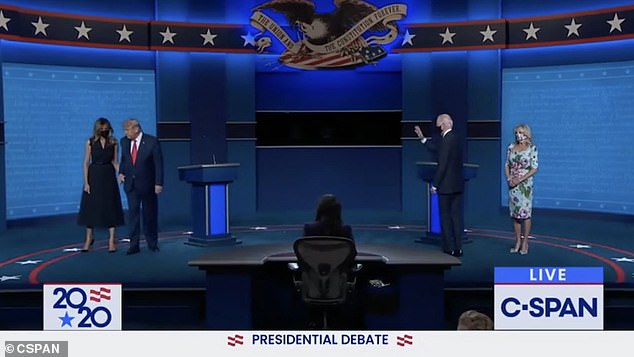 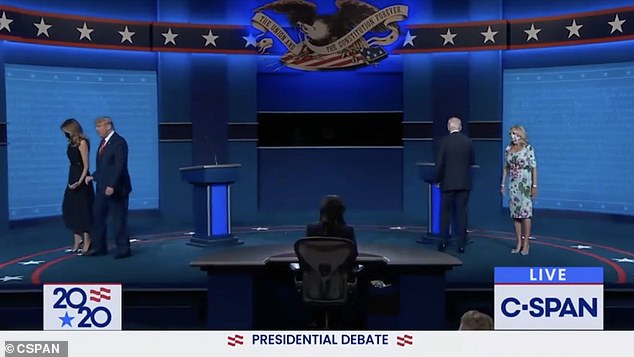 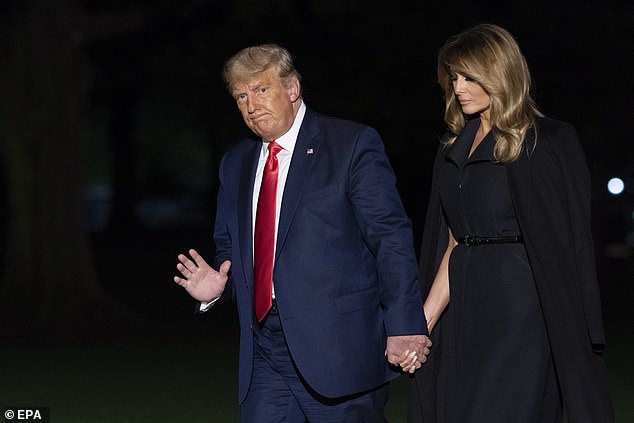 But that did not stop people speculating on Twitter about the bizarre interaction.

‘Looks like passport love on the rocks,’ another said.

A third quipped that the country song Stand By Your Man couldn’t have been a big hit in Slovenia, where Melania was born. 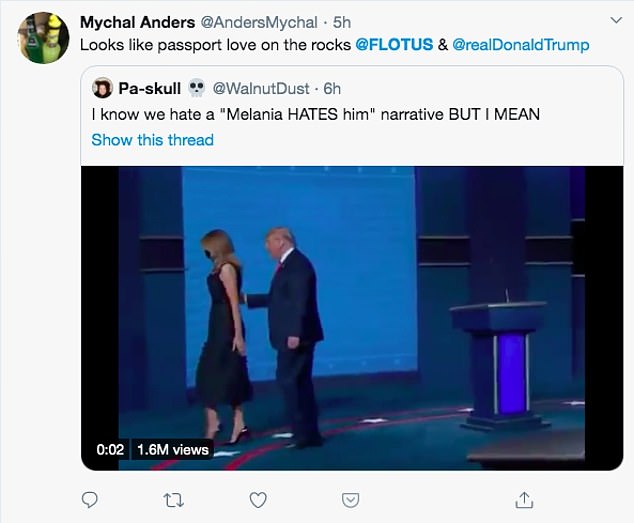 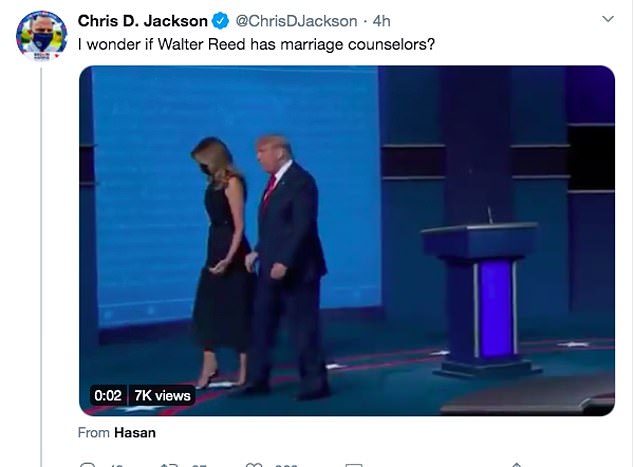 Prior to the debate, the Trumps were photographed together for the first time since testing positive for COVID-19 three weeks ago.

The pair were seen walking towards supporters at Nashville International Airport ahead of the event at Belmont University.

The Trumps held hands in photos showing their return to Washington later on Thursday night. 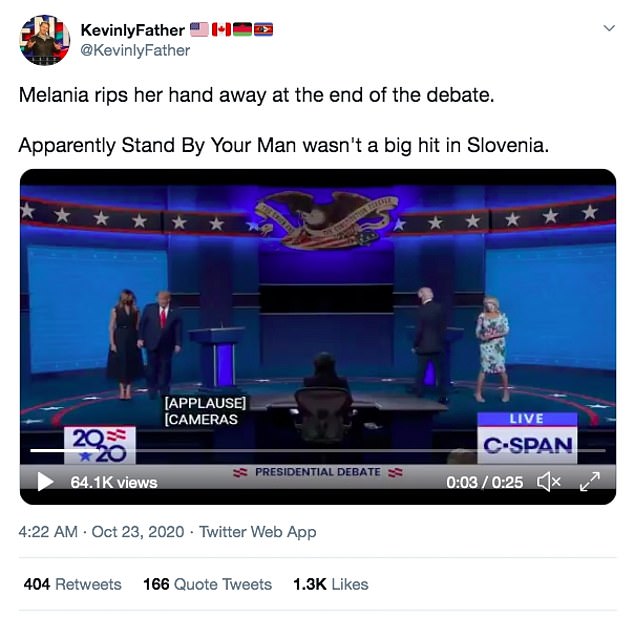 One Twitter user quipped that the country hit Stand By Your Man couldn’t have been very popular in Slovenia, where Melania was born 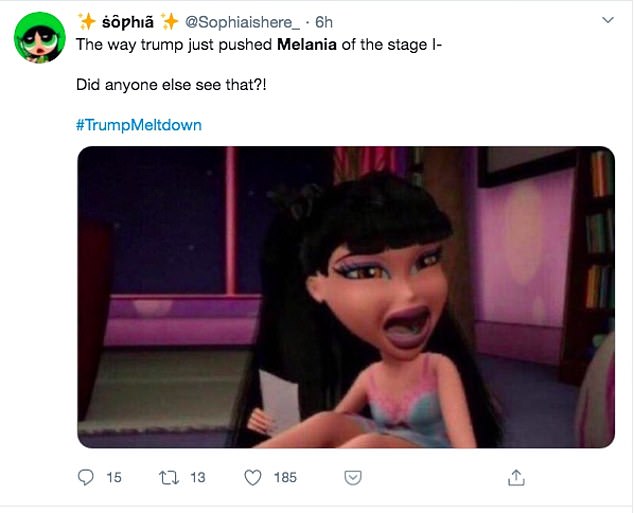 After Melania took her hand away, Trump placed his on her back, prompting one Twitter user to speculate that Trump had ‘pushed’ his wife off the stage

Two days earlier, Melania was forced to suddenly cancel an appearance on the campaign trail in Pennsylvania as she still had symptoms of the virus.

Her chief of staff, Stephanie Grisham, said that Mrs Trump ‘continues to feel better every day following her recovery’ but had a lingering cough so had decided not to travel ‘out of an abundance of caution.’

Instead, she made her first post-recovery appearance at the debate wearing a black face mask which matched her sleeveless black mid-length dress.

Jill Biden also masked up, sporting a covering with the same pattern as her floral dress.

Some social media users praised the women’s outfits, while others criticized Melania for not wearing a mask en route to the event.

The first lady was photographed without a mask on board Marine One.

Last week, Melania Trump took to the official White House website to detail her battle against Covid-19 and reveal that her son Baron had also been infected by the virus.

‘Luckily he is a strong teenager and exhibited no symptoms. In one way I was glad the three of us went through this at the same time so we could take care of one another and spend time together. He has since tested negative,’ she wrote. 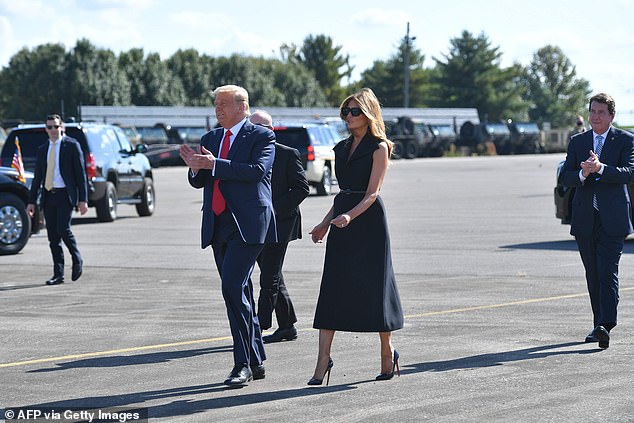 Donald and Melania Trump arrive in Nashville, Tennessee for the third and final presidential debate ahead of the election on November 3

She said her own symptoms were ‘minimal’ but hit her all at once, adding  ‘it seemed to be a roller coaster of symptoms in the days after.’

The First Lady added that she opted for vitamins and healthy food while suffering from the virus, which has no known cure.

She also thanked her doctor and his team and encouraged Americans to ‘live the healthiest life they can’ amid the pandemic.

Trump boasts that he is ‘immune’ to COVID-19.

‘I can tell you from personal experience that I was in the hospital. I had it. And I got better. And I will tell you that I had something that they gave me, a therapeutic, I guess they would call it, some people could say it was a cure.

‘But I was in for a short period of time and I got better very fast or I wouldn’t be here tonight.

‘And now they say I’m immune. Whether it’s four months or a lifetime, nobody has been able to say that, but I’m immune.’

Trump emphatically claims he is the ‘least racist person in the room’ despite calling Black Lives Matter a ‘symbol of hate’.

‘I have criminal justice reform done, and prison reform, and opportunities, I took care of Black colleges and universities. I don’t know what to say. They could say anything.

Trump tells Biden he only ran for president because he and Obama failed.

Trump accuses Biden of taking money from China and Ukraine.

Trump says Americans can’t lock themselves ‘in a basement like Joe’ while speaking out against another lockdown.

‘We cannot lock ourselves up in a basement like Joe does. He has the ability to lock himself up. I don’t know, he’s obviously made a lot of money someplace, but he has this thing about living in a basement. People can’t do that.’

Biden sarcastically calls Trump ‘Abraham Lincoln’ after the president claimed he was the ‘least racist person in the room’.

‘Abraham Lincoln here is one of the most racist presidents we’ve had in modern history. He pours fuel on every single racist fire. This guy has a dog whistle as big as a foghorn’.

‘He’s legitimized North Korea. he’s talked about his good buddy – who’s a thug, a thug – and he talks about how we’re better off, and they have much more capable missiles able to reach US territory, much more easily than ever before.’

Biden dismisses Trump’s claim that the coronavirus ‘is going away’.

‘If you hear nothing else I say tonight, hear this … anyone that’s responsible for that many deaths should not remain president of the United States of America.’

Biden announces he will ‘transition from the oil industry’ in favor of renewable energy.