Emphasizing that former Army Gen. Don Bolduc puts "country first," former Rep. Tusli Gabbard of Hawaii urged the lunchtime crowd at the Eggshell Restaurant "to support" the Republican Senate nominee in the battleground state of New Hampshire "and to bring at least 10 of your friends along with you when it comes time to vote."

Gabbard, who made history as the first Hindu member of Congress and who ran unsuccessfully for the 2020 Democratic presidential nomination, made headlines last week by announcing that she was leaving the Democratic Party that she charged "is now under the complete control of an elitist cabal of warmongers driven by cowardly wokeness, who divide us by racializing every issue & stoke anti-white racism."

Fast-forward less than a week and Gabbard, a former Democratic National Committee vice chair, is in New Hampshire, on a two-day campaign swing with Bolduc, the outsider, MAGA-style Republican, who's challenging former governor and first-term Democratic Sen. Maggie Hassan in a Senate race that's among a handful across the country that may determine if the GOP wins back the chamber's majority in next month's midterm elections.

But Gabbard, who had become over the past year and a half a vocal Democratic critic of President Biden, says her support of Bolduc isn't a step towards joining the Republican Party. 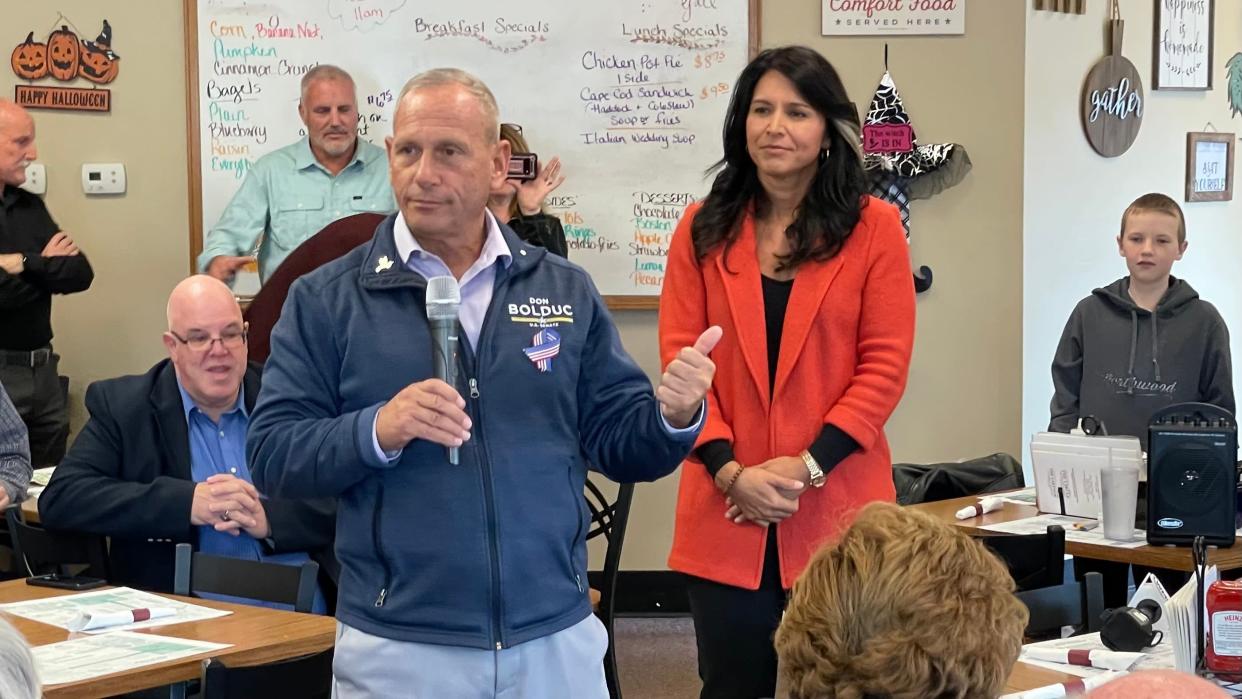 "I'm an independent, and I've laid out the reasons why today's Democratic Party, that is controlled by fanatical ideologues, that stands against freedom, why it's a party I can no longer be associated with. I'm here campaigning with Don Bolduc because I know he's committed to putting country and the American people first, and I think that more politicians more people running for office would be smart to do the same," she emphasized in an interview with Fox News.

Asked about her unusual pairing with Bolduc, Gabbard responded that "it's only an odd couple you're paying attention to the wrong things. I think it makes every bit of sense when you look at two people who've dedicated our lives to serve our country, both in uniform and now in public office. It makes every sense when you look at the things, the fundamental foundational things that we share in common, which is the constitution, it's freedom. It's the Bill of Rights. It's taking care of serving the needs of people here in New Hampshire and across the country."

WATCH: TULSI GABBARD EXPLAINS WHY SHE LEFT THE DEMOCRATIC PARTY

Both Bolduc and Gabbard share a military background. Bolduc spent more than three decades in the military and served ten tours of duty in the War in Afghanistan. Gabbard, who serves as a captain in the Hawaii National Guard, was deployed in the war in Iraq from 2004-2005.

Gabbard camped out in New Hampshire ahead of the February 2020 presidential primary, when she finished in seventh place. But she said her return to the state which for century's held the first primary in the White House race isn't about presidential politics.

"It is not at all on my mind, nor should it be on anyone else's because right now people are struggling just to pay their heating bills just to make ends meet," Gabbard said when asked about the possibility of launching another presidential campaign. "We need to focus on the here and now and start bringing about the changes that will protect our freedom and our future."

The trip by Gabbard to New Hampshire is grabbing plenty of national attention for Bolduc, who currently trails Hassan by the mid-to-upper single digits in the latest public opinion polls. He argued that her presence "helps me with everybody. I think it helps me with Republicans, Independents, Democrats, Free Staters, Libertarians. It helps me across the political spectrum."

Gabbard, during her years in Congress and during her presidential campaign, was a strong supporter of the single-payer health care plan championed by longtime Sen. Bernie Sanders of Vermont, the 2016 and 2020 runner-up for the Democratic presidential nomination.

But Bolduc said he can put his policy differences with Gabbard aside because the two agree on the urgency of this political moment. 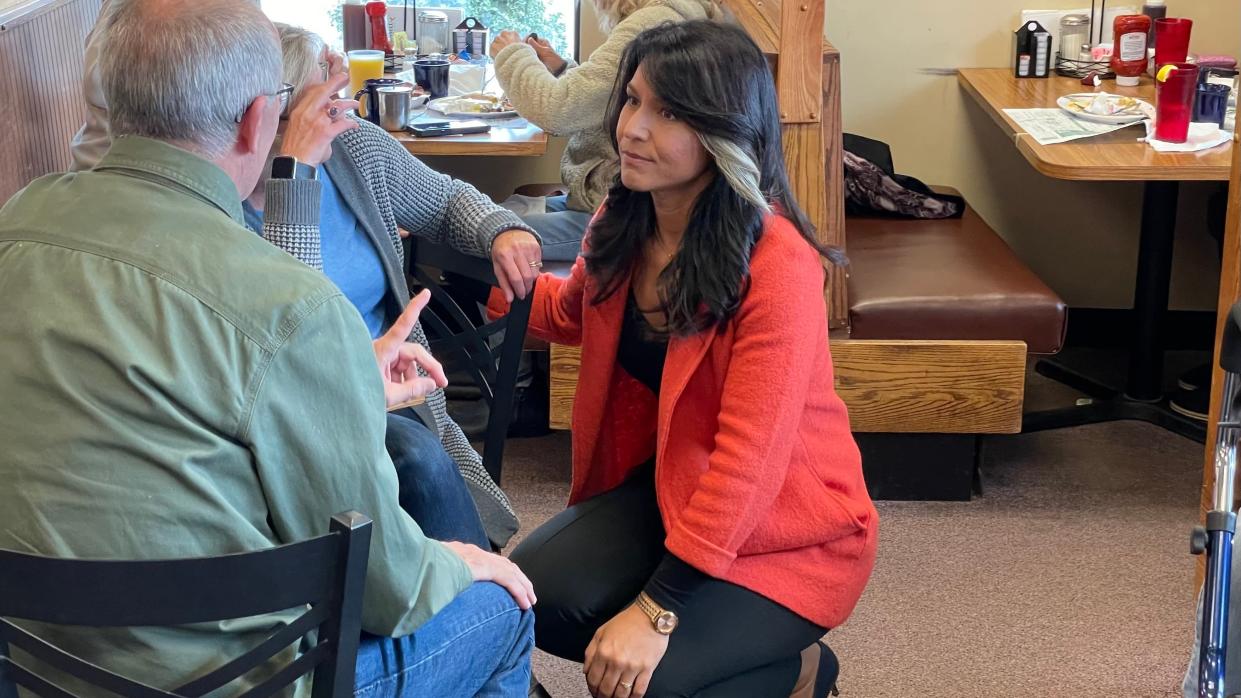 The two-day swing by Bolduc and Gabbard comes on the eve of the first of three debates between the Republican challenger and Hassan.

Bolduc told Fox News he plans at Tuesday's first debate to "show the big differences between me and Senator Hasson and that is that she is 100% behind Joe Biden's agenda which has hurt Granite Staters and Americans. And I do it respectfully. And I do it in a way that really demonstrates that what she's done for Granite Staters has hurt Granite Staters, and that she is not going to change — that it's all about status quo for her. And it's all about change for the better from me, economy spending safety and security of Americans. And I think that's really easy to do, given how she's voted."

Bolduc created a controversy in recent days after he called the disposal of embryos during in vitro fertilization process "a disgusting practice," in a conversation recorded by a Democratic operative and obtained by Vanity Fair.

The Hassan campaign on Friday, in a release, wrote that "Don Bolduc wants to ban IVF treatments — a medical procedure used by countless women seeking to become pregnant."

Asked on Monday by Fox News if he supports a ban, Bolduc stressed, "I fully support Americans' women's ability, family's ability to have children, however that is, and so there shouldn't be."

"My wife is a nurse who works for a law firm, and she screens medical records for in vitro fertilization. Right. So, talking to her, I know what the process is, and I fully support women, families, who are looking to adopt or use science to have children so that they can have families," he added.

And Bolduc charged that "I don't know where she's [Hassan] getting this ban thing from. But she just lies."