PANDEGLANG, Indonesia (Reuters) – A tsunami killed at least 222 people and injured hundreds on the Indonesian islands of Java and Sumatra following an underwater landslide believed to have been caused by the erupting Anak Krakatau volcano, officials said on Sunday.

Hundreds of homes and other buildings were “heavily damaged” when the tsunami struck, almost without warning, along the rim of the Sunda Strait late on Saturday, Sutopo Purwo Nugroho, spokesman for the disaster mitigation agency, said.

It has been a torrid year for the vast archipelago that sits on the Pacific Ring of Fire. Successive earthquakes flattened parts of the tourist island of Lombok in July and August, and a double quake-and-tsunami killed more than 2,000 people on Sulawesi island in September.

As night fell on Sunday, rescue efforts continued but workers and ambulances were finding it difficult to reach affected areas because some roads were blocked by debris from damaged houses, overturned cars and fallen trees.

TV images showed the seconds when the tsunami hit the beach and residential areas in Pandeglang on Java island, dragging with it victims, debris, and large chunks of wood and metal.

Coastal residents reported not seeing or feeling any warning signs on Saturday night, such as receding water or an earthquake, before waves of 2-3 meters (6-10 feet) washed ashore, according to media.

Authorities said a warning siren went off in some areas.

The timing of the tsunami, over the Christmas holiday season, evoked memories of the Indian Ocean tsunami triggered by an earthquake on Dec. 26 in 2004, which killed 226,000 people in 14 countries, including more than 120,000 in Indonesia.

Øystein Lund Andersen, a Norwegian holidaymaker, was in Anyer town with his family when Saturday’s tsunami struck.

“I had to run, as the wave passed the beach and landed 15-20 meters inland. Next wave entered the hotel area where I was staying and downed cars on the road behind it,” he said on Facebook. “Managed to evacuate with my family to higher ground through forest paths and villages, where we are taken care of by the locals.”

Authorities warned residents and tourists in coastal areas around the Sunda Strait to stay away from beaches and a high-tide warning remained in place through until Dec. 25 as officials tried to determine the exact cause of the disaster.

“Those who have evacuated, please do not return yet,” said Rahmat Triyono, an official at the Meteorology, Climatology and Geophysics Agency (BMKG).

President Joko Widodo, who is running for re-election in April, said on Twitter that he had “ordered all relevant government agencies to immediately take emergency response steps, find victims and care for the injured”.

The western coast of Banten province in Java, Indonesia’s most populated island, was the worst-hit area, Nugroho told reporters in Yogyakarta. He also said at least 35 people were reported dead in Lampung in southern Sumatra. 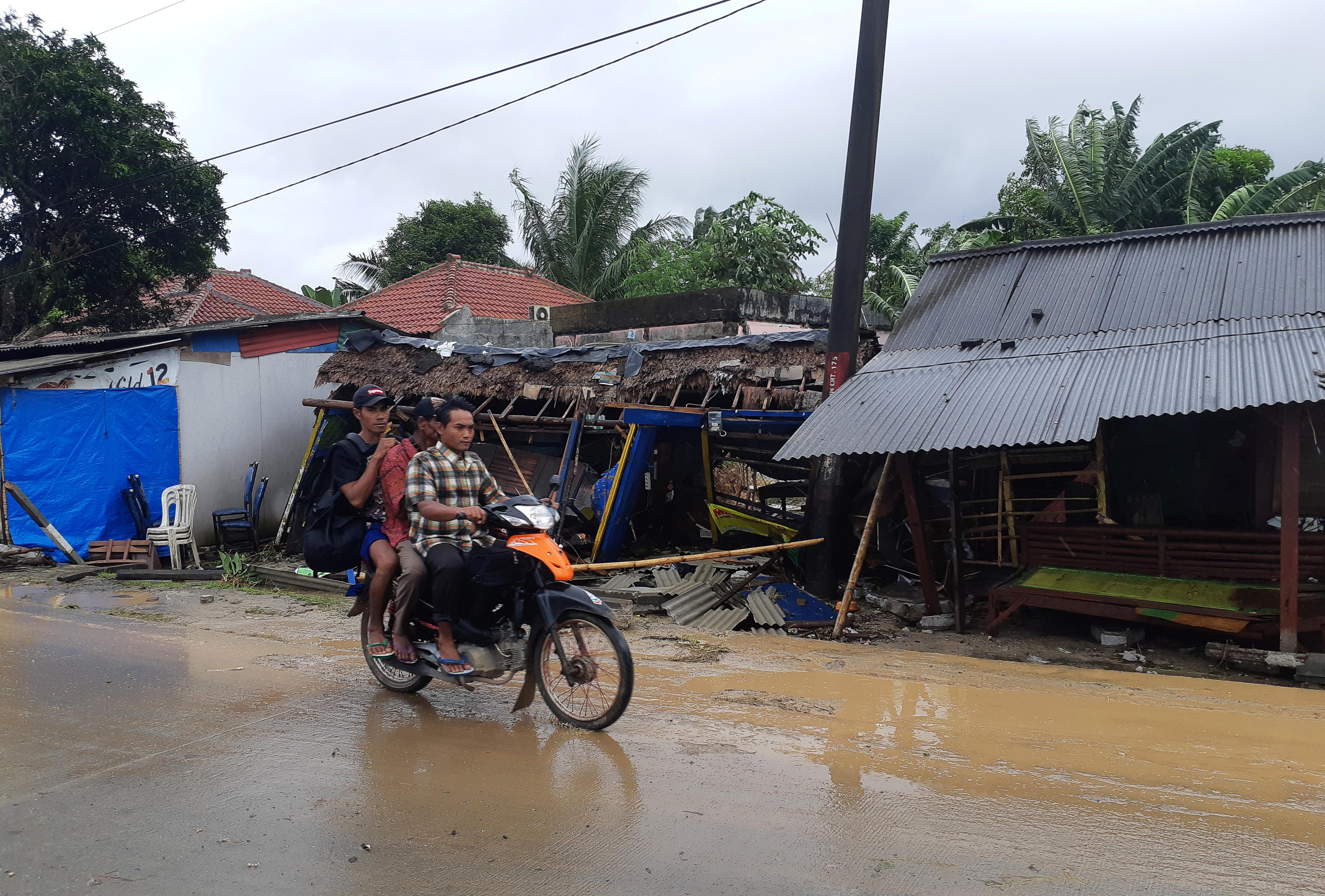 The Red Cross send out equipment and aid from its regional warehouse in Banten including water, tarpaulins, shovels and axes, as well as hygiene kits, it said in a statement.

Television footage showed the seconds when the tsunami washed away an outdoor stage where a local rock band was performing for hundreds of guests at an end-of-year party for state utility company PLN.

Four of the musicians from the band, Seventeen, were killed, along with 29 PLN employees and relatives.

“The water washed away the stage which was located very close to the sea,” the band said in a statement. “The water rose and dragged away everyone at the location. We have lost loved ones, including our bassist and manager … and others are missing.”

Police officers rescued a young boy who was trapped in a car buried under fallen trees and rubble for nearly 12 hours, according to a video of his rescue posted on Twitter by the Indonesian National Police.

The tsunami was caused by “an undersea landslide resulting from volcanic activity on Anak Krakatau” and was exacerbated by abnormally high tide because of the full moon, Nugroho said.

Anak Krakatau, an active volcano roughly halfway between Java and Sumatra, has been spewing ash and lava for months. It erupted again just after 9 p.m. on Saturday and the tsunami struck at around 9.30 p.m., according to BMKG.

Ben van der Pluijm, an earthquake geologist and a professor in the University of Michigan, said the tsunami may have been caused by a “partial collapse” of Anak Krakatau.

“Instability of the slope of an active volcano can create a rock slide that moves a large volume of water, creating local tsunami waves that can be very powerful. This is like suddenly dropping a bag of sand in a tub filled with water,” he said. 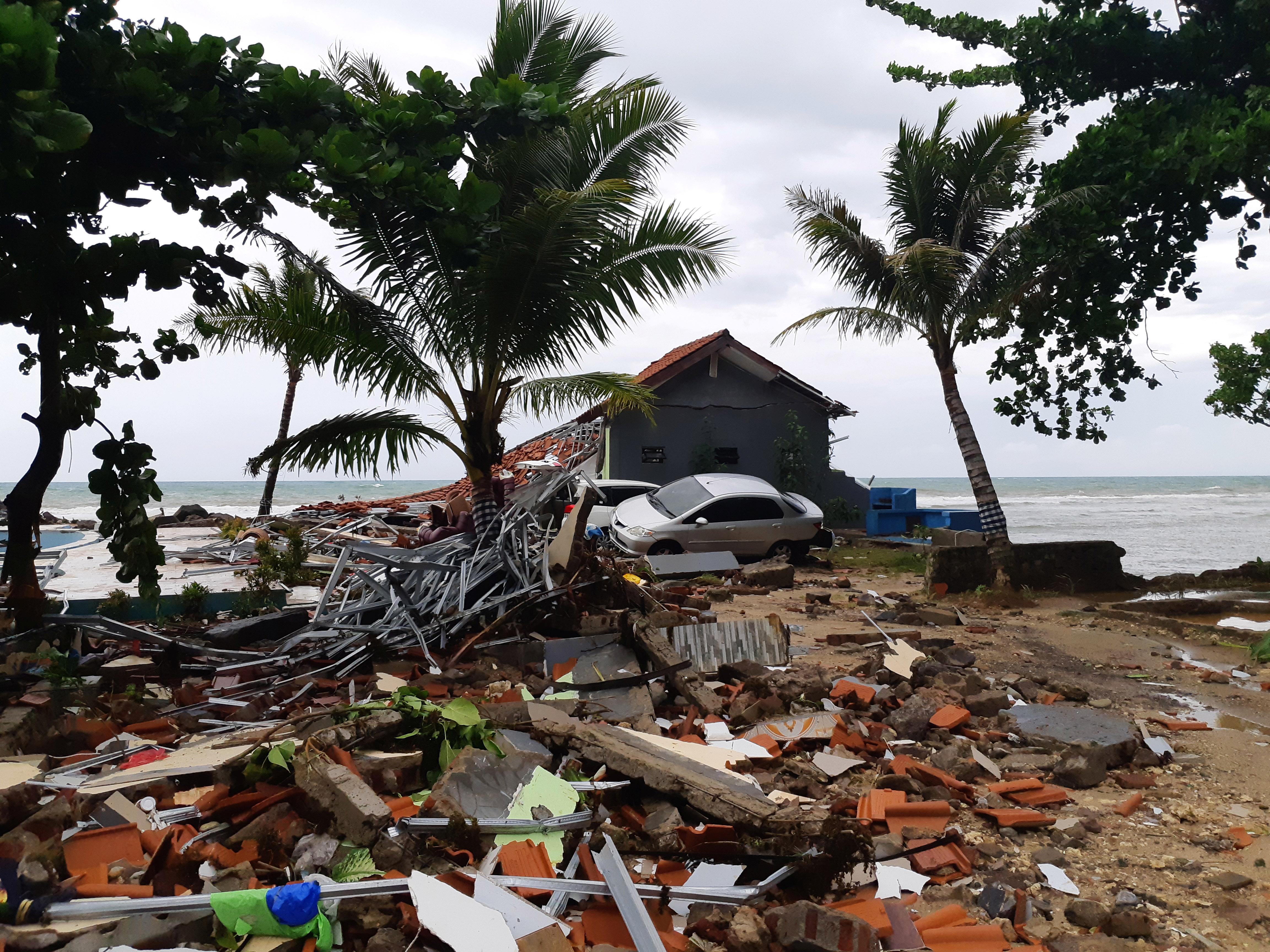 The eruption of Krakatau, previously known as Krakatoa, in 1883 killed more than 36,000 people in a series of tsunamis.

Anak Krakatau, which means child of Krakatau, is the island that emerged from the area once occupied by Krakatau, which was destroyed in 1883. It first appeared in 1927 and has been growing ever since.