Given everywhere we've been over the past four years, there's almost nothing interesting about this week’s Republican National Convention. The race-baiting. The allegations of a rigged election. The apocalyptic vision of an America under the Democrats awash with criminals and no guns to keep them in check. The idea that all that makes life good (especially in the suburbs) is under grave threat. And the insistence that only Donald Trump – "the bodyguard of Western civilisation" – can save the world. We've seen all these moves before.

No, what's interesting is the starkly contrasting approach of Democrat nominee Joe Biden the previous week. Sure, there was some fire and brimstone anti-Trump rhetoric surrounding him from vice-presidential nominee Kamala Harris, and some unusually direct lines of attack from Michelle and Barack Obama. 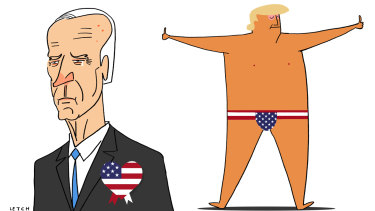 Biden himself presented as a deeply vulnerable, mournful individual who has suffered much in life – referencing the car crash that killed his first wife and their baby daughter. "I know that deep black hole that opens up in your chest," he confessed. "That you feel your whole being is sucked into it. I know how mean and cruel and unfair life can be sometimes." For now at least, he isn't trying to match Trump's aggression and chest-beating. Biden isn't fighting fire with fire. He's laying himself bare. I don't recall anything quite like it.

Perhaps a candidate like Biden doesn't have terribly much choice. He's famously excellent at striking the mournful notes of a eulogy as a kind of forlorn, sensitive overseer of events. He's positively hopeless when he pretends to be an attack dog. Even so, I suspect his approach is only possible because of the utterly unique moment the COVID-19 pandemic has created, and which the Black Lives Matter flashpoint has especially augmented in America.

On both fronts, Biden is speaking to a suffering nation. No doubt it helps him that this suffering is on Trump's watch, and is in no small part thanks to Trump's ineptitude. Trump's biggest political problem is that he doesn't seem to care: that even with 180,000 deaths on his hands, his biggest concern seems to be with his own image. In that context, and by emphasising his own suffering, Biden becomes vividly relatable. The message seems to be: "Your suffering is being ignored. But I feel it deeply because I'm suffering, too". 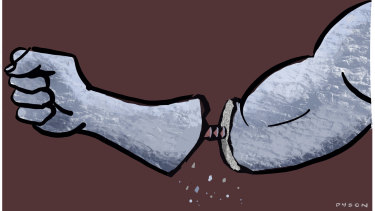 Trump's team probably see this as a genuine vulnerability, given Melania Trump’s speech aimed to rehabilitate him: "Donald will not rest until he has done all he can to take care of everyone impacted with this terrible pandemic." Earlier, she had said, "I know many are anxious and feel helpless. I want you to know you are not alone." But it's telling Melania has to project this, rather than the President. It's just not his style of politics.

Political styles matter. They have moments they suit, and moments they don't. And while there's no doubt Trump's political style – replicated in several countries now – matched a moment of populist anger in 2016, there are signs it might be running aground. 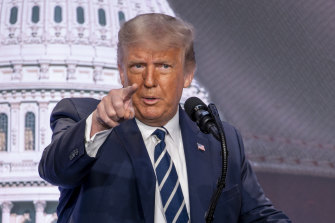 This is because they reacted more immediately and decisively, and locked down earlier than male leaders. But the plot thickens even more when you consider those countries which have arguably responded worst. Trump's America, Bolsonaro’s Brazil, Putin's Russia, Duterte's Philippines. We might crudely say these are among the world's most conspicuously hairy-chested, hyper-masculine leaders.

I don't think this is a coincidence. Strongman politicians pretend they can bend anything to their will: enemy nations, domestic political foes, sectors of society they don't like, scientists and other experts.

Theirs is a politics of ego, domination and control that presumes simply to impose their position on the world. Faced with COVID-19, they're likely to decide they aren't going to be pushed around by some stupid virus and respond as though it's a battle of wills. That was clearest in the extraordinary levels of denial and wilful blindness from Bolsonaro and Trump. Even Boris Johnson had his moments when he boasted of shaking hands with COVID-19 patients, only to wind up nearly deathly ill himself.

More successful leaders, and especially the women noted in the study, practise a more sober, humble politics that is prepared to accept reality rather than be affronted by it. Less constrained by ego, they are comfortable taking expert advice. The irony is this allowed such leaders to be genuinely decisive while politics' self-styled men of action have found themselves paralysed, failing by their near total inaction.

Right now, this particular style of emperor has no clothes. He fails on two fronts: first in the sheer weight of death he facilitates, but, second, he cannot even comfort or console because that requires him to acknowledge a pain he isn't preventing, and his denial will never allow that.

In this way, the greatest political weapon of such leaders – that ability to channel the emotion of the disillusioned – evaporates. There's plenty of emotion going around, alright. Just not one they can acknowledge, much less reflect.

This context makes Biden's approach possible. Of course, it's entirely possible it crashes in November, heralding four more years of Trump or whatever it is Trump seems to be earmarking. Perhaps the veneer of hyper-masculine politics can be repaired by then, and perhaps the moment of profound sorrow that facilitates Biden's politics of vulnerability will prove fleeting. The mere fact that Biden's trying it on says something extraordinary is happening. And if he wins, it might give birth to a whole new political fashion.

Waleed Aly is a regular columnist.

The most important news, analysis and insights delivered to your inbox at the start and end of each day. Sign up to The Sydney Morning Herald’s newsletter here,  The Age’s newsletter here, Brisbane Times‘ here and WAtoday’s here.