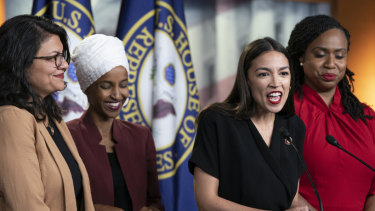 Alexandria Ocasio-Cortez speaks at a news conference with, from left, Rashida Tlaib, Ilhan Omar and Ayanna Pressley. “This is the agenda of white nationalists … this is his plan to pit us against one another,” said Ms Omar.Credit:AP

Trump never quite put this theory in writing. But it guides his behaviour all the same. That's the reason he embraced and promoted the deranged conspiracy theory about President Barack Obama’s birthplace – a black President, in Trump's mind, must be illegitimate somehow. And it's the reason, as President, he wants fewer immigrants from “shithole” countries and more from northern European nations like Norway. It's less a practical alternative – there aren't many Norwegian immigrants to the United States – than it is an expression of his racism.

Trump's theory of citizenship helps explain some of his unusual behaviour, like when he praised a largely foreign-born but nearly all-white hockey team for being "incredible patriots". And it drove his most recent outburst, a racist attack on four Democratic congresswomen of colour, Alexandria Ocasio-Cortez of New York, Ilhan Omar of Minnesota, Rashida Tlaib of Michigan and Ayanna Pressley of Massachusetts.

"So interesting to see 'Progressive' Democrat Congresswomen, who originally came from countries whose governments are a complete and total catastrophe, the worst, most corrupt and inept anywhere in the world (if they even have a functioning government at all)," Trump said on Twitter. "Why don't they go back and help fix the totally broken and crime infested places from which they came. Then come back and show us how it is done."

Trump continued with a pointed reference to their dispute with the House Democratic leadership. "These places need your help badly, you can't leave fast enough. I'm sure that Nancy Pelosi would be very happy to quickly work out free travel arrangements!"

Three of the four congresswomen were born in the United States. One came to the country as a child. They are all US citizens. There is no place to "go back" to. But Trump does not see it this way. He sees four women of colour – unworthy of any respect, dignity or fair consideration. It does not matter to him that they are the elected representatives of millions of Americans. He sees non-whites and he just knows they don't belong.

It's tempting in this situation to just condemn Trump and leave it there. But that's a mistake. With this latest tirade, Trump hasn't only indulged his racism, he has also usefully – if unintentionally – stripped some racial euphemism from the public discourse. His attacks on the congresswomen stem from the same source as his failed attempt to place a citizenship question on the census.

Ludicrously, the Trump administration told the US Supreme Court that this information was needed to better enforce the Voting Rights Act. But the true aim, as the files of the man who devised the strategy proved, was a drive to preserve a majority-white electorate by giving state Republican lawmakers the tools and the data they need to gerrymander non-citizens and non-whites out of fair representation and fair apportionment. The underlying theory is the same in both cases. If you're white, you are entitled to full political equality. If you're not, you aren't.

Much of Trump's agenda rests on this idea that the boundaries of rights and citizenship are conterminous with race. Those within Trump's boundaries enjoy the fruits of US freedom, while those outside them face the full force of US repression. White European immigrants like the first lady, Melania Trump, are welcomed; dark-skinned migrants from Latin America are put into cages and camps.

It is important to say that none of this is new to American life. Americans as early as the founding generation believed whiteness was a prerequisite for the exercise of republican virtue. Before the Civil War, there was a decades-long movement to send free and freed blacks back to Africa based on the theory that black people were unfit for and incompatible with democratic life. America's most restrictive immigration laws were rooted in the idea this was, as the popular 19th-century phrase had it, a "white man's country", inherently threatened by the presence of non-whites and non-Anglo-Saxons, not to mention women.

Trump, in other words, isn't an innovator. His theory of citizenship is an old one, brought back from the margins of US politics and expressed in his crude, demagogic style. And it has found a comfortable place in a Republican Party that elevates its narrow, shrinking base as the only authentic United States and would rather restrict the electorate than persuade new voters.

With that said, what's more striking than the president's blood-and-soil racism is how Democratic Party elites – or at least one group of them – are playing with similar assumptions. No, they haven't held out the white working property owner as the only citizen of value, but they're obsessed with winning that voter to their side – convinced that this group is the path to victory. It helps explain the current feud between Speaker Nancy Pelosi and the four congresswomen, with House Democratic leaders attacking progressives on behalf of moderates in the caucus – some of which represent districts Trump won in 2016, but most of whom represent districts that gave Democrats the majority last November.

Indeed, it is instructive – and frankly disturbing – that top Democrats leaked a poll to news website Axios showing broad dissatisfaction with Ocasio-Cortez and Omar. Not from the entire public or Democratic voters, but from "1003 likely general-election voters who are white and have two years or less of college education".

Trump wants to make the United States a white country, where the possibility of full citizenship is tied to race. Most Republicans are either silent or supportive. The Democratic Party has the opportunity to oppose this vision with all the moral force that comes with representing a diverse, multiracial coalition. But even as they condemn the president – "I reject @realDonaldTrump's xenophobic comments meant to divide our nation," Nancy Pelosi said on Twitter – there are still too few Democrats who are up for the challenge and too many who would rather go after those who embody that other United States.