Washington: US President Donald Trump is on track to win a slew of battleground states, keeping alive his hopes of again stunning the world by winning a second term in the White House.

Associated Press declared he had won Florida at 4.35pm on Wednesday (AEDT), after claiming Ohio earlier. He was well placed to win Texas, Georgia and North Carolina, killing off Democrats’ hopes of achieving a definitive election-night repudiation of his time in office. 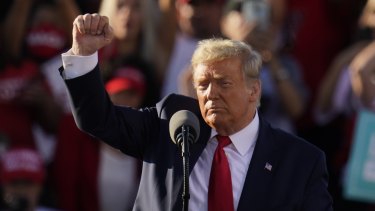 But Democratic nominee Joe Biden retains a plausible path to victory after posting a big early lead in Arizona, and with a majority of votes still to be counted in the “rust belt” states of Wisconsin, Michigan and Pennsylvania.

In Georgia, significant numbers of early votes remain outstanding in Atlanta and the surrounding suburbs, offering Democrats hope they could narrow the gap there.

Addressing supporters in Delaware about 4.45pm on Wednesday (AEDT), Biden urged Democrats to “keep the faith” as votes are counted over coming days. “We are feeling good about where we are,” Biden said. “We are going to win this.”

He added: “We are feeling real good about Wisconsin and Michigan. And, by the way, it is going to take time to count the votes. We are going to win Pennsylvania!”

Goaded by Biden's speech, Trump immediately tweeted that he would be making a statement: “A big WIN!”

The President alluded to his earlier vow to send lawyers in to challenge late-counted votes. “We are up BIG,” he tweeted, “but they are trying to STEAL the election. We will never let them do it. Votes cannot be cast after the Poles are closed!”

Even without all the votes counted, it was clear that pollsters had underestimated Trump’s level of support in several key states – just as they did in 2016.

As of midnight local time in the United States, Trump was ahead by five points in Texas, 10 points in Georgia and 1.5 points in North Carolina.

Biden is ahead by nine points in Arizona, a traditionally Republican state that has undergone rapid demographic changes in recent years. 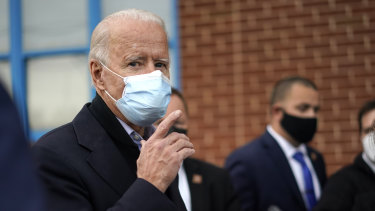 Crucial to Trump’s victory in Florida was his improved performance in the Miami area, which has a big concentration of Cuban-American and Venezuelan-American voters.

Trump’s efforts to paint Democrats as socialists proved effective with these voters, many of whom fled dictatorial left-wing regimes.

Exit polls showed Trump made big gains with Latino voters in several states from his performance in 2016.

Biden was on track to win about 54 per cent of the votes in Miami-Dade County, down from 63 per cent for Hillary Clinton in 2016. It was essential for Democrats to run up a big margin in Miami-Dade in order to offset losses in other parts of the state.

As he did four years ago, Trump ran up big margins in the conservative Florida panhandle region.

Despite heightened tensions – national guards have been put on standby in case of violence – election day in America has so far been mostly trouble-free, with minor problems such as polling booth delays and disinformation campaigns quickly dealt with by state authorities.

In an interview on Fox News earlier in the day, Trump declared he had a “solid chance” of winning a second term.

“This reminds me, I hope it reminds me, of four years ago,” he said. “Tremendous changes have taken place over the last week.”

While campaigning in Pennsylvania, Biden said he felt good about the result, but added: “it ain't over till it's over".

Understand the election result and its aftermath with expert analysis from US correspondent Matthew Knott. Sign up to The Sydney Morning Herald‘s newsletter here, The Age‘s here, Brisbane Times‘ here and WAtoday‘s here.