Washington:  US President Donald Trump said on Saturday the United States was asking European allies to "take back over 800" Islamic State fighters captured in Syria and put them on trial.

"The Caliphate is ready to fall," he said in a Tweet. "The alternative is not a good one in that we will be forced to release them…"

US-backed fighters in Syria are  poised to capture Islamic State's last, tiny enclave on the Euphrates, the battle commander said on Saturday, bringing its self-declared caliphate to the brink of total defeat. 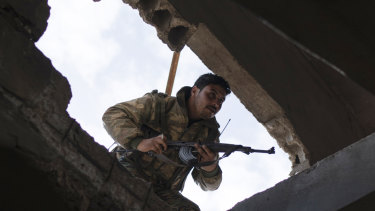 A US-backed Syrian Democratic Forces (SDF) fighter enters a building as fight against Islamic State militants continues in the village of Baghouz, Syria, on Saturday.Credit:AP

Jiya Furat said on Saturday the Syrian Democratic Forces had cornered the remaining militants in a neighbourhood of Baghouz village near the Iraqi border, under fire from all sides.

"In the coming few days, in a very short time, we will spread the good tidings to the world of the military end of Daesh," he said, using the Arabic acronym for Islamic State.

He was speaking after Trump said on Friday there would be "great announcements" about Syria over the next 24 hours. 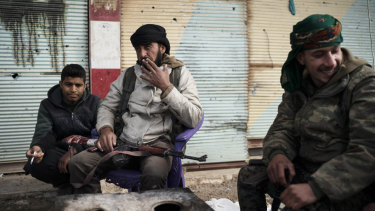 US-backed Syrian Democratic Forces fighters sit outside a building as the fight against Islamic State militants continues in the village of Baghouz, Syria, on Saturday.Credit:AP

Trump has sworn to pull US forces from Syria after IS's territorial defeat, raising questions over the fate of Washington's Kurdish allies and Turkish involvement in north-east Syria.

Meanwhile, the leader of Lebanon's militant Hezbollah group has blasted Trump ahead of his expected declaration of victory against IS.

Hassan Nasrallah said on Saturday that had it not been for the US, Syrian government forces, supported by Hezbollah fighters on the ground, would have defeated the extremists a long time ago.

Syrian forces captured all areas west of the Euphrates River from IS by late 2017, while on the eastern side US-backed Kurdish-led fighters are expected to conclude their battle against IS in the coming days.

Nasrallah said the victory declaration against IS will be made by "the biggest hypocrite in the world. American President Donald Trump".