The past four and a bit years have been a white-knuckled ride for former prime minister Tony Abbott observing Donald Trump’s performance in the White House. After all, Abbott initially believed the presidential hopeful was “uniquely under-qualified” for the Oval Office ahead of the 2016 election. But that all changed during the term with Abbott eventually praising Trump’s performance and ability to deliver on promises. 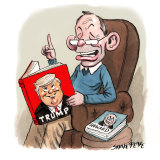 “Much to the surprise of many … indeed, somewhat to my own surprise … I think he’s been quite a success: his style sometimes grates, but he’s been a very good president,” the former PM told US conservatives in early 2020 at a Heritage Foundation event.

But it appears that even Abbott was underwhelmed by Trump’s recklessness in the dying days of his presidency, including calling for his supporters to storm Washington DC’s Capitol Hill in the riots, which ultimately left five people dead. In an interview to be released next week as part of a new online series produced by the right-aligned Institute of Public Affairs and conservative outlet The Spectator, the former MP doesn’t mince his words on the former president.

“He has not behaved well since the election … I suppose he was always going to be a sore loser [and] you don’t have to like losing, but you have got to respect the people’s verdict,” he said. “And for all the things that might have looked a bit fishy on the [election] night, no court anywhere in the United States was convinced that there was anything fundamentally wrong.”

But an Australian example shows history could eventually rehabilitate Trump’s reputation, he says. “While he might have been a sore loser, he was in many respects quite a good president, he … had great political integrity,” he said. “I suspect that history will be kinder to him than his contemporaries are being right now … At the time John Howard wasn’t exactly popular with people who now actually regard him as a statesman.”

Guess that’s one way of looking at it.

Amazon wheeled out its Australian video boss Hushidar Kharas in Melbourne on Tuesday for the launch of the highly-anticipated behind-the-curtain AFL documentary, Making Their Mark.

The doco charts the AFL’s experience during 2020 as it grapples to keep the competition running amid the COVID-19 pandemic and its shift to a Gold Coast hub.

It also offers a close-up of high-profile players including Carlton’s Eddie Betts and West Coast’s Nic Naitanui as they adjust to the alien conditions. Of course, the launch is all part of Amazon’s plan to nab more eyeballs for its local video arm by appealing to the most tried and tested Victorian tradition there is: AFL.

And Kharas was open about the strategy to a room at Marvel Stadium filled with AFL heavyweights and media, calling the launch Amazon’s most important foray into local programming yet.

Marvel will be allowed to host a crowd of only 50 per cent of its capacity when it hosts likely cellar-dwellers Essendon and Hawthorn next Saturday. We questioned whether an even more stringent attendance cap was in place at the Amazon launch, which was sparsely-attended.

Richmond chief executive Brendon Gale and president Peggy O’Neal were in attendance, along with Carlton goal-sneak Betts and documentary directors Gil Marsden and Luke Tunnecliffe, from Eddie McGuire’s JAM TV. Too bad AFL boss Gillon McLachlan was a no show, with the league represented by its digital boss Sarah Wyse, who was slightly bummed by the turnout.

“I thought this was going to be a party … damn you COVID,” she said.

Transurban has its work cut out trying to convince the state that extending the CityLink toll until 2045 to pay for the West Gate Tunnel Project isn’t daylight robbery. But they’ve now got an experienced spinner in house to massage the media message and perhaps improve public perception of the company.

New communications director Simon Dowding started this month. He knows how to handle a tough job. The experienced communications professional and former Herald Sun journo has spent the past seven years at big tobacco seller Philip Morris, where he was eventually promoted from his desk in Melbourne all the way to the company headquarters in Switzerland where he became the company’s senior manager of global communications.

Already, he’s got a packed issues list. The West Gate project is running years late and about $3 billion over budget. Presumably the Andrews government would more quickly wind back cigarette rules than take up another offer similar to Transurban’s unsolicited proposal to build the multibillion-dollar tunnel.

According to Dowding’s LinkedIn page, in Switzerland, he led Phillip Morris’ “media and scientific engagement programs”. Unless he develops a science to print $3 billion, he’s unlikely to easily fulfil his remit.

He will spend a year at the firm on a maternity leave replacement.