Trump confirms Chief of Staff John Kelly will leave the White House ‘by the end of the year’ and thanks ‘the great guy’ for his service, saying his replacement will be announced soon

President Donald Trump has said that his chief of staff, John Kelly, will be ‘leaving at the end of the year’.

Speaking to reporters on Saturday as he was leaving the White House to attend the Army-Navy football game in Philadelphia, Trump said an announcement on Kelly’s replacement would come in the next few days.

It follows reports on Friday that Trump had stopped speaking to Kelly, the latest development in a relationship that frayed over retired Marine general Kelly’s struggles to bring order to the West Wing. 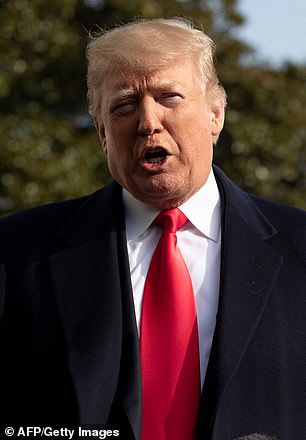 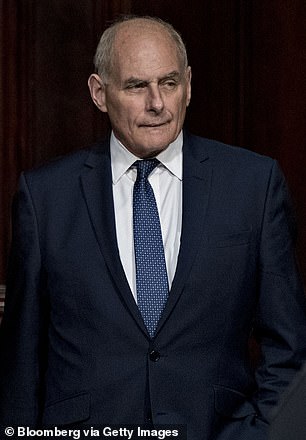 Speaking to reporters on Saturday as he was leaving the White House to attend the Army-Navy football game in Philadelphia, Trump said that Kelly (right) would be out by the end of the year

Kelly’s future in the Trump administration had been uncertain for nearly a year, ever since a DailyMail.com report in February revealed domestic abuse allegations against former White House secretary Rob Porter, and raised questions about Kelly’s handling of the affair.

The West Wing shake-up comes as Trump is anticipating the challenge of governing after Democrats take control of the House in January, and as he gears up for his re-election campaign in 2020.

Kelly had been credited with imposing order on a chaotic West Wing after his arrival in June 2017 from his post as homeland security secretary. But his iron first also alienated some longtime Trump allies, and he grew increasingly isolated, with an increasingly diminished role.

Known through the West Wing as “the chief” or “the general,” the retired Marine Corps four-star general was tapped by Trump to replace Reince Priebus and try to normalize a White House riven by infighting and competing power bases.

He entered a West Wing in chaos, firing short-tenured communications director Anthony Scaramucci in his first day as chief of staff. 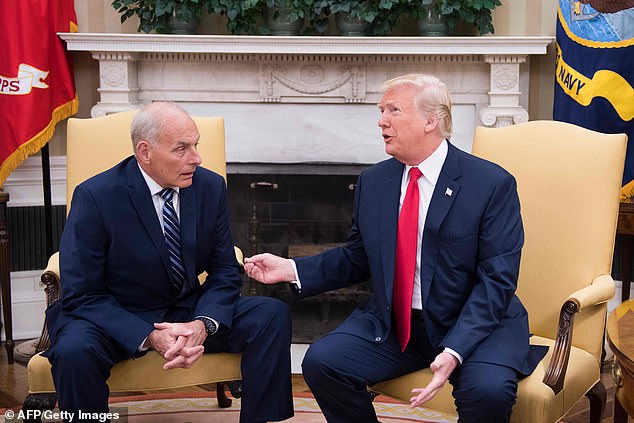 Trump is seen with Kelly in his first day on the job as chief of staff on July 31, 2017. Kelly replaced Reince Priebus in the role as was initially expected to bring order to the West Wing

Kelly had early successes, including ending an open-door Oval Office policy that that had been compared to New York’s Grand Central Station and instituting a more rigorous policy process to try to prevent staffers from going directly to Trump.

But those efforts also miffed the president and some of his most influential outside allies, who had grown accustomed to unimpeded access.

Kelly’s handling of domestic violence accusations against Porter also caused consternation, especially among lower-level White House staffers, who believed Kelly had lied to them about when he found out about the allegations.

Kelly, too, made no secret of the trials of his job, and often joked about how working for Trump was harder than anything he’d done before, including on the battlefield.

In private, Kelly, whom friends said took the job out of a sense of duty to his country, cast himself as safeguarding the public from an impulsive and mercurial president.

Reports of those conversations infuriated the president, who is especially sensitive of attacks on his competence and perceptions he is being managed. 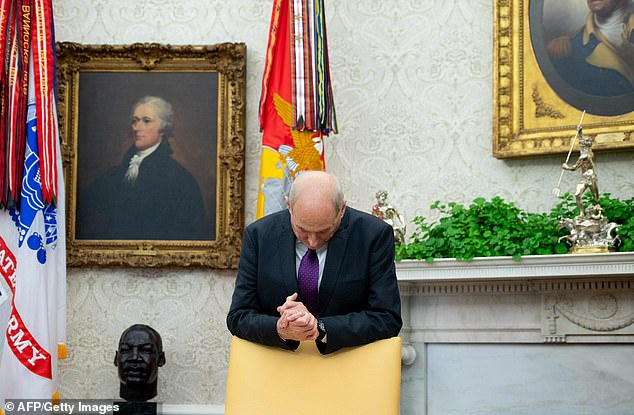 Kelly is seen in the Oval Office last month. His relationship with Trump had reportedly grown so frayed that in recent days the two men were no longer on speaking terms

In July, Trump tried to quell rumors of Kelly’s departure, making a point of announcing that he had asked him to stay on as chief of staff through 2020.

But in recent months, reports suggested that Kelly’s role had become increasingly diminished, with key decisions being made without the chief of staff in the room.

After Trump announced Friday he was picking a new U.S. attorney general and a new ambassador to the U.N., Kelly’s departure seemed all but certain.

Still, Trump’s casual revelation of the shakeup on the White House lawn, as he walked to Marine One, came as a shock to observers who expected a formal announcement.

Nick Ayers, Vice President Mike Pence’s chief of staff, is widely believed to be Trump’s top pick for a replacement. 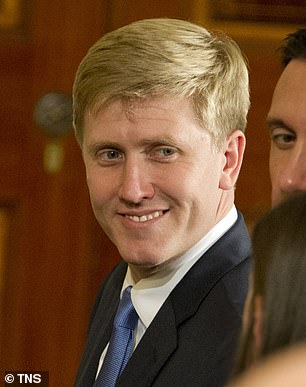 Ayers, 36, would be the youngest chief of staff since the Carter administration

Trump and Ayers were working out terms under which Ayers would fill the role and the time commitment he would make, a White House official said.

Trump wants his next chief of staff to agree to hold the job through the 2020 election.

Ayers, who has young triplets, had long planned to leave the administration at the end of the year, but he has agreed to serve in an interim basis through the spring of 2019.

Ayers also earned the backing of Ivanka Trump and Jared Kushner, the president’s daughter and son-in-law and senior advisers, for taking on the new role, White House officials said.

Ayers, 36, would be the youngest chief of staff since 34-year-old Hamilton Jordan served under Jimmy Carter. Kelly is 68.

The latest White House shakeup inspired some Trump critics to dig up an old tweet from 2012.

In it, Trump wrote: ‘3 Chief of Staffs in less than 3 years of being President: Part of the reason why @BarackObama can’t manage to pass his agenda.’