President Donald Trump said on Friday he is off all the medication he’s been taking to treat his COVID-19, telling talk radio host Rush Limbaugh he feels ‘perfect.’

Trump called into Limbaugh’s show for a ‘radio rally’ with the popular conservative radio star while he remains quarantined inside the White House because of his bout with the coronavirus.

‘I feel perfect,’ the president said at the top of his two hour interview.

‘I mean I feel better now than I did two weeks ago. It’s crazy and I recovered immediately – almost immediately,’ he said.

He also said he was no longer taking any medication for COVID, a change from what he said the day before.

Trump said Thursday he was off all treatment except for dexamethasone, a powerful steroid which can cause insomnia, mania, mood swings, and rage. It has shown promise for treating patients with a severe case of COVID-19 who are getting supplemental oxygen.

Some doctors and Speaker Nancy Pelosi have expressed concern the steroid could affect the president’s mental state given its side effects, citing some erratic behavior from Trump, including a storm of tweets posted over two days and announcing on Twitter he was pulling out of the COVID relief talks, which sent the stock market tanking.

Now Trump said he’s no longer taking any medication for his coronavirus.

‘I’m not taking anything you know. I’m off any regimen that they gave me,’ he said.

He also claimed that an experimental anti-viral drug he took from Regeneron was a ‘cure’ for the coronavirus.

‘This is stuff that is so good. It just wiped out the virus and wiped it out,’ he claimed.

‘I’m telling you this is a, a total game changer. It’s so good,’ he said. ‘This is the greatest of them all if this works out and I’m very sure it’s going to.’ 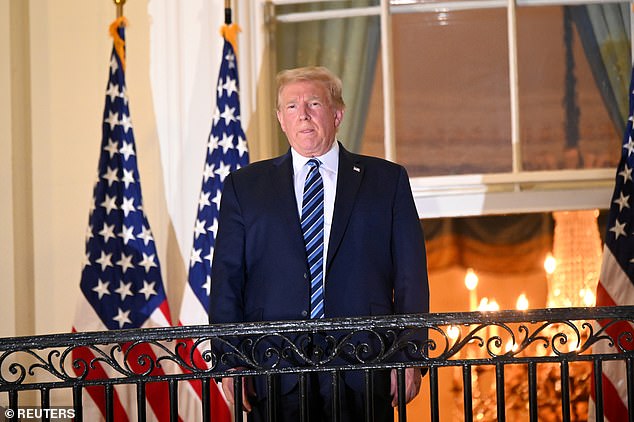 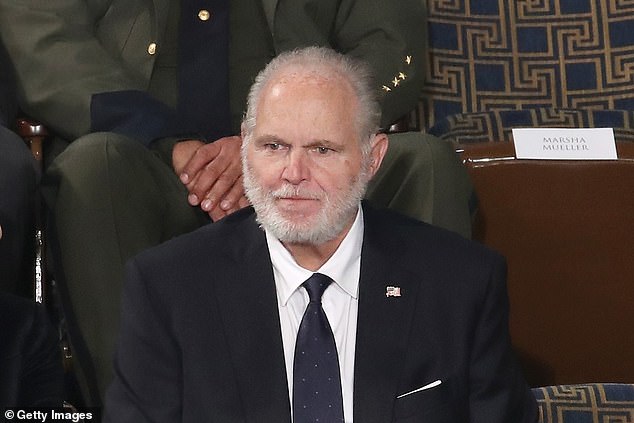 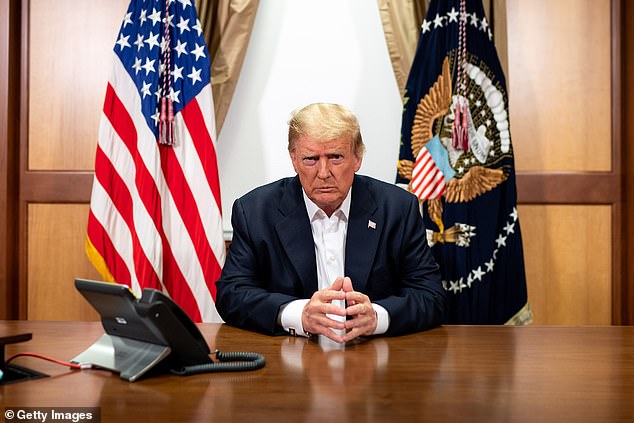 In his interview with Rush Limbaugh, President Trump claimed an experimental anti-viral drug he took from Regeneron was a ‘cure’ for the coronavirus

Trump is just one of 10 people who received the drug, which is still in the experimental phase, and is intended to boost antibodies to fight the infection.

What does Regeneron’s antibody cocktail do?

REGN-COV2 is a combination of two lab-made versions of antibodies that help block the coronavirus from entering cells.

The hope is that the treatment drives down viral load, keeping it from overrunning the body and sending the immune system haywire, and preventing the infection from becoming severe.

REGN-COV2 is still in early trial phases, but the first data from its clinical trial found that it dramatically lowered viral load within a week and cut recovery time in half in patients that weren’t sick enough to be hospitalized.

Regeneron has not yet studied the drug in severely ill patients.

The main concern is these types of treatment occasionally trigger ‘antibody-dependent enhancement,’ which means the intended therapeutic actually helps the virus invade cells.

So far, the trials don’t suggest that REGN-COV2 is causing this phenomenon.

His treatment regime included the dexamethasone, the experimental anti-viral drug from Regeneron, and the antiviral drug remdesivir.

His doctor said Wednesday that Trump has COVID antibodies in his system but that could be the result of the remdesivir. Anti virals work by injecting antibodies into the patient’s system to help the person fight the disease. It’s unclear what level of the drug Trump has received.

The White House announced seven days ago Trump tested positive for the disease. He left the hospital four days ago.

The president has been trying to project a picture of health after his diagnosis and as he trails Joe Biden in the polls with Election Day less than a month away.

Meanwhile, the White House said it hasn’t revealed the last time Trump tested negative for COVID because Trump didn’t sign away his privacy rights when he became president.

Any medical personnel treating any patient is prohibited by federal law from disclosing the person’s personal health information without consent under the Health Insurance Portability and Accountability Act, also known as HIPAA.

Dr. Sean Conley, the president’s personal physician who has been giving updates on Trump during his COVID treatment, notes he releases any information about the president’s condition with his patient’s approval.

‘I release the following information with the permission of President Donald J. Trump,’ is at the top of every memo Conley sends out on the president’s health.

Conley released Trump’s vital signs for the first time on Thursday since he became infected, showing a pulse, blood pressure, and blood oxygen level all within normal ranges.

Conley also stated that Trump’s medical team felt that he would be safe to return to public engagements by Saturday.

Most scientists think that viral shedding continues for about 10 days after symptoms start in mild to moderate cases, according to the Centers for Disease Control and Prevention.

Soon after Conley’s memo was released, Trump’s campaign manager Bill Stepien issued a statement citing it and demanded that the Commission on Presidential Debates reverse its decision earlier in the day to hold next week’s presidential debate virtually.

Stepien, who himself tested positive for COVID-19 last week, said that Conley’s note confirms that Trump will be ready for public engagements ‘five full days before the originally scheduled debate in Miami on October 15.’

‘There is therefore no medical reason why the Commission on Presidential Debates should shift the debate to a virtual setting,’ he added, referring to the commission’s ruling earlier in the day.

‘The commission must stop protecting Joe Biden from this in-person debate and allow the event to proceed as it was agreed to months ago,’ Stepien said, calling it an ‘obvious attempt to shield Biden from another shellacking like he got two weeks ago in Cleveland.’

The chair of the Commission on Presidential Debates said it is not reconsidering shifting the second debate from virtual back to in-person, despite Stepien’s request.

CPD Chair Frank Fahrenkopf said late Thursday that the nonpartisan group’s decision was not going to be reversed. That means the second debate is probably not going to happen at all, after Trump said he would refuse to participate in a virtual debate.

Fahrenkopf says the group wanted to ‘protect the health and safety of all involved’ and that the decision was guided by the advice of the Cleveland Clinic, its heath partner for the 2020 debates.

Trump was first diagnosed with COVID-19 last Thursday, and was moved to Walter Reed Medical Center on Friday before returning to the White House on Monday evening.

‘Since returning home, his physical exam has remained stable and devoid of any indications to suggested progression of illness,’ Conley said in a memo released by the White House on Thursday night.

‘Saturday will be day 10 since Thursday’s diagnosis, and based on the trajectory of advanced diagnostics the team has been conducting, I fully anticipate the President’s safe return to public engagements at that time.’

The memo showed Trump’s resting pulse was 69 beats per minute, which is considered a good rate for his age.

His blood pressure of 127/81 mm Hg is slightly elevated over normal levels, but does not qualify a hypertensive.

Conley said that Trump’s breathing rate was normal, and that his blood oxygen level was 96 to 98 percent without supplemental oxygen, which is well within the normal range.

Curiously, the memo did not include Trump’s body temperature. Last week, Trump reportedly spiked a fever, and his blood oxygen level dropped alarmingly, leading to his transfer to Walter Reed.

The memo also did not say whether Trump had tested negative for COVID-19.

In the interview with Fox News’ Sean Hannity on Thursday night, Trump said that he had not been tested for coronavirus because there was ‘no reason yet’ but that he would probably get a test on Friday.

He also said he plans to hold a rally in Florida this weekend and one in Pennsylvania too.

Trump added that he was considering a second rally in Pennsylvania for Sunday night. He did not specify exact locations for the planned events.

White House press secretary Kayleigh McEnany told Fox News on Friday morning those dates could be logistically tough but it was a decision for the campaign.

‘Logistically, whether tomorrow is possible, it would be tough and be a decision for the campaign, but logistically, we’re just trying to keep up with the president who’s ready to go and ready to be out there as soon as he gets the OK from his doctor,’ she said.

She also noted that Conley told her the president wouldn’t be out in public until he was no longer contagious.

‘He assured me that there are medical tests underway that will ensure that when the president’s back out there, he will not be able to transmit the virus,’ McEnany said.