Washington: US President Donald Trump challenged US telecommunications companies on Thursday to boost their efforts to build advanced networks and said leadership should come from competition, not by blocking competitors. 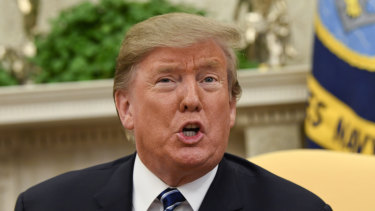 "American companies must step up their efforts, or get left behind," Trump tweeted. "There is no reason that we should be lagging behind on something that is so obviously the future."

The worldwide mobile industry is racing to deploy advanced 5G networks that promise faster connections, allowing uses such as autonomous vehicles and remote surgery. China has a narrow lead over the US and South Korea, according to research commissioned by CTIA, a Washington-based trade group for mobile carriers.

"I want the United States to win through competition, not by blocking out currently more advanced technologies," Trump said in morning tweets.

Shenzhen-based Huawei Technologies Co. is pushing to take a global leadership position in 5G, but many American officials suspect the company's products could be used by Beijing to spy on Western governments and companies. 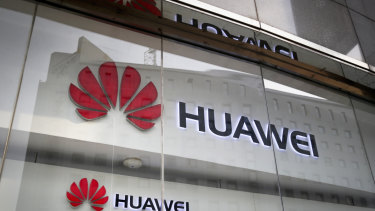 Huawei has made great strides in telecommunications gear, worrying the US. Credit:AP

The Trump administration is pressuring allies to keep Huawei gear out of their telecommunications networks, and Congress barred government agencies from buying the provider's gear.

The White House didn't immediately respond to a request for more information.

Trump's tweets came just a few hours after the Fox Business Network aired an interview with Secretary of State Michael Pompeo, in which host Maria Bartiromo pressed the top US diplomat on whether the administration wants to restrict the use of equipment from Huawei.

"They are creating a real risk for these countries and their systems — the security of their people," Pompeo told Bartiromo. "Europeans care deeply about their privacy. The risk to privacy from this technology is very, very real, and we're out sharing this information."

Pompeo went on to say that a government's reliance on Huawei's 5G technology could mean the US will reconsider having an embassy or American military outpost in the country, saying it is possible "we won't be able to work alongside them."

Huawei founder Ren Zhengfei, in an interview with CBS News on Thursday, says the US is wrong to treat 5G as "at atomic bomb" and said his company will be rolling out "new equipment that is suitable for the United States."

Nevertheless, the Trump administration is said to be preparing an executive order that could significantly restrict Chinese state-owned telecom companies such as Huawei from operating in the US over national security concerns.

"We share the president's commitment to leading the world in next-generation 5G wireless," CTIA said in an emailed statement Thursday. "With the administration's continued backing, the US wireless industry can bring more robust 5G networks to more communities faster."