President Donald Trump has lashed out at the Food and Drug Administration, accusing the agency of attempting to delay approval for coronavirus vaccines and treatments until after the presidential election.

‘The deep state, or whoever, over at the FDA is making it very difficult for drug companies to get people in order to test the vaccines and therapeutics,’ Trump tweeted on Saturday from the White House.

‘Obviously, they are hoping to delay the answer until after November 3rd. Must focus on speed, and saving lives!’ the president continued.

Trump went on to tag FDA Commissioner Stephen Hahn, who has repeatedly vowed that the agency is committed to speeding safe and effective interventions to approval, guided by science and not political consideration. 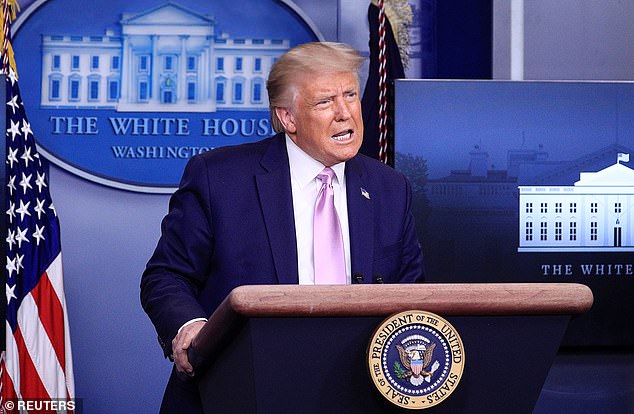 President Donald Trump has lashed out at the Food and Drug Administration, accusing the agency of attempting to delay approval for coronavirus vaccines 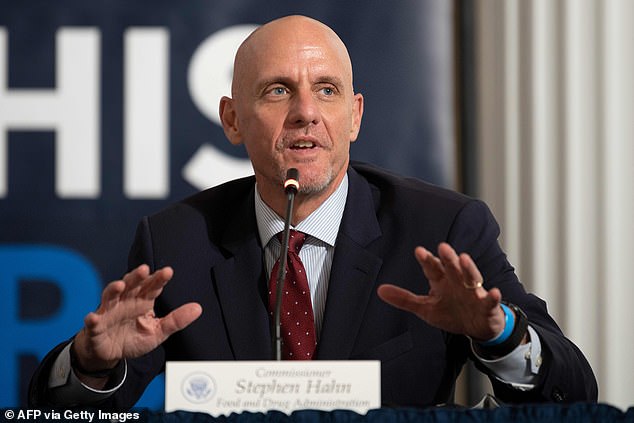 FDA Commissioner Stephen Hahn has repeatedly vowed that the agency is committed to speeding safe and effective interventions to approval, guided by science and not politics

Scientists, public health officials and lawmakers have expressed concerns that the Trump administration will pressure the FDA to authorize a COVID-19 vaccine in advance of the November presidential election, even if data from clinical trials do not support its widespread use.

Earlier this week, a top FDA official who will help decide the fate of a coronavirus vaccine has vowed to resign if the Trump administration approves a vaccine before it is shown to be safe and effective.

Peter Marks, director of the FDA’s Center for Biologics Evaluation and Research, made the statement in response to concerns raised on a conference call late last week of a vaccine working group.

Marks told Reuters he has not faced any political pressure and that the FDA would be guided by science alone.

‘I could not stand by and see something that was unsafe or ineffective that was being put through,’ he said.

‘You have to decide where your red line is, and that’s my red line. I would feel obligated [to resign] because in doing so, I would indicate to the American public that there’s something wrong.’

He added that he would equally object if someone sought political gain by holding up approval of a vaccine that was shown to work, and that was safe. 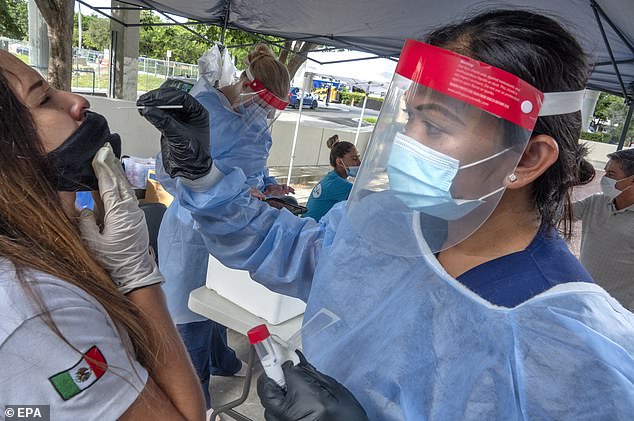 A woman (L) has her swab sample collected by a LAB24 laboratories team member for COVID-19 testing at the Mexican Consulate’s parking lot in Miami, Florida on August 15

Michael Caputo, assistant secretary for public affairs at the Department of Health and Human Services, which oversees FDA and NIH, said the government aims to identify a safe and effective vaccine by January 2021.

Speculation about the FDA approving a vaccine under political pressure ‘only undermines confidence in the public health system,’ Caputo said in a statement.

‘I’ve never met one FDA regulator who wouldn’t resign over improper pressure, and that’s how America knows their seal of approval is the gold standard.’

Trump’s approval ratings have fallen sharply in the wake of a pandemic that has killed more than 173,000 Americans and infected over 5.5 million. The race to produce a vaccine has become the centerpiece of his administration’s response.

Earlier this month, Trump said a vaccine was possible before the November 3 vote.

In a statement on Thursday, FDA Commissioner Hahn said that under Marks’ leadership, the agency’s scientists are monitoring the COVID-19 vaccine trials, ‘the data from which will be the deciding factor for any FDA approval.’

Anthony Fauci, the nation’s leading infectious disease expert, has also said publicly that political considerations will not influence any decision on a coronavirus vaccine.

Large-scale clinical trials of the leading vaccine candidates from Moderna, Pfizer and AstraZeneca were launched in recent weeks.

The FDA has scheduled a meeting of its advisory committee of outside experts on coronavirus vaccines on October 22.

Marks said the trials were enrolling volunteers ‘reasonably well’ and that it was ‘possible’ data could be available to interpret as early as October.

If not, the committee could still discuss broader regulatory issues regarding a vaccine, he said.