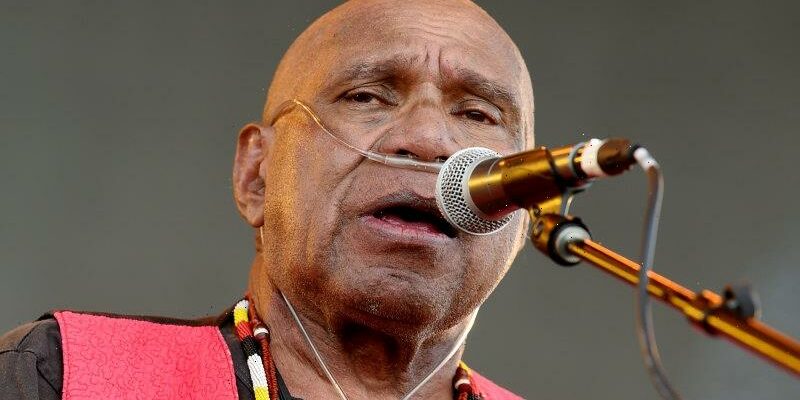 Watching from backstage at Victoria’s Port Fairy Folk Festival earlier this year, I experienced yet another transcendent Archie Roach moment. Archie was performing a set list of his latest work to a reverential audience that had overfilled the festival’s largest marquee and crammed in at its wings, craning their necks and straining to witness the legendary Gunditjmara-Bundjalung songman.

Propped on a layer of red blankets to precisely adjust the height and comfort of a barstool, and with festivalgoers enthralled by his story-telling, Archie’s voice sailed repeatedly from the frail to the robust-as-ever, often across the breadth of a single verse. It was the delivery of a remarkable performer doing powerful things. 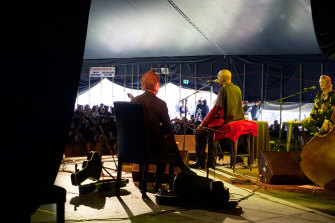 Archie Roach at what would be his last appearance at the Port Fairy Folk Festival in March.Credit:Jack Latimore

The stunning quality of his voice circa 1989, when he left people dumbstruck by his performance of Beautiful Child and Took the Children Away at the Melbourne Concert Hall, was past. But Roach was equally moving in new, clever, and brutally honest ways – working skilfully with the limitations of his breath, not attempting to obscure or partition it from his art and audience.

Earlier, I’d asked him about the decision to include his oxygen cannula in the publicity shots and cover art for his latest single and anthology: “Well, that’s who I am today,” he shrugged. “That’s the reality of the situation.”

The performance would be the artist’s last appearance at the “Folkie”, an event Roach had become synonymous with over its almost 50-year history. Most of us understood that on the day. But then again, many times over the past decade Archie Roach had proved wrong those kinds of grim assumptions.

I’d been invited down to Port Fairy by Archie and his manager and close friend Jill Shelton for the Folkie’s opening of the inaugural Archie Roach Foundation stage, and the launch of his new anthology, My Songs: 1989-2021. I’d been asked to contribute something to the liner notes, to write a short piece around Archie’s final single, One Song.

I’ve had the privilege of speaking with Archie a fair bit over the past three or four years. We’ve talked about light things and some heavy things too. From those conversations, I produced some articles, reviews, essays, videos, and podcasts: things that regarded the significance and legacy of his work. He was generous with his time. I considered him a friend and hope he viewed me as one too.

So, after anguishing over the task for too long, I wrote something for him very late one night. I sent it off to Archie, fearing it was nothing like what he wanted.

I wrote of travelling so far in one direction you arrive back at your starting point. I wrote about how, years earlier, I’d been tracing Archie’s life through the inner-city streets, following vestiges of Charcoal Lane literally and figuratively, consciously and not so consciously – the same streets and alleyways Archie once trod. The Fitzroy streets. The Collingwood streets. Archie’s own songlines contained on that landmark album of his. Archie sang them up. Sang a hidden history and broken-tooth romance into those places.

One Song is imbued with similar kinds of majesty and magic. It could be interpreted as Archie sailing full circle. The artist on his way home again to the fire hearth, or to a tranquil river flow.

One Song is sparse, stripped back – Archie’s voice generous and masterful in expression, even youthful in moments, accompanied only by a cloud shade of guitar and double bass that cycles and drifts, adding texture to light. It’s prayerful and serene. It’s a Country song, though not the genre you might expect. It’s a connection to place, a singing up of an ancient wisdom from deep time: an exquisite lullaby for humanity.

I wrote that mostly, One Song is immediately Archie: a life of weathered terrain imbued with a 65,000-year backstory. An ancient wisdom travelling at once forward and throughout the songlines and blowing along the streets. A message from the Old People to us: “Remember well what we have told you. Oh, don’t forget where you come from.”

The next afternoon, he sent word back: “It’s Deadly Jack – you got it … what can I say – it’s beautiful. That’s the gist of One Song – you got it. The ancient ones telling us to remember well what we have told you – it’s as ancient as the country itself.”

Like so many people, I’m always having those kinds of cosmic conversations with Archie, just usually at midnight, or earlier or later – in those crossover hours, where time slips.

I can listen to Charcoal Lane on loop, and the greatest song ever written about Australia can play back to back for hours. I’ll be shedding tears, shaking fists, raising fists in defiance, singing in solidarity, thinking about my Birpai mob – and yarning up with Archie.

Once, years ago, at a point when it looked like Archie was close to bowing out, I decided our Blak media newsroom should have the proper kind of obituary prepared to honour the man.

We made several starts, but the job never did get done. Nobody wanted to consider Country without Archie in it.

Indeed, the earth is a poorer place without him walking (and rolling) across it. But we all know he’d be cruising along with Ruby again now, across the special place, their Dreaming river.

And true to the extraordinary genius of Archie, he remains walking alongside us here too.

Your essential guide to the best things to see and do in and around the city. Sign up to our Culture Fix newsletter here.