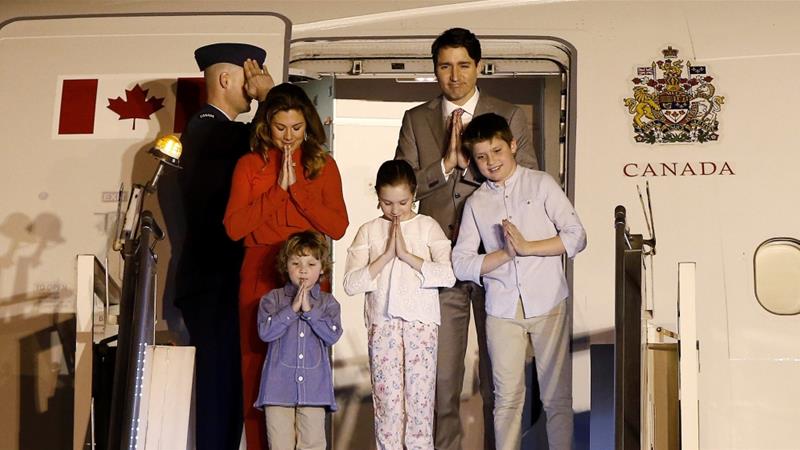 New Delhi, India – Canadian Prime Minister Justin Trudeau’s India trip that began on Saturday has been making the headlines in India for the wrong reasons.

In the past four days of his first India trip as prime minister, Trudeau has travelled to the iconic Taj Mahal, nearly 200km from the capital, New Delhi and Gujarat, home state of Prime Minister Narendra Modi, and Mumbai, but no senior government minister has met him so far.

A junior Indian minister greeted the Canadian prime minister when he landed in New Delhi accompanied by his wife and three children.

Modi has broken protocols in the past to receive guests personally, including Israeli Prime Minister Benjamin Netanyahu in January.

But the Indian prime minister, who famously hugs his guests, has not even tweeted welcoming Trudeau in a move being seen as a “snub” to the Canadian leader.

Sections of the Indian media praised Modi for his “firmness” and for being “impressively tough”.

The right-wing ruling Bharatiya Janata Party (BJP), however, denies any disrespect to the visiting leader.

“I don’t think this is any kind of snub. India values its relationship with Canada highly,” Seshadri Chari, member of the National Executive of the BJP told Al Jazeera.

Modi is scheduled to meet Trudeau on Friday.

Indian officials have accused the Trudeau government of backing Sikh separatist movement known as the Khalistani movement that seeks an independent Sikh homeland in the Indian state of Punjab.

“Over the years, the Canadian political establishment, across the spectrum (whether it is the NDP, Conservatives or Liberals) has been mollycoddling Khalistani elements. Under the Trudeau government, this has increased. He had himself appeared on a Khalistani platform in Toronto in April last year,” Vishnu Prakash, former Indian envoy to Canada, told Indian news site The Print on Monday.

Prakash, however, denied that Trudeau was being cold-shouldered, adding that “every courtesy has been extended to him”.

Balpreet Singh Boparai from the World Sikh Organisation – a non-profit outfit that claims to be working to promote and protect the interests of Canadian Sikhs – said the “snub reveals India’s insecurity with minority rights”.

“The cold reception given to Prime Minister Trudeau has been noted in Canada,” Boparai, who is based in Newmarket, Ontario, told Al Jazeera.

“Prime Minister Trudeau has been unapologetic about the Sikhs in his cabinet, once also joking that he has more Sikhs in his cabinet than Modi. It is clear that there is an insecurity about this among some in the Indian government and media who see Sikhs in positions of leadership as being inherently a threat to India. This is despite the fact that three of the four Sikh cabinet ministers have been raised in Canada and have never expressed any anti-India sentiments,” he added.

‘The spectre of Sikh separatism’

Amarinder Singh, the top elected official in Punjab – a state with majority Sikh population – had earlier alleged that Canada’s Sikh communities are a “hotbed of separatists”.

In April last year, Singh had said that Canadian Defence Minister Harjit Sajjan, who is also accompanying Trudeau on this trip, was a Khalistani sympathiser.

Former Indian Prime Minister Indira Gandhi was assassinated by her Sikh bodyguards in 1984 over the Indian army’s storming of the holiest Sikh shrine, the Golden Temple, to crush the separatist movement.

Members of Sikh community in Canada were convicted for the 1985 bombing of an Air India flight, which killed 329 people.

Punjab leader Amarinder Singh is scheduled to meet Trudeau on Wednesday in Amritsar, home to the Golden Temple, although it is yet unclear whether the members of his cabinet will be part of the talks.

The spectre of Sikh separatism and alleged Canadian state support hangs heavy over the trip that is meant to strengthen business and defence ties between the two countries. 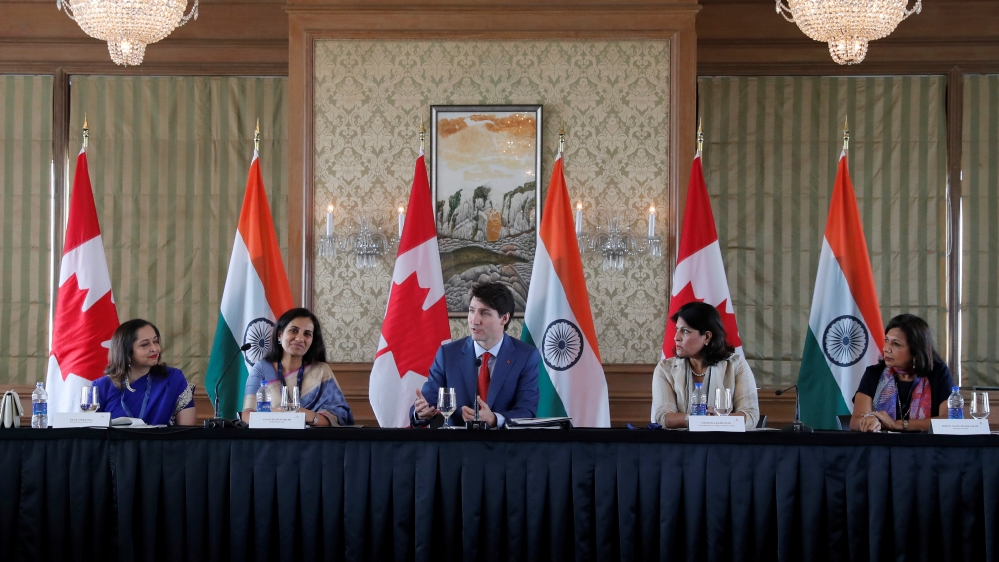 Bharat Karnad, national security expert at the Centre for Policy Research, says the downplaying of Trudeau’s visit is a direct fallout of Canada’s inaction on “so-called Sikh radicalism”.

“If the demand for Khalistan – all but extinguished elsewhere – continues to play big in Canada, and Ottawa is seen to be doing nothing much to dissuade Canadian Sikhs from so roiling bilateral relations with a friendly India, then what is Delhi to do? It can, as has happened, play down the Canadian PM’s visit,” Karnad told Al Jazeera.

Trudeau while speaking in the Indian city of Ahmedabad said Canada “recognised and supported a united India”, dismissing the allegations that his country supported separatist forces.

“… I think part of Canada’s strength is that we recognise that diversity is a strength and a wide range of opinions and views are an important part of the success of Canada.”

Boparai from the World Sikh Organisation said the Indian allegations are “baseless” and have never been “substantiated with actual evidence”.

“India has trouble accepting criticism from minority groups and tends to label calls for accountability “anti-national” or “extremist”.

“As a democracy, India must realise that human rights are critical and cannot be dismissed by trying to malign or marginalise those seeking justice,” he said.

The arrest and detention of Jagtar Singh Johal, a Scottish Sikh activist associated with justice for the 1984 anti-Sikh riots in November last year, has also created a storm among the Sikh diaspora who have campaigned for his release. Johal is being investigated for conspiracy to murder prominent right-wing Hindu leaders.

Activist and lawyer HS Phoolka, who has fought a long campaign to bring those accused of killing Sikhs in the 1984 massacres to justice, says these allegations against the Trudeau administration are false.

“Maybe what is upsetting them is the Canadian parliament’s use of the term genocide to describe mass killings of Sikhs in India in 1984. They were calling a spade a spade – that’s probably what has upset the Indian foreign ministry which called this episode an embarrassment,” Phoolka told Al Jazeera.

Phoolka was referring to a motion by the Ontario legislative body last year condemning the 1984 anti-Sikh riots in India as a “genocide”. The move had angered New Delhi as it was preceded by debates on “intolerance” in India.

New Delhi-based political analyst Krishan Pratap Singh says “the Khalistan issue is a red herring” to divert attention from the main issue, which is a complete lack of personal and political chemistry between Prime Minister Modi and his Canadian counterpart.