This is the moment one of Malaysia’s ‘most well-trodden walkways’ was written off when a 16-wheeler lorry smashed into the 16ft-high bridge.

CCTV footage shows the huge lorry trundling through Penang last week on its approach to the 45-year-old Weld Quay bridge by the ferry terminal.

The cab passes safety under the bridge, but the the tip of the crane on its trailer catches the huge steel structure and starts to tear it sideways, bending some of the supports.

The driver rams on the brakes and brings traffic to a standstill, but the damage is done.

Fire crews rushed to the scene to prevent one of the most-recognised walkways in the former British colony from collapsing.

Although Penang state mayor Datuk Yew Tung Seang said authorities would attempt to salvage the bridge, the next day it was deemed beyond repair.

The mayor called the bridge’s destruction ‘sad’ and described the walkway as a ‘part of the landscape’ and a ‘historical monument’. 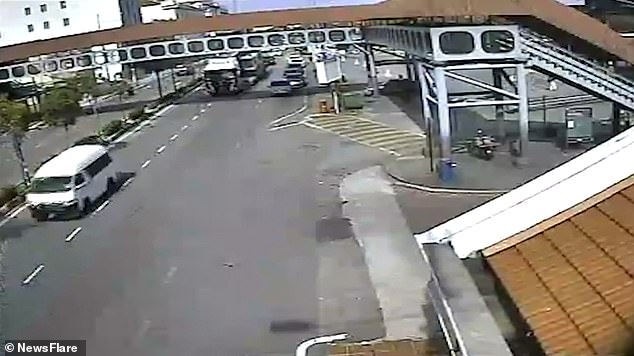 CCTV footage shows the huge lorry on its approach to the 16ft-high bridge, which is close to the city’s ferry terminal

Now the accident is under investigation by Malay police, who will determined whether or not to bring charges against the truck driver.

A representative from the state council, Jagdeep Singh Deo, said the body are considering suing the truck company on the basis of ‘people’s feelings’.