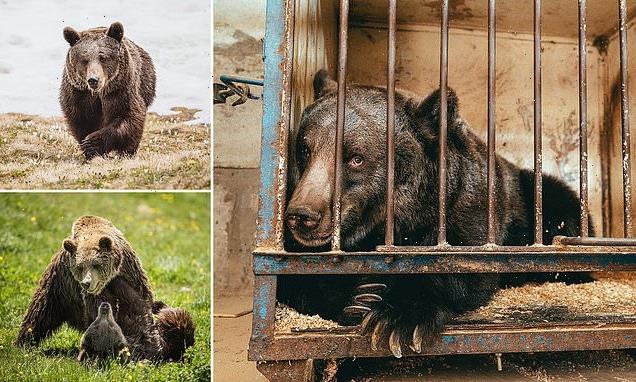 Tragic story of the ‘world’s loneliest bear’: Jambolina spent more than a decade alone in a circus cage without ever seeing another of her kind… before finally spending her last few months at a Swiss sanctuary

After 12 long years trapped behind bars in brutal captivity, Jambolina was finally given a taste of freedom in May last year when she was able to bound joyously over the luscious Swiss Alps.

But relief for the campaigners, who had fought for years for the release of the so-called ‘World’s Loneliest Bear’, quickly turned to heartbreak when she died just two months later.

Haunting photos of the caged European brown bear looking forlornly between the narrow metal bars of her tiny enclosure had sparked an outpouring of fury at the appalling conditions she was kept in.

The life-long circus performer was only ever wheeled out from her filthy prison to perform tricks to adoring crowds in Ukraine, never even meeting another one of her own kind.

Jambolina’s harrowing tale so moved animal campaigners that they desperately battled with the Ukrainian circus to demand her release from the squalor and degradation.

When Covid swept across the world, billions were confined to their homes but the pandemic suddenly gave Jambolina a shot at freedom.

The rampaging virus halted circus performances and zoo bosses finally caved in and unlocked her cage, bringing an end to her torturous 12-year sentence.

But tragically, Jambolina was only able to enjoy a few weeks of unimpeded bliss in the Swiss Alps when she died suddenly during a routine operation. 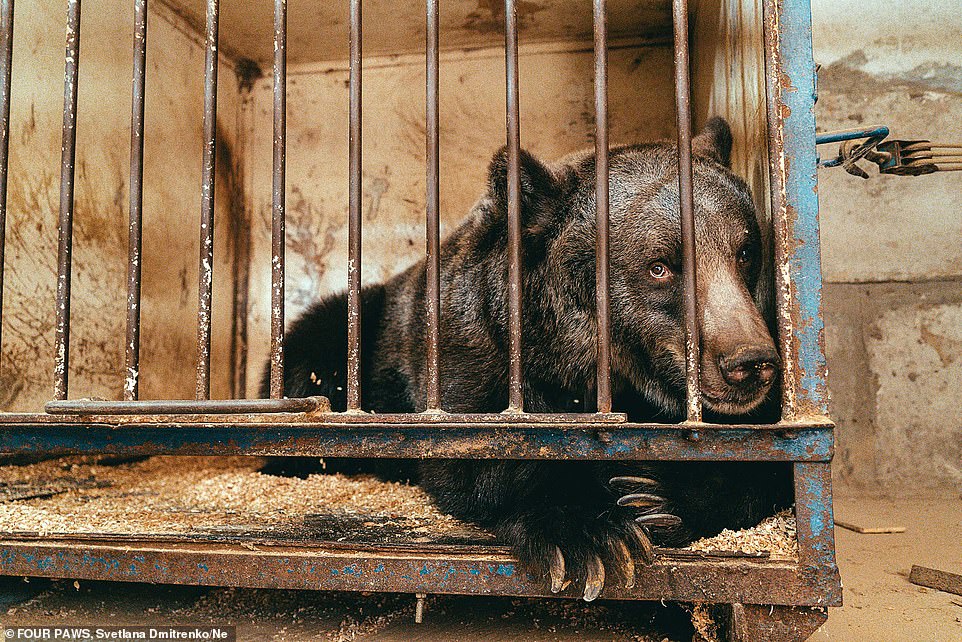 Jambolina, a 12-year-old European brown bear, lived for more than a decade inside this cage at a Ukrainian circus before being rescued and taken to a Swiss Alps reserve

Jambolina’s sad story began at just a few weeks old, when the tragic European brown bear was born to captive bears kept on display at a Crimean zoo.  She was immediately taken away from her parents and sold to a circus.

The growing bear was imprisoned in a small cage and trained to perform tricks, using methods that campaigners say amount to torture.

Private ownership of bears in Ukraine is possible as long as they are not captured in the wild and are cubs from bears already in captivity.

Cages are required to be a minimum of 322sqft (30 square metres) and 10ft (three metres) high but there is little monitoring or punishment for breaches of the regulations.

She never saw another bear or was allowed to engage in any natural behaviour.

While she delighted crowds everywhere she went, she also horrified animal lovers around the world concerned for her welfare. 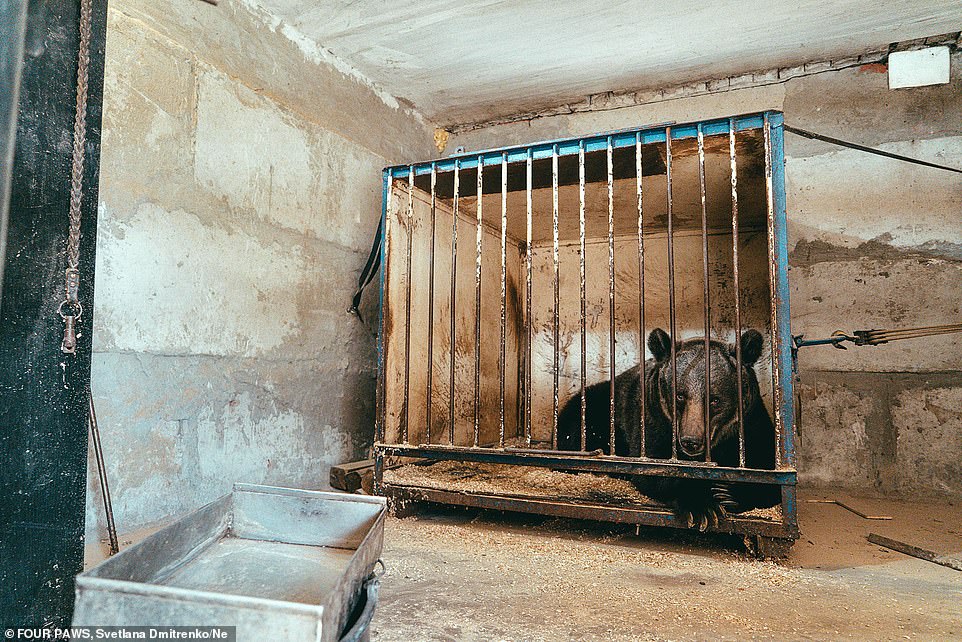 Jambolina’s sad story began at just a few weeks old, when the tragic European brown bear was born to captive bears kept on display at a Crimean zoo 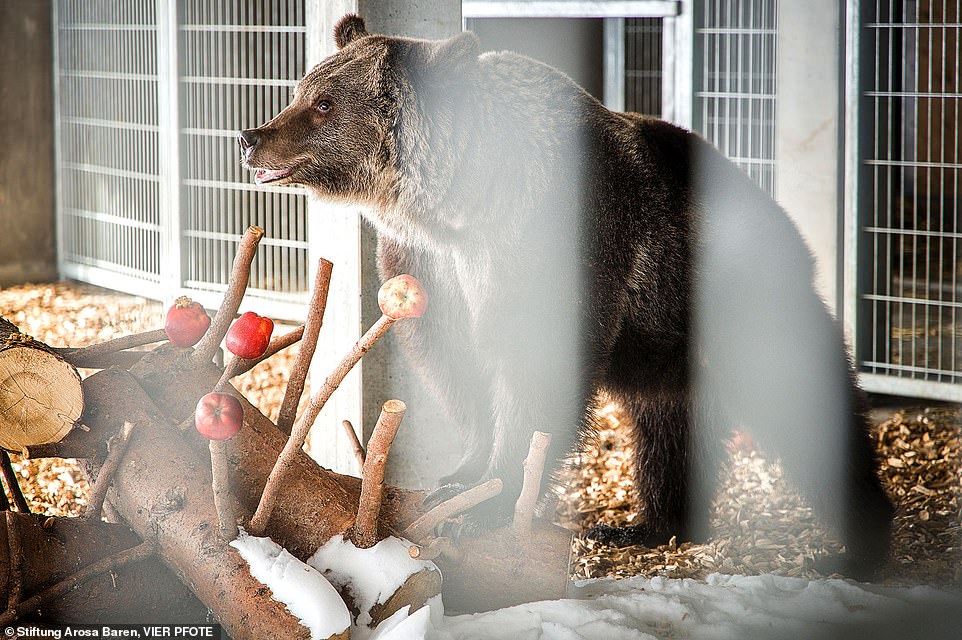 Jambolina is pictured early after her arrival at the bear sanctuary, adjusting to her new conditions inside an enclosure before being allowed to roam around outside

However, all that changed with the arrival of the Covid pandemic which meant the circus could no longer stage performances.

Unable to earn money, Jambolina’s owner was forced to get rid of her because he could not afford to feed and care for her.

Four Paws animal charity agreed to rescue the bear, and on December 8, 2021, she was sedated and loaded into a crate so she could be taken to Switzerland.

The owner had said by this point, Jambolina could hardly move at all and suffered from lack of exercise and boredom, and asked the charity to give her a ‘a good life’.

It took four days to move her more than 1,500 miles to the Swiss Alps, where she was given a new home at the Arosa Bear Land sanctuary.

Katharina Braun from Four Paws International said: ‘She was kept alone in a tiny cage and had been since she was a cub. She was not with other bears.’

Four Paws’ Barbara van Genne said: ‘Transporting a bear across four national and two EU borders is a big challenge, even more so in COVID-19 times. 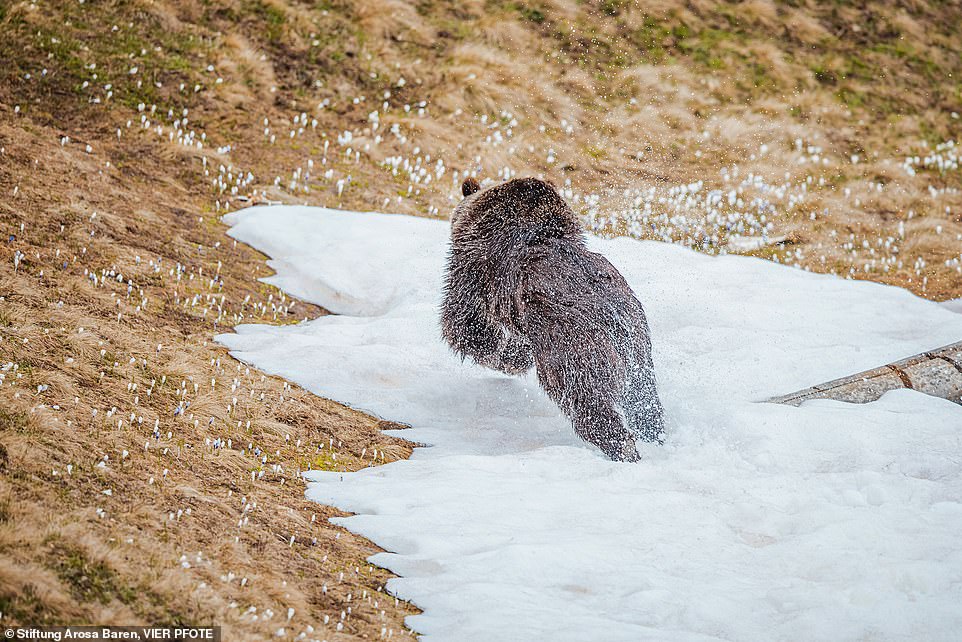 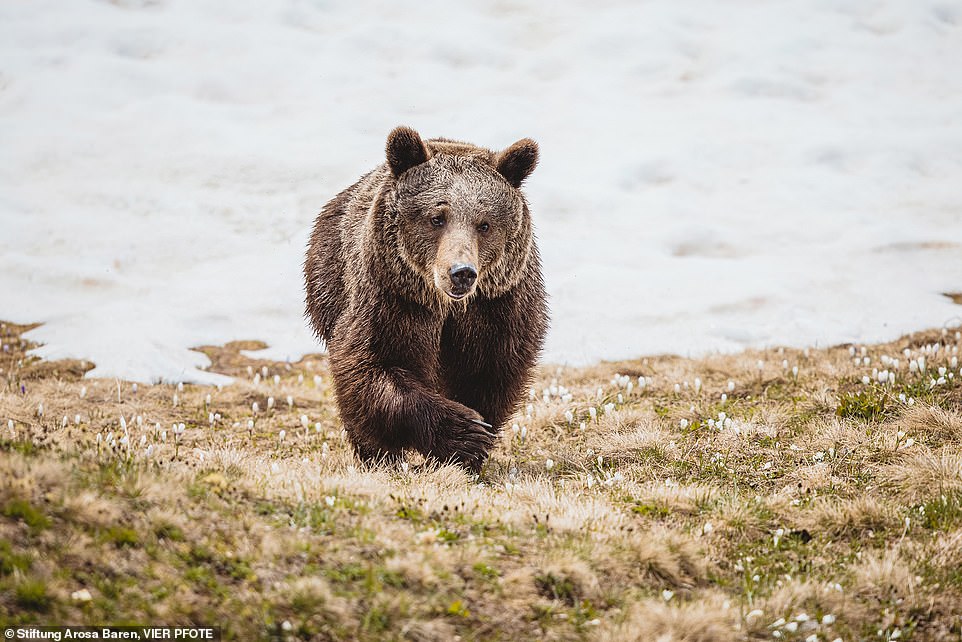 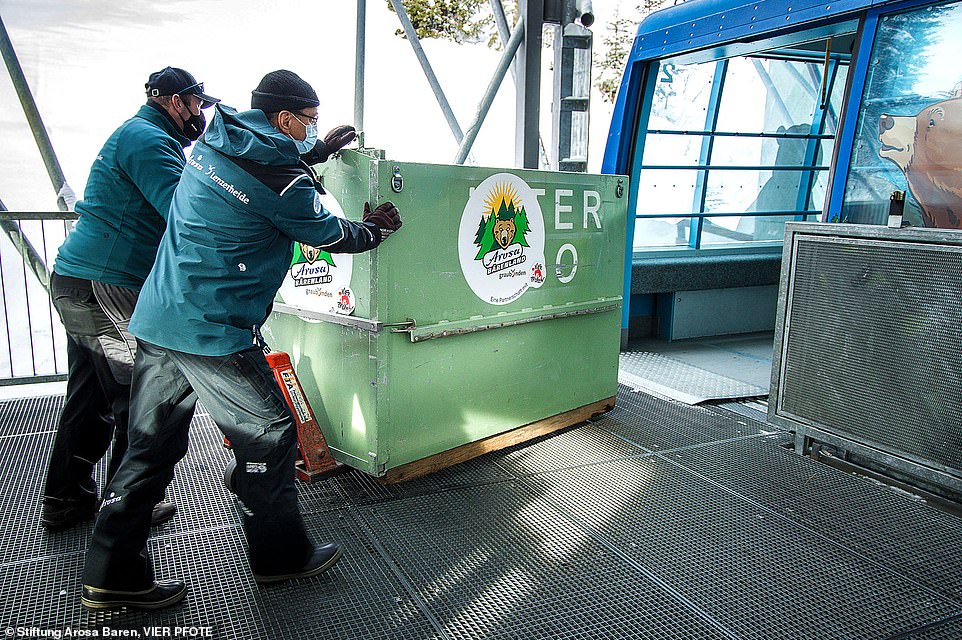 It had taken animal rescuers four days to transport Jambolina the 1,500 miles from captivity to the bear sanctuary – but in the end she lived there for just a few months before dying

‘We had to ensure Jambolina’s wellbeing at all times while a lot of paperwork and controls were needed for the logistical part of the transfer.’

Despite having never hibernated in captivity, Jambolina’s natural instincts quickly kicked in in Switzerland and she settled down for her first-ever winter nap in December, 2021.

After waking in May last year, she took her first nervous steps and was introduced to the first bear companion she had ever known – a male called Meimo who also lived on the reserve since being rescued from captivity in the Albanian city of Shkodra in February 2019.

Scientific director of the Arosa Bear Land Dr Hans Schmid said: ‘We expected this behaviour and it is completely natural. Scepticism is an important survival strategy for animals and humans.’

But after making a few hesitant steps and sniffing the outdoor environment, Jambolina headed towards the pond and took a long bath.

She was then pictured playing with a male bear called Meimo who also lived on the reserve since being rescued from captivity in the Albanian city of Shkodra in February 2019. 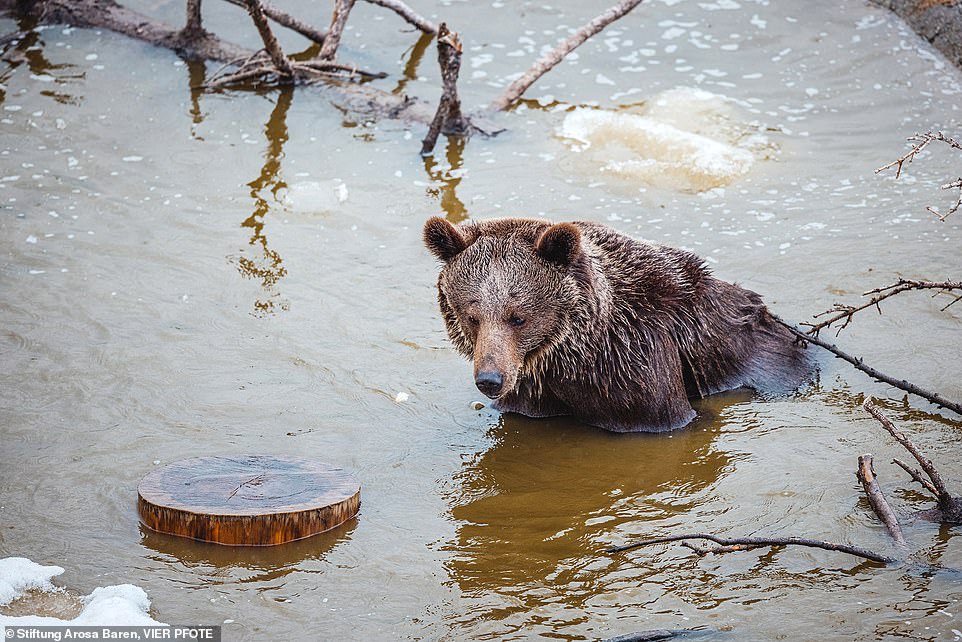 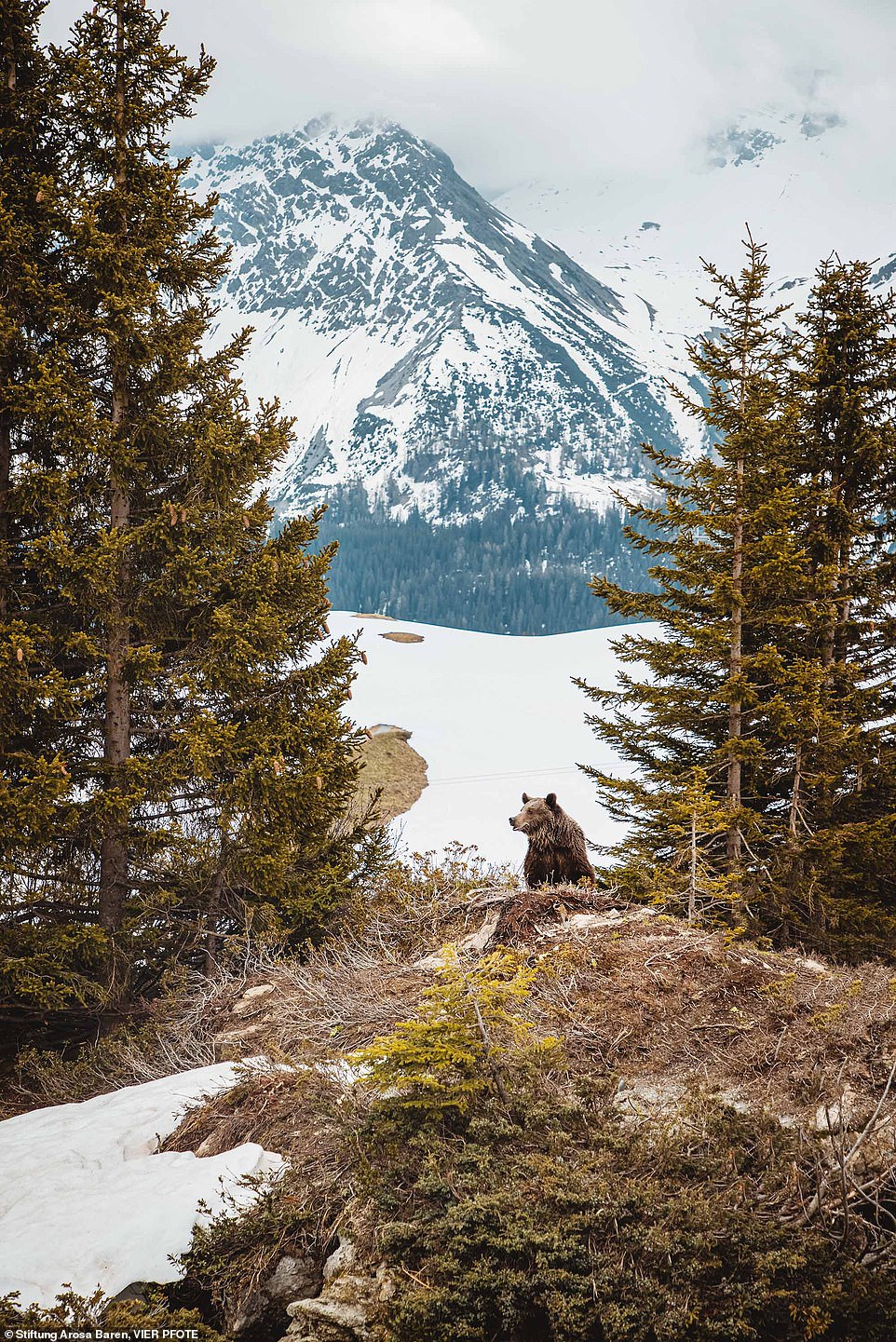 Jambolina was rescued by animal rights organisation Four Paws, whose staff rescued her from her cage in Ukraine

After their combat, Jambolina laid on her back which according to experts meant she felt comfortable with the new situation as the two bears then treated themselves to a bath.

The animal keepers described Jambolina as brave and clever and said: ‘We are not surprised by Jambolina’s behaviour and we are very pleased that she could find her way around the outdoor area after a short time.’

Four Paws Country Manager in Switzerland Alexandra Mandoki said: ‘Moments like this give me goosebumps and it’s just incredibly beautiful to see how we can give the bears a new life.’

To ensure the pair would not breed, staff needed to have Jambolina sterilised and also needed to carry out a dental reconstruction to undo years of damage caused in captivity, which would allow her to live a full life.

A team of experienced vets was assembled for the task, and on August 5 they sedated Jambolina to carry out the routine procedures. 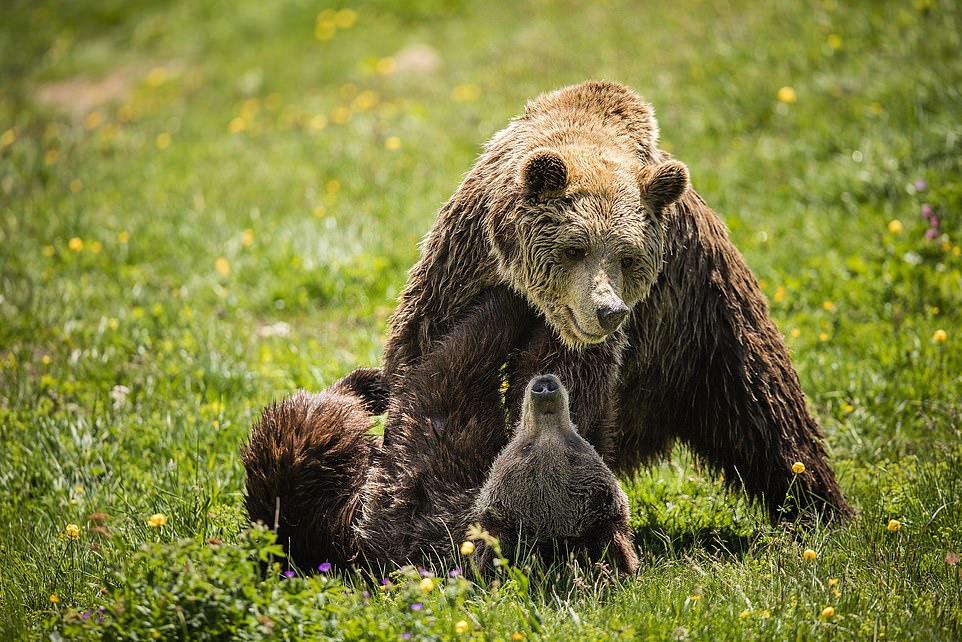 After waking up, she was introduced to her first ever bear companion – a male named Meimo (pictured, the pair playing together in spring last year) 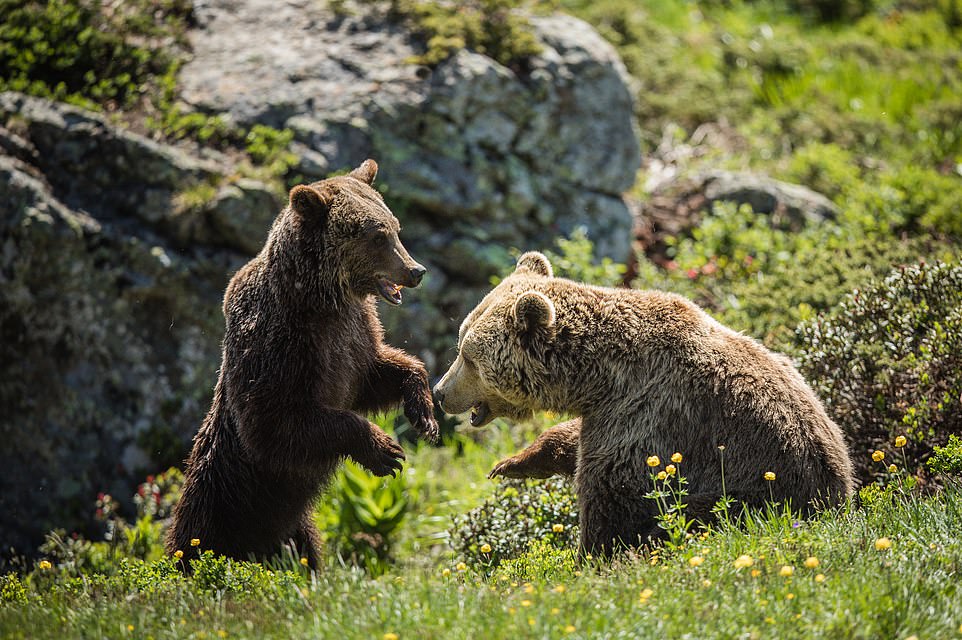 Animal behaviour specialists at the Swiss sanctuary said Jambolina and Meimo quickly began play-fighting, which is a normal social activity for a bear and shows that the pair are bonding 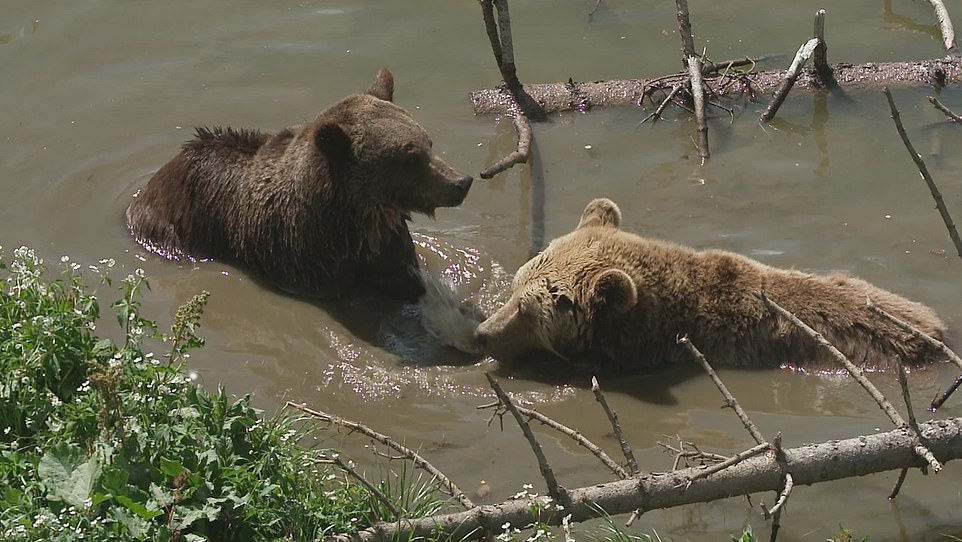 Jambolina and Meimo are pictured bathing together at the sanctuary, with experts saying the two had bonded well before Jambolina tragically died in this week 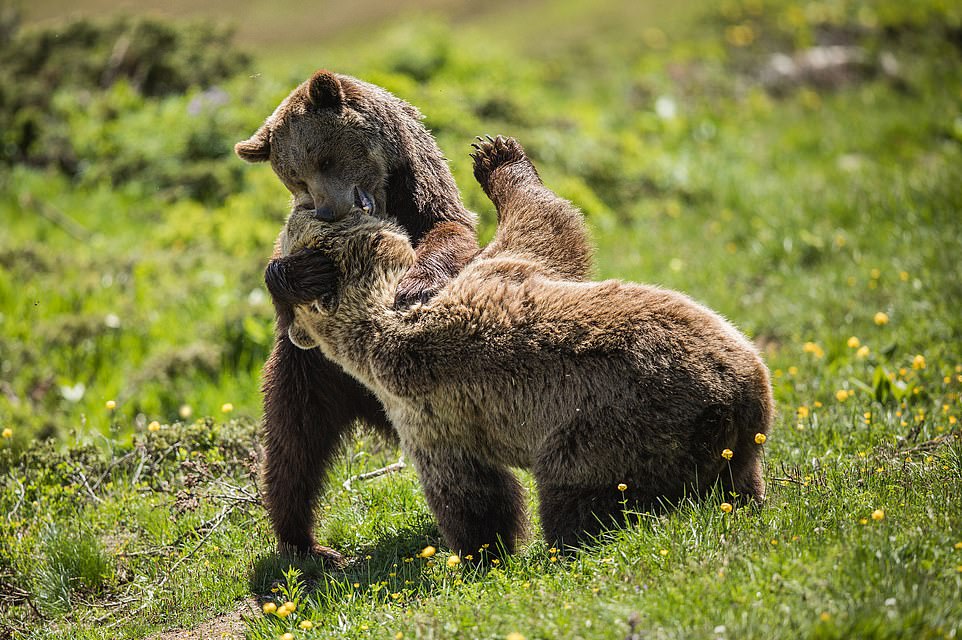 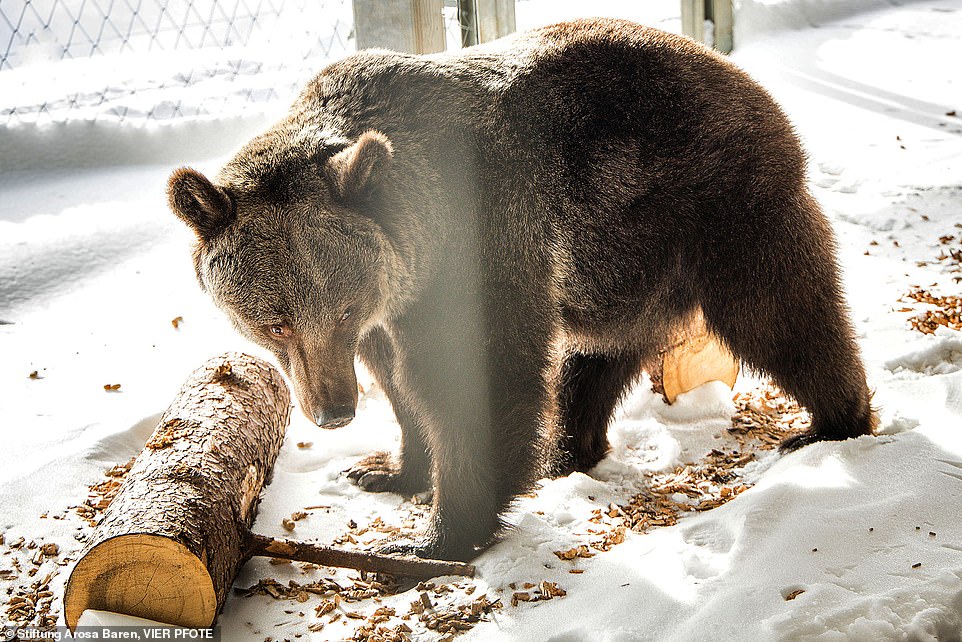 On August 5, vets had sedated Jambolina to carry out routine surgery and dental reconstruction when she suddenly stopped breathing and could not be revived

However, shortly after being given an anesthetic, Jambolina stopped breathing and medics were unable to revive her.

‘It is with heavy hearts and deepest sadness that we have to inform you that Jambolina suddenly and unexpectedly passed away,’ a spokesman for animal charity Four Paws wrote on social media.

‘Shortly after Jambolina received her anaesthetic injection, her breathing stopped for reasons that are still unknown.

‘Despite all efforts to resuscitate her, she unfortunately passed away. We are currently investigating what caused Jambolina’s death.’